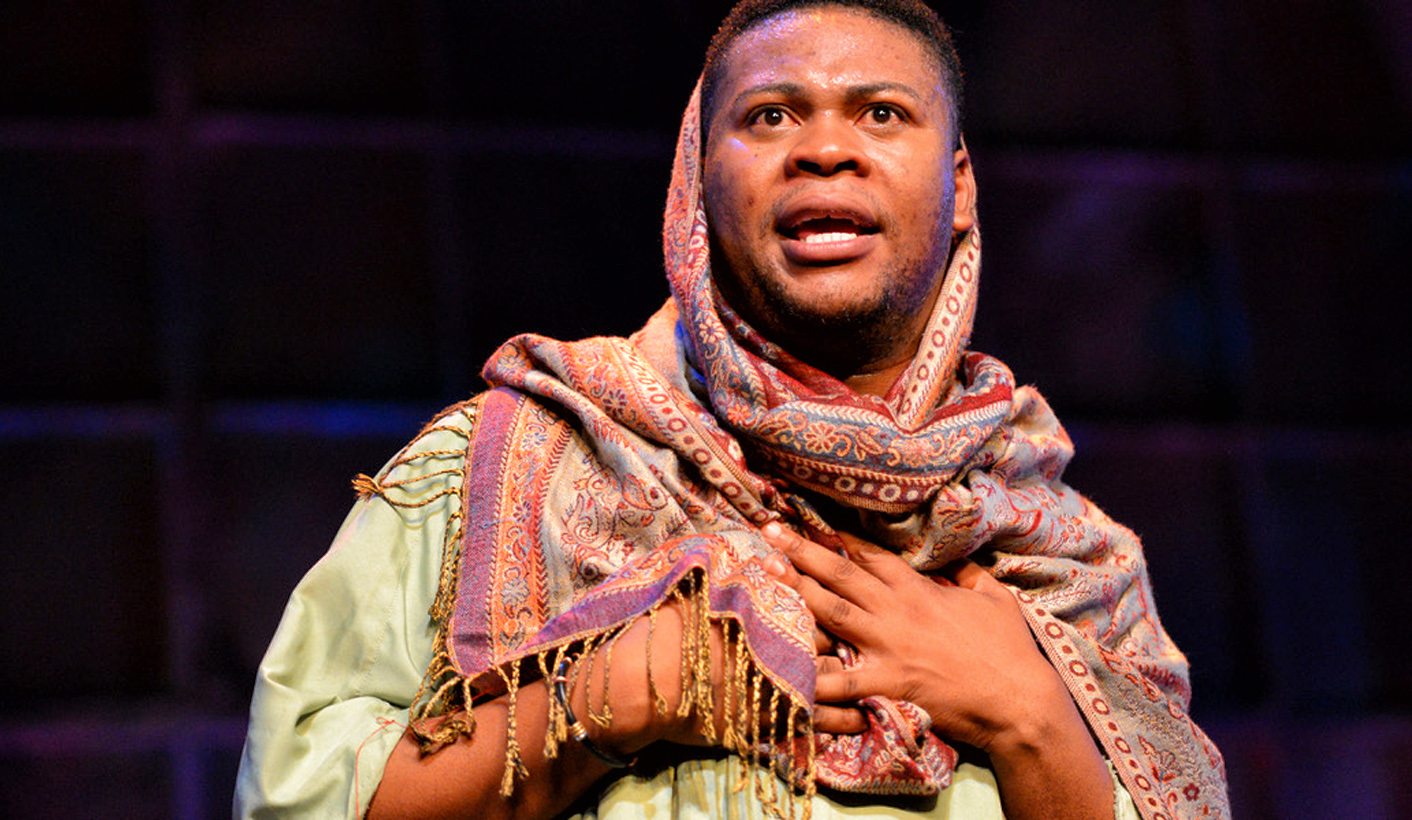 You don’t have to be religious, thank God, to find yourself enjoying this play about Jesus. Not when the script of The Man Jesus is more of a cleverly constructed whodunnit, or whydunnit, than a paean to Christianity. By LESLEY STONES.

It’s set 2,000 years ago when Jesus was roaming Palestine gathering his disciples and upsetting the authorities. We never meet the man himself, but his presence is conjured up on stage as various people who knew him talk to him and about him.

The play was written by Matthew Hurt, a South African whose work has been produced in Europe, the US and Australia. It’s a clever and engaging piece, well researched and solidly constructed.

The script is intelligent and nicely lyrical, and here with Lebo Toko as the solo actor it’s delivered with outstanding skill. Initially his style feels overly dramatic, then it becomes captivating, and a less flamboyant approach could allow the play to pall as it runs beyond 90 minutes.

Even way back then Palestine was in a complex situation, but if your religious and historical knowledge is a little ropey, there’s just about enough background quickly built into the story for you to grasp the politics of the time. The land was under harsh Roman rule, and the masses following Jesus as he spoke yearned for this charismatic leader to march them on to political, rather than religious, independence.

Director Robert Whitehead sets a cracking pace and has Toko weave in some South African twists and local patois – it’s not at all necessary, but it’s sweet and fun and helps the audience relate to the story being told.

Toko is a joy to watch, with a range of voices, mannerisms and moods that bring this gallery of Galileans to life. He’s shy but strong as Mary, the pregnant mother of Jesus, then beguiling as Joanna, a wealthy woman who is healed by Jesus and joins his followers. He’s smug and hedonistically self-satisfied as Herod Antipas, the louche ruler of Galilee, lounging on his side and issuing commands.

Each character has its own personality, and with a flick of his robe or a brief disappearance behind the scenery, another emerges. The scarf ought to draw a salary of its own, twisting into a veil, a headdress, a belt and even a noose to help signify the different players.

Toko’s warmth and talent plus the snippets of local lingo enhance the humour in the script. At one stage he has the streetwise Judas – who in this rendition you’d encounter in the seedier streets of Durban – explaining the origin of the word politics. It comes from poly, meaning many, and ticks, meaning blood sucking parasites, he says. Nothing’s changed in 2,000 years, then.

Good sound effects and music composed by João Renato Orecchia Zúñiga add to the atmosphere, while the simple set by Noluthando Lobese has background shelves that become doorways for scene changes. The entire stage has been raised on wooden pallets, which even adds the smell of timber to the carpentry workshop where some of the scenes occur.

The Man Jesus won’t change your views about who he was or wasn’t, but it’s a compelling piece of theatre. DM

The Man Jesus runs at the Market Theatre until 5 November. Book at Webtickets.