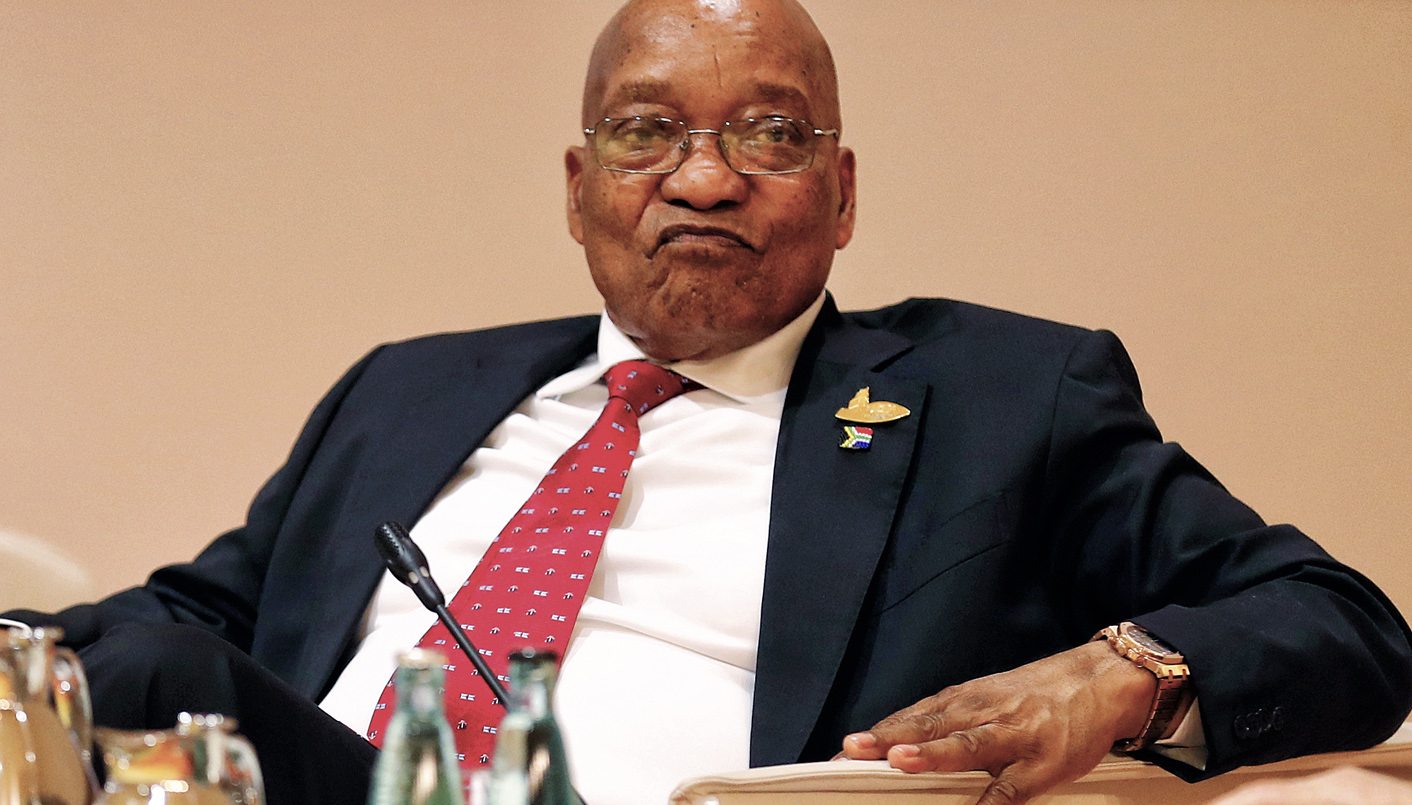 In one fell swoop President Jacob Zuma rid himself of a political critic and appointed a close ally to a key portfolio in Tuesday’s Cabinet reshuffle. From across the political spectrum, organised labour and business, came sharp criticism that this latest change, some seven months after the previous reshuffle, in no way contributed to better governance in these troubled economic times dominated by State Capture. But there’s a crucial ANC national elective conference in less than 60 days and Zuma, a shrewd political operator, is playing the long game. And he’s proven in the past that he doesn’t care about anyone else. By MARIANNE MERTEN.

President Jacob Zuma was in Limpopo on Tuesday to open three Botlokwa bridges across the N1 highway. It was a security-heavy occasion, replete with red ribbon, so the President could take on the role of deliverer of people’s needs. “The bridges that we are officially opening are a visible example of government’s commitment to deliver strategic infrastructure that will transform our economy, create jobs and stimulate opportunities for growth… This project demonstrates the fact that government responds to the needs expressed by communities and the priorities they identify,” said Zuma’s prepared speech.

But bridges of a political type were burning. The South African Communist Party (SACP) described the dropping of its leader Blade Nzimande from Cabinet as a “factional removal” and “a clear declaration of war”.

The SACP stopped short of announcing a walk-out by its other ministers and deputy ministers. That would be discussed at an urgent top structure meeting, and for now the current position remained, said SACP First Deputy General Secretary Solly Mapaila: “We decided they must remain where they are and serve the interest of society, not Zuma.”

The argument goes something like this: as part of the tripartite alliance with the ANC and labour federation Cosatu, the SACP fought in the electoral trenches to secure an ANC win. Therefore, it has a place in government, and access to its strategic levers of power, as part of the governing collective. Cabinet does not belong to any individual, nor did government, was Tuesday’s refrain, amid teeth gritted in anger, at the SACP media briefing.

And while Zuma has thrown down the political gauntlet to the SACP with his changes to the executive, it remains to be seen if the party would be the first within the ANC-led alliance to have the gumption not to be browbeaten back into line.

While the ANC top six officials were informed of Tuesday’s Cabinet reshuffle, and Cosatu indicated it had received “a courtesy call”, the SACP was left out in the cold. All had been caught off guard in the controversial March midnight reshuffle, which saw insider Malusi Gigaba replace the widely and well respected Pravin Gordhan in the finance portfolio. When Deputy President Cyril Ramaphosa, ANC Secretary-General Gwede Mantashe and ANC Treasurer Zweli Mkhize publicly expressed misgivings at being presented a list of names, a fait accompli, they were pulled back into line.

And that’s how it has been in the ANC and its alliance partners: Zuma has done as he saw fit.

Most recently this was Zuma effectively over-ruling the decision of two ANC NECs that the KwaZulu-Natal executive should not appeal the court judgment that found invalid the 2015 provincial ANC conference that elected it. Last year it was the ANC’s top echelon’s acceptance of Zuma’s (non)-apology on 1 April for the “frustration and confusion” caused by the Nkandla saga – and deciding its best course of action was to explain to ANC structures countrywide that with the court-ordered repayment after over three years’ of public outcry for the non-security benefits of cattle kraal, swimming (fire) pool, amphitheatre and chicken run, the drama was now a closed chapter.

In April 2014 Nzimande, then still a vocal supporter of Zuma as the SACP has been since the run-up to the 2007 Polokwane ANC national conference which elected him party president, said Nkandla was nothing but “white people’s lies”. Now Nzimande has been thrown under the bus, perhaps as a warning to others in the now loudly critical SACP of what might befall them. It’s both a caution and a dare amid the factional battles that have paralysed many, not only in their political life, but also in governance.

Those who remain loyal stay in place regardless of their poor track record in government marred by controversy, irregular expenditure and mismanagement – be it Water and Sanitation Minister Nomvula “Mama Action” Mokonyane, whose department incurred a qualified audit opinion amid its irregular expenditure, Social Development Minister Bathabile Dlamini, under whose reign the South African Social Security Agency (Sassa) has lurched from one crisis to another, or Mineral Resources Minister Mosebenzi Zwane, whose attitude to the Mining Charter has markedly chilled relations with the mining industry.

Or David Mahlobo, the State Security turned Energy Minister in Tuesday’s Cabinet reshuffle, despite his public claim at the July ANC national policy conference that State Security had known about ructions in Vuwani, Limpopo, a year before 27 schools were burnt down amid community protests over municipal demarcation.

Mahlobo is close to Zuma. He frequently travels with the president abroad, including most recently to Russia. Mahlobo’s regime change rhetoric has been enthusiastically adopted by Zuma, even to defend his not stepping down after the ANC NEC twice since November 2016 discussed this in the wake of mounting State Capture claims in the tens of thousands of #GuptaLeaks. And so Zuma explained to the ANC integrity committee that he could not step down as this would realise the push by Western imperialist forces. Or as City Press quoted from the ANC integrity committee’s report dated May 2017 after meeting Zuma: “The essence of the president’s refusal to resign is his belief that there exists a conspiracy by Western governments to oust him as president of the ANC and of the country. Their objective is to replace him in order to capture the ANC.”

And so Mahlobo on Tuesday emerged as the one to bring about the nuclear build programme, much desired by the Zuma administration, but yet to be realised. Earlier in 2017 the Western Cape High Court set aside a series of inter-governmental agreements, including one with Russia, that were meant to be the basis for securing the nuclear deal. Then energy minister Mmamoloko Kubayi decided not to appeal, in stark contrast to many of her Cabinet colleagues who appeal adverse findings in search of a favourable outcome. Kubayi on Tuesday became the second energy minister to have fallen because of non-delivery of that deal, after her predecessor Tina Joemat-Pettersson. But she stayed in Cabinet and is now in charge of communications, previously headed by Ayanda Dlodlo, an outsider in the dominant factions who failed to deliver a pliant public broadcaster.

The recent moves to clean up governance and finances at the public broadcaster – Parliament’s communications committee took a decidedly independent turn during the interviews – came undone when Zuma let three weeks pass before appointing the new board.

By law, it is Parliament that nominates the board members for appointment by the President, who decides the incumbents of board chairperson and deputy.

This Zuma did, also on Tuesday, scorning businesswoman Khanyisile Kweyama and veteran journalist Mathatha Tsedu, the chairperson and deputy chairperson of the interim board which cancelled the business breakfasts of New Age, once owned by the Guptas, and dismissed Hlaudi Motsoeneng.

Zuma’s choices? As chairperson, Bongumusa Makhathini, and as deputy, Febe Potgieter-Gqubule, whose political connectivity to the president has been raised by, among others, DA MP Phumzile Van Damme. “… Makhathini is also the chairman of a foundation run by one of President Zuma’s wives, Bongi Ngema-Zuma. His proximity to the Zuma family is a concern,” said Van Damme, adding that Potgieter-Gqubule in the parliamentary interviews “even admitted that there is a possibility that she would resign from the SABC board if she is elected to the ANC NEC”.

The delay in appointing the SABC board was dressed in the need for due diligence, as presidential constitutional prerogatives are cited with regard to Cabinet reshuffles. But these are technicist, ticking-the-boxes explanations that ignore long-standing consultative traditions, but instead offer Zuma loyalists, and the broader ANC caught in factional battles, an exculpatory way out from tackling the elephant in the room: how one politician has captured Africa’s oldest liberation movement, the ANC. To date the ANC has carried the cost, including losing Johannesburg, Tshwane and Nelson Mandela Bay metros in the 2016 local government elections which saw is support margins also reduced elsewhere, and its own diagnostic that the governing party is associated in the public mind with corruption and State Capture.

It will come to a head, though not necessarily to an end, at the ANC December national elective conference. Worst-case scenario for Zuma would be a win by the grouping looking for change, largely associated with Cyril Ramaphosa. There are already calls that if that happens, Zuma should also receive his marching orders from the Union Buildings. And that would mean Tuesday’s Cabinet reshuffle clearly aimed at strengthening his hand may have been a distraction.

But the long game is on. It could be a straightforward win for Nkosazana Dlamini Zuma, even if she has been battling her association with Zuma. Or it could be the possibility of Dlamini Zuma being a decoy in the intricate chess game to pave the way for a win for Zweli Mhkize, the much touted “unity candidate” who appears to be backed by a long-time Zuma supporter, Mpumalanga ANC chairperson and Premier David “DD” Mabuza. And then concerns that Zuma may be recalled as the country’s president some 18 months before the end of his term may be abated – and Tuesday’s Cabinet reshuffle would allow follow-through on the nuclear deal, alongside a possible delay in the public protector’s State Capture commission of inquiry in a series of court appeals.

Tuesday’s reshuffle was not strictly necessary: the only vacancy was that of deputy higher education minister, following Mduduzi Manana’s resignation as he plead guilty to assaulting women in court. But Zuma took the opportunity to strengthen his hand as President both of the party and state. There may be more to come.

And that is vintage Zuma, even if South Africa, and the ANC, comes off second best – with many a bridge left to be rebuilt, maybe, at some later stage. DM