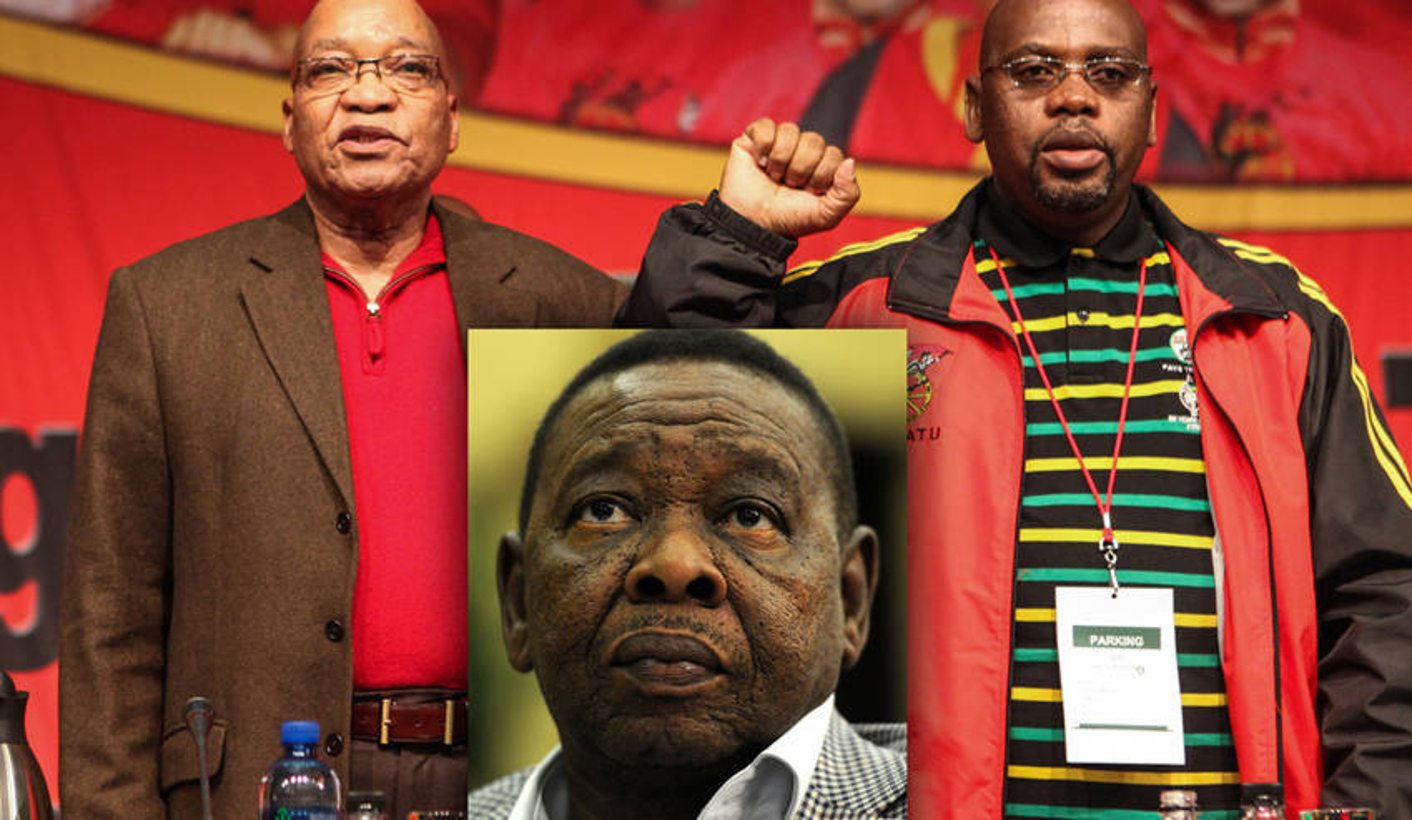 President Jacob Zuma’s latest Cabinet reshuffle announced on Tuesday morning raised hackles across the political landscape, with the South African Communist Party (SACP) proclaiming the death throes of its alliance with the ANC and labour federation Cosatu. Reaction was fast and furious, largely describing the moves in the National Executive as a Presidential high stakes chess manoeuvre to strengthen his hand and to, as South African Federation of Trade Union (SAFTU) leader Zwelinzima Vavi put it, strengthen South Africa’s “kleptocratic democracy”. By MARIANNE MERTEN.

As the rand lost value, again, on news of the second Cabinet reshuffle in less than seven months, few in South Africa’s political landscape even pretended the moves were intended to improve governance, or policy certainty. The Cabinet reshuffle was announced without the traditional consultations across the alliance between the ANC, South African Communist Party (SACP) and labour federation Cosatu, in a replay of the March midnight reshuffle.

The shifting of at least three ministers can be linked to portfolio control which is key to the President Jacob Zuma’s administration: communications, including the SABC which some circles of the governing ANC see as an important tool in winning the hearts and minds of South Africans; and energy, where the controversial push for a nuclear build programme, and the potential for scores of tenders, remains on the agenda despite the official line of going nuclear according to the pace and spending South Africa could afford. And then there was the political punishment.

The SACP was most vociferous on Tuesday, but it stopped short of announcing a walk-out from the executive at an urgent media briefing broadcast on eNCA following the removal of its leader, Blade Nzimande, as Higher Education Minister.

SACP First Deputy General Secretary Solly Mapaila said an urgent Politburo meeting would be convened to discuss the matter. “At the current time, we decided they must remain where they are and serve the interest of society, not Zuma,” said Mapaila. However, he described Zuma’s Cabinet reshuffle, without consultation, as “a clear declaration of war on the SACP”.

Earlier, the SACP in a statement described Nzimande’s dropping from Cabinet as a  “factional removal”, without consultation. “(T)his is not a reshuffle but the targeted removal of Comrade Blade as a direct attack on the SACP,” it said in a statement shortly after the Presidency announced the changes to the national executive.

“Ordinarily the aim of any Cabinet reshuffle must be to strengthen the capacity of the state. But in this case that is not the intention, especially with the retention of so many deadwoods and compromised individuals in Cabinet.”

Dropping Nzimande from Cabinet – although other SACP ministers and deputy ministers remain – comes after months of the party stepping up its calls for Zuma’s stepping down from office, stinging criticism of state capture by the role of the Gupta family, its associates and Zuma’s son Duduzane, particularly in state-owned entities (SOEs).

“Our call for Zuma to step down is based on the many problems of corruption, governance decay and state capture under his watch. In addition, the removal of Dr Nzimande from the Cabinet is part of Zuma’s manoeuvres to secure successful election of his ordained successor at the forthcoming ANC December national conference,” the SACP said.

Nzimande has been replaced with Hlengiwe Mkhize as Higher Education Minister, while Ayanda Dlodlo takes over Home Affairs leaving her previous portfolio, communications, to Mmamoloko Kubayi. There was no reason for any of these shifts – the much-speculated inclusion of Nkosazana Dlamini Zuma to strengthen the former African Union Commission chairperson’s hand in the ANC presidency contest did not happen – with only the Deputy Higher Education Minister’s job vacant. Buti Manamela now holds that portfolio, moving from the Presidency, to take the job vacated when Mduduzi Manana resigned in the wake of admitting beating women in August.

Controversially David Mahlobo moves from state security, a role that brought him increasingly close to Zuma, to energy. Kubayi has failed to make the necessary public noises regarding the nuclear build programme, and has been caught up in Eskom’s reluctance to sign the next swathe of independent power producers’ agreements.

The new State Security Minister Bongani Bongo, an ANC MP on the justice committee and closely associated with the Zuma grouping, got the news of his new deployment as he was looking to see a doctor. He left the justice committee meeting, on route to a doctor’s appointment on Tuesday afternoon. “When we are deployed, we accept to serve in any capacity… The invitation by the President is an honour,” Bongo told Daily Maverick.

And so EFF leader Julius Malema questioned the reshuffle on Tuesday during a media briefing called before Zuma’s announcement. “Since when is reshuffling around energy such a big deal? It never has been…” Malema said in a live broadcast of the briefing on SABC, adding this was different because of “the elephant in the room – nuclear”.

DA leader Mmusi Maimane described the Cabinet reshuffle as “the latest move in Zuma’s war against anyone who opposes his project of state capture”, and those who refuse to toe the president’s line.

“(Nzimande’s) axing has also provided the pretext for yet another reshuffling of Zuma sycophants, none more pliant than new Minister of Energy, David Mahlobo. This smacks of an attempt to reignite the ANC’s efforts to chain our country to a multi-billion rand nuclear deal with the Russians,” Maimane said in a statement. “This reshuffle has nothing to do with effecting good governance, and ensuring the best people serve our country. On the contrary, Jacob Zuma appears to be firing his critics, and offering promotions in exchange for support ahead of the ANC’s elective conference in December this year.”

The ANC is on public record, saying it was “disappointed”, although its top six officials had been informed on Monday.

Zuma had acted unilaterally, again, and workers were left on their own. And the sooner the ANC alliance partners realised this, the better. “The alliance has been buried,” Vavi said.

Zuma played it straight up and down, given that reshuffles are part of  his constitutional prerogative.  “After careful consideration, I have decided to make the following changes to the National Executive,” said a statement from the Presidency. “I thank the former members of the National Executive for good service in their previous portfolios. I wish the members who are assuming new portfolios all the best in their new responsibilities.”

However, given the political blow-back, and not only from the opposition, in these times of state capture, it may just result in machinations even an experienced and shrewd chess master like Zuma would battle to control. DM