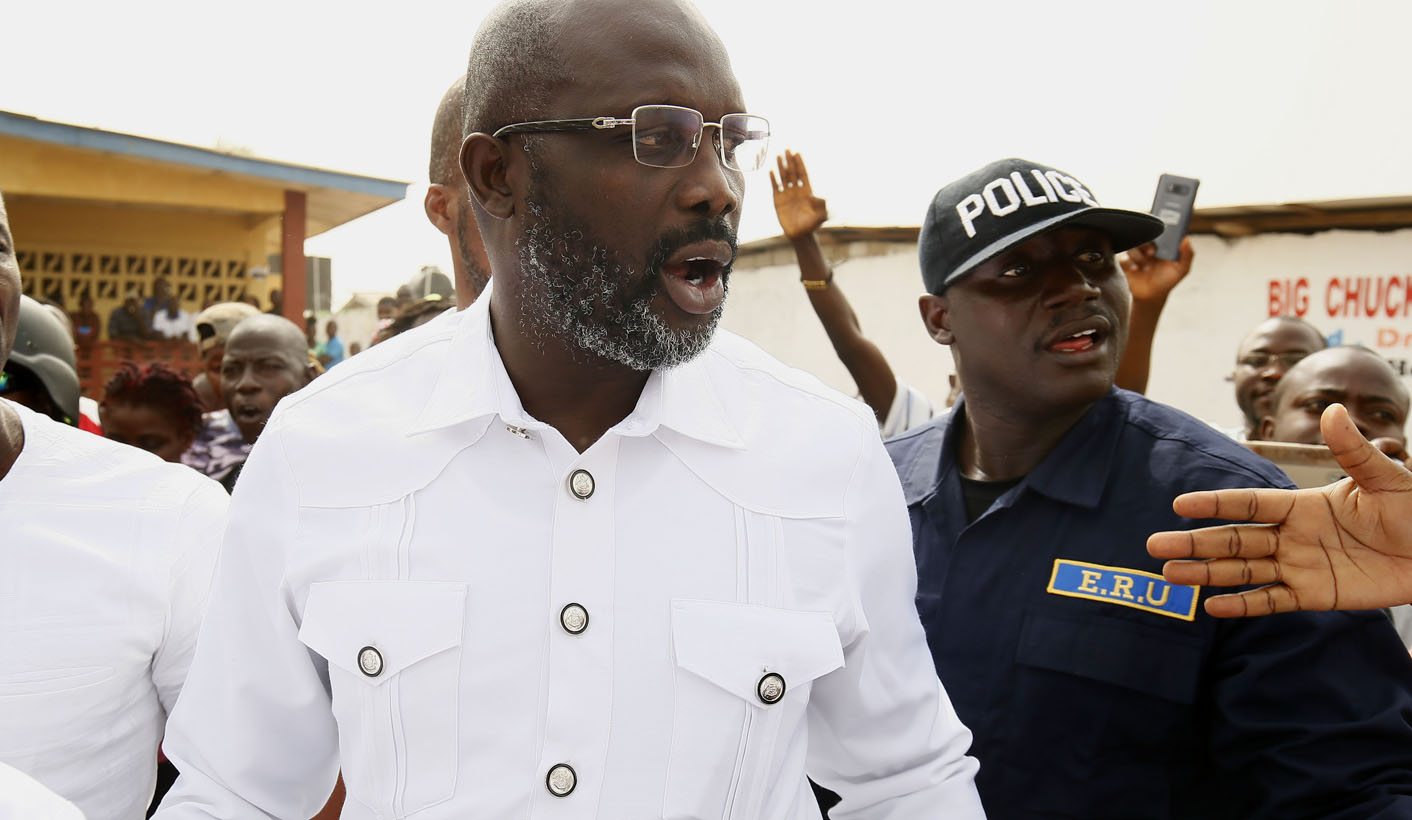 Liberians go to the polls in October. Politicians are campaigning via two different messages on the political posters and banners that decorate Monrovia – one which calls for continuity, the other for change. By GREG MILLS.

Continuity in Liberia has, on the face of it, much to offer. During the 12 years of President Ellen Johnson Sirleaf’s two-term government, the economy has averaged more than 7% annual growth. Per capita income has risen from a low point of just $80 at the end of the second civil war in 2003 to $700, even though the population has increased by nearly 50% to just under five million. Life expectancy is up from 53 to 61 years. What once was defined as a “failed state” is now capable of taking over essential tasks. The UN mission has consequently shrunk from 16,000 at its peak to just 1,200 today. Where there were once long lines of white UN helicopters at Robertsfield Airport, I could spot just one.

Liberia is a better, safer place.

President Ellen Johnson Sirleaf, 78, has a reputation as a tough-minded taskmaster. The whiteboard to the side of her desk identifies clear priorities, time lines and goals for government. She has focused scant resources on the things that matter. She operates out of the same, humble facility in the Ministry of Foreign Affairs as she did when I first visited her in 2006.

And her toughness refreshingly extends to her scrutiny of her personal record.

In response to the question as to how Liberia had managed the twin challenge of economic recovery and transition to a democratic government, “Let me start”, she says, “by taking us back 12 years, to explaining what the agenda items were back then.

“The first priority was to keep the peace. This was critical after two decades of war. Anything else had to be secondary, given that the record showed that there was a very high chance of post-conflict countries reverting to conflict.

“The second priority was to restore basic services to make people think once again that they were human beings, recognising that the challenges were being dealt with.

“And third,” notes the president, “we had to restore the nation’s reputation and creditworthiness. Liberia was a poster child of blood, death and destruction on every television around the world.

“To get things moving again, and get income coming in, we had to quickly reinstate mining and the rubber plantations, and to sort out the debt situation.”

Photo: President of Liberia Ellen Johnson-Sirleaf at the end of a memorial ceremony in the Hall of Remembrances at the Yad Vashem Holocaust memorial museum in Jerusalem, Israel, 06 June 2016, where she attended the ceremony honoring the six-million Jews who perished at the hands of the Nazis during the Holocaust of World War II. EPA/ABIR SULTAN

Liberia’s bilateral and multilateral debt, which was $4.9-billion in 2006, was essentially written off by 2010 following a series of deals, including the commitment of the Liberian government to restrict future borrowing to 3% of GDP and to limit the use of these funds to infrastructure projects.

Looking back, she acknowledges there are things she might now approach differently.

“The first of these concerns capacity. We had a civil service that comprised the various warring factions, placed there for reasons of patronage. While some of them meant well, many had no qualifications. But it was difficult to get rid of them since this was their sole means of income and support for the families, with no private sector and very few NGOs. Even today,” she muses, “60% of the national budget is spent on salaries.”

“Integrity” was the next challenge, she says. “I made bold statements about corruption – including in my inaugural address – without realising how deep-rooted it was, and the extent to which it had become part of the culture. Even though we took some actions, it was so ingrained as a means of survival or for whatever reason that the institutions we tried to build became a microcosm of the problem. This was worsened by the nature and the familiarity of our society, where people would expect certain things from family members.

“Perhaps we needed sociologists or others who could help us understand the roots of the problem. Regardless, we focused on building institutions, laws and policies and improving compensation for workers and systems for remuneration, to help to remove discretion and change the incentives for corruption. Still, this aspect remains a challenge today, whatever the progress we have made.”

She says the issue of integrity goes hand in hand with the country’s next, ongoing challenge – “dependency”.

“When we took over many people had spent a lot of time in refugee camps.”

“The manner in which they were provided with shelter and food disempowered them,” says the president. “They got to a place where they felt entitled. But this dependency was not just concentrated at the lower end of the ladder. It quickly has become a way of life,” she says, “more than the social sharing that is part of any African society.

“This has led to unacceptably high salaries at some levels, in part because of the demands on people to respond to the needs of others. If we did it again,” she advises, “I would caution people to ‘to do the hurt early’.”

Foreign diplomats are quick, in this regard, to point out that the salaries of Liberian lawmakers are today more than their US counterparts.

“These main challenges – of capacity, integrity and dependency – were reflected in just about everything that we did,” says President Johnson Sirleaf, “whether this was promoting the private sector, dealing with communities, and in finding capable ways of applying rules and procedures.”

Doing this in a democratic environment made this “more difficult”. But any attempt to do anything in a less convoluted “autocratic” way could have been a trigger for conflict. “We could not suppress freedom in getting things done. But there is a need for people to understand the responsibilities that go with democratic rights. This probably has to begin,” she reflects, “at a very early age, in the curricula of schools.

“From our side, probably there was not enough consultation with the people, and too much focus on getting things done. We needed from time to time to take a step back, to attend town hall meetings, to talk about how we got into conflict and explain how we are going to get out of it.”

Part of this assessment would include the role of external actors.

“We have spent too much time building a wide range of institutions that we cannot afford and not enough on infrastructure and job creation.” This is linked to the challenge of dependency. “We need to empower people to become self-reliant. In Liberia we spend too much time viewing ourselves as America’s stepchild, with the US as a place of refuge. While maintaining this partnership is important, we must break the feeling that our long-term security and survival lies with the United States or in emulating costly US institutions, systems and practices.”

The donors agree wholeheartedly that there has been too much focus on Monrovia and too little on rural development, especially on building roads. The tendency of the UN and others by their own admission “to do too much” has compounded a failure to improve the conditions for doing business, where the costs for the private sector, they say, from tax to land and including corruption, “remains simply too high”.

The president agrees that for all of the slogans about “change” versus “continuity”, the upcoming election is “down to personalities”. And in this regard, in a country founded 170 years ago as a place of return for freed slaves, playing the ethnic card – essentially between Americo-Liberians (also known as “Congoes”, around 2.5% of the population of 4.5-million) and Natives Liberians (or “country people”) – is all too tempting given the former’s historical role. This includes denying citizenship and voting rights to indigenous Liberians until the 20th century, one-party oligarchic rule for 133 years, a lack of property rights, and forced labour practices.

Despite increasing integration within Liberian society, hastened by democracy, technology and the spread of prosperity, Johnson Sirleaf fears that this schism might again rear its head in the election.

Photo: The election is seen as a two horse race between the former footballer Weah and the current VP Boakai. (Greg Mills)

Ironically, the race card is unlikely to be played by one leading candidate, George Weah, a native Liberian, the footballer who excelled for clubs that included Chelsea, Monaco, AC Milan, Manchester City, and Paris St Germain.

At Stamford Bridge the fans would chant the song: “He’s big, he’s black, he leads the Chelsea attack, Georgie Weah… Georgie Weah…!” Today, campaigning under the banner of “Change and Hope”, he is more interested in talking about his role as a unifier in society, improving regional trade as a means of bringing down prices, dealing with education and healthcare systems, and focusing on infrastructure and agriculture as engines of growth, than he is in race. Living up to his mantra that “without education we cannot be successful”, after his footballing career Weah took himself off to the United States to earn a college degree.

Photo: George Weah, president-elect of Liberia, with Greg Mills in Monrovia earlier in 2017.

He laughs about the Chelsea fans’ refrain. “Football taught me that, black and white, you are teammates on the same bench, in the same team. It also instilled me with a discipline. Look at yourself,” he shoots back. “You wrote a book with President Obasanjo. If we divided between the races we would not be able to benefit from the practical output of that collaboration.”

For all of the challenges of corruption and dependency, it’s too easy to forget the long road Liberia has travelled this century. In the 1997 election, Charles Taylor campaigned on the slogan, “He killed my ma, he killed my pa, but I will vote for him”, his landslide victory explained by the fear that he would otherwise restart the civil war. While identity remains a political force, and potential fissure, it is a measure of Johnson Sirleaf’s tenure that Liberia is now placed to deal with issues of development and dependency rather than simply survival. DM

Main photo: Liberian presidential candidate for the Coalition for Democratic Change (CDC), George Weah (C) leaves a polling station after casting his ballot in presidential elections run-off in Monrovia, Liberia, 26 December 2017. Some 2.1 million registered Liberian voters are eligible to vote in the presidential run-off between George Weah, of the Coalition for Democratic Change (CDC), and Joseph Nyuma Boakai of the governing Unity Party (UP). EPA-EFE/AHMED JALLANZO