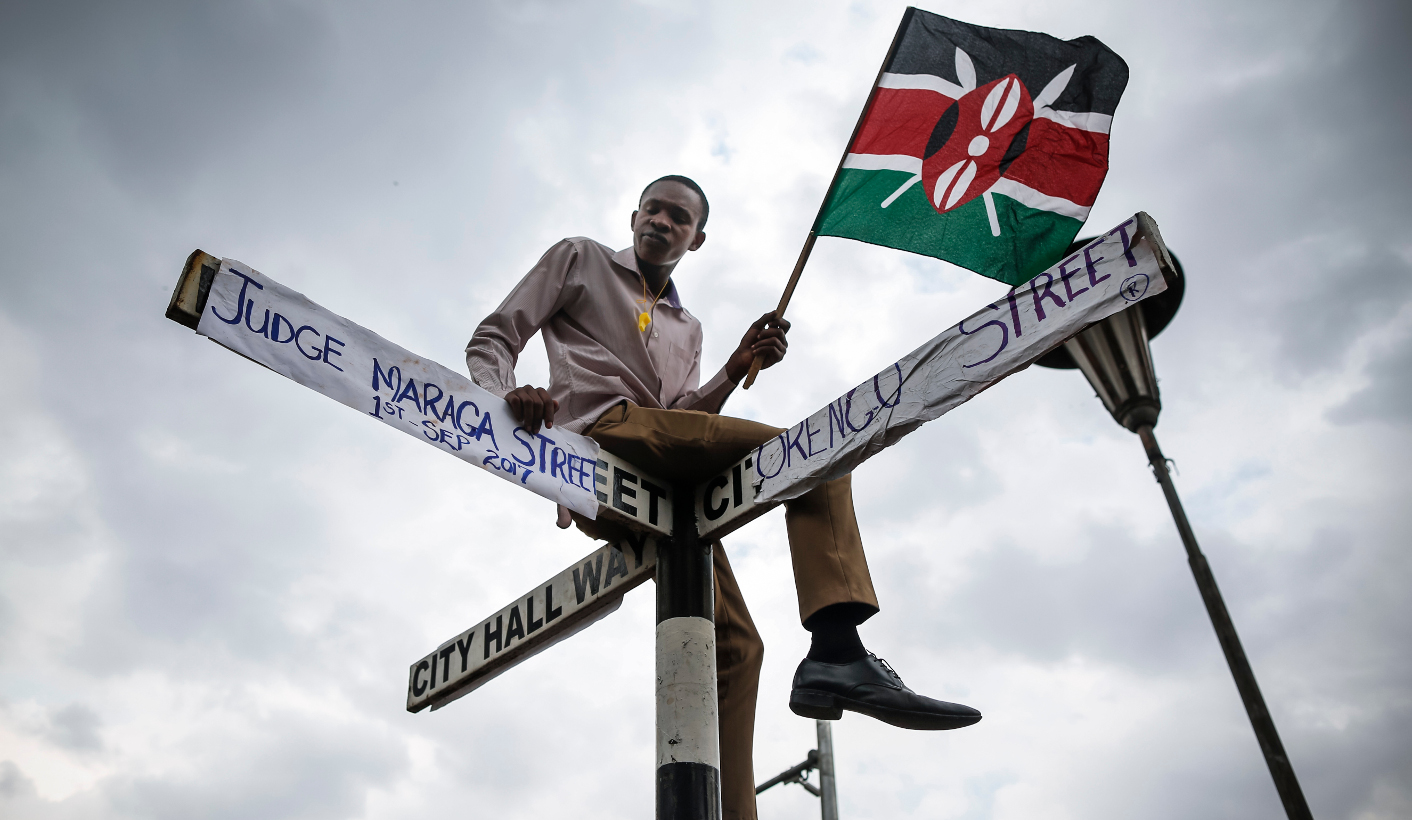 Kenya’s Supreme Court of Friday stunned the country – and the continent – by overturning incumbent President Uhuru Kenyatta’s victory in last month’s elections. But can the IEBC organise new credible elections in the time frame stipulated. By PETER FABRICIUS.

The court, in a 4-2 majority decision, announced in Nairobi that the Independent Electoral and Boundaries Commission (IEBC), had conducted the August 9 presidential elections inconsistently with the Constitution and the Elections Act.

Maraga added that “the court has however found no evidence of misconduct” by Kenyatta.

But on Friday the court, after declaring the August 8 presidential election, “invalid, null and void,” ordered fresh elections within 60 days.

Odinga enthusiastically welcomed the decision which he said proved that “no-one is above the law in Kenya. A new Kenya has been born today” he said, ending the impunity of the past.

Kenyatta went on national television to publicly accept the court’s verdict, saying the country would go back to the polls and called on his supporters to accept the result peacefully.

“I personally disagree with the ruling that’s been made today but I respect it,” Kenyatta said.

However in a latter, more ominous message delivered in Swahili to his supporters at the capital’s Burma market, and widely transmitted on You Tube, Kenyatta said: “This story of theirs is being paid for by white and other useless people.” He also seemed to threaten the four judges who had issued the majority decision – and whom he had earlier accused of subverting the will of 16 million Kenyans.

In his remarks in Swahili at the market he said the judges “will know we are men” and “let them wait for us after the election”.

Some doubts have arisen about whether Kenya can hold elections again, in just 60 days, especially because the legitimacy of the IEBC has now been questioned. Odinga told a press conference that the commissioners should be indicted and that it was impossible for them to conduct the new elections.

The court’s bold decision astonished many observers, both inside and outside of Kenya.

Peter Aling’o, Nairobi-based senior research consultant to the Institute for Security Studies said no African court has ever annulled a presidential election result before and that Kenya had taught a lesson to the continent that “the greatness of any nation state that is founded on constitutionalism is the respect and adherence to the Constitution and the rule of law.”

He said he did not expect any instability to arise from the ruling as Kenyatta had accepted the decision and repeatedly asked Kenyans to remain calm and peaceful.

But he did express concern about the logistics of holding the next election so soon, because of Odinga and NASA’s insistence that the present IEBC could not preside over it.

The IEBC said in a statement that the court’s ruling had applied only to the transmission of results.  “This therefore means that there were no aspersions cast on the voting and counting of votes and that the sovereign will of the Kenyan people was fully respected, in this respect.”

Aling’o foresaw problems in that the IEBC had also indicated that it would be rolling out a plan for the fresh election in the next couple of days, “implying that the IEBC will remain intact” – apart from some internal changes.

“This is very brave,” said Greg Mills, director of the Brenthurst Foundation, about the court’s decision. “It shows the independence of the courts. I think it’s unprecedented. I can’t think of another court decision on the continent overturning an election result.”

Nic Cheeseman, Professor of Democracy and International Development at the University of Birmingham agreed it was a brave and important decision.

“This is stunning news,” said Michela Wrong, author of a landmark analysis of Kenya’s politics: It’s Our Turn to Eat; The story of a Kenyan Whistleblower.

“The jaws of a thousand political analysts are hanging open.

No one expected this verdict, not even the NASA opposition coalition which challenged the election result – it had repeatedly said it viewed the Supreme Court as fatally biased in Jubilee’s favour.

“This marks a historic triumph for Kenya’s judicial system. The court has proved its political independence beyond doubt. But it does also raise a host of troublesome questions.

“How can a discredited IEBC run a credible new election in 60 days time? And who will accept the outcome of THAT poll, given the huge distrust that exists between the NASA and Jubilee camps?”

Although the court has not yet released its full judgement, Mills said it appeared that it had overturned the results in part because of incorrect procedures followed by the IEBC but also because it believed there was some truth in Odinga’s claims that the tallying of votes had been tampered with.

The court’s registrar had earlier reported that some completed tallying forms were uploaded onto the IEBC’s website even before the poll, that many were signed by the same person – instead of by representatives of different parties – and others lacked the IEBC’s official watermark.

Odinga condemned the election observers for “sanitising fraud” by approving the election in their interim reports issued days after the polling.

Mills agreed that many commentators and election observers had been too quick to condemn Odinga for contesting the results, calling him a bad loser.

“He was a bad loser with good reason, it now turns out” Mills said. “This really shows that the problem with elections is not the polling on election day but in the tallying of results.”

He sharply criticised election observers who “wandered around polling stations on election day and pronounced their approval before the counting had been done”.

Mills said these observers did more harm than good. “All the election observers should be taking a long, hard look at themselves now, as should Kenya’s own election commission. The problems with elections are not easily visible. They are digital and technical.”

The August 8 elections were monitored by a large number of observers, either from Kenya or abroad. Among the most prominent were those from the African Union (AU) headed by former SA President Thabo Mbeki, the European Union (EU) mission headed by Marietje Schaake, a member of the European Parliament and the Carter Center observer mission, headed by former US Secretary of State John Kerry.

In their interim reports, issued a few days after the voting, all of the election observer missions pronounced themselves largely satisfied with what they had seen. They did, however, quality their reports by saying they were provisional, pending the final outcome of the vote counting and the official announcement of results by the IEBC.

But some observers were more bullish than others even then. On August 10 Mbeki declared that the elections offered an example to the rest of Africa in the way they had been conducted.

Kerry noted on the same day that there had been “minor variations” in proper processes but added, that “the bottom line is that we believe the IEBC put in place a detailed, transparent process of voting, counting, reporting and securing the vote, all of which lends significant accountability and therefore confidence in the results.” DM

Photo: A supporter of The National Super Alliance (NASA) opposition coalition and its presidential candidate Raila Odinga sits on top of a street sign post that has been relabeled ‘Judge Maraga Street’, referring to Chief Justice David Maraga, and ‘Orengo Street’, referring to NASA’s lawyer James Orengo, in front of the Supreme Court in central Nairobi, Kenya, 01 September 2017. Kenya’s Supreme Court on 01 September overturned the re-election of President Uhuru Kenyatta and ordered a re-run of the election within 60 days, citing irregularities. Ecstatic opposition supporters marched through the city to celebrate ‘historic’ court decision. EPA-EFE/DAI KUROKAWA