Corruption in the modern world: Insights from an ancient science 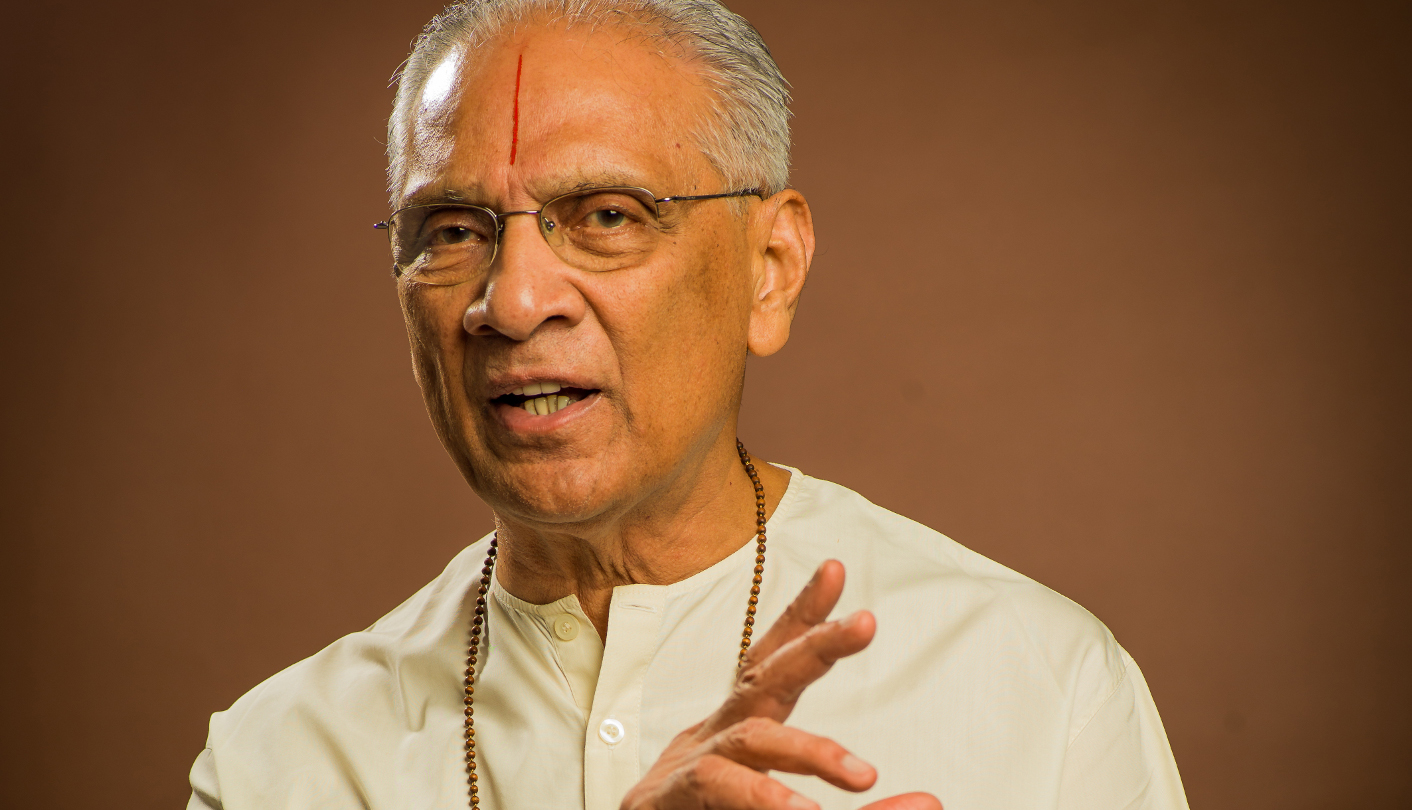 At 90, Swami Parthasarathy is internationally recognised as the greatest living exponent of Vedanta. An art, philosophy and science of living that is almost 4,000 years old, what does it have to teach us about the modern malaise of corruption? KEVIN BLOOM asks Sunandaji, the swami’s daughter and foremost disciple, who has come to South Africa with her father to spread the word.

‘Reforming the world is like straightening a dog’s tail.’

Daily Maverick could not have asked for a more unequivocal answer. The words came like a thunderclap out of the mouth of Sunandaji, the daughter and foremost disciple of Swami Parthasarathy, whom the Dalai Lama himself had recently endorsed as one of humanity’s greatest living gurus. The copyright on the statement did not belong to Sunandaji, however, and nor did it belong to her father – the words, as Sunandaji made clear, were originally spoken by Swami Rama Tirtha (1873 to 1906), who had played a pivotal role at the turn of the last century in bringing the philosophy of Vedanta to the West.

So yes, in only two short paragraphs, we have been graced by the presence of one reincarnation of the Buddha, a pair of epoch-defining swamis, and a woman whose presentation of ancient wisdom in contemporary thought has been applauded by Harvard Business School, Oxford University, and the Young Presidents’ Organisation. Suggesting that we should now take a breath and step back.

Our question to Sunandaji – full name Sunanda Leelaram – was (somewhat guilelessly) this: “Is it possible to remove corruption from society? If not, how do we deal with it?”

Initially, we had wanted to be more specific. We had wanted to ask how the principles of Vedanta applied to a country whose resources had been stolen, packaged and flogged by its own elected leader. We had also wanted to mention that elected leader by name. But the response from the Vedanta Institute, the international organisation founded by Swami Parthasarathy to spread the teaching, was that Sunandaji preferred not to comment on particular people or events. Which, from the viewpoint of 3,700 years of human history, beginning when the first of Vedanta’s foundational texts were authored, seemed fair enough – if the philosophy could encompass the motivations of one prototypical tyrant, we reckoned, it could encompass them all.

“Vedanta is a science of life and living,” Sunandaji had explained, by way of a cursory introduction, at the start of our interview. “It is Indian philosophy, not necessarily Hindu philosophy. And although this philosophy came from India, it is meant for the world. It unearths those facts and laws of life that can be scientifically tested. In a similar manner, the ancient masters treated Vedanta as a science. They went about it in an intelligent way until they had established the laws.”

On the opening page of Vedanta Treatise, Swami Parthasarathy’s opus (he has published 11 books, three of them international bestsellers), we learn that Vedanta means “culmination of knowledge” – in Sanskrit, veda is “knowledge” and anta is “end”. This knowledge, Parthasarathy writes, is of the “real Self”, which is presently obscured by body, mind and intellect. Humanity is universally governed by two motivations, we are informed, which is to acquire wealth and enjoy what is acquired. But “few realise that there can be no satiation or fulfilment through acquisition or enjoyment”, we read at the bottom of the page. “Through external pursuits.”

It is these last three words that prepare the reader for the 370 pages that follow – Vedanta is not about the world out there. It is about “subjective development” which “prepares the individual to meet the challenges of the objective world”. And while we are promised that Vedanta will equip us with the knowledge to apply the correct “choice of action” and “technique of action” in society, the office, and the home, we are instructed to take nothing on faith. Vedanta has no messiahs or masters; its authority is presented to the reader as its own lived truth. “Whatever is forced is never forceful,” quips Parthasarathy.

Needless to say, he doesn’t want us to take just his word for it: so he quotes endorsements from the Orientalist Max Müller, the Indologist Paul Deussen, the sage Swami Vivekananda, and the abovementioned Rama Tirtha. Parthasarathy’s biggest catch, however, is the philosopher Arthur Schopenhauer, who was famous for “hurling abuse” on every philosophy save his own.

Said Schopenhauer: “In the whole world there is no study so beneficial and so elevating as that of the Upanishads (Vedanta). It has been the solace of my life, it will be the solace of my death.”

On Sunday 13 August, at the Linder Auditorium in Johannesburg, the 90-year-old Swami Parthasarathy will be giving a free hour-long lecture on the subject of karma. Together with Sunandaji he has been touring the country since the beginning of the month, and the lecture will represent the tour’s high point. So what does Vedanta have to say about karma? Is this where things get irredeemably esoteric?

“With the knowledge of the law of karma you begin to realise that your shortcomings and difficulties are the creation of your past unintelligent activities,” we read in Vedanta Treatise. “And that you have now the opportunity to create a better future for yourself. That you are the master of your destiny.”

Which, in its entirely reasonable (i.e., non-esoteric) presentation of the facts, is where we can begin circling back to the subject of corruption.

In the conception of karma cited above, a key phrase is “unintelligent”. Parthasarathy does not mean this in the sense of a genetic stupidity that cannot be overcome, but in the sense that “reason is the sap of Vedanta”. Thinking in his cosmology is skilled work; it needs to be learnt and practised. “People are possessed with groundless beliefs,” he writes of the modern world – and these beliefs rest either upon superstition or upon someone else’s assertions.

In other words, as Parthasarathy puts it, where the passively bad lead a “wrongful, immoral life without really intending to do so”, the passively good do not plan their actions either, and are only driven by “good impulses”. The aggressively bad, therefore, are the people at the heart of our original question.

“An aggressively bad person viciously plans and schemes,” explains Parthasarathy, “manipulates and manoeuvres immoral, corrupt ways of life for pursuing his own selfish motives. He observes no scruples. Breaks custom and tradition, rule and regulation all for his self-centred, personal aggrandisement. The aggressive constantly employ their intellect in programming their life. Whereas the passive never do so. Consequently, the aggressive are more powerful. The aggressive bad dominate over the passive good and bad. And freely exploit them to serve their personal interests.”

Again, out of respect for the wishes of the Vedanta Institute, we won’t mention our own elected leader by name. Do we even need to? But what we should probably point out is that he’s nobody’s fool – if there are still people out there who believe that our state president is intellectually challenged, the above stands as a corrective.

What about the aggressively good, then? Are these our agents of redemption? Can corruption ever be expunged?

“Swamiji is not interested in correcting the world,” Sunandaji said of her father. “But he has been tirelessly propagating the philosophy, one person at a time. It’s like sowing seeds; one day they will bear fruit. Even if we don’t see those fruits in our lifetimes.”

She returns to Swami Rama Tirtha and the metaphor of the dog’s tail. “That is why in history you will find great masters straightening the tail, and then it goes back. The whole exercise therefore starts with the Self. Are you perfect? Are you free of corruption?”

Since it stands to reason, to paraphrase Parthasarathy, that the aggressive are always and everywhere outnumbered by the passive – who, after all, is genuinely free of the whoop and wharf of thoughts and emotions, likes and dislikes? – we could do worse than to end off with the insights of Swamiji on the highest type.

“The fourth cadre is the aggressively good person. Rare indeed is one in this category. The aggressive good is inherently virtuous, divine. He uses his intellect to plan and programme his course of life for the benefit of one and all. Never functions impulsively. His reason and judgement steers every activity. Directed to the well-being of the community. He studies facts, foresees consequences and works towards the best interest of the people. A single aggressively good person can bring about peace and harmony in the community.”

The mechanics of science and intellect, apparently – zero evidence of faith or belief. DM

To book for Swami Parthasarathy’s free lecture in Johannesburg on 13 August, go here