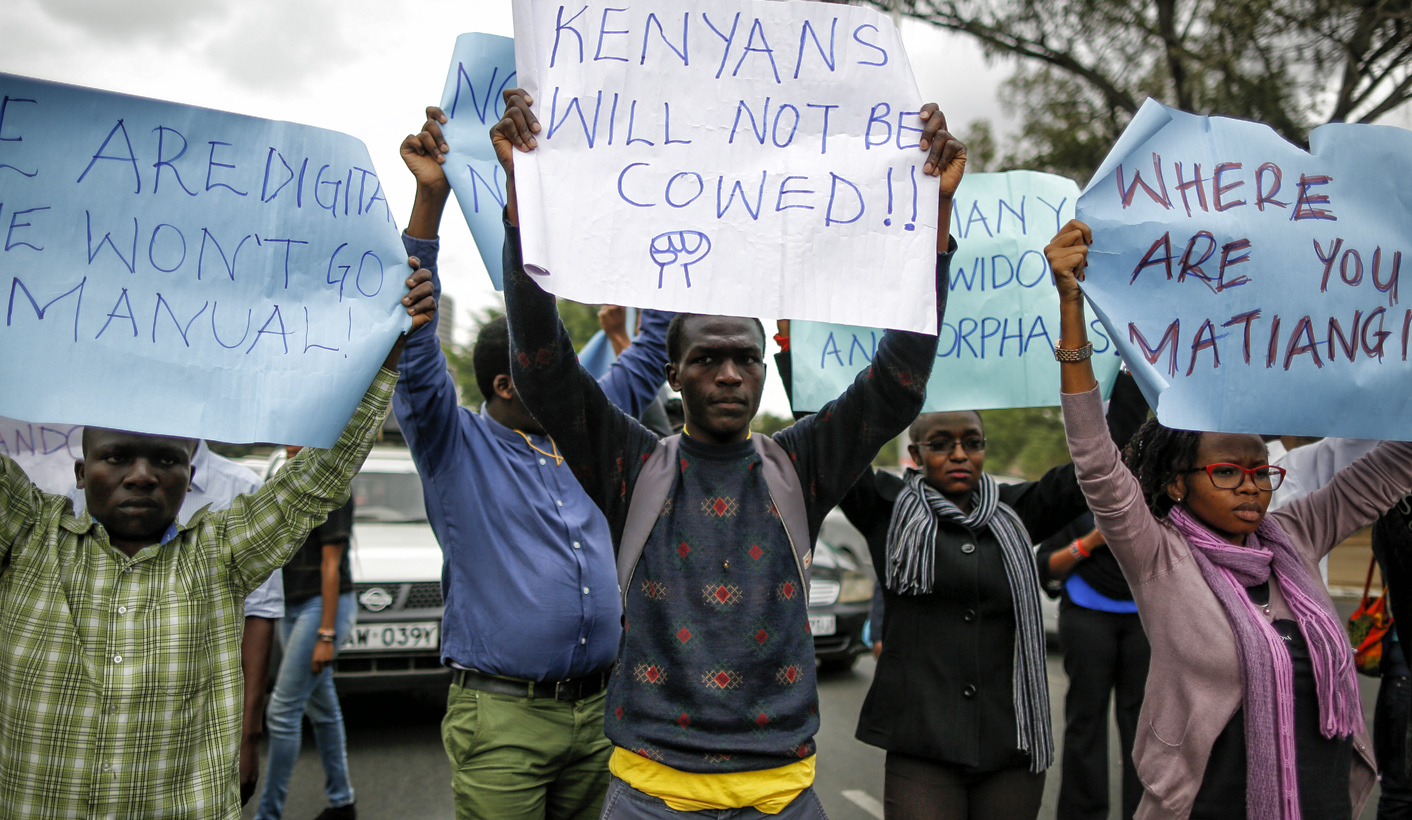 Kenya was already on edge about its upcoming elections when news broke over the weekend that a high-ranking official from the country’s elections body, Chris Msando, had been murdered. Amid worries among Kenyans that there could be attempts to rig the polls, as has happened in the past, the death of an official intimately involved in ensuring the elections process caused big ripples just days ahead of the 8 August election. By CARIEN DU PLESSIS.

On the surface Kenya’s is an ordinary democracy, if a little noisy. Election posters of a number of different parties litter walls, street poles and palm trees. Politicians are going on walkabouts and holding rallies, where they’re kissing babies or evoking religious metaphors in a different town every day. There’s even been an American-style televised presidential debate, except last week the incumbent snubbed it and fourth-time presidential hopeful Raila Odinga debated himself in what was considered by many to be a small PR coup.

But beneath these machinations of a healthy democracy, there is a more sinister undercurrent. It surfaced over the weekend when ICT manager for the Independent Electoral and Boundaries Commission, Chris Msando, was found dead in Muguga Forest, just outside Nairobi. A 21-year-old student, Maryanne Wairimu Ngumbu, was also murdered, apparently because she was out for a drink with him on the Friday night Msando disappeared.

It wasn’t an ordinary death. Evidence suggests a kidnapping of sorts, and head, neck and back injuries tell a tale of possible torture.

It was a warning, and it was calculated to stoke fears in the run-up to the elections where uncertainty is as much part of the campaign staple as propaganda.

Many still remember how, a decade ago, the elections went horribly wrong and Kenya came close to civil war after 1,400 people died violently and 600,000 were displaced in just 59 days.

Fearing a repeat, those who can have taken to working from home for the next few days, or even leaving the country.

At issue was mistrust from both sides around the elections result, which officially saw Mwai Kibaki score a narrow victory over Raila Odinga. The violence, however, took on an ethnic dimension and current president Uhuru Kenyatta and deputy William Ruto were charged by the International Criminal Court with crimes against humanity.

The charges have since been dropped because of a lack of evidence.

Yesterday even the African Union – which only comments when the going gets rough – issued a statement saying it was shocked about Msando’s killing.

AU Commission chair Moussa Faki Mahamat condemned the act and called on Kenyan authorities to “conduct a full investigation into the murder and bring those responsible to justice”.

He also urged that the government provide those involved in organising the elections with adequate security “to guarantee the security and integrity of the electoral process”. He called for free, fair and credible elections.

He also called on the authorities and the electoral body to ensure that Msando’s death does not negatively impact on the elections.

Up to this point it’s not been such a smooth ride for the IEBC.

Recently the National Super Alliance of opposition parties was up in arms about the IEBC’s printing of 1.2-million extra ballot papers, fearing rigging, but the body said it was to provide for spoilt ballots.

There have also been questions about the integrity of its officials, a bribery scandal, and the body’s general technical ability to run sound elections.

Political analyst and elections watcher Nanjala Nyabola said, “There are a lot more question marks than I would like.”

These relate to how security, access to the polls and disputes would be handled by the IEBC. “So far we have had one or two really big disputes and a number of smaller ones. I see a lot of question marks around the ability of the commission to arbitrate the disputes,” she said.

She added that the courts were the last resort and there were even question marks around whether they could handle disputes effectively.

As for the IEBC, accused by the opposition of bowing to the governing Jubilee Party, Nyabula said it was “interpreting the law in a conservative manner” while the opposition wanted to see “a more radical interpretation of the law”.

She said this was true for a lot of institutions tasked with ensuring credible elections, such as the judiciary, parliament, and the police. “The way they are interpreting their mandate and function leans towards preserving the status quo,” she said.

One example was the IEBC’s failure to act against the placement of advertisements about government achievements in the six weeks before the election. There are clear-cut rules about this, but the body’s failure to do these small things could in the end be significant when it came to bigger things, she said.

“The election is determined by the institution that counts the votes. If it’s not strong, then the election becomes a big giant question mark.”

In Nairobi on Tuesday some civil society supporters gathered in Uhuru Park – where only on Sunday Kenyatta presided over a peace prayer rally for the elections.

They asked for speedy investigations into Msando’s murder, and justice. They also want a vote with integrity. Kenyan authorities have five more days to ensure this is possible. DM

Photo: Members of the civil society stand with placards to protest against the killing of Chris Msando, the ICT manager at the Kenya’s Independent Electoral and Boundaries Commission (IEBC), in Nairobi, Kenya, 01 August 2017. Chebukati urged public not to speculate on Msando’s death. Msando, who was in charge of the electronic voting system, went missing on 28 July before his body, with alleged signs of torture, was found on the outskirts of Nairobi on 31 July. Kenya will hold general elections on 08 August. EPA/DAI KUROKAWA