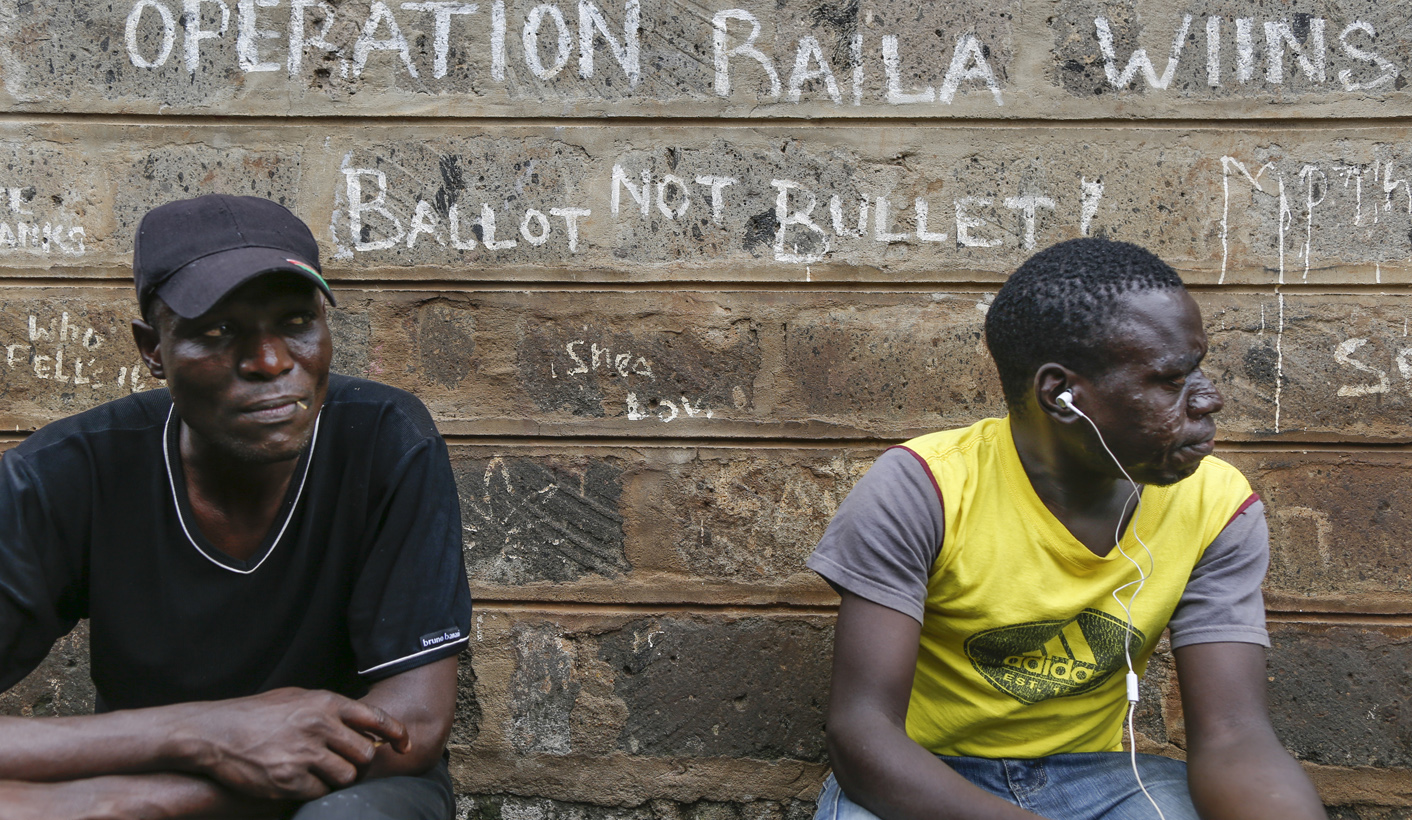 Kenya has been through dark periods before. Uncertainty surrounding polls, amid massive irregularities have degenerated into something other before. It seems to be happening again, and it casts doubts about the country’s readiness to hold polls. By NJERI KIMANI.

Pre or post-election violence is not a complex eventuality. Often the signs of impending chaos are there. In Kenya, the requisite ingredients have all been thrust into the pot and they are cooking. Uncertainty is in the air.

The body mandated to handle the Kenyan elections Independent Election and Boundaries Commission (IEBC) seems ill prepared to ensure the polls are transparent and credible.

With just 26 days left to the polls, the firm is yet to weed out 92,000 dead voters from the official voter register, which opposition leaders claim is a plot to rig the 8 August polls.

Audit firm KMPG claimed that there was an estimated additional 1,037,260 dead voters on the roll, calling for their immediate removal.

In the survey carried out in May, the firm established that more than 17,523 passports used to register were inactive.

Gerald Kasimu, head of Information Technology Advisory Services, pointed out that they had used data from the Civil Registration Department, The government organ mandated to carry out birth and death registrations.

National Super Alliance (Nasa) Principals expressed concern that the dead voters could be a ploy by the government to rig the elections in their favour. Principal Raila Odinga claimed that two million votes were rigged in favour of the ruling Jubilee Party, citing that the trend could be repeated in this year’s election.

“The register already has massive irregularities, including double registration and names of deceased persons. We have pleaded with IEBC to clean up the register but they have not taken our pleas seriously,” said Odinga.

Co-principal Musalia Mudavadi wants the already disbanded National Assembly recalled for a special sitting to discuss the register. He argued that the only way to ensure the elections were credible was by presenting a list with no anomalies.

IEBC Communications Manager Andrew Limo claims that it is impossible for people to vote twice, saying that the Biometric Voter Registration machines would not capture a voter’s details twice.

IEBC suffered twice when the high court had cancelled tenders issued to Dubai-based Al Ghurair Printing & Publishing for the printing of the 120 million ballot papers which will be used in the polls.

The $24-million tender came under sharp criticism from Kenyans, who claimed that there was no transparency in the way the tendering process was carried out.

Seven presidential candidates demanded that a local company should get the tender, after the nullification was done by the High Court.

Presidential aspirant Ekuru Aukot claimed that there was nothing hard in printing that would warrant it being done outside the country.

“It’s not rocket science. We have confidence in ourselves and have the right technology here. Even our cash is printed in the country and it is our legal tender,” he added.

President Uhuru Kenyatta and his deputy, William Ruto, questioned the judiciary handling of election related cases, pointing out that it favoured the opposition.

The leaders claimed that the courts intended to have the elections pushed forward, saying it was practically impossible that the two insisted that judges were working with the opposition in a scheme to have the polls postponed.

Kenyatta claimed that the opposition was using the judiciary and IEBC to scuttle the electoral process as they had detected loss.

He claimed that they were not “fools “having respected the judiciary a while ago, but they would not accept the courts to be used by people with a selfish interest in frustrating the electoral process.

“We will not allow our competitors to frustrate IEBC, thinking they will win through the back door,” said Kenyatta.

In a press release Chief Justice David Maraga accused political leaders of casting aspersions on the administration of justice based on a misinterpretation of his statements.

“It has the potential to impair public confidence in our courts, and this concerns me a great deal,” said the statement.

With over 40 people killed by al-Shabaab in the past two months, the fear that the elections could become bloody has led to the massive migration of people to their rural villages.

Haunted by the memories of the Kenyan post-election violence that rocked the country in 2007/08, the majority of Kenyans have already started fleeing the towns.

The PEV violence, which costed 1,600 people their lives, and displaced 650,000 remains a scar on the Kenyan polls.

Already, the European Union (EU) has issued an alert over the possibility of war during the elections over the current trends in the campaigns.

The head of the EU Election Observer Mission (EOM), Marietje Schaake called on all players to take safety measures to stop violence.

“War would create a situation where everyone loses and our current task should be ensuring that this is averted,” she added.

Human Rights Watch (HWR) report has already raised concern over the looming war, citing that the government is not keen on averting a possible outbreak of post-election violence.

In a post on their website HRW asked the government to urgently investigate allegations of threats and intimidation.

“Many people in Naivasha town described threats and intimidation between community members, but said police have failed to investigate, prosecute culprits or protect residents,” the organisation said.

“Kenyan authorities should do more to prevent a repeat of the 2007 bloodshed in Naivasha,” said Otsieno Namwaya, Africa researcher at HRW.

Fears of ethnic violence have seen people perceived to be opposition supporters flee the area.

On 10 June, Maurice Muhatia, head of the Nakuru Catholic Diocese, had voiced his concern over the rate at which families were fleeing the county ahead of the August elections.

Muhatia claimed that families were first transporting their children, then wives and finally personal effects to their homes.

“We need peace in Nakuru. We lost so much during the violence and we hope that there won’t be a repeat in this year’s poll. We are calling upon all stakeholders to ensure that every Kenyan feels comfortable wherever he is in spite of his second name,” he added.

Masese Kemuncha, a political analyst, hit out at IEBC for what he termed as “preparing so hard to fail”.

“The election date is cast on stone but with the current mishaps, the credibility of the organisation is already in question. We expect a lot of election-related petitions to rise from the next month’s polls,” he added. DM

Photo: Men sit in front of a wall with messages of peace painted during the 2007-08 general elections that saw post-election violence which killed some 1,300 people, in Kibera slum, one of the opposition leader Raila Odinga’s strongholds in the capital Nairobi, Kenya, 03 July 2017. EPA/DAI KUROKAWA