Op-Ed: Is it really possible to reform the Vatican? 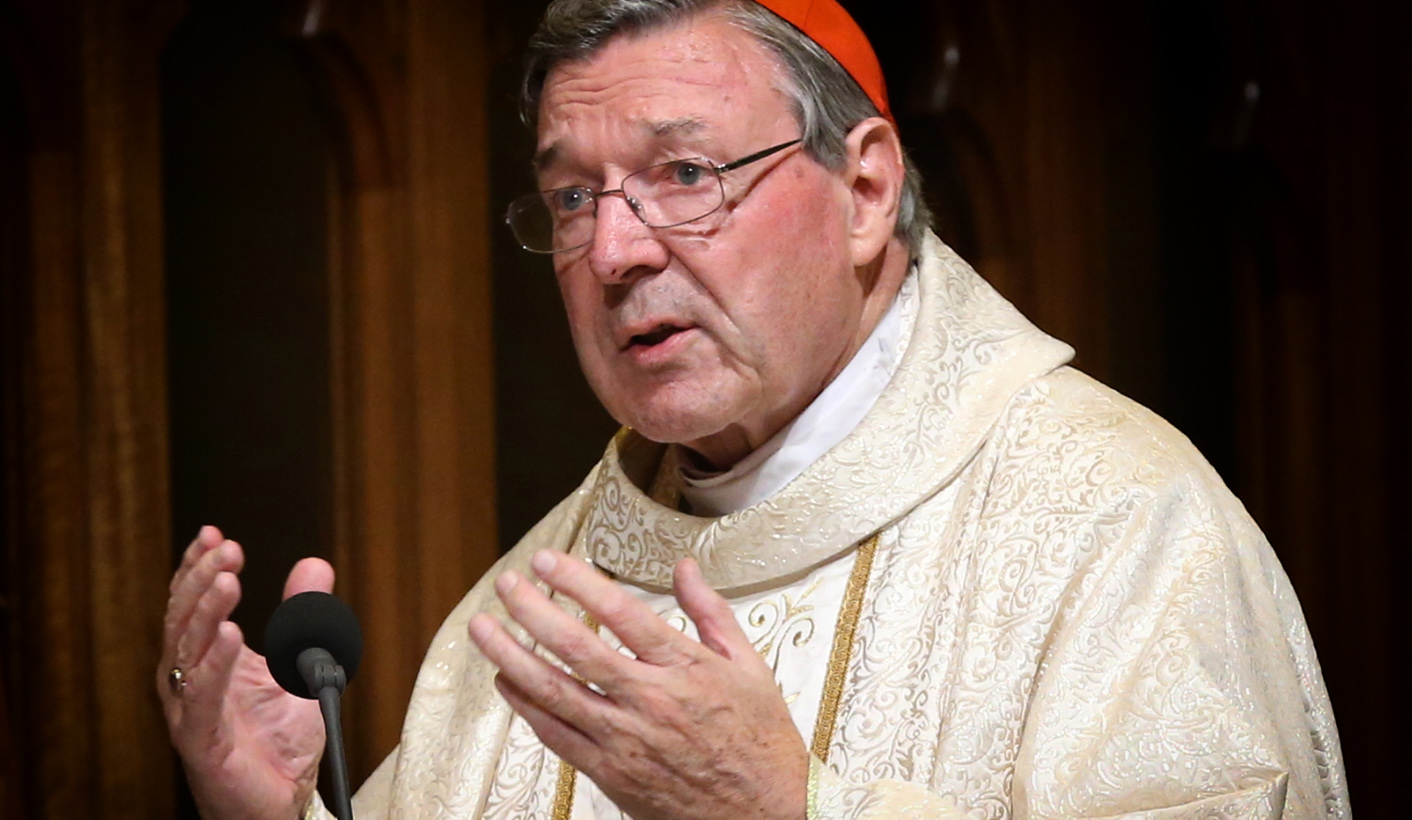 Things got tough in Rome last week. First, on Thursday, Australian police in the state of Victoria announced that they have filed sex abuse charges against Cardinal George Pell. Pell was moved from Sydney to Rome by Pope Francis in 2014 to spearhead his reform of the Vatican’s financial system. Then, on Saturday, to the dismay of many conservative Catholics, Pope Francis decided not to renew the appointment of the church’s chief doctrinal official. German Cardinal, Gerhard Ludwig Müller, was appointed by Pope Benedict XVI to head up that office just before he decided to quit in 2013. Both moves have implications for Pope Francis’ project of reform. BY RUSSELL POLLITT.

George Pell is no stranger to controversy. He is known to be ambitious, bombastic, overbearing and combative. Pell could be accused of many things; being timid is not one of them. When Pell was an auxiliary bishop in Melbourne, he was appointed to be an adviser to the then Cardinal Joseph Ratzinger (later Pope Benedict XVI) who was the Church’s chief doctrinal enforcer. Pell was very much of the mindset of Ratzinger and Pope John Paul II. Theologically conservative and authoritarian, he supported many of the moves by John Paul II to wind back the reforms of the church’s Second Vatican Council in the 1960s.

To his admirers Pell is solid, orthodox (whatever that means in contemporary Catholicism) and courageous. His supporters believe that he is a man who dares to stand on the side of truth in a world of moral relativism. When he was Archbishop of Melbourne, and later Sydney, he provided an energetic and strident voice attempting to restore clerical authority and the orthodox Catholic voice on social issues. Pell was seen, by some, as the one who would “rescue” the church from progressives and restore it to “orthodoxy”.

Pell had a reputation for being a good and exacting administrator. In 2014 Pope Francis, curiously, called him to Rome to take on the massive task of reforming the Vatican’s tainted financial system. Curiously because Pell is certainly not of the same mind as Francis. This was manifestly obvious in the two meetings of the Synod of Bishops on the Family in 2014 and 2015. Several times Pell interjected and made it quite clear that he was not in Francis’ camp. He signed a letter – along with other Cardinals – questioning the fairness of the process that Francis had decided on at the Synod.

Curiously too because even before he moved to Rome he had been criticised for the way he had handled abuse cases. Some speculated that it was a relief for Sydney that he was moved and a stroke of genius to place him at the helm of the financial reform because he would not be a pushover. Now, just three years into his five-year mandate, Pell has had to take “leave” from his Vatican position to face an Australian court. Although the charges have not been made public, there is speculation that he will be charged for covering up abuse and being an abuser.

At a press conference on Thursday morning in Rome, Pell strongly denied any wrongdoing and said that he would return to appear in court. “I am innocent of these charges, they are false,” he said. He complained that he had been subject to “relentless character assassination” during the two-year investigation and said that he looked forward to “finally having my day in court” so that he could clear his name.

In a statement, after the news broke of Pell being charged, the Vatican affirmed “its respect for the Australian justice system that will have to decide on the merits of the questions raised”. The statement went on to recall that Pell had co-operated with Australian authorities, repeatedly condemned abuse, supported the commission that Pope Francis set up to protect minors and, when a bishop in Australia, had set up systems and procedures to protect minors and provide assistance to victims.

The Pell debacle puts Pope Francis in a tight spot. First, there is now a senior and high-ranking official who is being charged. Since his election, Francis has appeared to offer new hope to victims by calling for action on abuse. He has also set up a Vatican commission to fight against abuse and help victims. The pope has said that sanctions would be imposed on clergy who are abusers and on bishops who covered abuse up. Will he eventually have to sanction Pell – whom he hand-picked to reform the Vatican’s finances?

This could also be a big blow for Francis’ agenda of financial reform. Pell could face a long legal battle. This means that proposed reforms could come to a grinding halt. The Vatican’s Secretariat for the Economy would lack direction. Just a few weeks ago Italian businessman and auditing expert, Libero Milone, resigned from the Secretariat. He gave no reasons for resigning. So, who now will be responsible for implementing financial management policies and standardised accounting procedures in Pell’s absence? Those who have worked in the office before Pell (and Francis) arrived on the scene could simply go back to doing things the way they were always done. Pell has in no way indicated that he might resign or step aside for the greater good of the reform while he is embattled in Australia.

Pope Francis may decide to put an interim head in. He may also wait to see what happens when Pell does appear in court. If it looks as if there will be a protracted legal battle he could end Pell’s contract and find a replacement. If he was to find an interim head, or a replacement, he might well look towards South Africa’s Cardinal Wilfrid Napier. Napier is a member of the Secretariat for the Economy, a senior church official, energetic, and offered his resignation as the head of the Archdiocese of Durban when he turned 75 in 2016 (which is routine for bishops). Either way, it’s a problem for the pope’s reform if the leader of that reform in a crucial department is suddenly not there.

Pell is also on the so-called “C9 Committee” representing Oceania. This committee meets with the pope regularly to advise him. They are his closest collaborators. Could Pell, with this cloud and the recent history of sex abuse in the church, stay on as an adviser? It is true that the court processes must be respected, but what reputational damage will this mess potentially create for Francis if he allows Pell to continue as a member of the group? This group, in many ways, is the one which assists Francis to lead the reform.

A day after the Pell story broke, the rumour mill was rife that the Vatican’s chief doctrinal watchdog and Benedict XVI appointee, 69-year-old Cardinal Gerhard Ludwig Müller, was to be replaced. Müller was appointed by Benedict XVI in 2012 for a five-year term. His term ended on 2 July. It is unusual for a man of Müller’s age and position not to be given a second term. On Saturday, 1 July, the Vatican announced that Müller would be replaced. He had met the pope on Friday and, apparently, had been told that he would be going and that it would be announced on Monday. But, it seems, Müller couldn’t wait for Monday. Sources say that he leaked the news to some conservative Catholic journalists. This prompted a storm on social media. The Vatican therefore made a statement and announced the change on Saturday – an unusual day for shuffles in personnel to be announced in Rome.

For conservative Catholics, Müller was seen as a safety net, the last “Benedict man” in a significant Roman office. Müller is close to the retired pope. He wrote his doctrinal thesis on the theology of Ratzinger.

In recent months Müller has indirectly criticised Pope Francis for his view that the church should be more merciful, and allow, under some circumstances, divorced and remarried Catholics to receive the church’s sacraments.

However, Müller, more than once, has insisted that there is no tension between him and Francis. He told a German newspaper that Pope Francis had said that from now on, no Vatican heads of department would be renewed after five years. He happened to be the first to reach the five-year mark.

For those who think Müller’s contract is not being renewed because he is conservative and attempting to block Pope Francis’s more progressive approach, think again. His replacement, fellow Jesuit Archbishop Luis Ladaria Ferrer from Spain, does not have the reputation for being a progressive. In fact, he is a representative of the more conservative constituency of the Jesuits. He was appointed to the Congregation for the Doctrine of the Faith by Pope Benedict in 2008 – which gives some insight into his theological position.

More significant, however, is that fact that two lay members (and past victims of clergy sex abuse) on the pope’s Commission for the Protection of Minors, resigned from the commission and cited Müller as the reason. One of the members, Irish abusive survivor Marie Collins, quit in March citing “unacceptable” resistance from Müller’s office as the reason. In May, the pope said that her criticism of the slow pace of processing a backlog of almost 2,000 cases was justified. Collins had been tapped by Francis himself in 2014 to be on the commission that advises the church on how to care for abuse victims and protect children from abuse by church workers. This may be a much bigger factor which has led to Müller not being given a second term. Müller’s going could be another attempt by the pope to try to make good on his “zero tolerance” pledge for abuse.

It seems as if the struggle to reform a 2,000-year-old institution might be much harder than Pope Francis realised. Despite his popularity and serene disposition, if anything is going to change, it will surely take its toll on the 80-year-old Argentinian. The toll might be even more taxing when those who are his closest allies, people he hand-picked, land up being obstacles. The real question after many ups and downs in this pontificate might be: Is it really possible to reform the Vatican?

On a happier note: Francis has something to smile about. Just before the news of Pell’s charges and Müller’s end were making headlines around the world, a prominent South African had a photo op with him. Olympic medallist, Chad le Clos, met Pope Francis last week. He tweeted after the meeting: “Thank you @franciscus for a truly amazing special day #vaticancity”. DM