Rugby: The Boks, the body language and the band of brothers 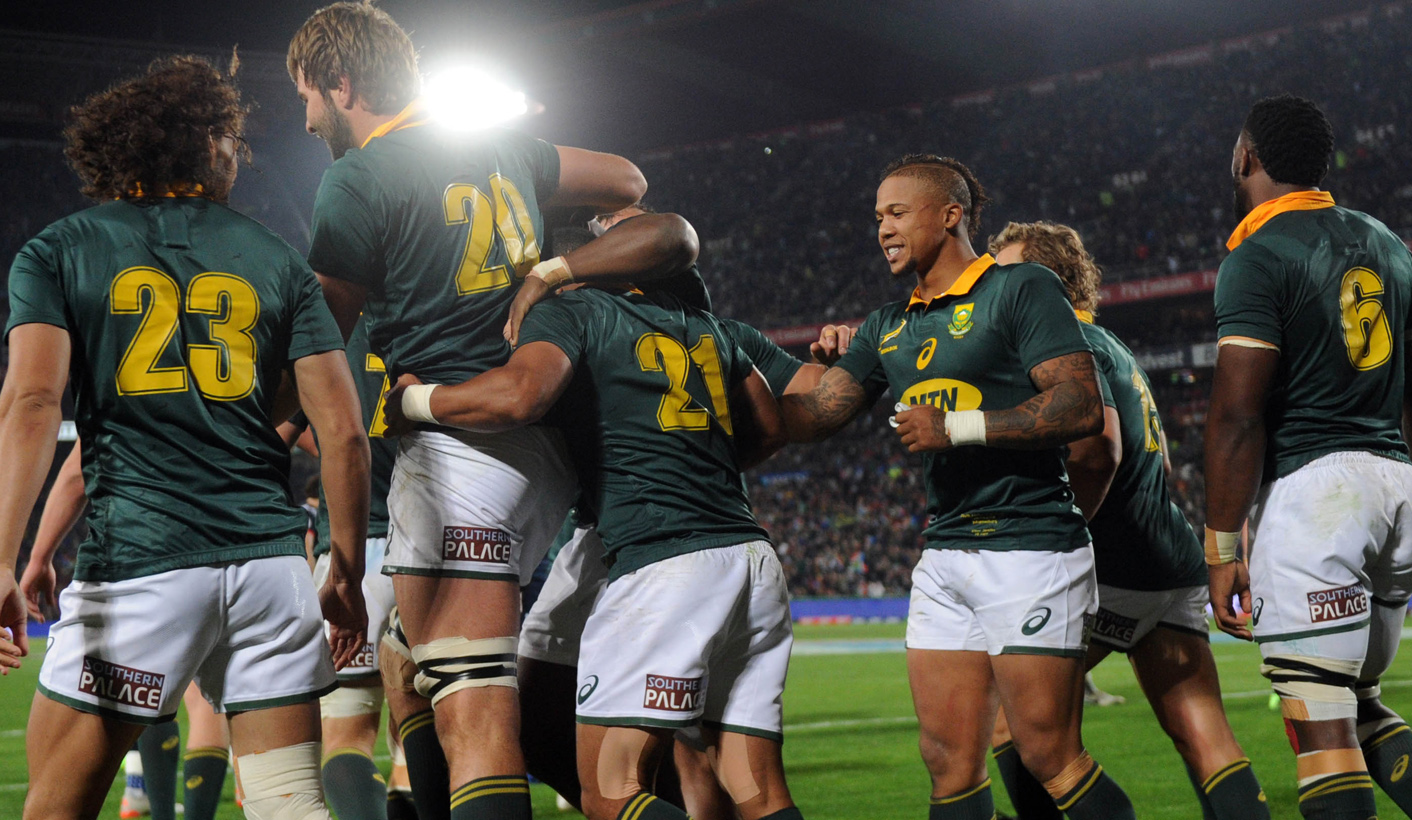 Sport is filled with clichés. Some exist to fill dead air, others exist because they are true. If you’d paid attention to the Springboks since the 2015 Rugby World Cup you’d have noticed a prevalent cliché: bad body language.

The side became so adept at impersonating teapots that they’d not be out of place on an afternoon at Buckingham Palace. You could hardly blame them. The lead-up to that competition and everything that followed was utterly miserable.

As the Boks racked up one embarrassing first after another, it always felt like the next forgettable first was just around the corner. Shrugged shoulders, folded arms, dropped heads and sometimes a reluctance to celebrate success hung over the team like a big, storm cloud.  That great all-encompassing South Africanism “shame” pretty much summed up how the team looked.

None of this is unusual, of course. Body language by its very nature is subconscious and instinctive. But teams are becoming increasingly aware of the messages this non-verbal language sends. Some sporting teams even go as far as to have somebody consult with athletes on how to change it.

Research, too, has found that bad body language can have a negative impact on performance. In 2008, researchers looked at the body language of soccer players before taking a penalty kick in a shootout. The group focused specifically in World Cups, Euros and the UEFA Champions League, a total of 36 shootouts and more than 300 kicks.

The data was interesting. Players who missed their kicks were more likely to display “rushed or avoidant” body language prior to taking their kick. Things like not making eye contact with the keeper or, what researchers call “occupying less temporal space”. Authors concluded that players with this “powerless non-verbal ” were being subconsciously influenced by the way they behaved.

Rugby is far more physical than soccer and there is less one-on-one time as there would be in a penalty shootout. But body language is still evident especially when a team approaches a match with a sense of dread – a culmination of all the poor results that lead up to the next . It’s not unreasonable to assume, then that the split-second decision making often required in intensely physical sports like rugby will also be influenced by body language.

Over the last three weeks, as the Springboks clinched a 3-0 whitewash over France, it seemed as if that negative body language had dissipated. Considering all the talk from Allister Coetzee about how he wants this to be a “clean slate” – we can consider this a tick in the “success” box.

Even during last year’s Test series against Ireland, where South Africa just managed to eke out a series win, their celebrations seemed stifled.

In the last three matches against France, they looked completely different. They didn’t always win pretty, but even when the going got tough, their shoulders rarely slumped.

If you have access to the highlights, pay close attention specifically to how the team celebrated Rudy Paige’s try over the weekend. By the time Paige crossed the whitewash, South Africa pretty much had the game in the bag. His try was the gravy, but the players celebrated as if it was match-winning.

Considering that Paige is one of the players who, since his debut, has been under intense scrutiny from the public for all sorts of contrived reasons, the obvious support he has from his teammates speaks volumes.

The players are quite obviously happy with each other’s success. They understand how tough it has been for some of their teammates, but they are all working towards a common goal and it shows.

It’s a small but notable difference compared to the Bok side of the last 18 months. None of this means that the team is suddenly back to being world beaters again. The coaching staff will know this and will have to guard against complacency and feeling as if though they have been vindicated. The fixtures for the rest of the year are going to be brutal.

But Coetzee and co do deserve a pat on the back for indeed starting the season on a clean slate, despite cynics having rolled their eyes and predicting more doom and gloom.

“We wanted to set the record straight and prove that we had good players, it’s self-pride,” the coach said after the team’s 35-12 win at Ellis Park on the weekend.

Indeed – some good players who do not get bogged down when things don’t go their way. Losing inspirational captain Warren Whitely just before kick-off over the weekend should have rattled them, but it didn’t.

None of this means the system is perfect. There are many broken pieces that exist right from grassroots to the top of professional structures. But it does show that even small tweaks to a broken system can have an impact elsewhere – that is the very definition of a system.

The knock-on effect is that players feel more comfortable expressing themselves. Their wins might have been ugly at times, but there were glimpses of what the side is working towards all through this tour. Hell, the backline even clobbered together a move or two – when last has anyone seen the Boks do that?

The most obvious change has been the captain and the addition of Brendan Venter. Despite the uncertainty surrounding his role with the Boks, Coetzee confirmed over the weekend that Venter will be staying on as a consultant. This is critical for the progression of this team.

the rugby championship, none of these stats will matter unless they learn how to score buckets of tries too of course. But considering how down in the dumps they were at the start of the year, one thing at a time, right? DM