Theatre Review: Marat/Sade, a visceral and enduring collision of history, theatre and politics 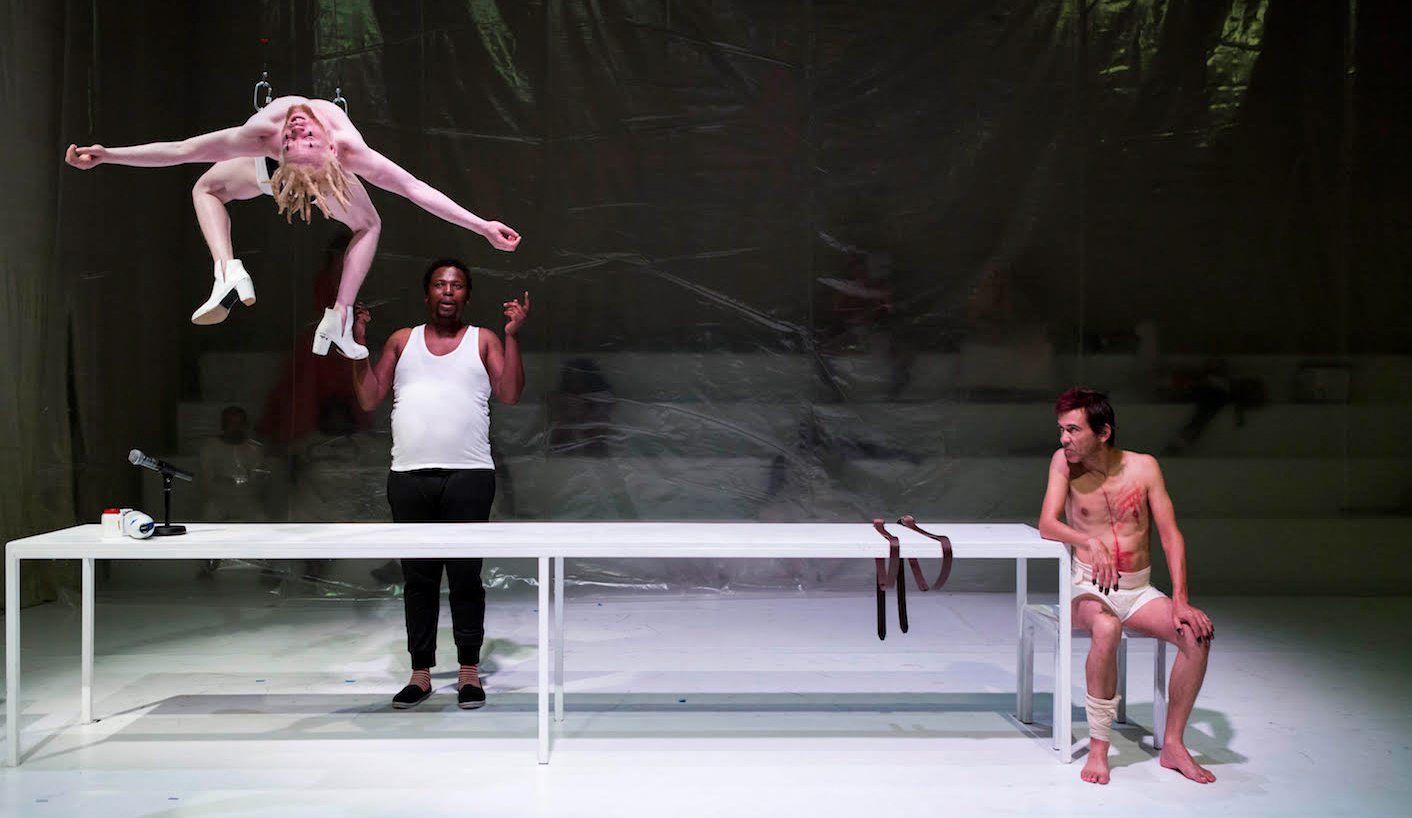 The local interpretation of Peter Weiss’ groundbreaking and Tony Award-winning modernist play – as topical today as it was in 1963 when it was first written – is a thrilling and disturbing spectacle of the grotesque in which an accomplished cast succeed in bleeding the script into a modern and violent post-911 socio-political reality filled with uncertainty and horror. By MARIANNE THAMM.

Revolutionary violence serves a mechanical function. It is aimed at destroying and disrupting the status quo. But what is it that arises in its apparently purifying aftermath? These are just some of the ideas explored in Weiss’ play, The Persecution and Assassination of Jean-Paul Marat as Performed by the Inmates of the Asylum of Charenton Under the Direction of the Marquis de Sade, more commonly known simply as Marat/Sade.

The play within a play is set in an asylum in 1808 where the unmedicated inmates are directed by fellow inmate, the Marquis de Sade, to re-enact a play, set in 1793 and culminating in the assassination of Marat, one of the most radical and idealistic voices of the French Revolution.

And while this is a play of ideas, ideology and spectacle, it not only serves to provoke thought but also a visceral engagement of the senses.

But before we time-travel to 1808, 1793 or even 2017, it is perhaps prudent to return to 1599 and the establishment of William Shakespeare’s Globe Theatre. For it is here that the role of theatre as political spectacle and its role in real life begins.

Historian and former director of the British Museum, Neil MacGregor, in his engaging 2012 excavation, Shakespeare’s Restless World, sets out the bloody and violent political and social landscape that prevailed when the Bard’s works were first brought to life on the stage of the Globe in 1599.

MacGregor’s book attempts not to look at Shakespeare’s texts or their meaning but the inner lives of the audiences who attended his plays in a highly contested political space. MacGregor does this by finding the symbolic meaning of objects found buried below what was once the auditorium of the Globe as well as other relics that have survived the period.

This was a time, writes MacGregor, of anxiety and of “secret agents, plotting in concealment the killing of the monarch, the overthrow of the state” and which must have sharpened “the edge of Shakespeare’s many speeches about assassination and conspiracy”.

One of these relics is the shrivelled eye of Edward Oldcorne, a Catholic priest who was killed for his religious beliefs. His execution was “a public spectacle, a crowd-pleasing scene in a theatre of cruelty which first drew, then horrified, then mesmerised and entertained huge numbers.

“Scenes of killing, dismemberment and decapitation were usual and were enjoyed in real life as in theatre. On London Bridge, theatregoers walked past severed heads on pikes. No surprise to see them carried on to the stage.”

There is, in fact, no real separation between the spectacle of life and that which passes for life in the theatre (and by this we exclude that which can be more accurately described as entertainment rather than theatre).

Jaco Bouwer, who has directed and designed this production, has rendered this tissue-thin separation through a translucent membrane which initially cordons off the audience – seated in the auditorium of the “asylum” – from the inmates on the stage and who mill about behind it as we wait for the production to start.

The inmates eerily press up against the membrane, peer through rips in the fabric and attempt to pierce it or slip through it. The membrane at first serves to contain and separate them in their designated performance space.

They are insane, we are not. Or is that so?

It is Mncedisi Shabangu and Charlton George as the haughty Marquis de Sade and the idealistic and puritanical Jean-Paul Marat who serve as the pivotal characters around whom the spectacle unravels. These are demanding mental and physical roles that both actors hold with mesmerising authority.

They are complemented by a large and accomplished cast who are expected to maintain an energetic and feverish pace as the spectacle reaches its climax. Each cast member brings to the piece a concentrated and concerted effort which serves to hold the crumbling centre. Particularly notable is Bongile Mantsai as the priapic Duperret, a high-born Girdondin gentleman and deputy of the Girdondin party which was part of the post-revolutionary French Convention. Also Tinarie van Wyk Loots as a laconic narcoleptic patient, cast as the murderous Charlotte Corday, sent to assassinate Marat in his bath, remarkably holds the visceral reality of tragedy, pain, and endless cycle of suffering.

“During the struggle, heroes died so that we can govern; now innocent people die in Marikana and psychiatric wards because we govern.”

He also references the number of South African artists – including Johnny Dyani, Mongezi Feza as well as Dumile Feni and Cyprian Shilakoe – “who lost their minds and died in poverty”.

It is this underlying matrix where the past meets the present and perhaps the future which renders this revival so powerfully prophetic. The point is, we do not learn from history.

Marat/Sade runs at the Baxter Flipside until March 25. Performances start at 19:30. DM