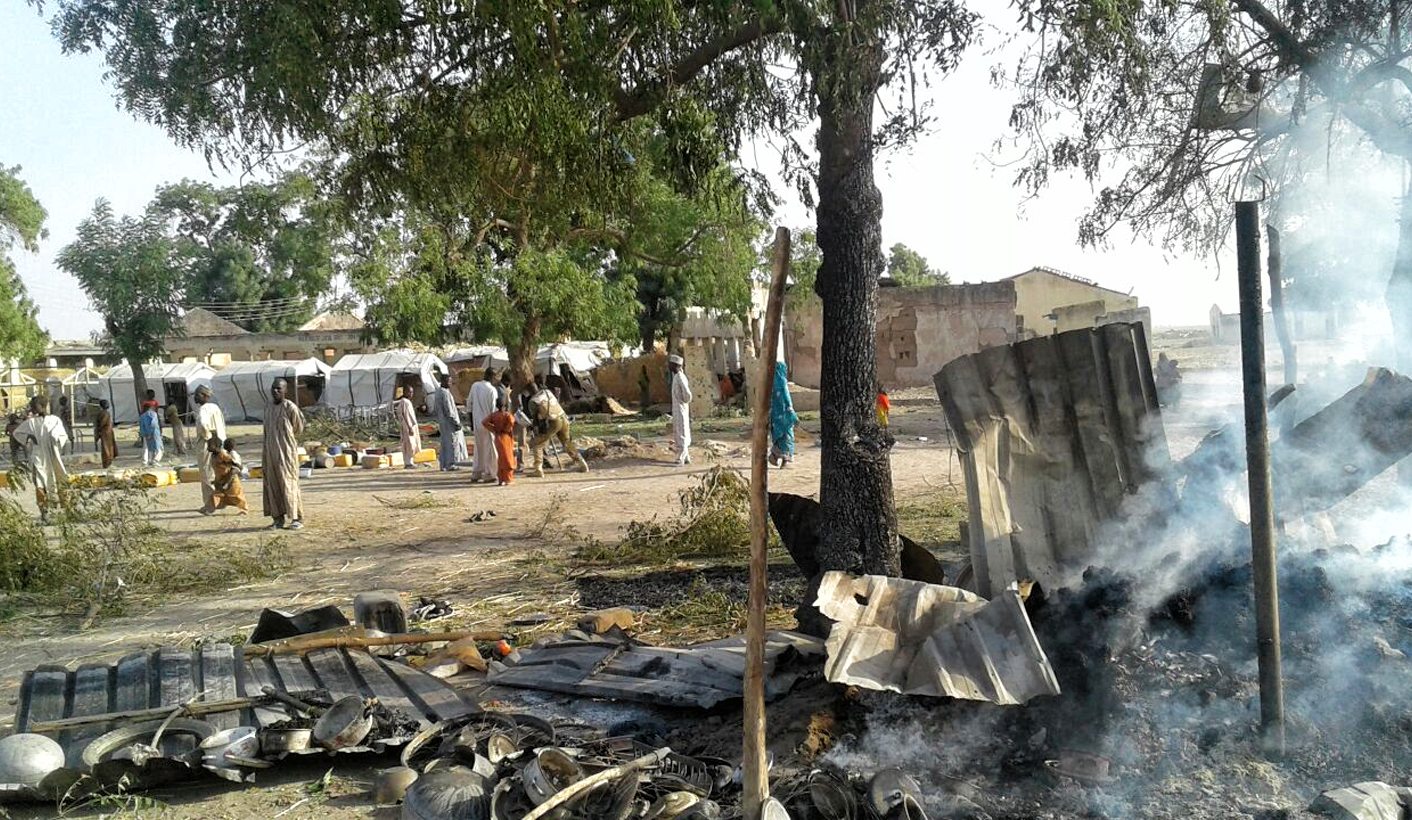 More than 100 people were killed this week when the Nigerian air force accidentally bombed a camp for internally displaced people. But the government’s grovelling apologies fail to mask a broader truth: that for Nigeria’s armed forces, civilian lives are cheap. By SIMON ALLISON.

Camps for internally displaced people (IDPs) are supposed to be a refuge. In north-east Nigeria, home to the world’s worst humanitarian crisis, this means a respite from endemic conflict and malnutrition caused by prolonged fighting between Islamist militant group Boko Haram and the Nigerian government.

These camps are not supposed to be a target. And yet, on Monday at one such camp in Rann, Borno state, a Nigerian air force jet screamed overhead and dropped its deadly payload on the unwitting civilians below.

At least 100 people were killed. The bomb was indiscriminate, as they tend to be: the death toll included men and women, children and the elderly, aid workers and the people they were sent to help. Many more were injured.

The Nigerian government said it was a mistake. In a tweet – now an acceptable medium of communication for heads of state, even in situations as grave as this one – President Muhammadu Buhari said: “I received with regret news that the Air Force, working to mop up BH [Boko Haram] insurgents, accidentally bombed a civilian community in Rann, Borno State. I sympathise with the families of the dead, and with the injured.”

But even in this apparent admission of guilt, the families of the victims of the Rann attack risk being shafted again. By characterising the incident as an accident, the government may be angling not to have to pay compensation.

“Even if there is no evidence of a wilful attack on the camp, which would be a war crime, the camp was bombed indiscriminately, violating international humanitarian law. Victims should not be denied redress merely because the government decided the bombing was accidental,” said Mausi Segun, senior Nigeria researcher for Human Rights Watch.

As accidents go, however, the bombing of the Rann camp was especially inexplicable. “We [are] speaking here about an area that is controlled by the army fully. The whole camp is controlled by the army and no one can come in or out without being checked, so that’s a shock, as well as the fact that this was a very densely populated place that was full of civilians who already lived there and internally displaced persons who had come there,” said Hugue Roberts, head of emergencies for Doctors Without Borders, speaking to The Guardian.

We may never know exactly why the IDP camp in Rann was bombed. But we do know that this attack is consistent with a broader pattern: that for Nigeria’s armed forces, civilian lives are cheap.

With this track record, Nigerians looking to flee the brutality of Boko Haram are entitled to ask themselves whether their government places any more value on their lives.

“It is unacceptable that so many civilians were killed and wounded. All measures must be put in place to ensure that such a tragic incident never happens again,” said Eloi Fillion, Head of Delegation for the International Committee of the Red Cross in Nigeria, in response to the Rann bombing.

These is an all too familiar sentiment, however – one that has gone unheeded by the Nigerian military, even when it comes from the global superpower. In his visit to Nigeria in August 2016, US Secretary of State John Kerry warned the military against committing human rights abuses in the name of counterterrorism.

“It is understandable that in the wake of terrorist activity, some people are tempted to crack down on everyone and anyone who could theoretically pose some sort of a threat. I caution against that. Extremism cannot be defeated through repression,” said Kerry.

Extremism cannot be defeated through repression. If we can ignore the hypocrisy of the source – the US hardly has a sparkling human rights record – Nigeria’s armed forces would be wise to remember these words. No doubt Nigerian civilians will be grateful. DM

With additional reporting by Kuei Battal.

Photo: A handout photo made available by Medecins Sans Frontieres (MSF) shows the aftermath of a bombing allegedly carried out by the Nigerian Army at a government-run camp for internally displaced persons in Rann, Nigeria, 17 January 2017. According to MSF, at least 52 people were killed and some 200 injured in what is believed to be an accidential aerial bombing by a Nigerian Army fighter jet targeting Boko Haram militants. EPA/MSF HANDOUT