Elephant Dawn: The high cost of hanging out with elephants 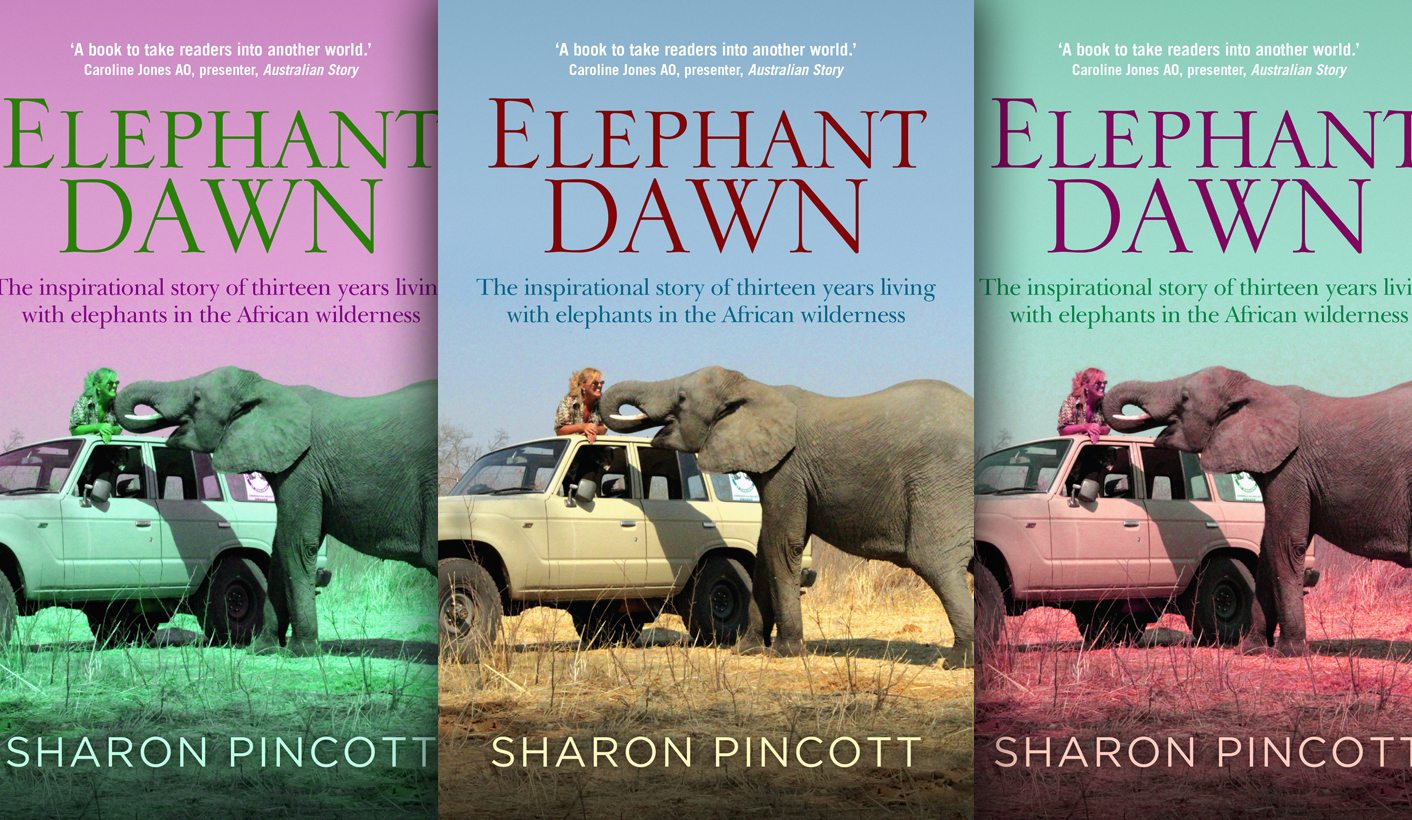 How could you tell males from females? Were the elephants left-tusked or right-tusked? Who were the matriarchs? Who belonged to which family? How did they communicate? Would she ever be able to communicate with them? By finding the answers to these questions, Sharon Pincott came to be to elephants what Dian Fossey was to gorillas and Jane Goodall was to chimpanzees. By DON PINNOCK.

Given how long humans have lived in the company of animals, both tame and wild, the study of animal behaviour is surprisingly young. It only began well into the 20th century with the lab-based work of men like Ivan Pavlov, Konrad Lorenz, John Watson and BF Skinner. However, immersion fieldwork, involving long sojourns in uncomfortable, dangerous places in the company of wild animals, was pioneered by women.

In the 1960s the anthropologist Louis Leakey realised that primate behaviour was essential to understanding how human ancestors had lived. What he needed, he said, was “a mind uncluttered and unbiased by theory, a real desire for knowledge and a sympathetic love and understanding of animals”. A young, untrained assistant named Jane Goodall put up her hand, convincing him that one could never appreciate the richness of animal social interactions without observing them for at least a full generation.

She left for Gombe National Park in Western Tanzania and a legend was born. Her pioneering work showed the centrality of empathy and patience in building trust with wild creatures.

Among her many discoveries was that chimps make and use tools, a skill thought to be uniquely human. She also broke with many research conventions, including by giving the chimps she observed names instead of numbers. We owe almost everything we know about how chimpanzees live in the wild to Dr Jane Goodall.

Shortly after she settled in Tanzania, Leakey convinced another young woman, Dian Fossey, to start documenting the lifestyle  of gorillas. She was to gorillas what Goodall was for chimps, spending more than two decades studying their complex social structures and family life. She found, as did Goodall, that her research subjects were unique individuals capable of tenderness, kindness and grief that more than matched their legendary strength and ferocity.

Tragically, Fossey’s work was engulfed by political turmoil and bush-meat poaching in the Congo and she fled to Rwanda, where she was  murdered two decades later almost certainly due to her opposition to poaching and wildlife tourism.

What Goodall and Fossey were for primates, Cynthia Moss, Joyce Poole and Sharon Pincott have been for elephants. Moss and Poole have witnessed many generations of elephants in Kenya’s Amboseli National Park, documenting their complex relationships, communication system and deep compassion.

Sharon Pincott was a later arrival in immersion fieldwork, landing in western Zimbabwe in 2001. An Australian corporate executive, she was – like Goodall and Fossey – untrained in field biology. However, she fulfilled Leakey’s requirement for a mind uncluttered by theory and a sympathetic love and understanding of animals.

Her timing was not great. In 2001 the country was buckling under the iron grip of Robert Mugabe, inflation was going through the roof, tourism was drying up and poaching was on the rise. Thousands of people were scrambling to flee Zimbabwe while she was heading in the opposite direction. War veterans were invading farms and racial tensions were rocketing. When she arrived at Hwange National Park someone quipped that she’d be more likely to see an elephant than a white person.

She dumped her few possessions in a shack on Hwange Estate abutting the park and, self-funded and unattached to any institution, began to learn about elephants, particularly a group known as the Presidential Herd. There was a lot to learn.

How could you tell males from females? Were the elephants left-tusked or right-tusked? Who were the matriarchs? Who belonged to which family? How did they communicate? Would she ever be able to communicate with them?

She assigned letters to each group, then named each elephant in the group starting with that letter. Slowly they were transformed from “great lumps of endearing grey” to individuals. Hanging out, just watching, day after day, she first bonded with the ‘Ls’, particularly its matriarch, Lady.

“When I sit with elephants in the wild, even for a short time,” she would write, “I always feel immensely humbled to be sharing their lives. They are the world’s largest land mammals and are remarkable in every way. When not harassed, they are incredibly calm, quiet, gentle and inquisitive, something you cannot imagine such enormous animals could be.”

She moved to a single-roomed rondavel where I met her, drinking scarce tea under a tree round a table made from a discarded workbench. Was she not lonely here, all alone in the wilderness? She looked puzzled by my question. “With all these elephants, how could I be…?”

Pincott didn’t force herself on elephants. She would park in one spot, sit on the roof of her battered old Range Rover, and let them come to her. Over the months, then years, they did. Lady would stand next to the vehicle and close her eyes, contentedly. One day Pincott reached out and put her hand on Lady’s tusk. She didn’t move.

On another occasion she stroked her trunk and Lady seemed to enjoy it, puckering the great appendage where it was touched. Eventually the huge elephant would come when Pincott called, explore her body and the inside of the truck and hold her hand in the tip of her trunk. When her babies were born she brought them for review.

But being a white foreigner in a poor, hungry country ruled by some of the most corrupt officials in Africa was never going to be easy. She was living in a game-rich area and her presence was getting in the way of those who wished to hunt and poach. The threats began to mount.

She was verbally abused by the governor of the region, a total stranger ran after her vehicle brandishing an axe, and she was formally accused of being a spy for the Australian government and “attempting to frustrate Zimbabwe’s land reform programme”. She found she was on a Wanted list at the local police station. She was told: “In this country, if you speak out it’s at your own peril.”

Pincott’s reaction was very Australian: “Oh for God’s sake!” She stayed on, alone, hanging with elephants, making notes, revelling in the utter beauty of the African bush. She made trips home but kept coming back to her rondavel. The harassment kept up, abating at times, then escalating to frightening levels. “My relationship with this country,” she wrote, “is starting to feel like an abusive marriage. I just keep coming back for more.”

A documentary film of her work, All the President’s Elephants, won international acclaim but didn’t endear her to the government. Elephants were being poisoned with cyanide, their tusks hacked out. Government teams were capturing baby elephants for sale to Chinese zoos.

Local and regional officials were making land grabs in protected areas and inviting hunters. Government ministers she lobbied promised to “do something about it” but did nothing. She would go to bed with the sound of rifle fire.

The elephants scattered and those she saw came to her vehicle as always but fled, ears back, at the slightest other human sound. Eventually Lady and her herd disappeared. Pincott searched but never found her. She was, almost undoubtedly, dead.

After 13 years of intensive elephant interaction and constant harassment, Pincott snapped. She’d simply had enough. She gave away her possessions, packed her few essentials and field notes in a couple of suitcases, sold her vehicle and headed for the airport. What she would do now would be to write.

Her book, Elephant Dawn, is heartwarming, funny, incisive, searingly honest and at times deeply sad. It’s an indictment of Zimbabwe’s wildlife management, a plea for Africa’s elephants and an insight into the mind of one of the earth’s most intelligent creatures.

That a person of such integrity and tenacity should be forced to abandon such essential work in the face of poaching and official opposition is a real danger signal about the future of elephants in Zimbabwe – and Africa. DM