Somalia: The baby in a plastic bag

Somalia: The baby in a plastic bag 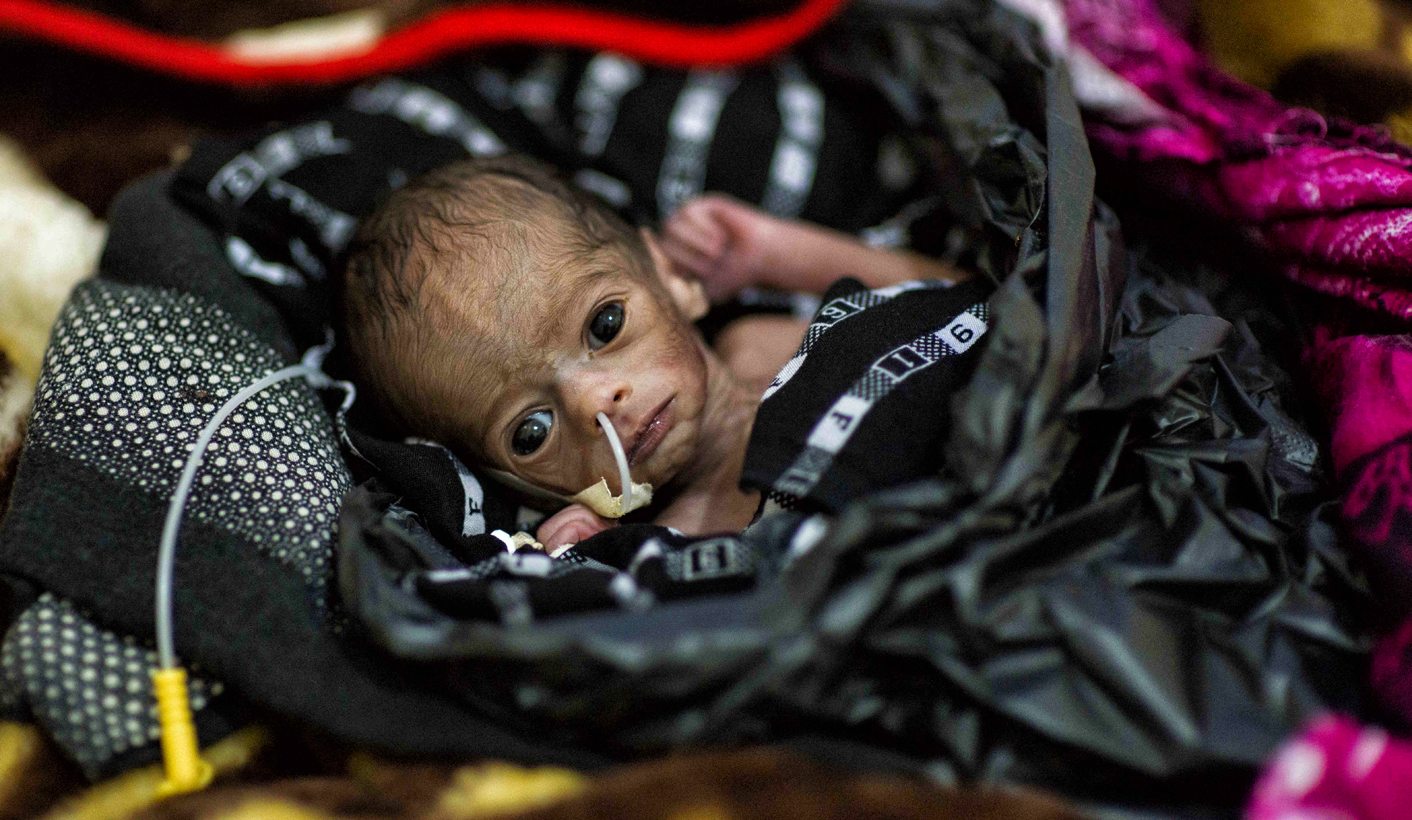 Surviving motherhood and infancy in Somalia is a tenuous thing given what the country’s healthcare professionals are up against. By KUN LI.

Fifteen-day-old Faadumo lies quietly with her big, dark eyes wide open. Her tiny head and dainty fists rest on a nest of blankets, starting with a black shawl. A second one adorned with white dots is layered on top. She is then tucked in a bigger, thicker blanket in a maroon and creamy colour. In between these wrappings is one more layer that is smooth, reflective and uncharacteristically thin for a blanket. It is a black plastic shopping bag.

Faadumo was born prematurely at seven months. Her mother, who was only 15, died during childbirth. The plastic bag is to keep her warm, as is the single-bed room with no window that she is staying in. A premature baby like her should, of course, be kept in an incubator. But here in Bosaso General Hospital in the state of Puntland, Somalia, a plastic bag and many blankets are the best doctors can do to keep her warm – and alive.

“We need incubators and our staff also need training on how to use them,” says Dr Mohamed Said, the pediatrician at the hospital.

Besides being premature, Faadumo is also malnourished. She weighed 1kg at birth, and weighs not much more – 1.1kg – now.

When asked about the challenges his ministry faces, Abdirizak Hersi Hassan, Director-General of the Ministry of Health in Puntland, sums them up in two words: “Too many.”

Poor infrastructure, shortage of personnel, equipment and inadequate training, the list goes on and on. The indicators tell the story of what Abdirizak and his ministry are up against:

What makes the Somali narrative so much more distressing than anywhere else in the world is this: the struggle for a woman to survive while giving life, and for a child to survive to see his/her fifth birthday, has been going on for far too long.

Since the collapse of the central government in 1991, Somalia has been in an almost constant state of war. Today 1.1-million Somalis are displaced inside the country and another 1-million as refugees in neighbouring countries. Its health systems are mostly supported by development partners and funded by donors. Unicef alone supports 70% of Somalia’s health facilities. “Without such support,” says the Director General, “the health systems will collapse.”

An essential health package for all

At the maternity ward in the mother and child health clinic in 100 Bush Internally Displaced Persons camp, Malyuum Osman, 29, rests with her one-day-old newborn, Mohamed. Over the years she has suffered two miscarriages and seen two children die – a daughter from illness, and a boy in an accident.

“I was carrying a bottle of water, and it was too heavy – I tripped and fell and lost the baby,” she says of how she miscarried last time. “The daughter died from diarrhoea. She was not even two years ol.” Malyuum weeps when she thinks of them.

Despite the basic conditions here, the clinic, staffed by 14 midwives and nurses, is doing wonders for the local population of 15,000 people living in the various displacement camps. It is one of the many clinics supported by Unicef under the Joint Health and Nutrition Programme, a five-year ambitious plan to save mothers and children from dying unnecessarily in Somalia.

A critical component of the programme is to ensure a core package of reproductive, maternal, newborn and child health and nutrition services to all Somali women, children and families. Since 2012, 5.7-million people, out of a total population of 12.3-million, have had access to such services offered free of charge in public health facilities like 100 Bush MCH.

Under the scheme, more women are being assisted at birth by skilled birth attendants; more children are receiving treatment for major childhood killer diseases, especially diarrhoea, pneumonia and malaria, and protected with immunisation; and the treatment and prevention of malnutrition is on the rise.

However, there are currently no firm plans for the continuation of the programme in 2017 and beyond. Unicef, along with partners, is mobilising resources to keep the health services open and the 2,000 health workers covered under the programme – out of 3000 in the entire country – paid.

Soon Malyuum will be able to go home with the baby to her three other children. Life has been hard and will continue to be hard for the single mother. The family of five, now including baby Mohamed, survives on the $2 a day she makes by cooking for the workers at construction sites. But she remains optimistic.

“I pray to Allah to grant my children health,” she says. “I want a good life – a beautiful life – for us all.” DM

To find out about the fate of Faadumo and learn more about Unicef’s work for mothers and babies in Somalia, write to us at [email protected].

Main photo: Faadumo Mohamed Ahmed, 15 days old, was born prematurely. Her teenage mother died from complications while giving birth to her. She is being cared by her mother’s sister and other relatives. © UNICEF Somalia/Sebastian Rich