BREAKING: SARS Wars Endgame – Hawks order Pravin Gordhan and others to “present” themselves 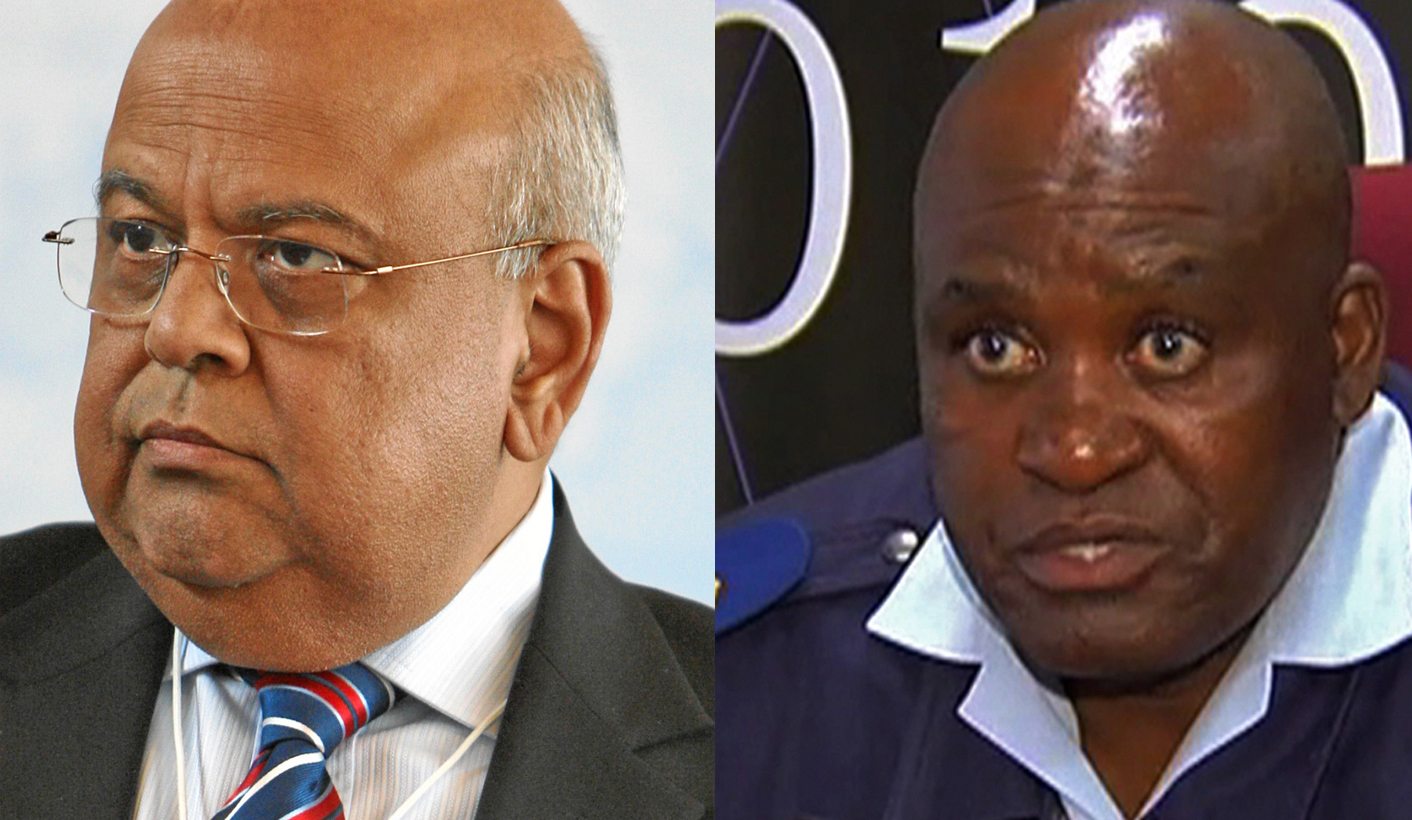 The Hawks are again circling Pravin Gordhan as well as four SARS officials, former Deputy Commissioner Ivan Pillay, Group Executive Johann van Loggerenberg, Pete Richer, former SARS head of strategic planning, and initial head of the investigative unit, Andries van Rensburg, who have all been ordered to report to the Hawks in Pretoria on Thursday for warning statements. The threats of criminal action relate to allegations of an alleged “rogue unit” located in SARS. Pravin Gordhan has been in the Hawks cross-hairs since accidentally landing back in the hot seat as Minister of Finance in December. By MARIANNE THAMM.

Andre van Rensburg, original head of the unit, presented himself to the Hawks in Worcester. Former spokesperson Adrian Lackay has not been served with any letters or notices. The four former SARS officials who have been asked to present themselves to the Hawks on Thursday at 10am are Gordhan, Pillay, van Loggerenberg and Pete Richer, former SARS head of strategic planning.

The convoluted SARS “rogue unit” saga appears to be heading for a dramatic climax as the Hawks are poised to finally make a much anticipated move on Finance Minister Pravin Gordhan this week. This in spite of Gordhan’s answering of 27 questions personally delivered by the Hawks head Lieutenant-General Mthandazo Ntlemeza in February with regard to the so-called “rogue unit” in SARS.

Gordhan has for some time, since his reinstatement as Minister of Finance in December after President Jacob Zuma’s disastrous firing of Nhlanhla Nene, been viewed as an obstacle thwarting the interests of individuals linked to Zuma including SAA’s Dudu Myeni, current SARS Commissioner Tom Moyane as well as the Gupta family’s interest in the country’s nuclear deal, among countless others.

In May Gordhan released a public statement saying that earlier reports of his arrest had been distressing for him and his family and urged South Africans to “protect the integrity of the treasury”.

“I cannot believe that I’m being investigated and could possibly be charged for something I am innocent of. Throughout my 45 years of activism, I have worked for the advancement of the ANC, our Constitution and our democratic government,” he said.

Daily Maverick has been reliably informed that Gordhan, Pillay, Van Loggerenberg, Lackay, as well as the original 2007 head of the unit, Andries “Skollie” van Rensburg, have all been asked to report to the Hawks at 10am on Thursday. Pillay, Van Loggernberg, Lackay and Van Rensburg were sent letters informing them of the charges they will face. Gordhan was informed that he would, along with the other, be receiving a “warning statement” given to an accused person before they are charged with an offence and to warn them of their rights in terms of the Constitution.

Daily Maverick also learned that Pillay, Van Loggerenberg, Lackay and Van Rensburg have been informed by the Hawks that each of them face possible charges in relation as to how the unit was formed. Pillay will also be questioned in relation to his pension payout and Van Loggerenberg in relation to a charity he ran. In addition to it, Pillay will also face questions about the alleged “project Sunday Evenings” and Van Rensburg’s (former head of the unit) involvement in allegedly bugging the offices of the National Prosecuting Authority in 2007 at the behest of the then Directorate of Special Operations, or the Scorpions, who were investigating police commissioner Jackie Selebi.

Hawks spokesperson, Brigadier Hangwani Mulaudzi, told Daily Maverick that he did not have a “mandate to discuss any case or any confidential information attached to any case that is still under investigation. Any matters related to this enquiry is mere speculation and we will also not comment on it.”

When approached for comment on the matter, Van Loggerenberg, Pillay and Lackay declined.

Earlier this year the Hawks sent the 27 questions to Gordhan who was SARS Commissioner when a request for a unit with special investigative capacity was signed off in 2007. This was done with the knowledge of then Finance Minster Trevor Manuel and in agreement with the NIA (National Intelligence Agency), who was to partner the unit in an attempt to curb the illicit economy.

Gordhan replied to the questions stating that, according to legal advice, the establishment of the unit had been lawful, that the finding by the Sikhakhane Panel (one of four investigations into the unit) that the establishment of the Unit contravened the National Strategic Intelligence Act was “wrong and based on a superficial and clearly mistaken reading of the aforementioned Act” and that the unit had been “an essential part of SARS’ enforcement strategy as it is with most tax and customs administrations globally.”

All of this also had been in line with then President Thabo Mbeki’s announcement in his 2007 SONA that government would “start the process of further modernising the systems of the South African Revenue Service, especially in respect of border control, and improve the work of inter-departmental co-ordinating structures in this regard, intensify intelligence work with regard to organised crime, building on the successes that have been achieved in the last few months in dealing with cash-in-transit heists, drug trafficking and the poaching of game and abalone”.

Under Gordhan, SARS was turned into one of the most efficient government departments. The National Research Group, as it was later to be named, was responsible for raking in millions in unpaid taxes and for investigating the criminal underworld, including abalone smuggling, rhino poaching, the importation of grey goods as well as drug and tobacco trafficking.

Some of the unit’s successes included a R40 million fine paid by former Hyundai SA boss Billy Rautenbach who had evaded local authorities for ten years, nailing of underworld drug lord Glen Agliotti, as well as investigations into billionaire Dave King’s tax affairs. The unit’s apparent crime/mistake was that it also began sniffing around individuals and companies who had alleged dealings with President Jacob Zuma and his family.

The “rogue unit” narrative was first advanced by a former NIA (National Intelligence Agency) operative Dr Mandisa Mokwena, a SARS group executive who headed the Segmentation and Research Division and who was later charged with 40 counts of fraud, racketeering and money laundering. It was also forwarded by State Security Agency double operative Pretoria attorney, Belinda Walter.

Since then at least four “investigations” have been conducted including the controversial KPMG report, which cost taxpayers R23 million and which has still not been released.

Some of the allegations included that the unit, headed by Johann van Loggerenberg, had gone “rogue”, had spied on politicians including Jacob Zuma, had set up a brothel and had used a slush fund.

Walter was a double agent for the SSA and British American Tobacco (BAT) while she worked as an attorney for BAT competitors Carnilinx. She also chaired the Fair-Trade Independent Tobacco Association (FITA). After a relationship between Walters and Van Loggerenberg turned sour, in 2014 Walter lodged a complaint with the HAWKS and SARS.

All of this loops back to 2013 when Pillay, shortly after being appointed as acting Commissioner of SARS, announced that the revenue service was requesting the NPA to prosecute 15 local tobacco manufacturers and importers for tax evasion and illicit trade in an attempt to collect around R12 billion in unpaid taxes.

On 14 November SARS wrote a letter to the Tobacco Institute of Southern Africa (TISA), and the Fair Trade Independent Tobacco Association (FITA) as representatives of the majority of the stakeholders in the tobacco industry in South Africa. The bodies were advised that SARS had implemented programmes to monitor and increase compliance particularly with regard to the tobacco industry identified as “as one such high risk area for reasons which include the on-going trade in illicit cigarettes.”

Tax and Customs Enforcement Investigations (TCEI), a new division that fell under Gene Revele, was mandated to investigate serious non-compliance issues and gathered information on the tobacco industry.

About 18-months later, Pillay and several other top officials, all found themselves jobless.

This after the Sunday Times, under then editor Phylicia Oppelt, was instrumental in publishing reports on the “rogue unit” and which subsequently directly led to new Commissioner Tom Moyane culling SARS top leadership.

The Sunday Times, under its new editor Bongani Siqoko, later apologised for the newspaper’s role in the “rogue unit” saga. He admitted that a 9 November 2014 report that the unit had run a brothel was not true and that this had merely been an allegation by a disgruntled former member of the unit.

“In another article in the same edition, we reported incorrectly that Johann van Loggerenberg had written a ‘confession’ letter to SARS commissioner Tom Moyane admitting that he had indeed run a ‘rogue unit’. The document contains no such confession. It was, in fact, a denial. More errors were repeated in other reports, such as ‘the infiltration of politicians as bodyguards’, ‘breaking into homes and conducting house infiltrations’, ‘running front companies’ with secret funds of over R500-million, and ‘spying on taxpayers and top cops’,” wrote Siqoko.

Earlier this month, an anonymous Twitter account @EspionageSA leaked the largest data dump ever pertaining to British American Tobacco’s alleged role in tax evasion, bribery, corruption and industrial espionage in South Africa. Hundreds of affidavits by whistle blowers, photographs, lawyers letters and sound clips were leaked by the account holder and linked to a Google docs folder (owned by ‘Black Widow’) and suggesting serious criminality on the part of British American Tobacco. BAT responded to the leaks with a standard, unsigned statement that it did not condone illegal behaviour.

The Hawks, in the meantime, have responded that they are not investigating these leaks and the serious allegations that BAT might have destabilised a state institution and been involved in bribery and industrial espionage. Brigadier Mulaudzi told Daily Maverick “we only comment on official complaints and the BAT is one of those that was leaked to the public and no formal docket has been opened.”

This suggests that, incredibly, until a private citizen or someone else lodges a complaint with regard to the massive and serious leak the Hawks are going to ignore it and go after South African former SARS officials instead.

The response by the Hawks is curious and inconsistent as in March 2015, Minster of State Security, David Mahlobo, announced that government “noted with great concern the allegations of espionage against the Head of the Office of the Public Protector [Thuli Madonsela] and certain political leaders in our country A search conducted on these allegations made, led government to the following website: africainteligenceleaks.wordpress.com, including other social media platforms.”

It appears that law enforcement agencies, when it comes to probing allegations that Madonsela was a “CIA agent” are prepared to investigate an Internet leak while this strangely does not apply to British American Tobacco. DM