Zimbabwe: If not Mugabe, then who? 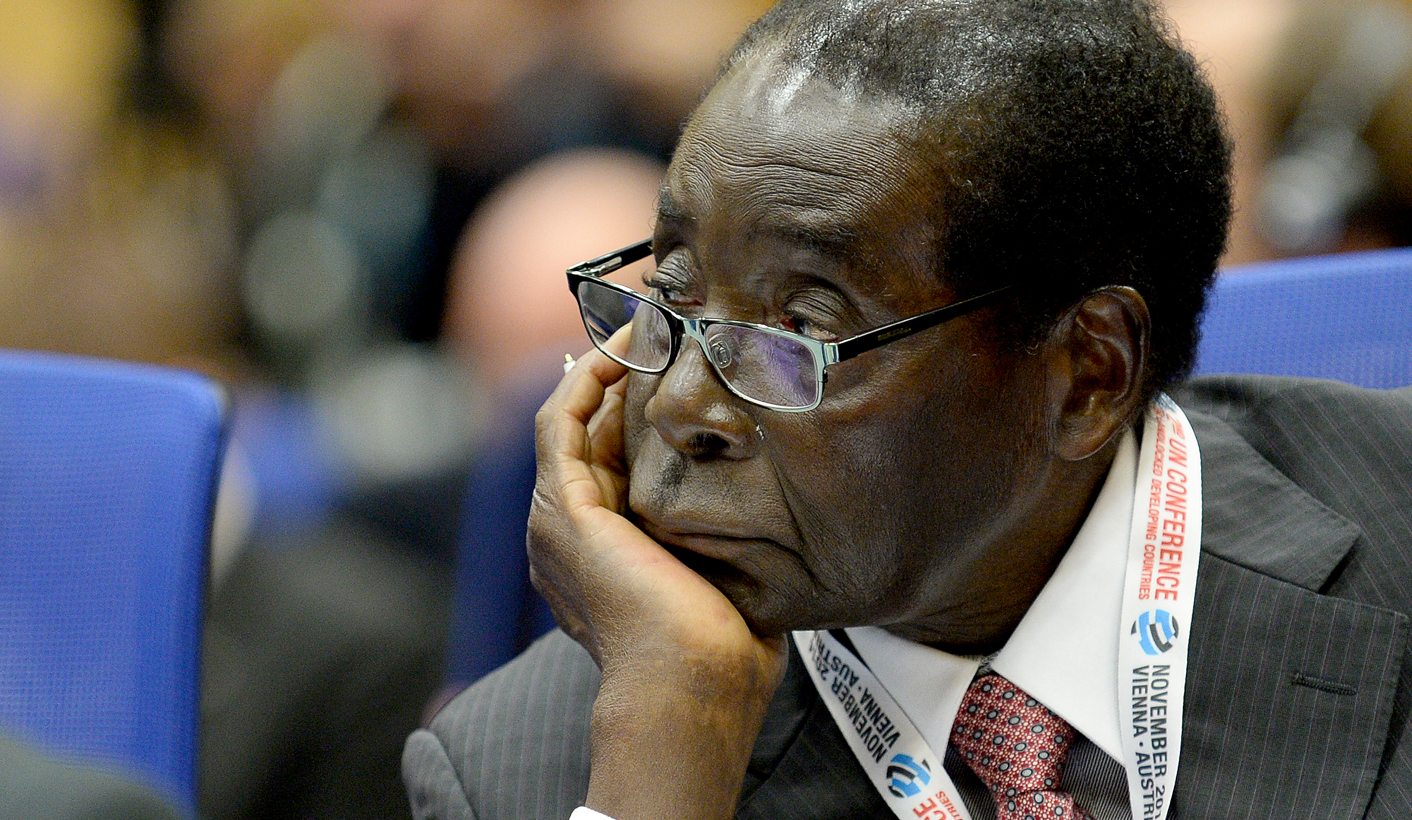 President Robert Mugabe insists that he is fit and fully in control of Zimbabwe. Given his extraordinary longevity, it’s probably best to take him at his word. Nonetheless, time is against the nonagenarian dictator, and increasingly the political calculus is weighted against him too. But if he weren’t in charge, who would be? SIMON ALLISON looks at the likely successors, and how they might make it to the top.

On Wednesday, Robert Mugabe had an instruction for members of my tribe. “Journalists, tell those you are representing that Robert Mugabe is still here, well and strong. This is me, and my people are going to have me for some time,” he said, in a rousing speech delivered at a supporters rally in Harare.

We won’t be implementing this instruction on these pages. Mugabe’s right on one thing: yes, he’s still here, he’s still in charge. But no one’s quite sure for how long, because recent events have left the Zimbabwean president weaker than ever before.

The #ThisFlag campaign represents an unprecedented expression of people power which if harnessed effectively could topple the whole system, Arab Spring-style. The discontent is fuelled by the extended economic crisis, which also means that Mugabe is struggling to maintain the patronage networks that have shored up his power for so long. Within the ruling party, potential successors can taste the blood in the water and are frantically manoeuvring for position, while the official opposition is drawing up frameworks for transitional authorities.

Is this the end game? While history tells us that it is foolish to bet against Mugabe, he has never been quite this fragile.

But even if Mugabe does fall, it’s far from clear who might follow him. These are the main contenders:

Once unthinkable, the president’s wife is now a top contender for the succession. She’s been pushed vigorously into the limelight by her husband over the last few years, not that she needed much pushing. As well as her obvious affinity for the trappings of power, she is also thought to worry – with reason – about the fate of her and her children under a new regime.

She would not be a popular choice. Stories of lavish spending and poorly-judged comments – she told a joke recently, the punchline of which was that Zimbabweans never use their brains – mean that she’s perceived as out of touch. But she carries the full weight of the president behind her, and if formally anointed by him she might be difficult to displace.

The ultimate survivor, Moyo has an uncanny ability to sniff out the prevailing political winds before anyone else – and get ahead of them. His cabinet position is less important than his unofficial designation as spin doctor-in-chief for the regime. Even Britain’s Alastair Campbell could learn a thing or two from Moyo’s tactics, which include, when necessary, rewriting editions of the state-run Herald newspaper.

Moyo is a key figure in the G40 faction of the ruling party, which has been instrumental in pushing Grace Mugabe’s leadership credentials. Most analysts suspect this is a cover for Moyo’s own ambition, or that of others within the grouping, like local government minister Saviour Kasukuwere. But outside the corridors of power, Moyo doesn’t have a natural constituency, nor any of the kind of enforcers that could help him fight his way to power.

Not too long ago, in the wake of the sacking of former VP Joice Mujuru, Emmersom Mnangagwa looked like a shoo-in for the succession. Mujuru, his main enemy within the party, was gone; his promotion to the vice-presidency gave him Mugabe’s seal of approval, and he retained full control over the security services.

But how his star has fallen since then. The Crocodile, as he is known, paid the price for becoming too powerful, and has slowly been frozen out of decision-making processes. This culminated on Thursday with reports that Mnangagwa was barred from the ruling party’s Politburo meeting. If Mnangagwa is going to be the next president of Zimbabwe, he’ll probably have to do it from outside the Zanu-PF tent, which makes the task considerably more difficult.

Joice Mujuru is all too familiar with the difficulties of life outside the Zanu-PF bubble. She was pushed out of the party in 2014, and her new party is struggling to gain traction. Although still a prominent figure, her immediate route to ultimate power is not obvious: she must now compete with more established opposition parties, like Morgan Tsvangirai’s Movement for Democratic Change, for the non-Zanu support. If there is some kind of transitional arrangement, expect her to play a significant– albeit not the most major – role.

With a Facebook video, Pastor Evan Mawarire started what is perhaps the most subversive public opposition campaign in Zimbabwe’s history. But he is an accidental leader, and maintains that he doesn’t hold presidential ambitions. But should #ThisFlag gather momentum – enough momentum to effect real change – he will, as the face of the movement, be expected to guide Zimbabwe through the change whether he likes it or not.

As excited as activists are about #ThisFlag, a people power revolution still seems like a remote possibility. More likely, #ThisFlag will serve as a catalyst for Zimbabwe’s more traditional power brokers to make their move.

Despite being recently diagnosed with cancer, Morgan Tsvangirai remains firmly in the political fray, and firmly in charge of his party. The opposition leader is probably the only Zimbabwean political figure who can come close to matching Mugabe’s charisma and popularity.

Tsvangirai’s Movement for Democratic Change is looking to ride on the coat-tails of the current political unrest, and are pushing hard for the international community to help impose some kind of interim transitional authority run by technocrats, ahead of a new election within a year. This would, they hope, set up Tsvangirai nicely for a tilt at the presidency (remembering, of course, that he has won an election before).

Although very much a political appointee, Constantine Chiwenga nonetheless commands the soldiers, and the soldiers haven’t been paid for several weeks. Chiwenga could shoulder the blame for this, or he could harness the resentment in the armed forces to further his own thinly-veiled desire for the top job. If there is to be a military coup, Chiwenga will probably be leading it. He might struggle to convince army chief Philip Sibanda to co-operate, however. Sibanda is thought to be a military man through and through, and is unlikely to support a brazen attempt by an individual to seize power. But if Sibanda could be persuaded that a military solution is in the national interest, he might play along.

Last month, an influential church leader made an unusual prophecy, predicting that the next leader of Zimbabwe would come from the diaspora. Although there is plenty of speculation about who this could be, much of it has centred on the person of Strive Masiyiwa. The London-based businessman is worth hundreds of millions of dollars, making him Zimbabwe’s richest man. Masiyiwa could be a good choice to lead a transitional administration: as a money man with international links, he might be able to alleviate the country’s economic crisis.