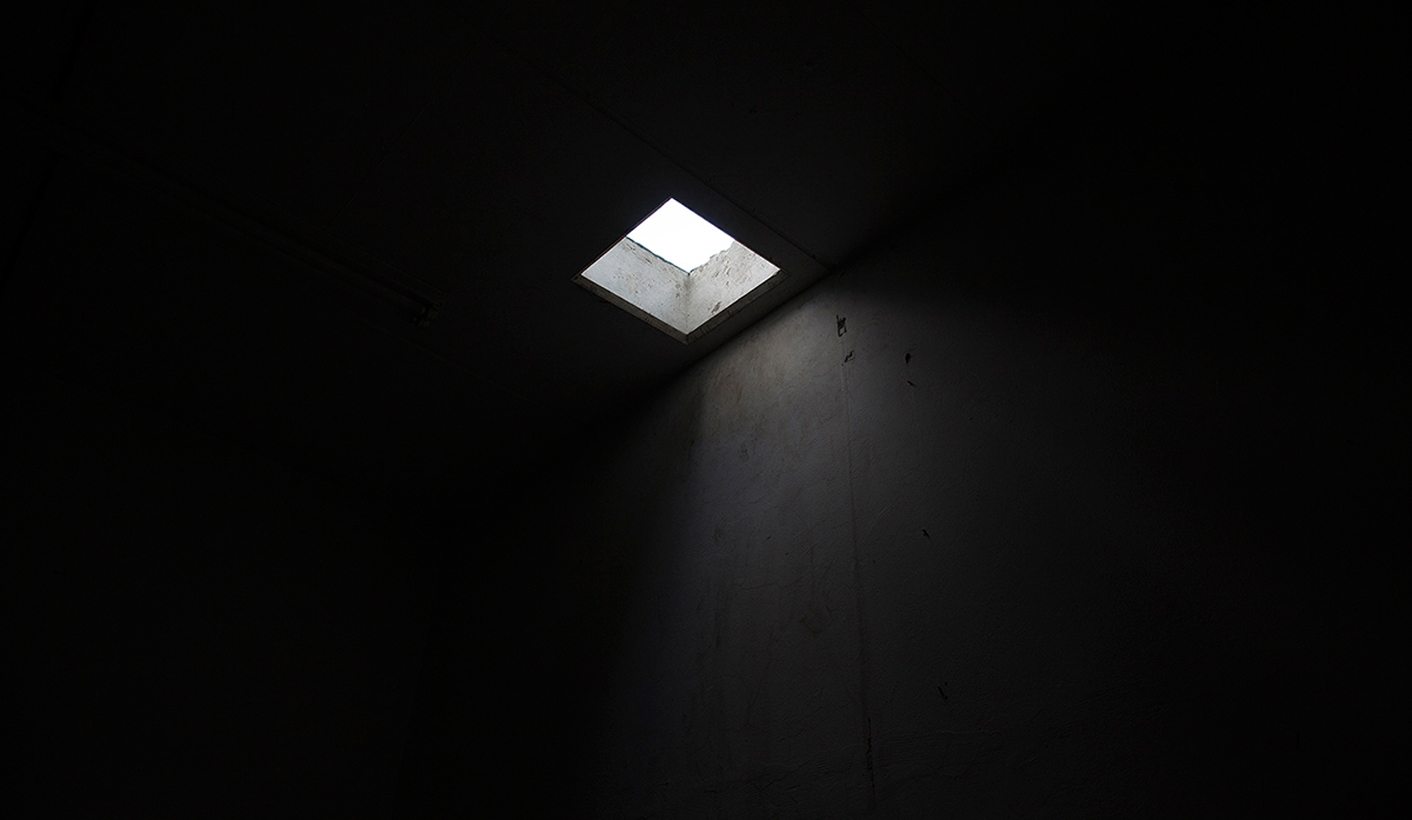 Artist Vincent Bezuidenhout’s latest exhibition, Fail Deadly, examines the country’s clandestine nuclear weapons programme in the 1970s and ‘80s. But, more important, it asks who is constructing our history – both then and now. By MARELISE VAN DER MERWE.

In 1993, then president FW de Klerk admitted that South Africa had built six nuclear weapons and was working on its seventh when it opted to dismantle its arsenal. The programme, De Klerk explained, had been under way since 1974, arguably signalling an increasingly paranoid and isolated government, but also – according to De Klerk – a response to a perceived Soviet threat, particularly during the Cold War. In 1989, after De Klerk took office, the weapons were destroyed, the blueprints shredded.

Cynics speculated at the time that the dying apartheid government may not have dismantled the weapons for entirely altruistic reasons. Today, South Africa remains the only country to have voluntarily destroyed a previously existing nuclear arsenal and subsequently joined the Treaty on the Non-Proliferation of Nuclear Weapons, a change of heart widely praised at the time. The country has also allowed international inspections of its former nuclear weapons programme. Still, public knowledge remains scant.

For one South African artist, the subject is far from closed. Vincent Bezuidenhout has a new exhibition at the Goethe-Institut in Johannesburg, entitled Fail Deadly – a term in nuclear military strategy neatly coined to contrast failsafe. The implication is clear: aggressors are discouraged from striking first on the understanding that response will be immediate and lethal. But painting a coherent picture wasn’t easy: details are sketchy, the truth difficult to tease out. So much of the information Bezuidenhout had to work with was blacked out that one entire work was built on a series of redacted pages. Delete.

But who, exactly, deletes uncomfortable chapters of our history? The way Bezuidenhout explains it, the exhibition is a web of photojournalism, image appropriation, landscape photography and archival documentation, woven together to expose the limitations of various media in telling our stories, when storytelling is so often at the mercy of power. In a country once more fighting for media freedom, the comment, perhaps, couldn’t be more timely.

DM: What made you decide on that particular subject matter for Fail Deadly?

VB: My work is concerned with the psychology of power and the validity of memory relative to history. In a previous project, Separate Amenities, I used landscape photographs to focus on previously segregated recreational landscapes as an expression of the psychology of those who implemented it.

Similarly, Fail Deadly reflects on a specific moment in South African history, considering the psychology of power use by the architects of apartheid. Like petty apartheid employed separate beaches, swimming pools and benches as a way of manufacturing a sense of “the other”, the apartheid government used a clandestine weapons programme to create fear in their perceived enemies.

DM: Tell us about the exhibition in more detail.

Fail Deadly incorporates various strategies I implemented during the research and making of this work: photojournalism, image appropriation, landscape photography and archival documentation, yet I critically reflect on the limitations of these approaches in artistic practice.

The two elements which I feel combine all this into a cohesive whole are the redacted documents I initially obtained for research, and the Black Landscape series – the result of my frustration with the lack of information, both within our constructed history, and in the landscape.

DM: What did you – or didn’t you – love about this exhibition?

One piece I love is a sculpture I made in collaboration with artist Chad Rossouw, entitled She Watches Over. It is a scale replica of the Vela satellite, which in 1979 detected a nuclear anomaly close to Marion and Prince Edward islands. Subsequent investigations came to contradictory conclusions, but a prime suspect was a joint South African-Israeli nuclear test. In this work, we wanted to examine the complex interaction between secrecy, government and fear, which intersected with South Africa’s own history of aggressive nationalism and modernist aspirations.

The very muteness of this work suggests a limit to what representation can reveal. At a time when various countries are again ramping up their nuclear weapon programmes, and with suggestions that we have already entered a second Cold War, I think it pertinent to reflect on this period of South African history.

DM: Growing up, what were your primary influences as a person and artist?

As a white Afrikaans artist growing up in the death throes of apartheid, my past shaped my current practice in reflecting on my identity, relative to the history of power that still shapes our reality today. I grew up in Bloemfontein, in a conservative Afrikaans community, and it was only after leaving this environment that I was able to start interrogating my own and our collective past. As a young photographer, with a certain naiveté about concepts such as truth, I soon started to examine the issues of memory, history and power – with their inherent ability to obfuscate. Over time, my practice has evolved from a formal photographic one to a more multidisciplinary approach.

DM: Tell us a bit more about your thought process in constructing Fail Deadly. You’ve combined a number of different elements – can you take us through how it became what it is?

Initially aiming to create photographs of a secret weapons programme which no longer exists, the project progressed into a personal investigation into questions of censorship, including the limitations of what representation can reveal. I connected different works in this exhibition to elements of redaction and censorship, but most importantly to the limitations of information in being able to confront history.

While on residency at the School of Visual Arts in New York, I staged an intervention at the Picture Collection of the Mid-Manhattan Library. I took a set of declassified, but completely redacted documents from South Africa’s nuclear weapons programme, and anonymously inserted them into the Picture Collection under seemingly disparate folders: Radiation, Security, Detectives, Colonialism, South Africa – Transvaal, Cowboys, etc. The documentation of this intervention forms part of my current exhibition.

The Black Landscape series is a direct result of looking at the limitations of traditional photographic works and linking this to the redacted documents. I developed inkjet prints consisting of two layers, the initial print being a landscape shot near the locations of the nuclear facilities, which was then printed over in solid black. The two layers of ink created a ghost image.

DM: You mention reflecting on your own identity through the piece too.

The failure of all of us to adequately confront our past is perhaps one of the major themes running through contemporary South African art. It is almost impossible not make political art in such an environment where so much is unresolved.

As distanced and objective as I may want to be, I feel the work still speaks to a personal and collective conflict between past and present. The result has been the conflation of incompatible narratives – my conflicted personal history, as well as our collective one, through using omission and cover-ups to confront incomplete narratives; manifestations of past powers.

DM: I’m intrigued by your saying you’ve exploited the aesthetics of research, rather than its results, in exploring the limitations of documentation or narrative. Can you explain that a little?

Confronted with very little information and evidence elements photography thrives on, I exploited the aesthetic nature of the documents I obtained, which contained black page after black page of redacted information. This led to the work entitled Pelindaba (Zulu for The discussion is finished and also the name of the nuclear facility where these weapons were made). Pelindaba comprises over 900 pages of declassified documents from various sources including the NSA, CIA and internal government communications. I present all these documents on a plinth in the gallery for the viewer to page though.

The documents revealing nothing – this became the basis for the rest of the work. I started to construct a narrative that allowed me to expand on and recontextualise the facts and theories surrounding these events, examining these elements of history and power.

DM: Secrecy is a touchy subject in South Africa, and it’s rearing its head again now. Is this theme of selective revelation something you’ll explore again?

In working on this project I encountered resistance in various guises, including thinly veiled threats about exploring a part of history still relatively unknown, and which encapsulates certain diplomatic sensitivities. I do feel, however, that the lack of disclosure and failure of justice being served regarding this clandestine programme speaks to a constructed narrative that permeates all of South African history. Fail Deadly highlights this failure and [questions] the validity of official information as the sole creator of history.

DM: How do you envision the role or purpose of the country’s artists in the future?

In my opinion, if art is not political it is not art. With increasing inequality and censorship both here and abroad, it is more important than ever for cultural institutions, like the Goethe-Institut, to be brave through strengthening their support for arts, which in many ways have become the last place to speak the truth.

In a previous project entitled Banned, I appropriated footage from movies censored during apartheid. This project was censored in both Uganda and Zimbabwe for including footage of a homosexual nature. Regardless of both countries’ controversial laws regarding homosexuality, the paradox of censoring footage originally banned during apartheid reminds one that when there is a transition of power within a state, the mechanisms of the previous regime are also transferred. We must be vigilant of the rewriting of history, including how it is created today.

DM: What’s the most exciting or promising aspect of being an artist, and being one now?

I think it is harder to be an artist than ever before, in terms of the justification of making art. Perhaps at a time of spineless apathy and ignorance it is also the most important time to be making art.

DM: What’s next for you?

I am always working on several projects simultaneously, with time and funding playing a large role in which come to fruition first. This includes a few video projects, one of which follows on from Fail Deadly. I am also working on a long-term photographic project in the holiday town Hartenbos. DM

Bezuidenhout will hold an artist walkabout on 24 July 2016 at the Goethe on Main gallery. This interview was edited for brevity.