South Sudan Photo Essay: ‘I can’t see but God is in my eyes’ 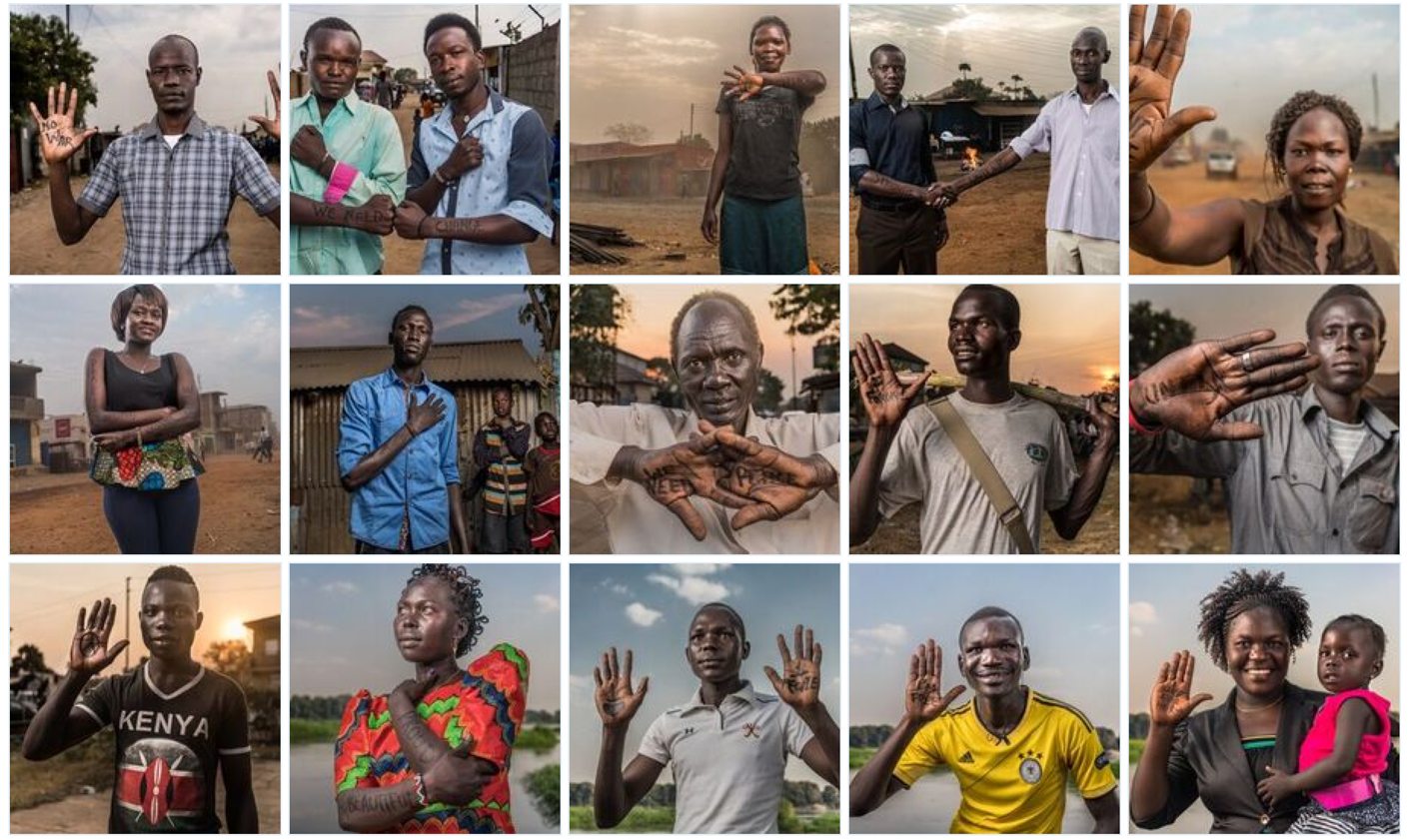 On the eve of South Sudan's independence, photographer ROBERT FOGARTY captured the citizens of the world's newest country, in their own words.

In collaboration with Oxfam International, a series of photographs was commissioned from American photographer Robert Fogarty, who made his name highlighting the plight of those left behind in New Orleans after Hurricane Katrina. He has also worked with Syrian refugees and Boston Marathon survivors.

The photos depict ordinary men, women and children of South Sudan, in a refugee camp and on the streets of the country’s capital, Juba. Using Fogarty’s unique approach, their own words are written on their hands and arms for the wider world to see. Their words speak of the challenges in their lives and the desperate need for peace and calm. They call on the world to help sustain the fragile recently negotiated peace, so that they can rediscover their hope for the future without fear of further violence.

I Am All Alone: Betty, now in Mangaten IDP camp, Juba, lost her husband in the war. Without child, she is completely alone and finds it extremely painful to stay in the camp.

I Can’t See But God Is In My Eyes: Caroline, an elderly woman from Peri, did not lose anyone from her family. She is blind and feels lost in the Mangaten camp for displaced people Juba’s . She says that for her what is important is having God in her life.

Loss is Painful: Amoot, now at Mangaten camp in Juba, lost her brother in the conflict, and does not know the whereabouts of his children. She says that she’s really tired.

My Children Will Study: Bling fled Malakal to Mangaten camp in Juba after her husband died. Her favourite memory of him was when he supported her and her children’s education. She hopes that her children can get a proper education and become “good people” like her husband.

Peace Is Important So People Don’t Cry: Awel, from Banel, has been separated from her sons in the conflict. She has also lost her uncle’s daughter whom she considered as her own child. She hopes for peace so that people can stop “feeling lost”.

South Sudan Is Not Good: James, from Western Bahr El Ghazal, had been child soldier in his youth. He stopped when he realized that what he was doing was wrong and unhealthy. He simply wants South Sudan to get back to how it was before the conflict.

Why Always Bullets: Lombe lost several classmates and football-mates in the conflict. He hopes that South Sudan will stop resorting to bullets to solve problems.

Care for the Youth: Moses says that he lives in a state of constant insecurity day-to-day. He is particularly concerned about the bad economic situation in his country, worried that instability in South Sudan is “doomed to repeat itself”. He hopes that South Sudan’s youth will forget about this “senseless war”.

We Cry for Peace: Nunu, now in Juba, has been separated from her family. She doesn’t let adversity bring her down, saying that she is always filled with happiness. She hopes for peace and unity in her country.

Peace Today, Not Tomorrow: Titus, who works for Support the Children Organization (SUTCO), calls for a timely implementation of the peace agreement. He lost his father in the conflict while studying in Uganda and has now returned to South Sudan to help his family and community.

No War, Yes Peace: Thomas, a cartoonist working with Juba Monitor, has been separated from his mother for over two years since the start of the conflict. He also lost his childhood friend, Simon, whom he would regularly spend time with watching cartoons. He hopes for peace and stability in the country: “we have to open a reconciliation between us.”

We Need Change: South Sudanese people share their messages of peace on the 5th anniversary of their country’s independence.

We Need Peace: South Sudanese people share their messages of peace on the 5th anniversary of their country’s independence.

I Want Peace: South Sudanese people share their messages of peace on the 5th anniversary of their country’s independence.

Reconciliation: South Sudanese people share their messages of peace on the 5th anniversary of their country’s independence.

One Heart, One People: Juba

I Live For Her: Juba

Peace: Director of MAYA group, a youth organisation in South Sudan committed to empowering and strengthening the capacity of local communities through creative arts.

With Peace We All Win: Mangaten IDP Camp

I Am Hopeful: Mangaten IDP Camp

I Will Make It: Mangaten IDP Camp