ICG: From Conflict to Co-operation? Sudan, South Sudan and Uganda 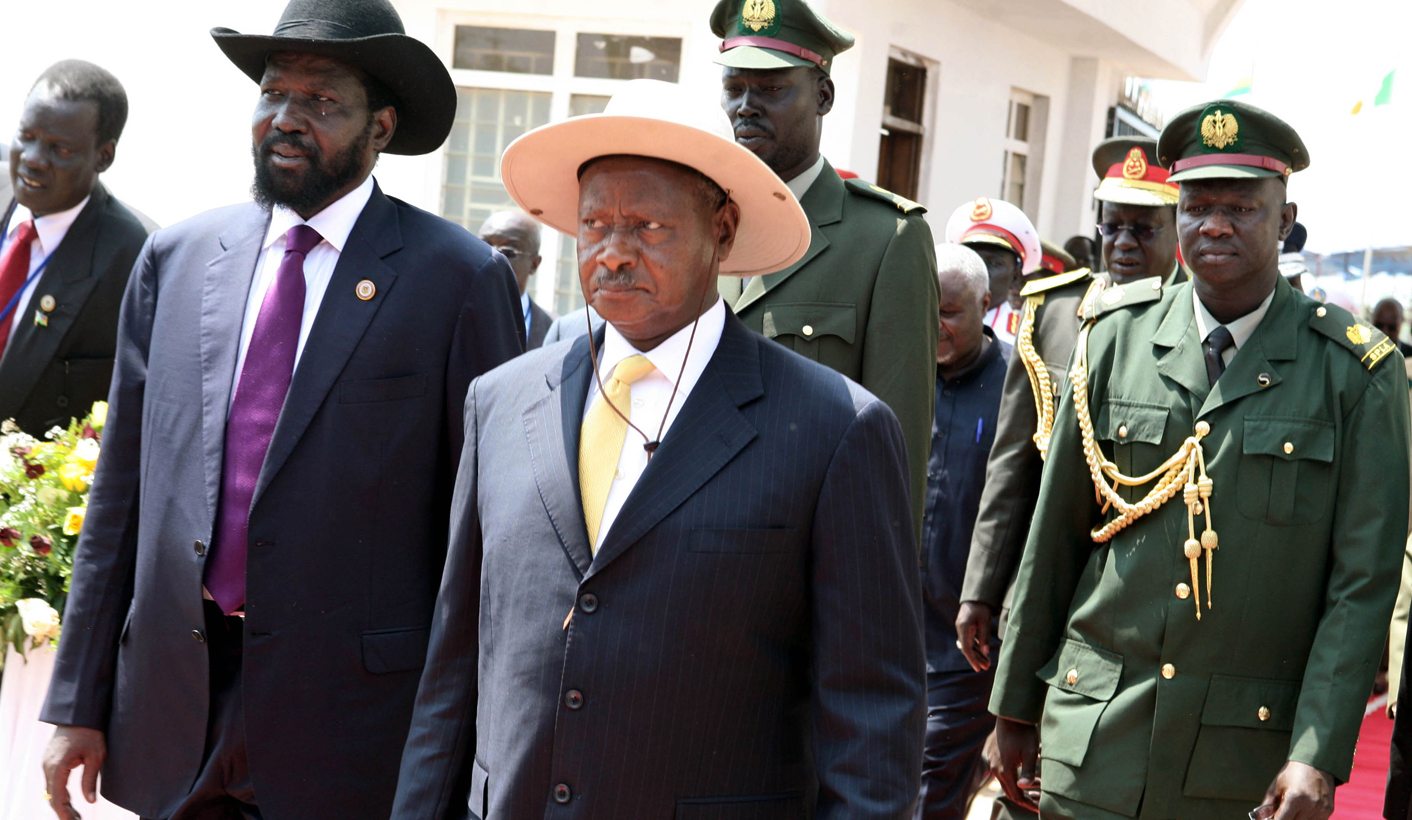 When South Sudanese leaders travelled to Khartoum in early June, pragmatically declaring their intent to “normalise relations” with their northern neighbours, it was a tentative sign of hope for what has been one of the Horn of Africa’s worst war zones. By CASIE COPELAND and MAGNUS TAYLOR for International Crisis Group.

Uganda, historically a staunch ally of South Sudan, is now seeking more constructive relations with Sudan too. The current processes – formal and informal, public and private – tackle a wider set of challenges that have historically inhibited good relations between the three countries. A new understanding between the three could bring a welcome change to the Horn’s complex balance of alliances and animosities.

The new overtures are driven by South Sudan’s economic crisis, coupled with Uganda’s and Sudan’s desire to protect their interests in the country. South Sudan has large oil reserves, which are exported through Sudan, but its production fell sharply with the eruption of civil war in December 2013. With the civil war’s end, Juba now wants to renegotiate the terms of its 2012 oil transfer agreement that mandates large payments to Sudan, arguing that a new deal needs to reflect the global downturn in prices and its own post-civil war financial straits. While Juba wants a new arrangement with Sudan, such a deal would come with strings attached. Donors’ reluctance to bail out South Sudan financially, unless Juba adopts stringent transparency and accountability measures, makes other options seem worse than a wider deal with Sudan.

Sudan now wants to co-operate too. Its economy, though more resilient, still suffers from the 2011 division of the country, the loss of shared oil revenue, and, like South Sudan, obstacles to full cross-border trade. But in return Khartoum wants South Sudan to help end wars in Darfur and the Two Areas, South Kordofan and Blue Nile, and stop its alleged support for Sudanese rebel groups.

Reaching agreement could be tough but conditions are more favourable than at any time since South Sudan’s secession five years ago. If both sides continue to work seriously on their bilateral relations, chances will rise of resolving other interlinked conflicts, notably the conflict in the Two Areas. A Khartoum-Juba deal would likely limit the operational space of Sudanese rebels – especially the Sudan Peoples Liberation Movement-North (SPLM-N) – and lead to new border security arrangements.

The territory of southern Sudan (South Sudan since 2011) has long been a site of mutual interventions and proxy conflict between Khartoum and Kampala. During the 1990s, Uganda was suspicious of Islamist Sudan’s apparent desire to expand Arab and Islamic influence southwards. To counter the perceived Islamist threat, Uganda backed the Southern Peoples Liberation Army (SPLA) in the Sudanese civil war. Khartoum supported Ugandan rebel groups, the Lord’s Resistance Army (LRA) and Allied Democratic Forces (ADF), among others.

South Sudan’s 2011 independence directed its neighbours’ rivalry towards competition for influence over the new state. Despite this, Sudan and Uganda have shared interests in common, including unhindered South Sudanese oil production and stability under President Salva Kiir.

Sudan needs regular “transit fees” – a per barrel payment for use of the northern export pipeline – to buttress its fragile post-secession economy. Kampala’s concerns have shifted substantially from security to economic. It wants a prosperous South Sudan to trade with, particularly in the Equatoria region bordering Uganda. Kampala also believes it should have influence over major strategic decisions made in Juba; its historical support for the SPLA is reflected in a longstanding defence co-operation agreement, which includes allowing cross-border interventions by the Ugandan army.

From civil war to regional peace?

The potential for regional contagion following the outbreak of South Sudan’s civil war demanded mediation from the Horn of Africa’s regional security organisation, the Intergovernmental Authority on Development (IGAD). Though it failed to stop the war from escalating within South Sudan in its early months, IGAD’s largely unheralded success was to pull Uganda and Sudan (both member states) back from more aggressive posturing and toward a resolution of the war that both could support.

Critical to the eventual Agreement on the Resolution of the Conflict in the Republic of South Sudan (ARCSS) in August 2015 were key provisions negotiated at the IGAD Head of State-level involving Sudanese President Omar al-Bashir and Ugandan President Yoweri Museveni. These included the withdrawal of Ugandan forces – completed in October 2015 – and the “disarmament, demobilisation and repatriation” of any Sudanese rebel forces present in South Sudan, which include the Sudan People’s Liberation Movement/Army – North (SPLM/A-N) and the Justice and Equality Movement (JEM) – which Khartoum alleges are materially supported by Juba. The long-running African Union mediation to end the armed conflicts in Sudan has also engaged both these groups.

As the 2015 South Sudan peace agreement recognises, peace in the Sudans is dependent on all three countries’ approach to regional relations. Improved relations between Uganda and Sudan have been reinforced by regional heads of state summits during South Sudan’s peace process, joint efforts to resolve South Sudan’s civil war, presidential and vice presidential visits, mutual disparagement of the International Criminal Court and plans to create a Joint Permanent Commission on bilateral affairs.

Despite political will, the inherent complexities of the disputed Sudan-South Sudan border and relationships on both sides make this a fraught process with no guarantee of success. Scepticism and a degree of distrust remain on all sides. Yet negotiators are drawing from past agreements considered a success – notably the Chad-Sudan 2010 agreement, which precipitated the weakening of both Chadian and Darfur rebel groups; and the arrangement between Khartoum and Juba that led to the South Sudan Liberation Army (SSLA) disbanding and its members returning to the South in 2013. Elements of the former SSLA control part of the border as part of the Juba-Khartoum deal, which served both their interests during South Sudan’s civil war.

If Sudan and South Sudan cannot strike a new deal then the broader regional configuration may well revert to its previous state of instability, mutual suspicion and proxy conflict. But the emergence of a new and pragmatic grouping could shift the regional balance of power in the Horn of Africa with significant advantages to the regimes in Kampala, Juba and Khartoum, and help end one of Africa’s most enduring conflicts. DM

Casie Copeland is Senior South Sudan Analyst and Magnus Taylor is Horn of Africa Analyst at the International Crisis Group.