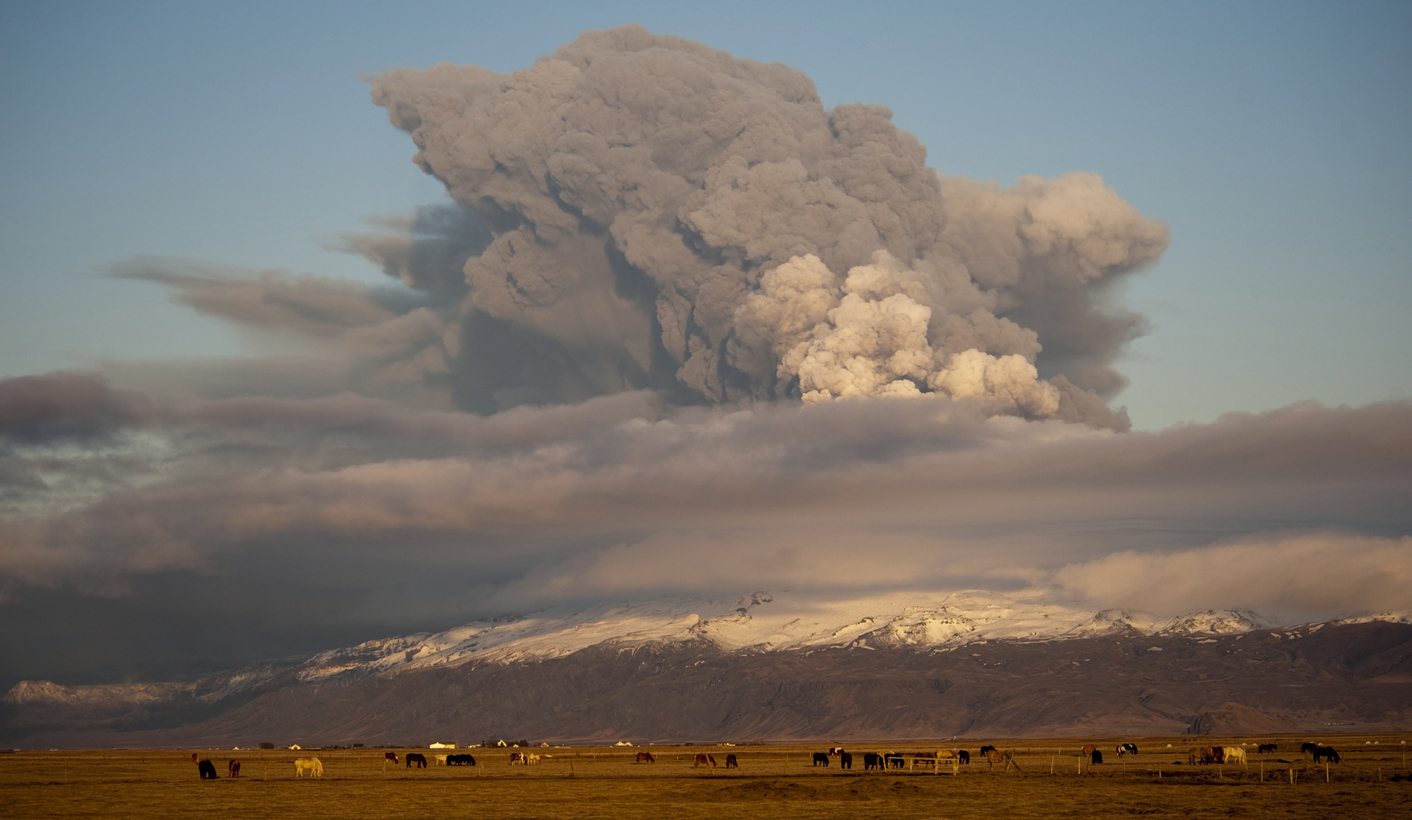 ‘CarbFix’ may sound like Tim Noakes’ worst nightmare, but in fact it’s a new means of storing excess carbon emissions to mitigate the effects of climate change. Is it viable? By MARELISE VAN DER MERWE.

Last week, scientists working in Iceland published the results of almost five years of research in the journal Science: a new way to trap carbon dioxide emissions deep underground by turning it into solid rock.

In short, injecting the harmful emissions into volcanic rock – of which Iceland has no shortage – triggers a chemical reaction that forms a new carbonate compound, a solid mineral that is potentially far less harmful to the environment.

The process, known as mineralisation, has previously not been considered viable because it was believed to be too slow. In nature, it takes hundreds of years to complete. But according to the new study, it could take just two years commercially.

The study, led by Columbia University, the University of Iceland, the University of Toulouse, and Reykjavik Energy, found that between 95% and 98% of the injected CO2 was mineralised within less than two years, which lead author Dr Juerg Matter described as “amazingly fast”.

A further advantage, say the researchers, is that the process involves injecting the carbon into basalt, a volcanic rock commonly found in many parts of the world, including South Africa. It is, in fact, one of the most common types of rock in the world – its largest deposits are found on the ocean floor, but on land it’s common in hotspot islands, around volcanic arcs, and along continental flood basalts such as those in India, Canada, Brazil and, of course, the Karoo flood basalt region in South Africa.

And the best news, they add, is that carbonate minerals are stable, which should avoid leakage.

The idea of getting rid of carbon emissions while viable alternative energy sources are explored is not new. A number of efforts at carbon capture and storage (CCS) are already under way internationally. Carbon dioxide can be injected into disposal areas underground, but this has its drawbacks. The idea, in short, is to mitigate some of the potential effects of fossil fuels on global warming and to reduce ocean acidification, by capturing waste carbon dioxide that is released in large amounts – usually from industrial sources such as power plants. The problem is that attempting to seal carbon in underground voids such as abandoned oil or gas reservoirs or even briny water bodies leaves them vulnerable to harmful leakage or contamination. So the alternative of mineralisation – an attempt to dispose of carbon dioxide permanently – has been explored instead.

“Carbonate minerals do not leak out of the ground, thus our newly developed method results in permanent and environmentally friendly storage of CO2 emissions,” explained Matter. “On the other hand, basalt is one of the most common rock types on Earth, potentially providing one of the largest CO2 storage capacity.”

The Iceland project, known as CarbFix, has been in progress since October 2011. Media, scientists and the public alike have welcomed it with excitement. Geochemist Roger Aines (unaffiliated) called the discovery “really exciting”; geologist Sally Benson, also unaffiliated, said it was a “great step forward”. Hydrologist and study co-author Martin Stute said the results “blew us away”. The researchers were expecting to struggle for at least two decades before seeing answers, he said.

But the key question remains: Is it viable? The initial answer appears to be a tentative yes, and study co-author Sigurdur Gislason says geothermal companies around the world have shown interest in the technology. And they’re not the only research team moving in this direction. A similar, unaffiliated study is exploring pumping emissions into peridotite, which may react even more rapidly with carbon dioxide.

Still, there are hurdles that need to be cleared. One of them has already been dealt with: Sandstone, the previous test material of choice, yields little reaction with carbon dioxide. Basalt, although it yielded better reactions, to date appeared to be effective but on a timescale that was far too slow, so the speed of the new process is its major selling point. Another is cost: the basalt storage technique costs about $30 per ton of carbon dioxide, considerably lower than the average of $130 per ton for other, similar methods of carbon dioxide storage.

As for how it was tested, the team’s pilot project, which was managed together with Reykjavik Energy, kicked off in March 2012. At the Hellisheidi geothermal power plant – the largest in the world – they injected 175 tons of pure carbon dioxide into an injection well, followed, some months later, by 73 tons of a carbon dioxide/hydrogen sulphide mix. The latter step was experimental – they wanted to see if it was necessary to separate the carbon dioxide from other gases or whether the process would work without this costly and time-consuming step.

Carbon dioxide was separated from steam produced by the plant and pumped down a pipe within a pipe filled with water from a nearby lake. Several hundred feet underground, the carbon dioxide was released into the water at pressure so high that it dissolved rather than bubbling to the surface. That mixture, which became highly acidic, was injected into a layer of basalt, which initiated a chemical reaction that eventually resulted in carbonate rocks. The two key ingredients, say the researchers, are the basalt and the water. Upon testing the water, later, the researchers found that the carbon dioxide had been left behind in the rock.

A crucial issue is the amount of water needed. About 25 tons of water are required for every ton of carbon dioxide needing to be stored, which means that – given the estimated carbon emissions per country – the technique may require more water than is readily available. In South Africa, for example, the estimated carbon emissions for 2013 were 392,000 tonnes or 7.4 per capita. Multiplied by 25, that is a worrying amount of water needed, especially considering the demand-supply gap reported in May 2016. This hurdle may prove to be temporary, however; researchers are investigating the possibility of using seawater.

A further concern is that the technique might not necessarily be possible to replicate very easily. Christopher Rochelle, a CSS expert who was not affiliated with the study, told the BBC: “Here, they injected into reactive rocks and the minerals precipitated relatively quickly and are then unable to migrate anywhere. That’s great, but the rocks under Iceland are different to those under the North Sea, for example. So the approach that is taken is going to have to vary depending on where you are. We are going to need a portfolio of techniques.”

Charlotte Sullivan, a researcher of carbon dioxide storage in basalt at the Pacific Northwest National Laboratory, told Ars Technica that slower results might be expected elsewhere, as unique conditions in Iceland might not be replicated in other regions. The researchers have also pointed out that the technique may take longer at fossil fuel plants and may cost more than indicated in the pilot study.

The most significant challenge of all may come from Mother Nature herself: according to the initial announcement from the research team, a separate study out this May identified subterranean microbes that seem to be capable of feeding off carbonate minerals and using them to release methane. In the process of storing carbon dioxide, researchers may end up emitting a greenhouse gas even more potent.

Nonetheless, operators are forging ahead in Iceland. In 2014, Reykjavik Energy began using the technique to pump carbon dioxide underground at a rate of 5,000 tonnes per annum and reportedly plan to double that this year.

Meanwhile, said a statement by Columbia University, other researchers are exploring ways to use up carbon emissions by power plants. Such projects include one supported by Exxon to build fuel cells that convert carbon dioxide to energy, and another initiative by Ford that aims to convert emissions to foams that can be used in vehicle interiors. DM

Photo: A file picture dated 17 April 2010 shows smoke rising as an eruption of the volcano near Eyjafjallajoekull glacier occured, some 120 km away from Reykjavik, Iceland. According to the Icelandic Meteorological Office, Iceland finds itself on high alert over its Bardarbunga volcano. EPA/S. OLAFS