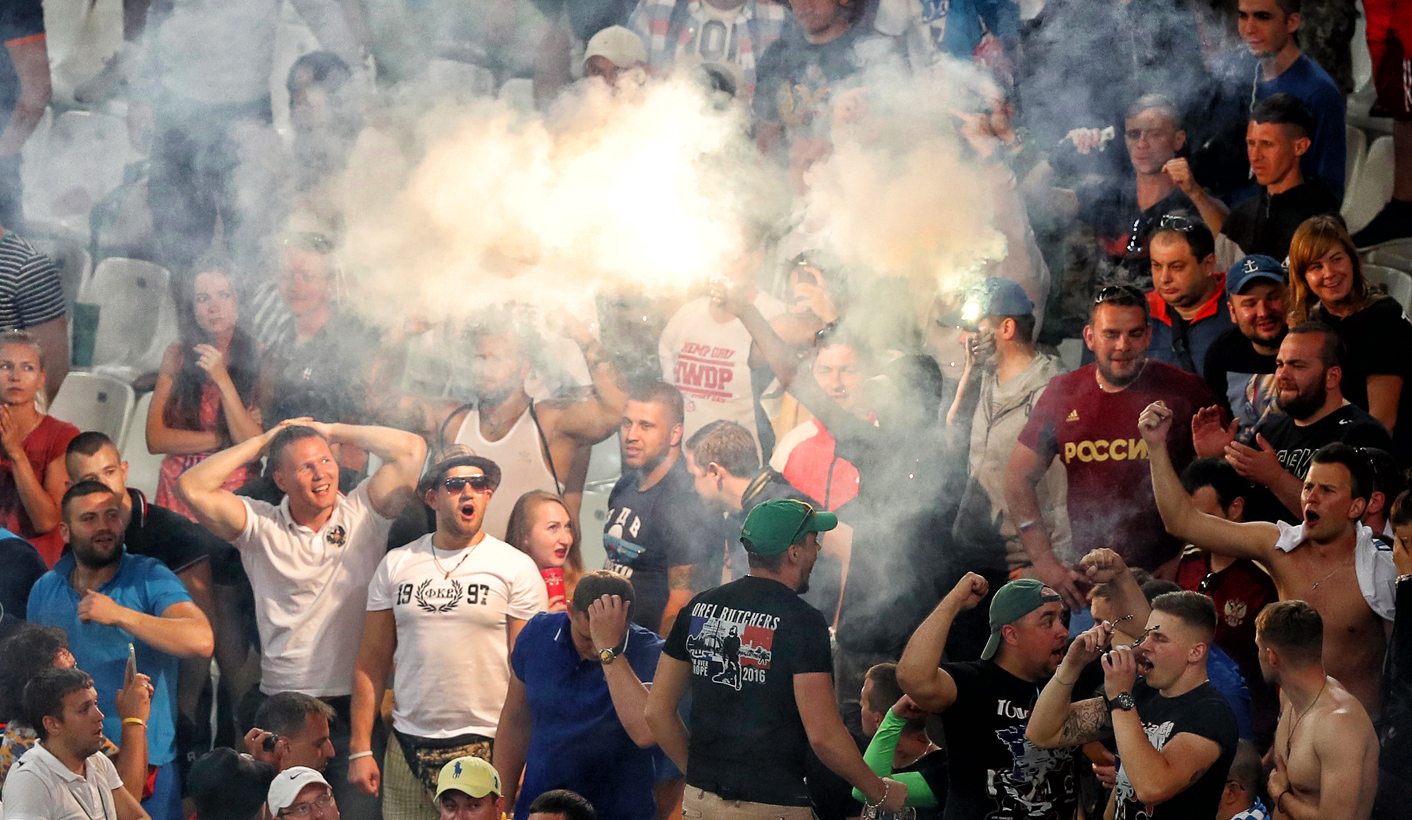 It’s turned into a case of he-said, she-said as violent clashes between England and Russian supporters have marred the Euro Championships in France. Russia has been fined and handed a “suspended disqualification” while England escaped any punishment. The situation requires strong leadership from both UEFA and FIFA as both governing bodies are responsible for rooting out the rise of hooliganism, often fuelled by right-wing supporters. By ANTOINETTE MULLER.

The response of The Union of European Football Associations (UEFA) and The Fédération Internationale de Football Association (FIFA) could very well become critical in defining Gianni Infantino’s era. Last week and over the weekend, English and Russian supporters clashed both in the streets of Marseille and after the full-time whistle of the 1-1 draw between the two sides.

French police used tear gas and water cannon in an attempt to control the crowds, but the unrest left several people injured with at least one in critical condition. Despite trouble from both sets of fans – with England fans causing much of their ruckus outside the stadium – UEFA opted only to act against Russia.

On Tuesday Russia was handed suspended Euro 2016 disqualification, which will become a disqualification if any more trouble ensues, and fined €150,000. Russian striker Artem Dzyuba as well as coach Leonid Slutsky both responded by criticising English fans and the media saying it was “politically motivated” in an attempt to strip Russia of qualification of the 2018 World Cup.

“We do not know what happened on the streets, of course, but when the Russian national anthem was played and all the people were shouting, the English supporters, this was something not ethical at all. And all the gestures we received when we were on our bus on the way to the stadium from all these English supporters,” Slutsky said.

UEFA simply registered “disgust” at the incidents on the streets leading up to the match. So far, six England fans have been charged. French authorities had also “begun the process of deporting Russian fans from the country” after a Russian supporters’ bus was stopped in the town of Mandelieu near Cannes, on their way to Lille.

Both sets of fans have indeed behaved despicably and UEFA’s response to the English fans has been modest at best. However, these incidents – and any further such incidents – do raise troubling questions over the 2018 World Cup and even more serious questions over whether Europe and indeed the world’s football governing bodies are in tune with reality.

Most troubling is that Alexander Shprygin, a right-wing activist who was previously photographed giving a Nazi salute, is travelling with the official Russian FA delegation (with accreditation). Equally troubling is that Shprygin serves on the local organising committee for the 2018 World Cup which is due to be held in Russia.

UEFA cannot claim this to be an oversight. Shprygin was part of a Russian delegation that toured France’s host cities in March and is well known in football circles.

Shprygin is head of the Russian state-backed All-Russian Supporters’ Union, known as the VOB in Russian. Last year, Fare claimed that he had been repeatedly photographed with symbols and gestures showing support for far-right and neo-Nazi causes.

The Russian has, however, denied that he holds these beliefs and said in an interview with AP last year that while he does operate social media pages that post pictures of far-right and nationalist symbols, it is done to show “how football has changed”.

He told AP in an interview last year: “I’ve got photographs from those days, not as propaganda, but the other way round: ‘Look, that’s what it was like then.’”

He also accused “some Fare staff” of doing their work “unprofessionally” and suggested that the organisation overplays “minor incidents” in an attempt to justify its existence, also claiming that neither he nor the VOB held any racist beliefs, and that Russia was being unfairly portrayed as a hotbed of discrimination in the run-up to the World Cup, insisting that displays of racism in Russia are “rare”.

However, in a report released by Fare last year, the organisation found 92 incidents of discriminatory displays and chants by Russian fans in and around stadiums in the 2014-15 season, against a total of 83 for the previous two seasons put together. It also noted Russian fans causing trouble abroad with incidents of racist banners on show by CSKA Moscow fans at a Champions League game in Rome, and Russian fans with far-right symbols at the World Cup in Brazil.

But he recently said that he wanted to “see only Slavic faces in the Russian national team” and Fare’s executive director Piara Powar said that the Russian’s presence within the official delegation raised concerns over “the apparent nexus of high-level politicians, far-right leaders and extreme nationalism”.

The situation is quite obviously delicate and strong action and leadership is needed from both UEFA and FIFA. On the one hand, UEFA cannot look to be biased to either England or Russia. Far more pertinently for both UEFA and FIFA is the rise of hooliganism, in some cases driven by right-wing supporters. Both governing bodies have to find a way to diffuse the situation and stamp it out, not just at the Euros, but also with the World Cup in sight. DM

Photo: Russian fans light flares during the UEFA EURO 2016 group B preliminary round match between England and Russia at Stade Velodrome in Marseille, France, 11 June 2016. The match ended 1-1. EPA/ALI HAIDER EDITORIAL USE ONLY