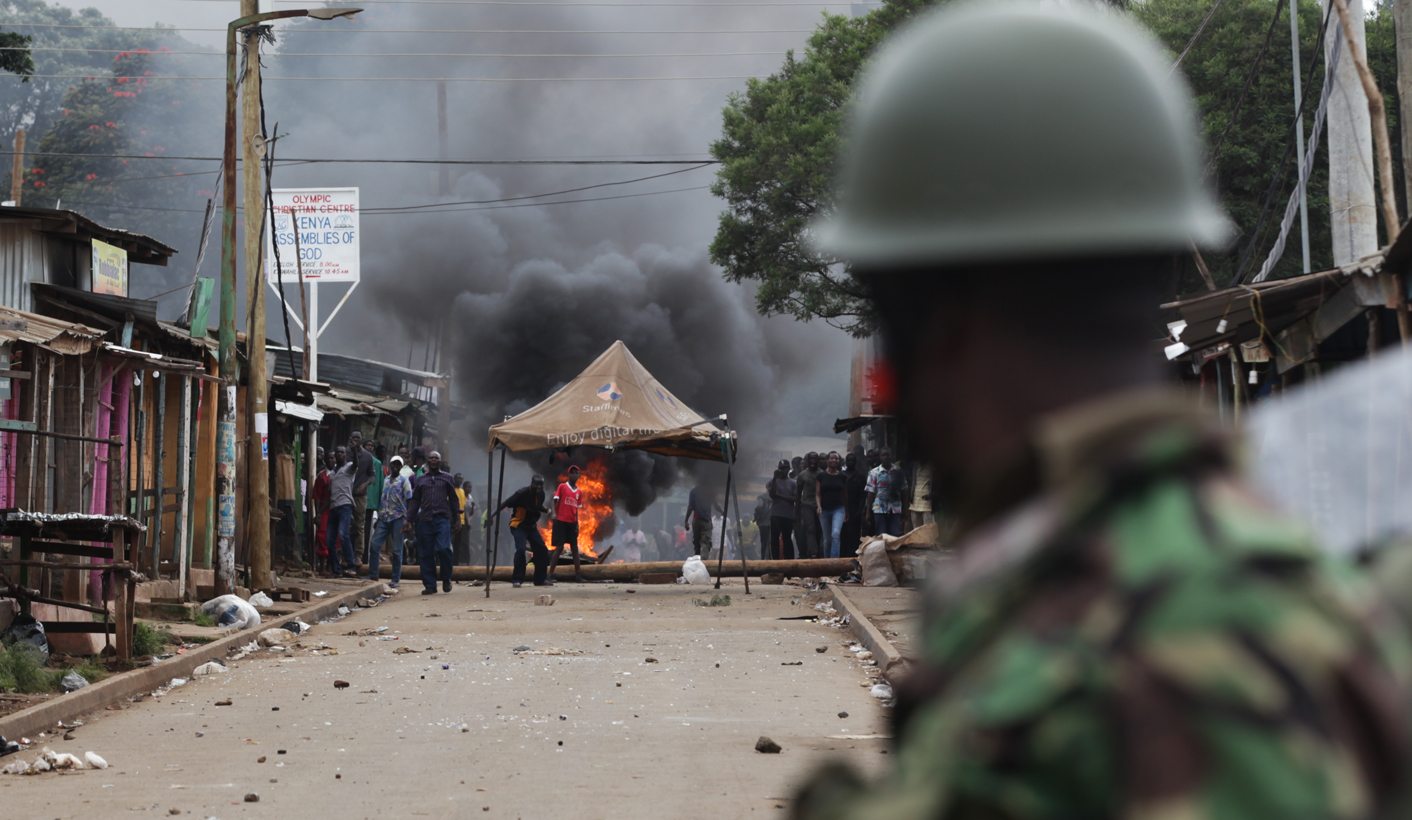 Another brutal crackdown on protests in Kenya resulted in at least three fatalities on Monday. This has been coming for several weeks, ever since the opposition launched its weekly demonstrations against the country’s electoral commission, and raises serious questions about Kenya’s ability to hold a peaceful vote next year. By NJERI KIMANI.

When Kenya’s main opposition party launched demonstrations against the country’s election commission last month, no one expected the protests to turn violent. But that’s just what has happened after a brutal police crackdown, once again raising the spectre of violence in the run-up to the 2017 vote.

On Monday, deadly street fights claimed the lives of three people: one from Kisumu, stronghold of opposition leader Raila Odinga, and another two from Siaya in western Kenya. The three previous Mondays – the designated protest day – were characterised by scenes of heavy-handed police crowd control, with tear gas and live bullets used against unarmed protesters. Several protesters reported being beaten up by police, while the Kenya National Commission on Human Rights accused the police of using “gruesome violence”.

Speaking last week, commission chair Kagwiria Mbogori said: “The commission is particularly dismayed by the gory scenes witnessed yesterday in Nairobi, Kisii and Machakos where demonstrators who had already been subdued were subjected to gruesome violence by the police resulting in serious bodily harm. The commission has already received a report that one of the victims succumbed to the injuries.”

Mbogori said the commission had begun its own investigation into the excesses by police with a view to seek accountability for the culprits and redress for the victims.

Odinga and his Coalition for Reforms and Democracy (CORD) have accused the Independent Electoral Boundaries Commission (IEBC) of corruption, and have said that the government has repeatedly refused to investigate or censor IEBC bosses. This, they say, compromises the integrity of the election before it has even been held.

Odinga argues that the government’s inaction does not mean that there is nothing to be done. “Is it to mean then that the people are helpless? Is it conceivable that the people who empowered the institutions to work for them have now to sit helplessly and watch as these institutions betray them? Could the servants have now become more important than the masters?” asked Odinga.

Odinga himself has not been spared violence, with his car sprayed with bullets last week in what his supporters are describing as an assassination attempt.

“The kind of violence displayed by the police on citizens exercising their democratic rights today is unacceptable. Kenya must remain a free society governed by respect for the Bill of Rights as enshrined in our Constitution,” said Odinga.

The government has repeatedly denied using excessive force, and blamed opposition groups for the violence. Central Nairobi police chief Paul Wanjama said his men did not use live ammunition, noting that it was difficult to immediately establish which firearm discharged bullets in the confusion of the demonstration. He promised to launch an immediate investigation into the matter.

Complicating things further are claims by residents and business owners that some “protesters” were actually looters who took advantage of the chaos to rob people and break into shops.

Francis Kago, a distribution manager at the Nation Media Group, described how he had gone for lunch at a restaurant with his friend Phillip Vesele, when he was accosted by a rowdy gang.

“About seven of the attackers descended on me, and started kicking me and throwing blows on me, trying to ransack me. It was clear that they were on a mugging mission,” said Kago.

Kago said that one of the attackers tried to strangle him with his tie, but ended up grabbing the wrong end of the tie so that the noose could not tighten around his neck. They ended up robbing him of all his money but when he started screaming to attract passersby the thieves ran away. He escaped with a knee injury and a torn jacket.

“This was not a political demonstration, neither was it a crusade for civil liberties,” said Kago.

The Independent Electoral Boundaries Commission’s chairman Issack Hassan has said his organisation has done nothing wrong, and maintains his own innocence. He also maintains that he will not step down or bow to pressure to resign. If the violence surrounding the demonstrations against him and his institution continues, he may have no choice but to reconsider. DM

Photo: Anti-riot police officers disperse protesters throwing rocks during a demonstration against Independent Electoral and Boundaries Commission (IEBC) in the Kibera slum in Nairobi, Kenya, 23 May 2016. According to local media reports, one person was killed in Kisumu, western part of the country during similar protest which were also held in Mombasa, the coast side of the country. Opposition supporters staged a protest four weeks in a row against the country’s electoral body in an attempt to push for the reforms ahead of the next year’s general elections. EPA/DANIEL IRUNGU