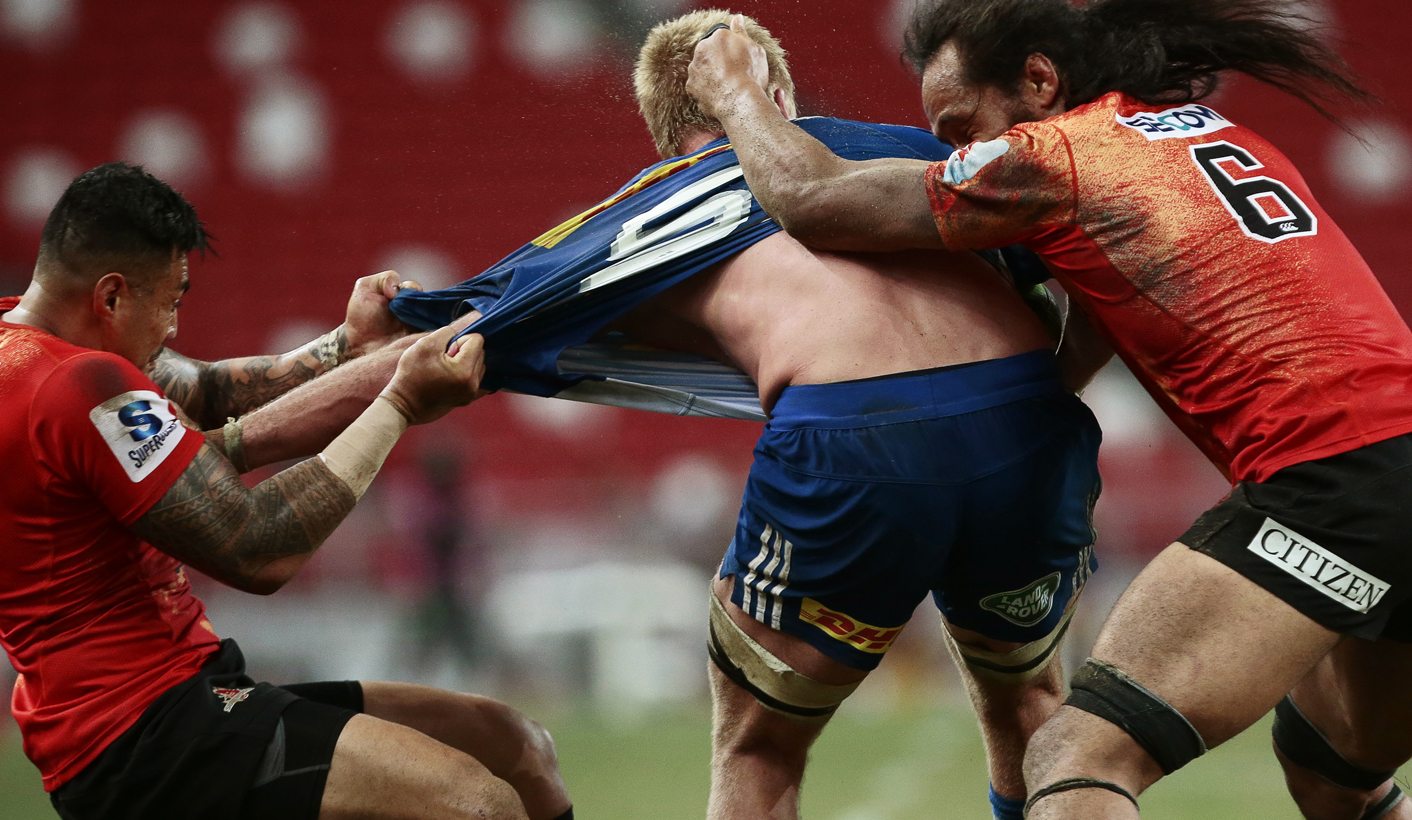 Eddie Jones said some of the Super Rugby fixtures puts him to sleep. Richard Loe called the South African derbies “as boring as goat shit”, stadium attendances have been declining year after year and the pay-TV view means that the audience for Super Rugby has probably reached its saturation in a number of countries. As a product to sell to sponsors, the competition is at risk of suffering a serious identity crisis if it doesn’t engage with fans better. By ANTOINETTE MULLER.

His views were echoed, somewhat more diplomatically, by England coach Eddie Jones, who said that while he watches most of the Super Rugby fixtures, some of it “puts him to sleep”.

Jones argued that the expansion of the competition – from 16 to 18 teams – has resulted in a dip in quality. Results like the Sharks’ 53-0 thrashing of the Kings over the weekend and a thumping 52-24 win for the Lions over the Jaguares are just some examples of how the competition is struggling to keep up.

With 18 teams, straddling 16 different time zones, the competition has seemingly tried to go big too quickly. While expansion is never a bad thing, the way in which it has happened with Super Rugby has not exactly been effective. Punishing travel schedules and an odd conference expansion has made the competition everything but user-friendly. Expansion is not a bad thing – in fact, it is one of the things that puts rugby streets ahead of cricket – but it’s the way in which this expansion is taking place that is putting the brand at risk.

The attendance figures have been sounding alarm bells for years. The Stormers were South Africa’s best supported side in 2015, with an average of around 32,400 per Super Rugby match. Compare that to the Bulls and the Sharks, who averaged just over 19,000 last season, and it’s easy to see that the appetite for Super Rugby has been dwindling for some time now.

At the start of the 2014-15 season, attendances in New Zealand had dropped by 10%. Overall, average crowds in New Zealand have dropped by about 30% in the last eight years. Compare these figures to 2006 when South African sides averaged 34,000, Australia 24,000 and New Zealand 22,000 and it’s quite obvious that something is amiss.

Of course, many factors determine whether people are willing to leave the comfort of their couch to go and watch a live sporting fixture. Having a winning team that plays exciting rugby is one factor. The economic climate is another. With the doom and gloom surrounding South Africa’s economy at the moment, it’s quite obvious that sporting entertainment has to take a back seat, especially when you have to fork out a pretty penny for the privilege of watching it on TV. But there are ways around these ebbs and flows if you are willing to get creative. Selling “family” packages is one way to draw the numbers without sacrificing too much.

The cheapest seats to visit Newlands are currently priced at R50 per ticket in the standing section and the cheapest tickets at Ellis Park are R40 a pop. These cheap seats are often unappealing to families as not only are the views ordinary, but families sometimes have to deal with somewhat unsavoury characters who have looked too deep into a bottle. Add to that the overpriced and often low quality stadium food and fans aren’t exactly going to be lining up to watch rugby.

Creating a “family zone” and selling “family tickets” is one way around this. The Australian Big Bash (the domestic T20 cricket competition) has had phenomenal success with this model. South African rugby’s franchise system already has a strong identity and support base, it’s just about making the experience as appealing as possible for those within that support base.

A move by Cricket Australia to make the competition family focused (discounts on family tickets, alcohol free zones and so on) saw ticket sales boom. Before the end of this season, average attendance increased by 22% with seven out of the eight teams breaking their domestic attendance records. It is not unthinkable that something similar targeted at rugby fans could be tremendously successful in South Africa and reignite the crowd numbers of Super Rugby’s heyday, even if the quality of rugby is, at times, tedious. The willingness of fans to venture out in cold, miserable weather is about the experience of the stadium as much as it is about having a bond with your team.

But in modern-day sport, declining ticket sales are often glossed over so long as TV viewership remains stable. But in order to keep eyeballs glued to TV screens you have to sell a good product, and if Super Rugby is not careful, it seriously risks diluting its product. Not only by expanding without thinking, but also by continuously alienating the fans on which this product is built.

The approach of more teams in bigger markets and new teams in new markets will undoubtedly see the TV numbers rise initially, but this will only offer a superficial solution. Considering its population size, the New Zealand audience might already be at saturation point. South Africa, meanwhile, does not offer Super Rugby on free-to-air TV, and with the rise of DStv costs, it’s probably also close to reaching its saturation.

Sport is a business and sponsors seek total immersion from the stakeholders and a guarantee that they are getting every ounce of exposure for their money. However, with an increasingly diluted product that is being criticised for its quality, an increasingly TV-only audience (which is limited in its reach if it’s not on free-to-air) and a seeming disconnect from fans, Super Rugby is at great risk of suffering a major identity crisis. As rugby quietly starts to take off in the United States – where games are streamed online for free – the once all powerful Sanzar might need to start looking over its shoulder or else it might just get side-stepped. DM

Photo: Pieter-Steph du Toit (C) of the Stormers in action against Tusi Pisi (L) and Liaki Moli (R) of the Sunwolves during the Super Rugby match between the Sunwolves and the Stormers at the National Stadium in Singapore, 14 May 2016. EPA/WALLACE WOON