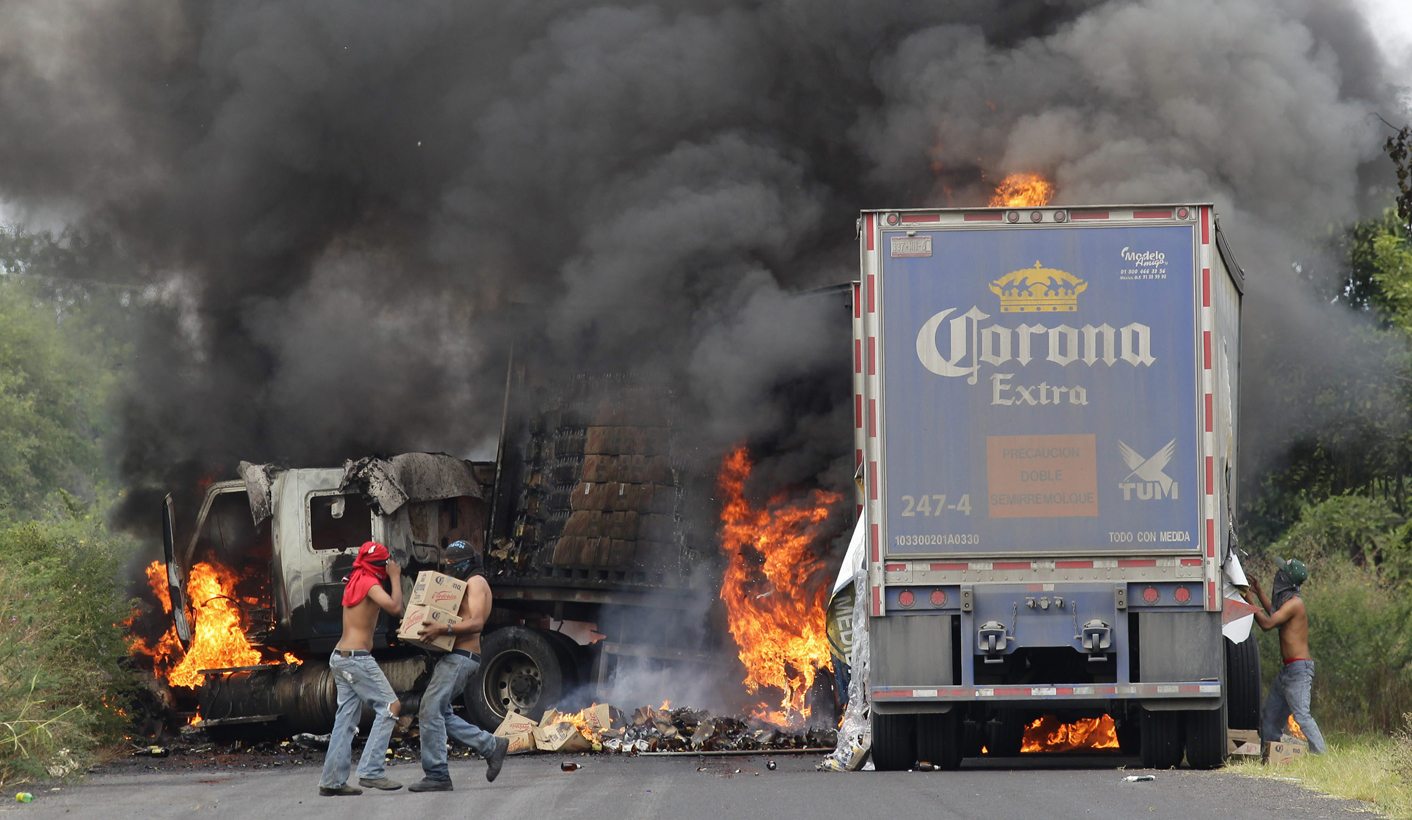 Photo: Armed groups burn trucks during a confrontation with self-defense groups as they try to recover the control of the municipality of Antunez

Today’s tough international regime to deal with narcotic and other dangerous drugs, Colombia’s Justice Minister Yesid Reyes said in the lead up to the latest UN policy review, is like the famous definition of insanity usually attributed to Albert Einstein: doing the same thing over and over again, yet expecting different results. Commentary by Lucia Sobekova for INTERNATIONAL CRISIS GROUP.

Soon after Yesid Reyes’ comments, President Juan Manuel Santos of Colombia spoke of the international community’s inability to acknowledge the drug issue as primarily a human rights and health, not security, problem. Instead, he suggested, punitive policies in the name of better security have not only failed to eliminate illicit drug flows or significantly reduce demand, but have also contributed to what appears to be ever more violence and human suffering.

Both the minister and president of the country plagued by one of the world’s biggest cocaine-production problems expressed hope that the special high-level session of the UN General Assembly (Ungass) in New York on 19-21 April would identify reforms. Many others, including International Crisis Group, also saw a rare opportunity for change. Unfortunately, that hope was misplaced: the Ungass largely missed its chance to usher in much-needed new global drug policies.

Ungass sparked considerable optimism in 2012, when the presidents of Colombia, Mexico and Guatemala proposed that it be held this year. They asserted that the unintended consequences of the war on drugs included too many victims and too much violence and corruption.

They spoke from their domestic experience. Latin America has suffered the most from dysfunctional drug policies dictated by the international community. In Mexico, more than 120,000 people have died in drugs-related conflict since 2006 alone; 6.5-million have been displaced in Colombia’s decades-old internal conflict fuelled in part by the drug business; and Guatemala, which transships more than 80% of the cocaine ultimately consumed in the US on to Mexico, ranks among the world’s most violent countries. In several parts of Latin America, drug cartels and criminal groups benefit from and contribute to widespread corruption and coercion of public officials.

The presidents envisaged a gathering that would mark the historical moment when the international approach to dangerous drugs would acquire a more humanitarian cast, allowing countries hitherto bound by legal commitments undertaken in 1961 greater flexibility in dealing with their national drug issues. It was not to be.

The Ungass final document did record some accomplishments. States agreed that the drug issue is above all a health matter and thus users should be treated with respect and given opportunities for social reintegration. They recognised that co-operation among specialised UN bodies, such as the World Health Organisation (WHO), the UN Development Programme (UNDP), the Office of the High Commissioner for Human Rights (OHCHR) and UN Women, is essential in order to include drug policy in human rights and development agendas. And they agreed that the proportionality principle should be applied in criminal offences for first-time drug users and those involved at the lowest links of trafficking chains.

There were however disappointments for reformers. One great frustration was hardly a surprise: despite mounting pressure from many member states, global leaders, civil society and UN agencies, a number of countries, led by Indonesia and supported among others by China, Singapore, Egypt, Pakistan and Iran, blocked agreement on a proposal to call for abolishment of the death penalty for drug offences. They then ruled out compromise wording that would urge a moratorium on such executions until a consensus could be achieved.

A second disappointment revolved around the decision to drop from the final document the widely-used term “harm reduction”, referring to measures that are alternatives to automatic criminalisation and could avoid needless spread of HIV/AIDS, hepatitis and tuberculosis. Governments like Uruguay, Switzerland and the Czech Republic said this amounted to a failure to recognise the value and effectiveness of the public health-oriented policies they are pursuing.

The final document’s undifferentiated placement of human rights in the same section with women, youth and communities was a third disappointment to the many states that argued for acknowledgement that human rights are a cross-cutting issue. These states believe Ungass should have emphasised the need for greater efforts to collect and analyse evidence of how drug policies differently affect women, children, youth and disadvantaged communities.

The most worrying failure of Ungass, however, was that it produced no real commitment for member states to conduct a critical review of their policies. None of the proposals for creation of a panel of experts or an experts’ working group that were on the table was adopted. Missing this opportunity to bring more evidence and expertise into the contentious policy debate means that reformers may face even tougher going in 2019, when the UN is scheduled to set its drug policy agenda for the next decade.

The immediate challenge for like-minded countries, civil society and UN agencies is thus to devise alternative proposals for continuing in a more systematic manner over the next three years the immense research and evidence-collection that is under way on existing drug policies, even without the blessing and momentum that should have come from Ungass.

If 2019 is to produce action that better reflects that achievement, however, the reformers in civil society, UN agencies and the countries that pushed for a more innovative Ungass will need to encourage the debate’s continuation in countries sticking to the old rules, including the US.

Ungass at least conducted an open global debate about what has gone wrong with the international control regime, breaking some long-held articles of faith. It showed that there are ways to address the threat of criminal drug cartels and illicit drug trafficking at the same time as protecting human rights, reducing violence and using proven public health methods to deal with illicit drug use.

So despite the disappointments, the Colombian minister may have material to disprove Einstein’s supposed dictum: repeated criticism of the old drugs policy may yet bring a new result. The three Ungass days in New York, an optimist can say, did show that meaningful policy change may be closer than ever. DM

Photo: Armed groups burn trucks during a confrontation with self-defense groups as they try to recover the control of the municipality of Antunez, Michoacan State, Mexico, 10 January 2014. Armed civilian groups controlling the access to their cities deter drug cartels from entering their territories. The Mexican government said that these groups, grown in several parts of the country, are to be considered out of the law. The government promises to reinforce security in the regions in which the self-defense groups operate. EPA/ULISES RUIZ BASURTO