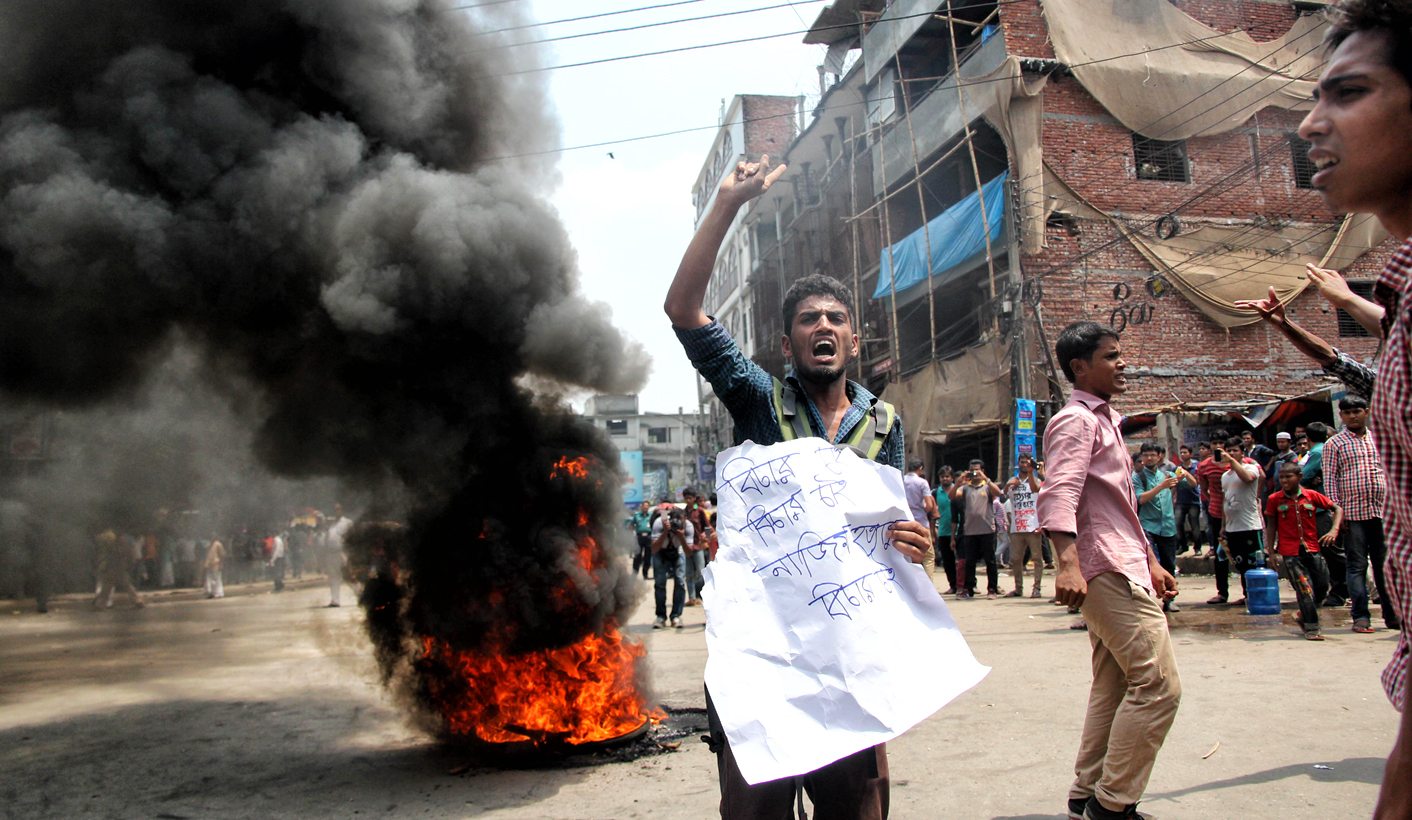 As the Awami League government’s political rivalry with the Bangladesh National Party (BNP) reaches new heights, so has its repression. At the same time, a deeply politicised, dysfunctional criminal justice system is undermining rather than buttressing the rule of law. By INTERNATIONAL CRISIS GROUP.

Heavy-handed measures are denting the Awami League government’s legitimacy and, by provoking violent counter-responses, benefitting violent party wings and extremist groups alike. The government needs to recognise that it is in its interest to change course, lest it fail to either contain violent extremism or counter political threats. A key part of a more prudent course would be to depoliticise and strengthen all aspects of the criminal justice system, including the judiciary, so it can address the country’s myriad law and order challenges and help stall a democratic collapse.

The political conflict between the AL and BNP has resulted in high levels of violence and a brutal state response. The government’s excesses against political opponents and critics include enforced disappearances, torture and extra-judicial killings. Police tasked with targeting the government’s rivals and an overstretched justice system compelled to prosecute opposition leaders and activists now also face a renewed threat from violent extremists. The permissive legal environment, however, is creating opportunities for extremist outfits to regroup, manifested in the killings of secular bloggers and foreigners and attacks on sectarian and religious minorities in 2015. The government’s reaction to rising extremism, including arrest and prosecution of several suspects without due process and transparency, is fuelling alienation that these groups can further exploit.

Reconciling with the opposition and hence stabilising the state requires both political compromises and an end to the repressive use of law enforcement agencies and abuse of the courts. Politicising the police and using elite forces, particularly the Rapid Action Battalion (RAB), to silence political dissent, are laying the seeds of future violence. By concentrating on targeting the opposition, the police are failing to curb criminality; the prisons are overburdened by the mass arrests of opposition leaders and activists; and the judiciary, perceived as partisan for trials and sentences based on political grounds, is losing credibility. The result is a justice system that swings between two extremes: woefully slow and dysfunctional for ordinary cases and speedy, undermining due process, in politically charged ones.

Any effort to reform a dysfunctional criminal justice system, including by investing in training, equipping and otherwise modernising the police, prosecution and judiciary, will be insufficient unless it is also taken out of politics. Years of partisan recruitment, promotions and postings have polarised these institutions to the point that officials no longer conceal their allegiances. Partisanship tends to determine the kinds of complaints and cases that get filed and prioritised and even informs verdicts and sentences.

The problems surrounding delivery of justice are further compounded by legal mechanisms to silence civil society and prevent media scrutiny and parallel processes that undermine due process in politically charged cases. The deeply flawed International Crimes Tribunal (ICT), established in 2010 to prosecute individuals responsible for atrocities committed during the 1971 liberation war, is an important example of the dangers of using rule of law institutions for political ends. Perceptions of injustice are creating opportunities for extremist groups and fuelling political conflict.

The BNP and its Jamaat-e-Islami ally marked the anniversary of the disputed 2014 elections with indiscriminately violent strikes and traffic blockades, which were matched brutally by the state. The BNP now appears less willing to resort to violence to unseat the government; its decision to re-enter the political mainstream gives the government an opportunity it should exploit by urgently resuming dialogue with the opposition.

To demonstrate sincerity and as a first step, it should end use of the rule of law institutions to target opponents and silence critics. Accepting legitimate avenues of participation and dissent would also help regain some lost legitimacy and the trust of citizens in the state’s provision of both justice and security. So long as there is no independent court system to arbitrate disputes fairly, the parties are likely to continue taking those disputes to the streets, but a neutral judiciary could help defuse tensions by upholding fundamental principles and preventing executive excesses. The international community can help to promote political reconciliation by, in the US and EU case, using economic levers to pressure Dhaka to respect civil and political rights, and in New Delhi’s by using close ties to urge the AL to allow the opposition legitimate political expression and participation. There is no time to lose. If mainstream dissent remains closed, more and more government opponents may come to view violence and violent groups as their only recourse.

1. Commit to accepting legitimate political opposition and dissent, including by ending use of the criminal justice system to target political critics; and respond positively to the BNP’s decision to refrain from violence and re-enter the political and constitutional mainstream through participation in the electoral process by reopening urgently a dialogue to end the destabilising political stalemate.

2. Commit to peaceful opposition, including by preventing party activists from using violence to subvert the political order; and sever ties with political allies who use violence to destabilise the government.

3. Develop consistent judicial doctrine/interpretation upholding the right to a fair trial and restraining the executive branch from undermining fundamental constitutional rights and principles, including actions against civil society institutions that undermine their ability to function freely.

To respect the constitutional right to free speech and dissent

4. Withdraw all cases against journalists, human rights groups and other civil society actors that are based on vague and dubious grounds, such as expressing views deemed “derogatory” of public officials or against the “public interest”, and end press closures and raids on media offices.

5. Withdraw the 2014 national broadcast policy and remove restrictions on online expression in the Information and Technology Act.

6. Refrain from issuing contempt of court citations to media and other civil society representatives for criticising court judgments, and overturn unjustified contempt convictions in other courts, including the International Crimes Tribunal.

7. Enforce the constitutional requirement for an independent judiciary by establishing a more transparent, consultative appointment process, including consultations with the bar councils and parliamentary endorsement.

8. Avoid statements alleging the identity of those responsible for crimes while investigations are ongoing; and end the practice of presenting suspects to the media, rather than in court, as required by the constitution.

9. Issue clear orders against any executive bodies or officials found to be interfering in the judicial process.

10. Insist on the need for an adequately resourced and staffed Supreme Court secretariat as fundamental to achieving judicial independence; provide the necessary resources to and scrutinise the workings of the lower judiciary; and hold to account judges who fail to provide a fair trial.

To modernise the criminal justice system

11. Introduce amendments to adapt the Code of Criminal Procedure 1898, Evidence Act 1872, Police Act 1861, Penal Code 1860 and the Jail Code to modern challenges, including by implementing Bangladesh Law Commission recommendations on increasing use of technology and forensic and other modern evidentiary standards in investigations and trials.

12. Professionalise the police, prosecution agencies and lower judiciary, including by introducing a merit-based selection and recruitment process, secure tenure and effective mechanisms to evaluate performance and check political interference.

13. Identify personnel, training and resource needs particularly for the Police Bureau of Investigation, while developing specialised investigation units for national- and district-level policing.

To push for a broader political reform agenda

To the International Community:

14. Link some development assistance, and in the US case the restoration of the Generalised System of Preferences (GSP) facility, to demonstrable improvements in human rights, free speech and association and fair trial.

15.Use, in the case of India, its close relationship with the AL to urge the government to allow legitimate avenues of political expression and participation to the opposition. DM

Photo: Students of the Jagannath University (JnU) demonstrate and set fire to a pile of bicycle tyres as they protest against the murder of fellow student and online activist, 25-year-old law student Nazimuddin Samad, in the old part of Dhaka, Bangladesh, 07 April 2016. The secular activist and critic of religious fundamentalism was murdered in Bangladesh allegedly by Islamist extremists, although the police are still investigating the motive and have not ruled out any other hypothesis, several sources said. EPA/MONIRUL ALAM