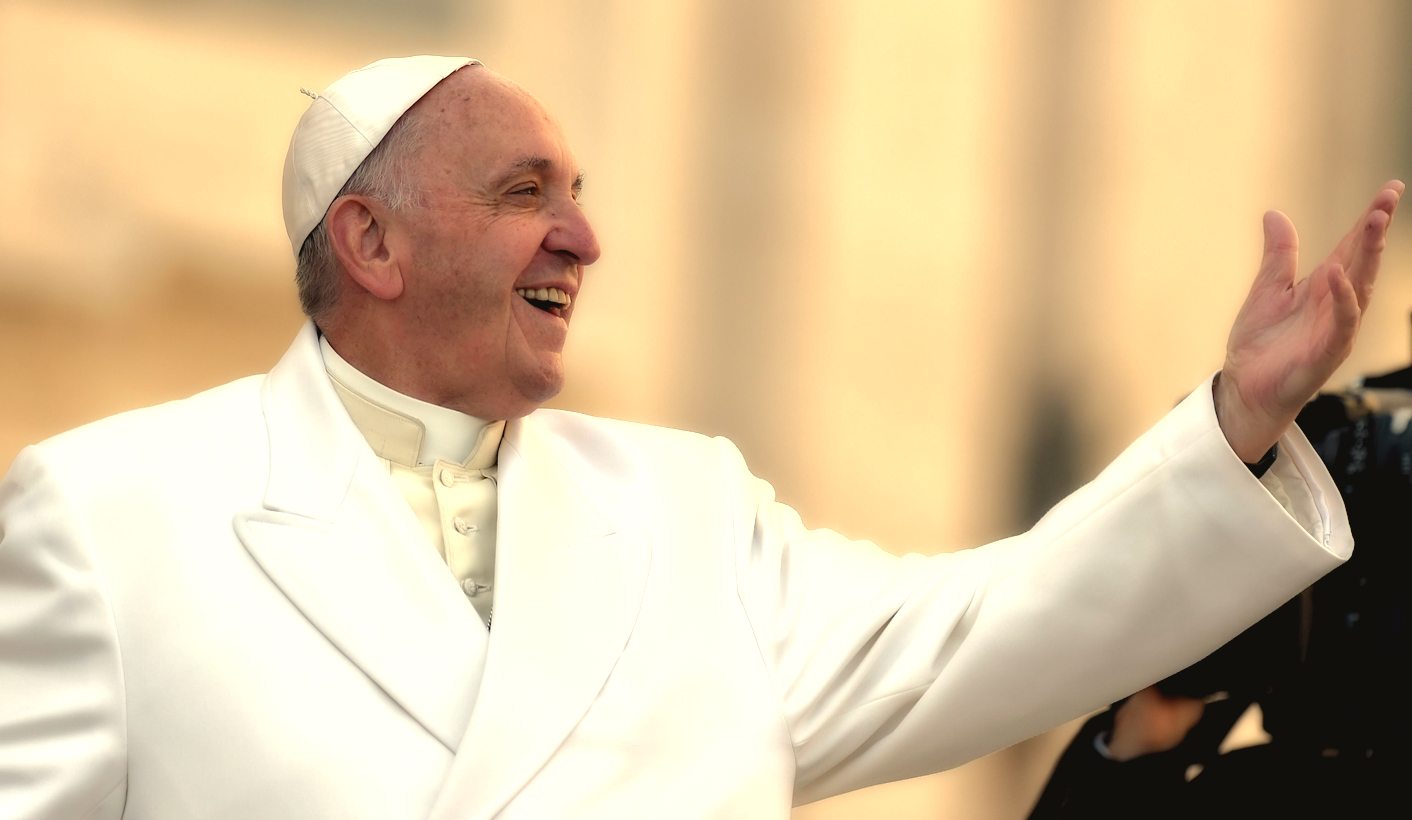 In a new document on the family, entitled Amoris Laetitia (The Joy of Love) Pope Francis has attempted to redirect the way that Catholics think about themselves. The document is the fruit of two sittings of the Synod of Bishops on the family in 2014 and 2015. Francis has not changed doctrine, but has asked Catholics to embark upon a new process of discernment and dialogue. The Pope does not sew up or propose solutions for issues facing families and the Church’s teaching on family life but moves the question around family life into the pews – and into the consciences of Catholics. The 256-page Apostolic Exhortation is striking for is breadth - and its detail. By RUSSELL POLLITT.

Right from the beginning of Amoris Laetitia (AL) Pope Francis cautions that not all doctrinal, moral and pastoral issues need to be settled by interventions from the magisterium. He says that countries and regions can seek solutions better suited to their own contexts. This, from the start, is a mind shift for Catholics because it suggests a decentralisation of power from Rome.

The Pope acknowledges that family life is complex and therefore is not rooted in a set of abstract ideals but rather is a lived, concrete experience. He suggests that to excessively idealise marriage is to make it unattractive and inaccessible:

“…we find it difficult to present marriage more as a dynamic path to personal development and fulfilment than as a life long burden.”

The Pope reaffirms the Church’s position on marriage but certainly recognises that there are a number of issues that need to be studied urgently and thoroughly.

The Archbishop of Cape Town, Stephen Brislin, who was a participant at the Synod and is President of the Southern African Catholic Bishop’s Conference, told the Daily Maverick that he was “delighted by the publication of Amoris Laetitia. Firmly grounded in Scripture and the teaching of the Church, it deepens our appreciation of the beauty of marriage and family as a God-given gift. Often marriage can be idealized without taking into account the concrete realities people face, but the document calls us to a ‘humility of realism’, the pastoral discernment of different situations and an appreciation of mitigating factors when realities do not match up to Christ’s teaching.”

With his new document, Pope Francis broadens the definition of ‘family.’ He does not focus on the so-called ‘nuclear’ family but shows that he is well aware of the family as a much wider network of many relationships. Most often, in the past, the Catholic Church has dominantly taught and spoken about family in the ‘nuclear’ sense. This is a change in mindset.

In what is probably the most sensitive and controversial chapter of the document – chapter eight, the Pope looks at “fragile, complex and irregular situations.” It is obvious that Francis is grappling with the most controversial subjects that attracted the attention of the world’s media at the two sittings of the Synod of Bishops. He wants the Church to “avoid a cold bureaucratic morality in dealing with more sensitive issues.”

In this section Francis deals with the question of divorce and re-marriage. He confirms that some forms of union radically contradict the ideal of Christian marriage – or only realize it in a partial or analogous way. He suggests that the “constructive elements” in these situations should not be disregarded by the Church.

He warns that when people find themselves in situations that do not match up to the ideal of the Christian marriage we are to “avoid judgments which do not take into account the complexity of various situations.” He continues to say that the Church must reach out to everyone and “help each person to find his or her proper way of participating in the ecclesial community.” He warns that culpability for marriage break-ups is “not equal in all cases.” He draws on some of the best-known theologians in the Church’s history – most notably St. Thomas Aquinas – in reflecting on mitigating factors and the attribution of responsibility and accountability for actions.

Francis calls for the divorced and civilly remarried to be “more fully integrated into Christian communities in the variety of ways possible, while avoiding scandal”:

“The divorced who have entered a new union, for example, can find themselves in a variety of situations, which should not be pigeonholed or fit into overly rigid classifications leaving no room for a suitable personal and pastoral discernment.”

The Pontiff writes that divorced people are not excommunicated and can participate in the life of the Church.

Reacting to the document, Archbishop William Slattery of Pretoria, spokesperson of the Catholic Bishops’ in South Africa, said “All family life is a shepherding in mercy. Special care must be given in the Church community to those who experience struggle and failure, they are part of us, they must be welcomed, they must be invited to bring their gifts to the service of the family of God”

The Pontiff does not propose solutions but guides bishops and priests in possible responses. This may seem a radical step to those unfamiliar with the history of a Church that we have grown to see as highly centralized, with doctrines, laws and practices sent down from on high to us to be applied in every case.

Slattery goes on to say:

“While the exhortation flows directly from the Synod and traditional Church teaching, the Pope – as usual – moves far from the hard realities of cold legislation to embrace with tenderness the lived experience of this the most human of all institutions.”

In what will be a controversial move, Pope Francis appeals strongly to the conscience of individuals and asks that this be respected. He says that the Church is “called to form consciences not to replace them.” By this he suggests that Catholics can no longer get away with being passive members of the Church, the ‘acted upon’, the ‘receivers’ of sacraments and sanction. He reminds all members of the Church of their responsibility to form and inform their consciences so that they can make moral decisions.

Pope Francis is also critical of the Church’s recent pastoral praxis. He says the Church has “been on the defensive wasting pastoral energy on denouncing a decadent world without being proactive in proposing ways of finding true happiness.”

The Pope says little regarding homosexuality in the text. However, what he says indicates a shift in thinking. Francis does not use the words “homosexual tendencies” but says “homosexual orientation.” He talks about “homosexual persons.” This is not insignificant. Francis calls for respect and for refrain from any form of unjust discrimination and condemns any form of aggression or violence. He does however reiterate the Church’s position: marriage is between a man and a woman. He speaks of “unions between homosexual persons” not condemning them but saying that they cannot be placed on the same level as marriage.

Pope Francis regrets that “ordained ministers often lack the training needed to deal with complex problems facing families.” He calls for a revision of the training and formation of those preparing to be minister and suggest that families, and women in particular, need to be involved in helping train priests.

He reminds priests “that the Church is not a tollhouse, it is a house of the Father where there is a place for everyone with all their problems.”

Archbishop Brislin said: “Characteristically, Pope Francis calls for mercy on the part of pastors when dealing with complex situations.”

The Pope says to his clergy, “we put so many conditions on mercy that we empty it of its concrete meaning and real significance. That is the worst way of watering down the Gospel.” He speaks of the “logic of mercy.” It seems as if Francis is saying that the Church’s teaching is a standard and a point of reference, the goalposts and goal of all our dialogue and discernment, but the game is played (under the rule of love and mercy) in the field of daily life.

Archbishop Slattery comments, “This document exhales the spirit of the Gospel, it is concrete, full of mercy and seeks to strengthen marriages. As the Pope says: ‘No family drops down from heaven perfectly formed, families need constantly to grow and mature in the ability to love…. may we never lose heart because of our limitations’”.

No doubt there will be many and varied reactions to this Apostolic Exhortation. Without changing official Church practice, Pope Francis has embarked on a new process: changing the way all Catholics think about themselves. Passivity and inertia is no longer an option in 21st century. This exhortation does not resolve and sew up the issue of irregular marriages but moves the important questions about family life into the pews – and into the consciences of Catholics. DM

Photo: A file picture dated 24 February 2016 shows Pope Francis arriving to lead the weekly general audience in Saint Peter’s Square, Vatican City. The apostolic exhortation on family called ‘Amoris Laetitia’ (The Joy of Love) is to be published by Pope Francis on 08 April 2016. The release is summarising the outcomes of the Family Synod and is widely anticipated EPA/ETTORE FERRARI.