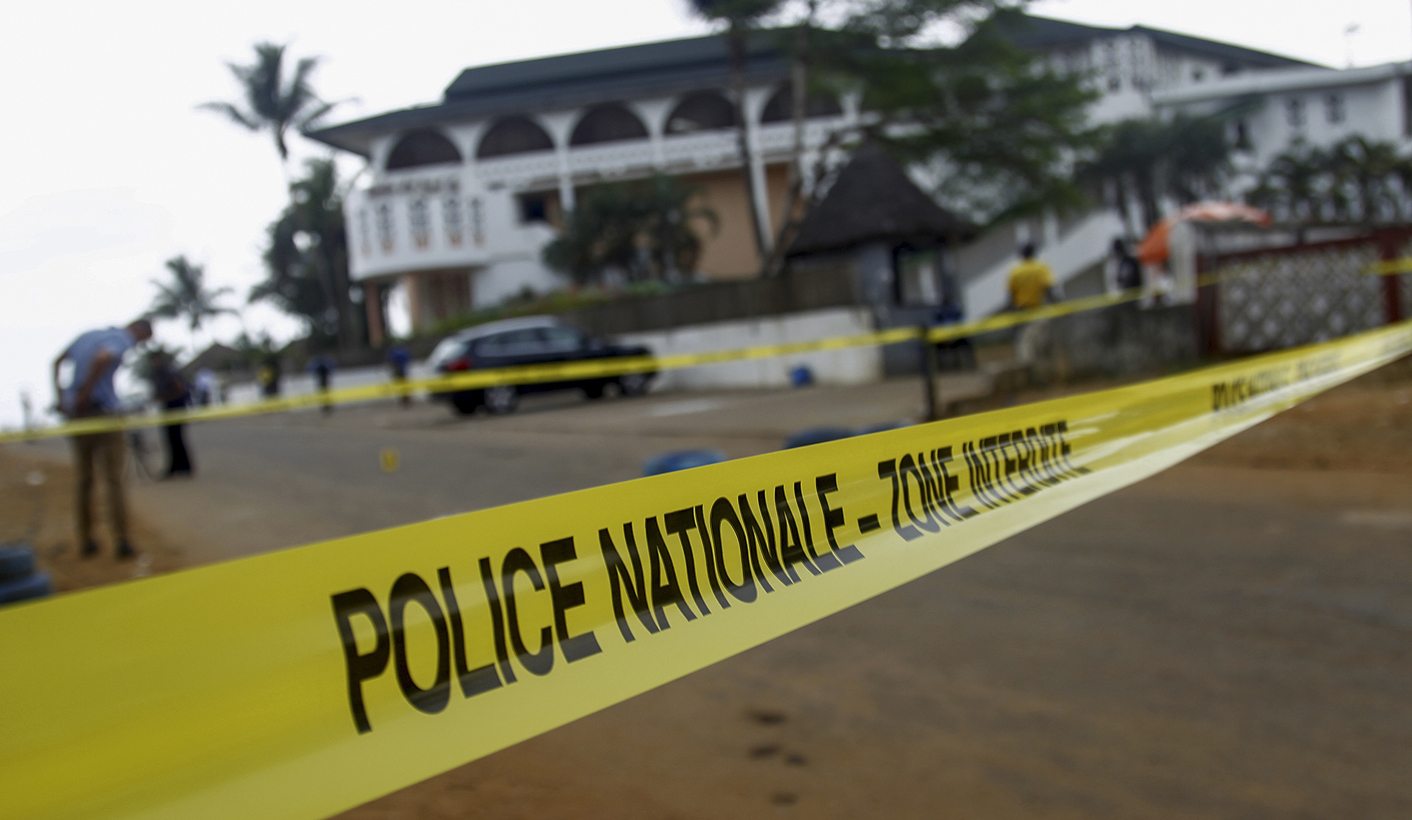 Three West African countries, three attacks, three bloody crime scenes. At least 67 dead bodies. Over the last six months, al-Qaeda in the Islamic Maghreb has got bolder and extended its range, now targeting places with no obvious connection to violent Islamist extremism. Cote d’Ivoire is merely the latest casualty in a calculated campaign of terror that’s likely to get worse before it gets better. By SIMON ALLISON.

A brutal, grisly pattern is emerging. In November, gunmen attacked the Radisson Blu hotel in Bamako, Mali. The hotel is popular with westerners. 21 people were killed, and a branch of al-Qaeda in the Islamic Maghreb (AQIM) claimed responsibility.

In January, gunmen attacked the Splendid Hotel and a neighbouring restaurant in Ouagadougou, Burkina Faso. The hotel and restaurant is popular with westerners, 30 people were killed, and a branch of AQIM claimed responsibility.

And now, in March, gunmen have attacked the L’Etoile du Sud resort in Grand Bassam, a beach town in Cote D’Ivoire. The resort is popular with westerners. At least 16 people were killed, and a branch of AQIM claimed responsibility.

Terrorist attacks are nothing new to West Africa or the Sahel. Nor are attacks on foreigners. From Boko Haram to Ansar al-Dine to AQIM to Islamic State, various countries in the region have been grappling with violent Islamist extremism for quite some time.

However, tellingly, neither Burkina Faso nor Cote D’Ivoire is among these countries with a history of conflict with Islamist groups. And the clinical, co-ordinated nature of these three attacks indicate that the danger — while always rooted in local politics — is morphing into a larger threat. This is serial terrorism on a regional scale.

“The expansion of AQIM in the Sahel is perhaps best explained by the shifting dynamics in its operational base in northern Mali. The downgrading of French forces in the region and an under-equipped Malian and UN peacekeeping mission has seen AQIM and affiliates regain a foothold in a region from where they were severely curtailed amid France’s Operation Serval in 2013. AQIM’s infiltration of nonArab communities, probably through linkages created by its al-Mourabitoun and Macina Liberation Front offshoots, may also be allowing AQIM to expand its operational network into countries such as Cote d’Ivoire, Burkina Faso, Senegal and perhaps even Guinea,” said Ryan Cummings, director of Signal Risk.

AQIM’s reach is highlighted by the sheer distance between its presumed northern Mali headquarters and the Cote D’Ivoire attack: 2,000-odd kilometres and a national border (plus countless security checkpoints along the way) was no impediment to the gunmen responsible. Even more ominously, Fox News is reporting that a senior US official was the target of the attack, and would have been present in Grand Bassam only hours later. If true, this indicates the existence of a comprehensive intelligence-gathering operation that underlines AQIM’s sophistication.

And the group will get stronger, according to a senior US army official. “[The hotel attacks] raised the profile of the group and will help the group do a [few] things. One, show that it is still relevant. Two, help it to recruit personnel and commit resources. And three, create the impetus to do more attacks like that,” said Colonel Bob Wilson, Third Special Forces Group Commander, in an interview with Reuters.

Martin Ewi, senior researcher at the Institute for Security Studies, said the high-profile, headline-grabbing nature of these attacks also reflects the growing intensity of the AQIM’s rivalry with the Islamic State (IS) for pre-eminence within the jihadist community in the region, with each group looking to outdo each other. In recent years, Islamic State has entirely overshadowed al-Qaeda in the Middle East, forcing al-Qaeda to prioritise and encourage AQIM, its West and North African affiliate.

This competition for attention explains why Cote D’Ivoire and Burkina Faso were chosen as targets: the very fact that neither has a history of Islamic extremism means violence committed there is more newsworthy than when similar acts occur in war zones like Syria or Iraq, or even Mali.

“What the terrorists have learnt recently is that the attacks that really get covered are attacks in new countries. I can imagine these terrorists having the map of Africa before them and looking at the countries that have never been attacked,” said Ewi. “I think we will see more such attacks. Mali’s immediate neighbours remain under threat.”

AQIM’s new modus operandi, as displayed to such devastating effect in the attacks in Mali, Burkina Faso and Cote D’Ivoire, is a signal that the group is alive and well, and needs to be taken seriously: by individual countries, by regional and continental bodies, and even by Islamic State. A failure to confront the threat is an invitation for more and worse violence.

There are various ways in which the threat can be mitigated, as outlined in a comprehensive new International Crisis Group report on al-Qaeda and Islamic State. Its recommendations are mostly common sense, but are all too often ignored by policymakers across the world. They include: not alienating nonviolent Islamist groups, such the Muslim Brotherhood; using force more judiciously, to avoid civilian casualties; maintaining channels of communication with Islamists, no matter how extreme; investing in conflict prevention and reconciliation efforts, and curbing the targeted killings and drone strikes that so often breed resentment.

None of these are quick or easy solutions. They are not even guaranteed to work. But if governments in West Africa are to have any chance of breaking AQIM’s pattern of violence, this is a good place to start. DM

Photo: Ivorian police cordoned off an area outside of the ‘Etoile du Sud’ hotel in Grand Bassam, Ivory Coast, 14 March 2016. According to reports fourteen civilians and six assailants were killed on 13 March 2016 when gunmen opened fire on guests on the beach at the hotel in the town of Grand Bassam which is popular with foreigners. Al-Qaeda in the Islamic Maghreb (AQIM) claimed responsibility for the attack. Among those killed were a French and German national. EPA/LEGNAN KOULA