Nigeria and SA: Africa’s superpowers try to kiss and make up 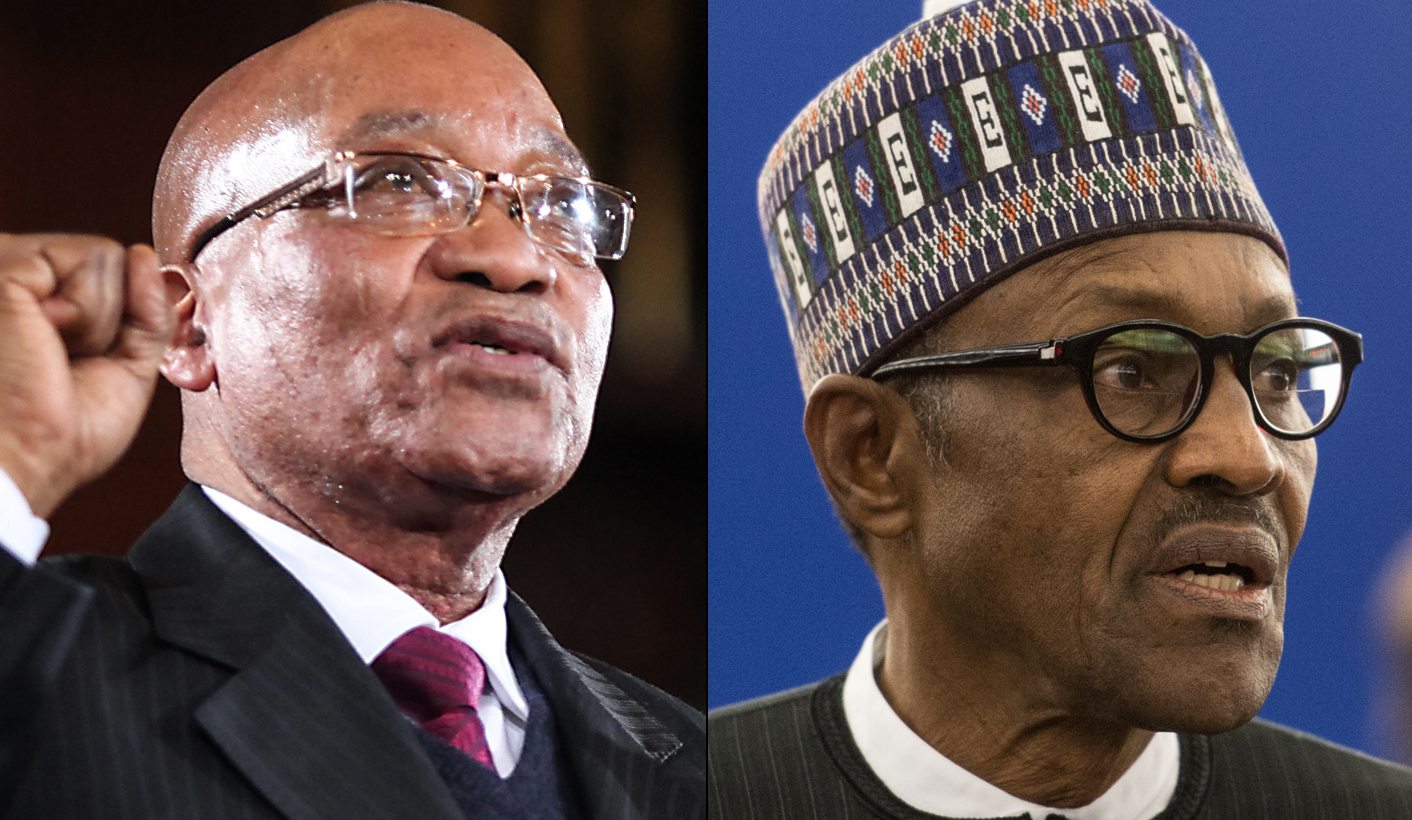 President Jacob Zuma will travel to Nigeria next week with a large delegation of ministers and business leaders in a concerted attempt to repair the strained relations between Africa’s two biggest powers. By PETER FABRICIUS for ISS TODAY.

This article was first published on ISS Today, a publication of the Institute for Security Studies.

Nigeria-South Africa relations went sour under the previous Nigerian presidency of Goodluck Jonathan, reaching a low point in April last year when Nigeria recalled its acting high commissioner. Whether true or not, Pretoria took this as a protest against the eruption of xenophobic attacks, mostly directed against other Africans, including a few Nigerians.

The South African Department of International Relations and Co-operation (Dirco) retaliated with a remarkably strong statement, which clearly vented resentment that had been accumulating for some time. It lashed Nigeria for wanting “to exploit such a painful episode for whatever agenda”. And it took a hefty swipe at Nigeria for the more than nine months’ delay in repatriating the bodies of the 84 South Africans who had died when a church collapsed in Lagos the previous year. And for returning them “in a state that they could not be touched or viewed as required by our burial practice”.

Strong stuff. By then Muhammadu Buhari had already been elected to succeed Jonathan; and so the Dirco statement made clear that Pretoria was happy to be seeing Jonathan off and would reset bilateral relations once Buhari was in office.

Yet relations have not really been reset, nearly a year later. There are still many niggles, including the “harsh” fine of US$5.2-billion (later reduced to US$3.9-billion) Nigeria imposed on South African cellphone operator MTN for failing to disconnect unregistered SIM cards.

Several other South African companies invested in Nigeria have run into trouble with the authorities. Last month, three South Africans and one Nigerian employed by the Sun International hotel group were arrested by the Economic and Financial Crimes Commission and detained without charge for four nights. Digital satellite television company MultiChoice has been charged with price gouging, and other companies have had problems with the Nigerian authorities.

There is not a great deal of sympathy in Nigeria for MTN because it has made so much money. Many Nigerians believe it was grossly negligent about obeying the rules and arrogant enough to think it did not have to.

There is also friction between the two countries over visas. Nigerians often complain that Pretoria is reluctant to grant them visas and then only issues them for three months, whereas Nigeria is ready to issue them for South Africans for much longer, or scrap them entirely.

Jakkie Cilliers, Head of the African Futures and Innovation Section at the Institute for Security Studies (ISS), said the ISS has encountered occasional obstacles from Pretoria in granting visas to Nigerians to work for the organisation. He nevertheless acknowledges that the extent of Nigerian involvement in organised crime and drug trafficking in South Africa is not just a stereotype and makes visas necessary.

“This is a country largely without functioning institutions and therefore it is difficult to accept documentation, such as passports, at face value. In that sense the South African government has a responsibility that it should not shirk. What we probably need is a comprehensive system that, after a thorough process, results in multi-entry, multi-year visas.”

It is significant that South African Home Affairs Minister Malusi Gigaba will be in Zuma’s delegation.

Lulu Mnguni, South Africa’s High Commissioner in Abuja, acknowledges there are “some irritants” in the relationship, including the visa issue which he believes Gigaba will resolve next week. Trade and Industry Minister Rob Davies will also be in Zuma’s delegation to “settle certain uncertainties which have developed” in the trade relationship.

One of the main items on the agenda is likely to be resolving the MTN fine issue. Mnguni said that although his office always emphasises to South African companies that they must respect Nigerian law, he felt the fine Nigeria imposed was “a bit harsh and not in keeping with our good relations with Nigeria”. He had pointed this out to Abuja and hoped it would be borne in mind when negotiations resumed imminently to settle the issue.

Overall, though, he did not think Nigeria was targeting South African companies. “It’s just that most foreign companies here are South African; there are over 150 of them. Perceptions are being developed. Our task is to use our friendship to clear the air so our companies can help to develop Nigeria.”

But Dianna Games, Executive Director of the South Africa-Nigeria Chamber of Commerce, says the chamber believes the question of whether or not Nigeria is targeting South African companies should be raised on Zuma’s visit next week. “If there is any truth in it, it should be dealt with. If not, then it’s important that during the state visit, a statement is issued at the highest level giving the assurance that this is not the case.”

Mnguni said the strategic aim of Zuma’s state visit was to strengthen both political and economic ties with Nigeria. Economically, one of the main aims was to help Nigeria diversify its “monoproduct” economy, including mining its minerals and helping it to improve its “epileptic” electricity supply and to better its agriculture and tourism.

The presence of Defence Minister Nosiviwe Mapisa-Nqakula in Zuma’s delegation raises intriguing questions about the kind of defence co-operation the two countries have in mind, though her ministry is keeping mum about it. All of this makes for a busy schedule for Zuma’s delegation.

And apart from economics, the two giants of Africa have also been at odds politically for some time, clashing on international issues such as Western military intervention in Libya and Côte d’Ivoire.

Goodluck Jonathan’s Nigeria vehemently opposed the candidature of South Africa’s Nkosazana Dlamini-Zuma for the chair of the African Union Commission in 2012. He also tried to block or hobble the South Africa-championed African Capacity for Immediate Response to Crises — a mechanism whereby volunteer countries would form coalitions of the willing to intervene militarily in continental conflicts.

Jonathan clearly resented what he regarded as South Africa beginning to flex its muscles too boisterously on the continent, including potentially in West Africa, Nigeria’s backyard.

Cilliers believes a fundamental cause of the friction between the regional superpowers is their different world views. “For South Africa, it’s basically an anti-Western, pro-Chinese, colonialist interpretation. The Nigerians are largely pro-Western and have no qualms about, for example, accepting US military help. There is often a deep sense of frustration amongst Nigerians about the extent to which South Africa is trapped in the post-colonial debate of the 1960s – something that the Nigerians have long since graduated from.”

Mnguni said the strategic aim of Zuma’s visit would be to resolve such issues “to ensure that the two major economies on the continent don’t mutually exclude but rather reinforce each other”. The aim would be to adopt common positions at the United Nations and in other multilateral forums, “so that whatever we embrace does not leave the continent divided”.

These are lofty goals. But Anton du Plessis, Executive Director of the ISS, is not entirely convinced that’s what this visit is really all about. He acknowledges Mnguni’s point that “getting the relationship on track is certainly good for Africa”.

With a sceptical eye on Zuma’s mounting problems back home, he adds, “but the biggest winner would probably be South Africa and Zuma. He needs new friends. And a powerful one like Buhari comes at a good time.”

How often do we find ourselves asking about Zuma’s foreign policy initiatives, what’s in it for him? DM