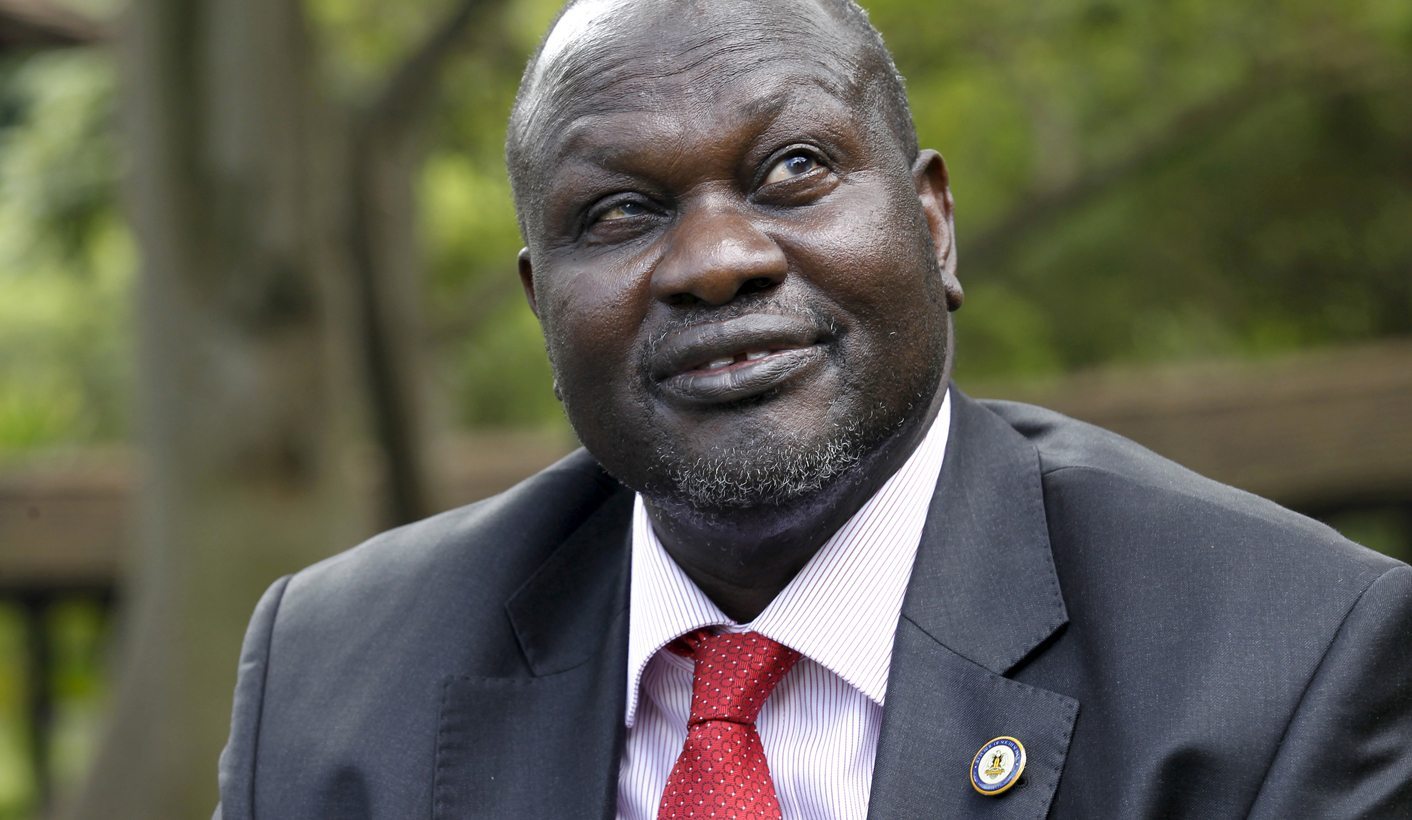 It’s crunch time in South Sudan. With the peace deal straining at the seems, and rebel leader Riek Machar due to take his place in the capital, the situation on the ground remains tense. International mediators will have to maintain a united front if they are going to keep the warring parties in check. By Casie Copeland for the INTERNATIONAL CRISIS GROUP.

In the heat of the dry season, Juba waits, knowing big things are on the horizon. After two years in the bush, a handful of Sudan People’s Liberation Movement/Army-In Opposition (SPLM/A-IO) officials are back in town, though their leader, Riek Machar, and his forces are absent. Economic crisis permeates every facet of daily life, with relief in sight only if Machar returns and a deal is made with old adversaries in Sudan. Questions about war and peace mingle with the urgent task of daily survival in a capital that has tried hard to return to normal after the targeted ethnic killings of December 2013. At least 27,000 civilians still do not feel safe enough to leave camps the UN protects.

Yet, there are signs of hope. The peace agreement for South Sudan that the regional organisation the Intergovernmental Authority on Development (IGAD) brokered in August 2015 is holding, though its provisions are not implemented. A transitional government and the cantonment of thousands of fighters should be in place and numerous reform processes underway, but they are not. The ceasefire is largely a success in the Greater Upper Nile crucible of the original war but under strain elsewhere, as conflict has expanded to the former Western Equatoria and Western Bahr el Ghazal, and in the wake of violence and attacks on civilians sheltering at a UN base in Malakal on 17-18 February.

Machar, the head of the armed opposition, refuses to return to Juba to help form the government without substantive progress on the transitional security arrangements. While opposition generals negotiate around the clock with the government in Juba to make this happen, Machar is accused of sacrificing the agreement to pursue his wider political ambitions. For its part, the government has embarked on an ambitious process of establishing 28 states from ten – a move that partly drove the violence at the UN base in Malakal – while countering rebellion in the Equatorias and former Western Bahr el Ghazal.

The institutions charged with overseeing the agreement, principally the Joint Monitoring and Evaluation Commission (JMEC), which reports to the IGAD Heads of State – in this case the core quartet of Ethiopia, Uganda, Sudan and Kenya – are in equally poor shape. JMEC’s membership is diverse, including, among others, the warring parties, civilian political opposition, IGAD member states, UN, African Union (AU), Troika (US, UK and Norway), and China. Its chair is the former Botswanan President Festus Mogae, whose deputy is ex-Guinean Prime Minister François Fall, both deliberately chosen from outside a region whose deep and competing equities in South Sudan continue to generate controversy, even when it comes to JMEC staffing and leadership roles.

IGAD’s failure to meet to decide contentious issues has left JMEC unable to respond when the parties create facts on the ground. On 24 December, as soon as its chairman was on a flight out of Juba following the first formal JMEC meeting with both government and SPLM/A-IO, South Sudan President Salva Kiir decreed establishment of the 28 states. By the time the IGAD foreign ministers called for the creation of a boundary commission following formation of the transitional government in late January, the 28 states were a reality. New governors, state ministers and county commissioners continue to be appointed and take up their posts, and talk in Juba is more focused on the winners and losers of this process than overall peace implementation. JMEC – never designed to mediate but rather to oversee and report to the Heads of State – almost looks set up to fail.

Even if implementation were to progress, the government’s empty coffers would struggle to meet the most basic existing requirements, let alone the additional structures the peace agreement outlines. Due to inflation, the lowest-level salaries no longer even pay civil servants for their bus fare to work. The August agreement demands creation of more than twenty new institutions, includes provision for the cantonment of tens of thousands of fighters and requires the movement of thousands of government soldiers 25km outside of Juba, among other costly provisions. At least some of the latter are political or technical additions not negotiated by the warring parties, which gives the government further grounds to deny responsibility for their financing.

Western donors – many of whom were both official witnesses to the peace agreement and South Sudan’s original patrons at independence – are reluctant to throw good money after bad. They say they will not “reward” a government that destroyed its own nascent infrastructure and brought itself to the brink of fiscal ruin through corruption and excessive military spending. China, with less historical hang-ups, is more willing to engage within its own parameters, particularly by giving in-kind support. Its offer of tents, generators and other mobile infrastructure to support the cantonment process helped break the deadlock on transitional security arrangements and removed at least one obstacle to the agreement’s implementation.

As temperatures continue to rise in Juba, so do tensions. Many Western donors feel the government is holding them and the peace deal hostage in the hope of getting cash for implementation; there is near-constant brinkmanship between government and donors over small but critical matters such as payment for hotels and flights for opposition figures to return to Juba. The government argues it should not be asked to fund the SPLM/A-IO, whose chair has profited from the war.

But if the donors want peace, they will have to pay. At times their priorities look skewed. The overpriced and underperforming internationally-led Ceasefire and Transitional Security Arrangements Monitoring Mechanism receives millions, while the National Architecture for the Implementation of the Permanent Ceasefire, whose effective functioning is critical to the agreement’s overall success, has no financial provision.

The risks facing South Sudan’s peace process are made worse by the danger of losing its regional anchor. The IGAD quartet’s domestic distractions and some minor bilateral spats have caused JMEC to flounder, with large external players – primarily the Troika and especially the US and China, the latter providing practical incentives – stepping in to keep up the momentum. Though welcome, the backstopping threatens the same fate for this agreement as the 2005 IGAD-brokered Comprehensive Peace Agreement between Sudan and the then Sudan People’s Liberation Movement/Army (SPLM/A), which ultimately lead to South Sudan’s independence. Then the region took a backseat to the Troika and UN for much of the implementation, many of whose provisions fell by the wayside, laying the groundwork for the conflicts in South Kordofan and Blue Nile; the ongoing dispute over Abyei’s status (and a UN peacekeeping mission of its own); and the failure to meaningfully transform the leadership in Khartoum or the SPLM/A.

The current South Sudan peace agreement was a product of careful compromise by the IGAD Heads of State following months of mediation supported by the wider international community. At the outset of the war, Uganda backed Juba, and Sudan provided more muted support to the SPLM/A-IO, with greater regional confrontation a distinct possibility.

Yet, to the surprise of many, Sudanese President Omar Bashir and Ugandan President Yoweri Museveni found common ground in resolution of the war and a springboard for improvement in their bilateral relations. Sudan and South Sudan ties, which deteriorated soon after independence and led to armed confrontation over Heglig, have also improved. The start of negotiations over oil fees and other outstanding issues such as the border, armed groups and Abyei, offers the prospect of stabilising the hard-won regional peace and is welcome.

Reinforcing Peace or Reverting to War

South Sudan is at a critical juncture. Decisions made in the coming weeks will determine whether the country will continue the process of pulling back from further war and economic ruin or falling back into conflict and economic crisis. Peace is required for an international bail-out, and the international community should provide this incentive. At the same time, renegotiation of oil fees with Sudan, which could mitigate some of Juba’s currency crisis, offers the prospect of peace between the two neighbours, as talks expand into major outstanding post-independence issues. With the stakes so high, IGAD needs to continue to step up its role, as more mediation than oversight is required. South Sudan has come so close to implementing the peace deal, but making it a reality requires a unified IGAD and JMEC front in the service of peace. DM