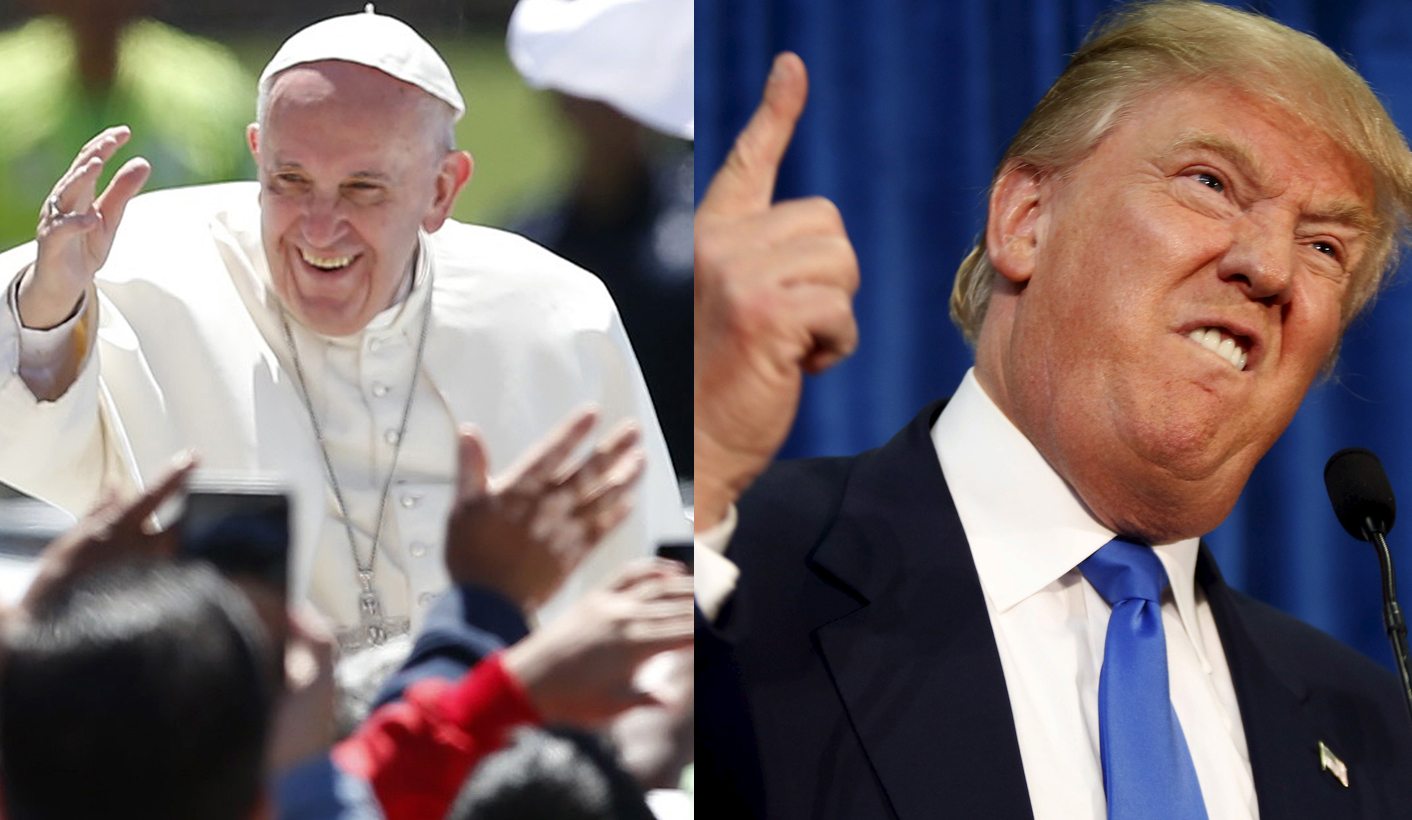 Two reports this week confirm that Pope Francis and his top management are locked in a battle. It was revealed by a member of the Papal Commission set up to deal with clergy abuse, that top officials in Rome are resisting instituting processes that the Pope himself and his closest advisors have sanctioned. Francis faces opposition to implementing his vision and reform of the Catholic Church and the resistance comes from within the Vatican itself. By RUSSELL POLLITT.

The Pope has just completed another gruelling voyage, this time to Mexico via Cuba.

In Cuba he had a historic meeting with Russian Patriarch Kirill. Francis has, since be became Pope, insisted that encounter and dialogue are key to working out differences and divisions. He sought a meeting with Kirill to try to open a space for dialogue in order to reconcile a long and deep conflict between the Catholic Church and the Russian Orthodox.

Francis believes that conversation, which builds mutual trust, will help untangle the theological knots that have divided the two. The two signed a declaration covering a wide range of topics including how Catholics and Orthodox can work together for unity. They also expressed their mutual concern for the persecution of Christians in the Middle East and North Africa and the great poverty in the world. They agreed“to defend the demands of justice, the respect for people’s traditions, and an authentic solidarity towards all who suffer.”

While on a visit to Mexico earlier this week, he forthrightly told the Mexican bishops what he thinks. This was a not a message for them alone, but, I suspect, for all leaders of the Catholic Church.

Speaking to Mexico’s political leadership he warned against protecting self-interest and riches and said that it was their duty to ensure that all citizens have access to “adequate housing, dignified employment, food, true justice, and effective security, a healthy and peaceful environment.” He also told the nation’s leadership, in the National Palace, that Mexico’s richness lay in its hopeful youth. Half of the Mexican population is made up of young people.

In Morelia, the city where Mexico’s drug wars began, Francis had strong words. He condemned the many drug-related killings and told the clergy not to give in to the “temptation of resignation when faced with violence, corruption, drug-trafficking, disregard for human dignity and indifference in the face of suffering and vulnerability.”

It is clear that Francis sees the drug trade in Mexico – with all the violence, corruption and human trafficking that accompanies it – as a threat to the stability of the country, and especially to Mexico’s young people.

As is customary on papal journeys, Francis visited young people incarcerated in El Cereso prison. He told the prisoners that prisons are an “indication of the kind of society we are.” The Pope went on to say: “We have already lost many decades thinking and believing that everything will be resolved by isolating, separating, incarcerating, and ridding ourselves of problems, believing that these policies really solve problems. We have forgotten to focus on what must truly be our concern: people’s lives; their lives, those of their families, and those who have suffered because of this cycle of violence.”

Francis then spoke about the importance of rehabilitation rather than simply incarceration: “Reintegration or rehabilitation begins by creating a system which we could call social health, that is, a society which seeks not to cause sickness, polluting relationships in neighborhoods, schools, town squares, the streets, homes and in the whole of the social spectrum. A system of social health that endeavors to promote a culture which acts and seeks to prevent those situations and pathways that end in damaging and impairing the social fabric.”

Speaking to the prisoners the Pope advised them to look forward, not backward to the things they had done. He told them to use their remorse “to open the door to the future, to tomorrow,” and to become prophets within their own communities. He said “speak with your loved ones, tell them of your experiences, help them to put an end to this cycle of violence and exclusion.”

On the last day of his visit the Pope made a politically-charged visit to the US/Mexican border. Just days before his visit Donald Trump had said that Francis was “too political”. He paused at the border to pray for migrants who have lost their lives making the perilous journey to the USA. The Pope decried the “human tragedy” that is forced migration which we are now experiencing on a global scale. He said that the world can no longer deny the crisis that has led to millions fleeing poverty and violence all over the world.

Francis also caused a media stir when, on the the plane back to Rome, speaking about the Zika virus sweeping across Latin America, he appeared to be open to birth control to prevent infection. He never said that he would approve contraception to fight the Zika virus specifically but seemed to suggest openness to considering it.

He also said, referring to the migration issue on the US/Mexican border and the solutions proposed by Donald Trump, that building walls to keep people out was unchristian. Trump reacted to this calling the Pope “disgraceful” and said if ISIS attacked the Vatican, Francis would be of a different opinion.

During the hour-long press conference in-flight, Francis reiterated that bishops who move abusive priests around should resign. He said such bishops were “unconscientious men”. He also reiterated the Church’s position on same-sex marriage and suggested that the door is open for divorced and remarried Catholics to receive communion.

He was asked to comment on recent reports that Pope John Paul II was engaged in a deep friendship with a Polish-American woman which was revealed in letters they had exchanged. He said that it was “just that, a friendship”. He said: “The pope, too, has a heart that can have a healthy, holy friendship with a woman.”

Most revealing was what he said to the Mexican bishops during his visit. In one of the longest and most detailed speeches of his papacy Francis laid out the kind of bishop he believes the Church needs today. He, clearly, doesn’t think that all bishops are like this. He said that the Church does not want bishops who are into privilege or political manoeuvres. He then went on to list a number of things he clearly is not happy with. The list was long: proud self-sufficiency, fearing transparency, corruption by material interests, conceited schemes of careerism, empty plans for superiority, hiding and not taking action against social ills, clericalism and triumphalism and self-centredness. “We do not need princes but rather a community of witnesses,” Francis said.

The Pope obviously feels that too many bishops – not just in Mexico –but around the world, have succumbed to these attitudes. He is trying to steer bishops in a different direction to which they have been accustomed. This may be much harder than he thinks.

While Francis was addressing the bishops someone else was talking to the media. Marie Collins was abused by a priest at the age of 13. Today she is a member of the Vatican’s Commission for the Protection of Minors. The Commission was setup by Pope Francis to deal with the scourge of child abuse by clergy and church workers. In an interview with the Irish times she expressed her frustration with how little is being done by the Curia (the Church’s central offices in Rome) to implement proposals made by the Commission and endorsed by the Pope.

She said that within the Roman Curia there was “great resistance” to implementing the proposals. She said that many in the Roman Offices carried on taking no heed of what was being said and that they were “indifferent”. She also told the Irish Times that she was “personally frustrated with the lack of co-operation from the Curia and the fact it can be so detrimental to the work of the commission and the protection of children in the future. That’s where the focus should be.”

The man in charge of sorting out the Vatican Bank, Cardinal George Pell of Australia, refused to go back to Australia to face a Royal Commission Enquiry on abuse. He said he was not well enough to travel. Although the Commission itself seemed to be disorganised it is yet another sign of the resistance that exists in the Roman Curia – Pell is a Curial official. If a high ranking official like Pell refuses to cooperate in enquiries like this, he too discredits the Pope’s vision for leaders who, as he told the Mexicans, should not be afraid of transparency.

The resistance from within the Church is not new. Just a few weeks ago Francis made a minor change to the Church’s liturgy on Holy Thursday when the washing of the feet is re-enacted. Francis change the rubric – that said just men can have their feet washed – to include anyone. This, in many places, has been happening for a long time. In reality Francis was affirming a practice which is widespread. It was revealed recently that Cardinal Robert Sarah from Guinea, who deals with the Church’s liturgy, sat on the Pope’s instruction to change this for a year before he made it public. Another gesture, it seems, of resistance to the Argentine Pope.

Pope Francis has become a world figure and is changing perceptions about the Catholic Church. He has strong views on a number of social justice issues – as we have seen in Mexico just this week – and is never afraid to say what he thinks. He has made clear what kind of leadership he wants the Church to have.

The problem which faces him is not the faithful in the benches. His biggest challenge to reforming the Church will be resistance from bishops – the management of the Church.

Time will tell if the reforms Francis is pushing ahead with will actually make any difference. While many lay-faithful welcome the new lease of life that he has given the Church it remains to be seen if the hierarchy have actually come aboard. Much of the evidence, right now, seems to indicate not. DM