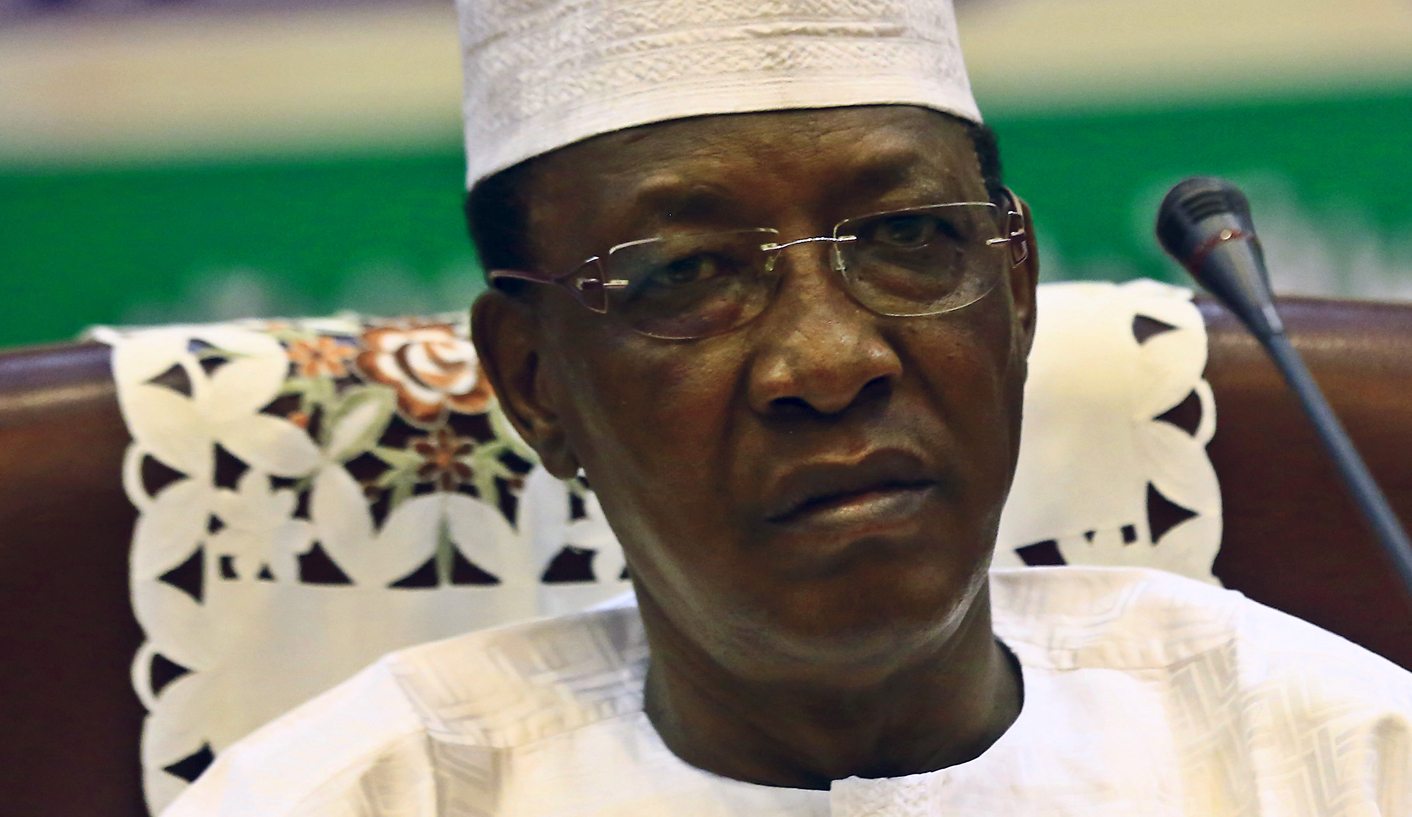 Although he’s been around for a long time - 26 years and counting - Idriss Deby doesn’t enjoy quite the same profile (or notoriety) as other African leaders of his ilk, such as Robert Mugabe or Teodoro Obiang. But a recent push to insert Chad into regional affairs, coupled with Deby’s recent appointment as chairperson of the African Union is changing this perception. By SIMON ALLISON.

Surprise, surprise: Idriss Deby, after more than a quarter of a century as leader of Chad, wants a few more years in the presidential palace. On Tuesday, his party, the Patriotic Salvation Movement, announced that Deby would once again be its presidential candidate in April’s election.

“You have given me the immense honour of renewing in me your confidence by making me your candidate in the 2016 election,” said Deby, as if his nomination was ever in any doubt. An election win – likely given the restrictions on opposition groups – will extend his mandate to 2021. Then, he indicated, he might just be ready to retire.

“The principles of presidential term limits in the constitution must be reintroduced,” said Deby, the man who scrapped those term limits in 2005. Deby argued that times have changed, and – thanks to his excellent leadership – his country is no longer reliant on him to quite the same degree. “Today nothing requires us to remain in a system where changing leaders becomes difficult. In 2005 the constitutional reform was conducted in a context where the life of the nation was in danger.”

Deby came to power in 1990, when he led a military coup which overthrew the brutal dictator Hissene Habre. Habre fled into exile in Senegal, where he is now on trial for war crimes, but it is uncertain whether Deby’s regime has been a major improvement.

As Amnesty International described in its latest annual report: “Serious human rights violations continued to take place with almost total impunity. The rights to freedom of expression and to peaceful assembly were frequently violated. Human rights defenders, journalists and trade unionists were victims of harassment, intimidation, arbitrary arrest and detention. People, including protesters, were killed by members of the security services during demonstrations.”

Deby was accused of war crimes last year. “President Deby personally committed wrongdoing – acts of torture. He personally killed individuals. These are people who were tortured, who were executed, burned alive and thrown to wild animals,” said Mbaye Jacques Ndiaye, the lawyer representing some of the alleged victims.

Nonetheless, so far 2016 has been good to Deby. Not only did he receive his party’s nomination, but he was also chosen unanimously by his fellow African presidents to replace Robert Mugabe as chairperson of the African Union. An enthusiastic Mugabe gave Deby his seal of approval, and even pledged to help. “Whatever support you want from me, I will still be there, until God says come, then I’ll go and join the other angels,” Mugabe said. Thanks, Bob.

At the recently-concluded African Union Summit in Addis Ababa, Deby received a warm ovation as he delivered his opening address. “I accept this task with pleasure, but with a little agony as the responsibility you entrust in me is heavy and fraught with challenges,” he said.

For Deby, the promotion to the continent’s highest office, even if the position is symbolic, is the culmination of a years-long project to transform Chad into a regional heavyweight. For better or worse – and often it has been the latter – Chad’s increasing involvement in regional conflicts has made it a continental superpower.

This was most obvious in Mali in 2013, where Chadian forces played a starring role in defeating the Islamist rebel groups who had occupied the north of the country, and were planning to march on the capital. The Chadian army’s extensive desert fighting experience was key, providing a perfect complement to French airstrikes.

It was also obvious in the Central African Republic, also in 2013, when rebels supported by Chad – sometimes even pictured wearing Chadian uniforms – toppled the government of Francois Bozize, precipitating a civil war which is still unresolved.

“Although the Mali foray was broadly successful, Chad’s attempt to intervene in the Central African Republic was a disaster. Not only were Chadian peacekeeping troops accused of killing at least 30 civilians in a suburb of Bangui in April 2014, bringing sharp criticism from the U.N., but the activities of badly disciplined irregular [Chadian army] troops in the border regions seem to have made the insecurity worse,” concluded journalist Celeste Hicks, an expert on the country, writing in World Politics Review.

Chad is also taking a lead role in two major counter-terrorism operations: the Multinational Joint Task Force, a regional effort to combat Boko Haram, is based in Chad’s capital N’Djamena, as is France’s trans-Sahellian Operation Barkhane.

But while this big push to get involved in the region may be endearing Chad, and Deby, to continental and international partners, it might also be papering over the cracks on the home front. “Chad’s increasingly prominent role on the West and Central African stage in recent years has led many to ask whether the country has in fact put its history of coups, rebellions and chronic instability behind it…Chad may be distinguishing itself on the international stage as a seeming beacon of stability in a troubled neighbourhood, but most ordinary Chadians know how fragile that impression is. They know also that it has come at the cost of democratic accountability and social development for millions,” said Hicks. DM