The African Peer Review Mechanism: An idea whose time has come – again? 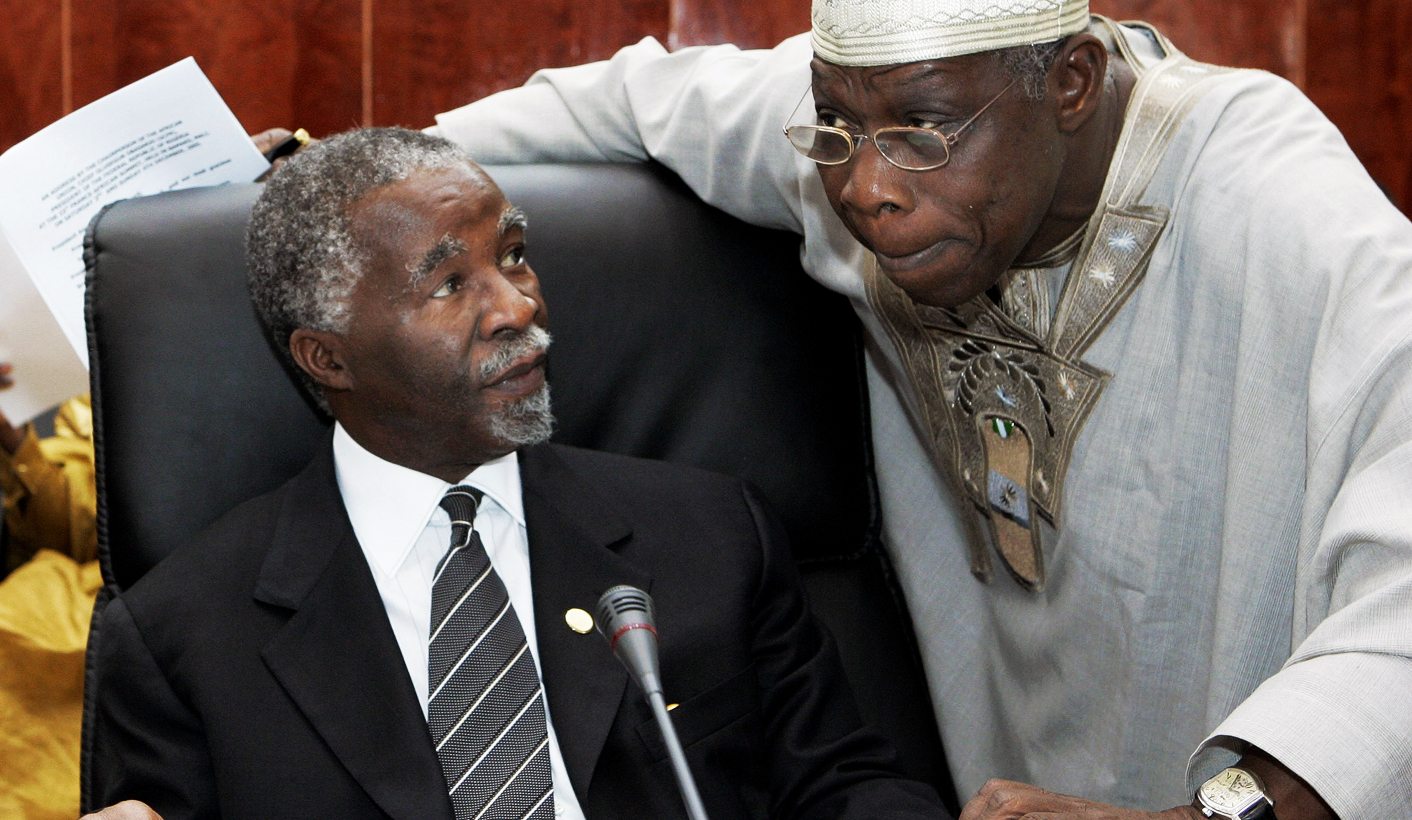 Thabo Mbeki and former Nigerian president Olesegun Obasanjo initiated the APRM in 2003. This system was designed to help the continent’s leaders urge each other to better governance. In its prime, some of the country’s reviews told uncomfortable truths, such as the 2007 one which warned about rise of xenophobia in South Africa. Is it unhip or a cool tool? By CARIEN DU PLESSIS.

African solutions to African problems is a mantra hip as a Che Guevara T-shirt, but the contents of this ideal can feel more revolutionary than a civil servant trying to batho pele -put people first.

Take the African Peer Review Mechanism, which was quite a buzz word amongst governance nerds in the Thabo Mbeki era. But nowadays it’s the president’s alleged aloofness that people remember best.

Yet this issue is far more important than that.

The APRM, a system of peer review for African governments, was supposed to help the continent’s leaders help each other to improve governance – instead of being patronized by the west. It also, perhaps slightly unintentionally, brought civil society organisations onboard to provide input in an era when many African governments would ban them if they could.

Perhaps then it is not surprising that the APRM has been floundering in recent years. In its prime, some of the country’s reviews told uncomfortable truths, such as the 2007 one which warned about xenophobia in South Africa.

Mbeki, who together with former Nigerian president Olesegun Obasanjo initiated the APRM in 2003, responded to this report by saying foreigner hate was alien to South Africans.

Famous last words, because the next year saw a wave of xenophobic attacks on a scale that Mbeki couldn’t have imagined in his worst Polokwane nightmares.

The Kenyan report also correctly predicted the elections-related violence that took place in 2007 and 2008.

So, it seems even though we need political leaders with a political will to drive the APRM, it would be a little optimistic to depend on them alone to drive a tool that makes them feel uncomfortable in their high seats. So, enter the people.

Two civil society organisations – the South African Institute for International Affairs (SAIIA) and the Electoral Institute for a Sustainable Democracy in Africa (EISA) – have been reaching out to grassroots NGOs across Africa in an effort to get people talking about the APRM.

They have also been driving a #ReviveAPRM hashtag on social media, something which has hardly ignited an APRM Arab Spring so far, but which they hope will at least help spread the word a bit.

There is also a Facebook group called #ReviveAPRM with some news and APRM thoughts for those who want to care.

Said SAIIA’s Steven Gruzd: “It’s easy to ignore the voices of a few urban think tanks or NGOs based in South Africa, but if these voices are coming from right across the continent, they are much harder to dismiss.”

Gruzd pointed out that a new book he co-wrote, ‘African Accountability: What Works and What Doesn’t,’ argued that, unless ordinary people and civil society organisations demanded better governance they weren’t likely to get it.

Gruzd said 2016 is do or die for the APRM, which has great potential “as participatory governance assessment tool to improve the lives of citizens.”

But improve how? Gruzd and his colleague Grant Masterson from Eisa in a recent article argue that crises like the Ebola pandemic, intra-state conflicts and the rise of terrorist groups were preventable disasters, because APRM reports had warned about these but governments mostly ignored the warnings.

Even when Ebola broke out, if the worst-hit countries had proper healthcare systems, education and proper rural infrastructure, this would have helped resolved the crisis earlier.

In October 2015, philanthropist Mo Ibrahim warned that Africa’s state of governance has stagnated and wasn’t taking the continent anywhere. Again, if the APRM was used correctly, it could have made a difference by now.

The social media campaign was somewhat overtaken by Kenyan president Uhuru Kenyatta, an APRM action man, who was elected to chair the APR Forum at last year’s AU summit in Johannesburg with grand ideals of reviving the tool. His taste for good PR and his desire to be known on the continent as a great African leader appear to have fueled Kenyatta’s enthusiasm to blow new life into the ailing mechanism.

At a meeting of the APR Forum, comprising heads of state of the 35 APRM member states, Kenyatta said the tool needed to be revived politically and financially.

He called on leaders to “reaffirm our commitment to the purpose, spirit, and values of the APRM and to do all we can to make it something we can call all be proud of”.

He said those countries that haven’t joined yet, should be encouraged to do so, and all should honour their financial obligations to the APRM. ”Let us be the generation that entrenches good governance across our continent for the advancement of our people and future generations,” he said.

The APRM experienced a lull after the last peer review reports – on Zambia and Tanzania – were completed in 2011 and issued in 2013.

The latest report – on Djibouti – was completed after extra funds were solicited from the United Nations Development Programme. The report is expected to be published soon.

Four more country reports are in the offing next year – Sudan, Senegal, Chad and Cote d’Ivoire.

Another boost from the meeting is the appointment of Eddy Maloka, an adviser to International Relations and Cooperation Minister Maite Nkoana-Mashabane and South Africa’s special envoy to the Great Lakes region, and a former academic, as permanent CEO of the APRM secretariat – the first one in eight years.

An attempt a year ago to appoint Nigerian professor Adebayo Olukoshi to the position ended in disaster because his contract wasn’t properly negotiated and he took another job.

So, positive steps, but still a bit of work to be done.

Last week Mustapha Mekideche, chairperson of the APR Panel of Eminent persons told journalists some countries are enthusiastic about the APRM just before their elections because it makes them look good, and then they abandon it after.

Only nine countries are up to date with their $100,000 subscriptions.

So, unhip as the term sounds, the APRM might yet have another shot at becoming a cool tool to help Africa to help itself. DM