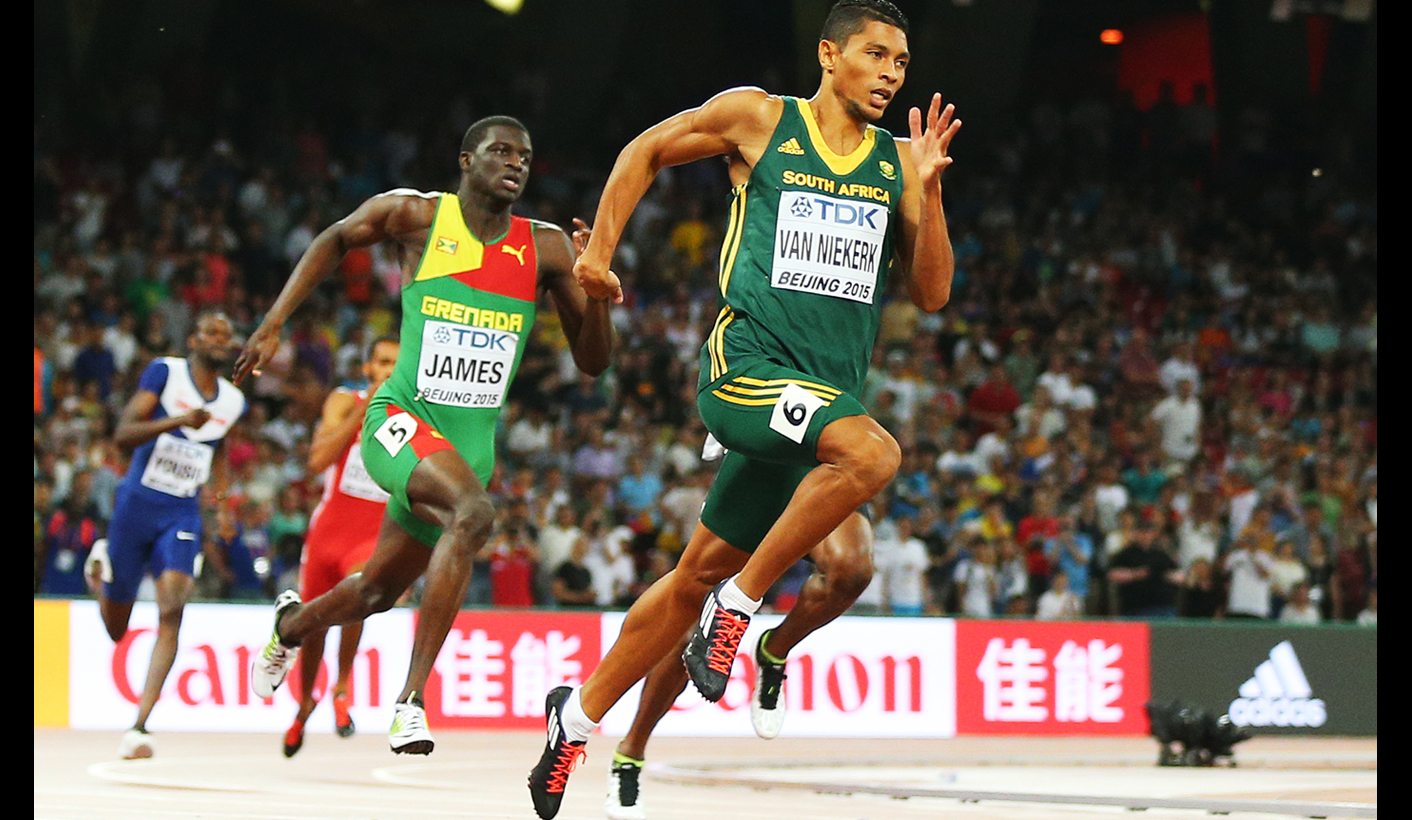 While Wayde van Niekerk has much to prove at next year’s Olympics, 2015 will be remembered as the year when the young South African sprinter announced himself on the world stage. Grounded, talented and proudly South African, Van Niekerk is the kind of sportsperson who offers a better alternative to the harsh and dark realities of every day society. By ANTOINETTE MULLER.

Even when athletics is essentially rotten to its core, with administrators as corrupt as the drug cheats who taint the sport, there is a glimmer of hope, and reason to believe. No matter how dire the state of any sport, there is always one athlete who you simply cannot help but be enchanted by. These men and women are beyond the periphery, immune to the muck, and a beacon of what sporting achievement is meant to resemble.

It is testament to the talent South African sport is blessed with, that it currently has a crop of athletes who have risen above the mess that is Athletics South Africa. Despite their – and Sascoc’s – best attempts to sabotage the careers of young starlets, South African sprinters have spent the year capturing our collective imagination, but none more so than Van Niekerk.

He has come a long way from running in his stepfather’s floral takkies, and no moment this year was more special than when he clinched gold at the IAAF World Championships in Beijing, becoming the first African 400m runner in almost a century to win a title. To sweeten the deal, he ran the sixth fastest time in history, 43,48 sec. His medal was also South Africa’s first global title, and while he looked cool and calm before that gun went off, Van Niekerk said in an interview with City Press that he was a ball of nerves the night before. He lulled himself to sleep by singing the South African anthem.

That might sound like unnecessary patriotism, but athletes like Van Niekerk – those who really love their country and who are not afraid to show it – actually play an important role in South African culture. Sport, for many years, has offered a distraction from reality and those who represent the country at international level with such pride are a world apart from the vile acts of some politicians. Thus, they became the image South Africans like to hold up to the world. When Van Niekerk collapsed at the championships, visibly uncomfortable and taken off on a stretcher, we smiled.

Because Van Niekerk had given everything he could for his country and his sport. This reaction, being almost KO’d by running fast, is something those close to Van Niekerk says actually happens quite often. Whenever he runs a good race, he either ends up in hospital or throwing up. When Van Niekerk was up on the podium, beaming as he received his medal, South Africans smiled and thought: that’s our boy, he’s made us proud.

South Africa’s golden boy is just 23 years old, and if his track performances this year are anything to go by, he could have the world at his feet at next year’s Olympics in Rio. It is a strange thought considering, it was not until 2009 that he had decided to take sprinting seriously. High jump was his thing before he took to running as fast as he can, but when he qualified for the 200m sprint in the World Juniors, his destiny was chosen for him. By 2011, he had made steady progress, and was competing regularly in sprints. However, a hamstring injury would hamper his progress, and lead to fears that he might never compete again.

“In 2011 at our national championships, I tore my hamstring with a grade 1 tear,” he told the IAAF official website. “After that, I kept on getting niggles and scares and it’s taken all of these years (to get back).”

But the young sprinter is not one to give in to setbacks. Through slow training, strength and conditioning and a steady return, he made a full comeback in 2014. He won two silver medals at the Commonwealth Games that year, impressive going for any athlete, but the best was yet to come.

“That was the first year where I’ve been injury free for the whole year,” he says. “It was never consistent, before. I always had a little niggle or a little injury bothering me. 2014 was a very consistent year. Since the South African season I ran more consistent and injury free, so I built a lot of confidence from being able to run without niggles.”

And so, 2015 arrived and Van Niekerk blew everyone away. He calls himself Wayde Dreamer, but dreamers always chase and never get it. If this is Van Niekerk’s idea of dreaming, we can’t wait to see what happens when he gets it. DM