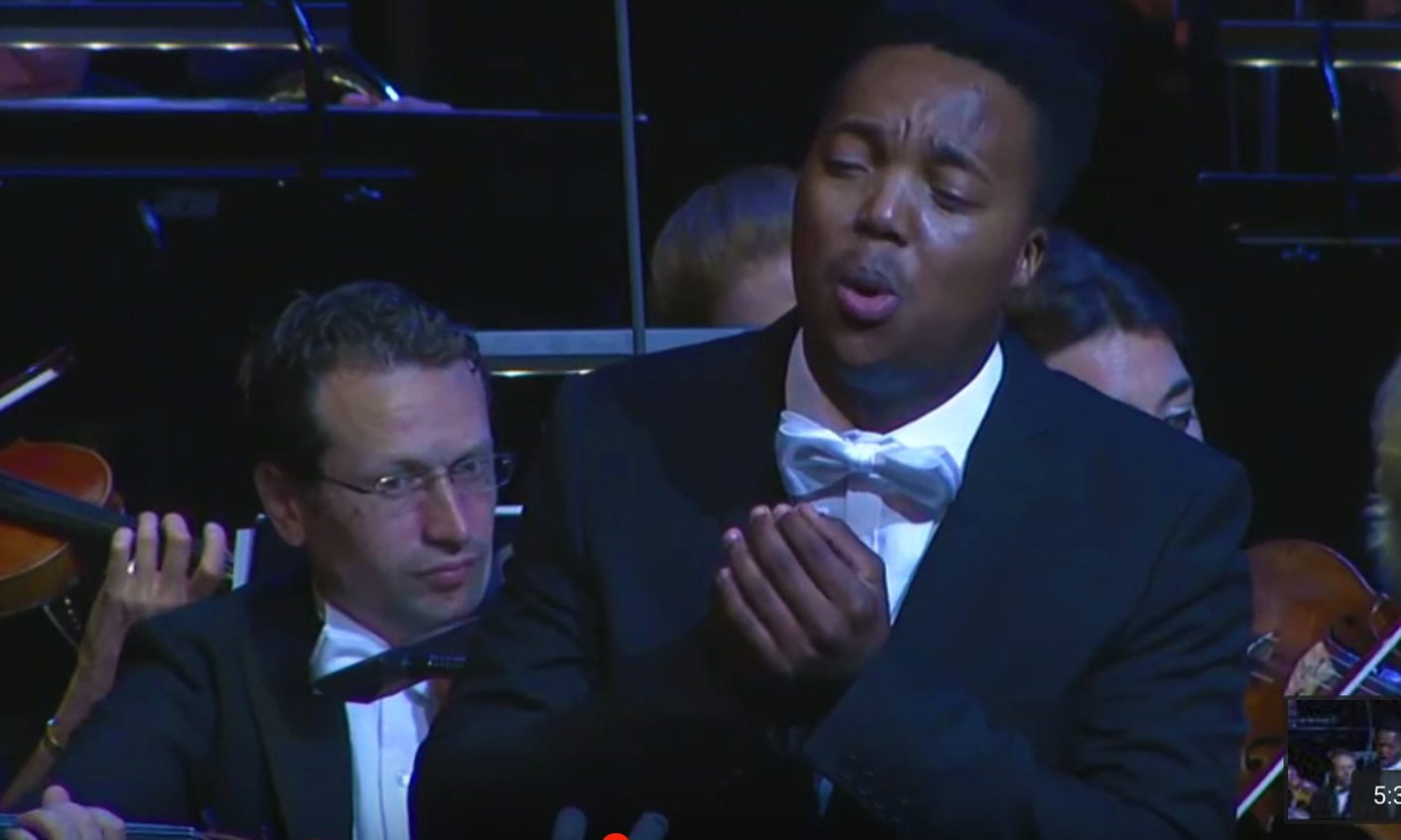 Many say he is the next big thing, and no one is going to argue. YVES VANDERHAEGHEN interviews the sensational South African tenor, Levy Sekgapane, who is enchanting lovers of opera in Europe.

“I’ve got to be great,” says Levy Sekgapane. “These people come for Non più mesta,” the final pyrotechnical aria of Count Almaviva, in Rossini’s Barber of Seville, “and I can’t disappoint them”.

Sekgapane is still flushed from the success of the previous evening’s premiere, in Krefeld, in Germany’s glum Ruhr Valley, where the audience was roused to a boisterously drawn-out standing ovation for the young South African tenor. Germany is home to a third of the opera premieres in the world, and its audiences are notoriously hard to win over.

Sekgapane on the other hand is eager to please. The music critic Shirley Apthorp, who has travelled five hours from Berlin for the show, tells me that Sekgapane delights in putting in all the embellishments, and in holding the hard notes just a little longer than is needed, because he likes to treat his audiences. And as for that aria, I’m told it is often cut, because it’s too difficult for most tenors.

A graduate of the University of Cape Town Opera School, Sekgapane is clearly up for it, and it’s paying off with a string of awards. He says that winning the Mimi Coertse Singing Competition, in 2013, gave him the confidence to believe he could make it on the world stage. This year he won the Belvedere singing competition in Amsterdam, in which three of the new wave of South African singers were finalists, the Montserrat Caballé competition in Spain, and the Southern African Music Rights Organisation’s Best Western Art Music singer prize.

The boy from Kroonstad wears his laurels lightly, as he orders a chicken wrap in the Grill Pallast restaurant, near the Krefeld station, as we chat. “No spices,” he tells the waitress. “Gives me reflux,” he says, “and that’s not good for my throat”.

The post-premiere celebrations carried on into the early hours. It is now Sunday afternoon, and Sekgapane’s looking fresh. Celebrations are a muted affair for him. He does not drink or smoke. Yes, he used to enjoy a few beers during his rugby-playing days at university, but in his fourth year he decided it was not doing his voice any good, and he has not had a drink since then. It is all about discipline, he says. “Talent takes you only so far. The rest is very hard work.”

And keeping in shape physically is crucial. Sekgapane is sporty, so he enjoys keeping fit. He played first team hockey and rugby at Stellenberg High School in Cape Town, where he was a boarder, and he had dreams of playing fullback for the Springboks. “But I’m too small,” he says. A Kaizer Chiefs supporter, he enjoyed soccer too, but it was not offered at school, where only rugby mattered. Now he keeps fit from gym, and a bit of cycling, and he’s taken some tennis lessons for good measure. “It helps for balance and co-ordination in performance.”

There it is again, the single-minded discipline. Sekgapane wants to be the best, and apart from the brief Springbok dream, it was always going to be music. For most of his early life, he was set on becoming a concert pianist. His uncle, a conductor with the Johannesburg Philharmonic Orchestra, thought his voice had the greater potential. He persevered with the piano, although he continued to sing in choirs, but in his second year at university he had to accept that his voice had outstripped his piano skills, and that his career lay, beyond doubt, in opera. And with it, the sacrifices. Cutting off his dreadlocks in June is the least of it: “I can’t do Rossini with dreads; it doesn’t fit.”

There is the fun part. He gets to travel, which he loves. Ever the cosmopolitan, this lover of baroque, and Bach, especially, is thrilled to be able to observe, in Barcelona, “Ah, the Spanish do this,” or in Dresden (where he has a three-year scholarship) “Ah, the Germans do this”. It is in Barcelona that he wants to buy a house, “when I’m rich”. I ask why: “Ahhhh, the weather”. Snow’s fine, “I love it”, but Barcelona has sun “like nowhere else”.

But as Apthorp says when I speak to her about Sekgapane’s rise to fame, there is a flipside. “Succeeding as an opera singer is a lot less glamorous than it sounds … You have to want it more than anything else, because the price is so high; you’re basically opting for a future lived in hotel rooms, and you are giving up home, stability, family, and personal relationships. I have friends in that world who are lucky if they get two weeks at home each year, and I can’t tell you how many broken marriages I have seen.  Sure, some stars end up in relationships or with families, but because of the endless travel, it is a great deal harder for them than for ‘normal’ people. You need a single-minded passion for the music itself, and Levy has that.”

Sekgapane has no illusions about this, but he’s got everything under control. He is only 25, but says “I’ve planned out everything myself. I know where I want to be, and I know what I need to do.” He will do Rossini for another 15 years or so, while he’s young. “Then some more French bel canto to preserve my voice for a bit longer, and then I will take on Verdi, who really pushes the voice.” He considers himself lucky that he is not being pushed beyond his limits by either his agents, or his mentor, the South African director (himself a tenor) Kobie van Rensburg, who also directed the Krefeld performance.

“So many singers have broken their voices by pushing too hard too fast,” says Sekgapane. Apthorp notes that his strength is that “he has a hunger for knowledge, and he learns fast. You have to be able to take criticism (and for a singer, everything is personal, because your instrument is your own body and soul), and to work constantly on self-improvement. These are the things that have taken Levy from the place of promising student in Cape Town, to the place of promising young winner on the international vocal scene.”

There are also things that keep him grounded. One, he says, is his faith. “I take on only what the Lord brings my way”. Another is that he nurtures the Sotho in himself. “I get to speak Sotho on the phone to my brother, and that’s important …. as you know, you can take the man out of the ’hood but you can’t take the ’hood out of the man.” And when he gets to setting up his flat in Dresden, he is looking forward to getting channel TV, to pick up South African programmes, “especially Generations and Isidingo”.

All this, he feels, keeps him true to himself. And that’s very important. What he values most, apart from loyalty, is “to be as honest as possible. Be true. Always tell people who you are, so that they know ‘he’s honest, he’s natural’.” In the same vein, when talking about the promising singers coming out of South Africa, he says “they have to use what they have, and be proud. We are not proud enough of what we have, and the country is losing good people”.

And so, as we part on the train taking him back home from Krefeld, I ask if we will be seeing him in South Africa. “It would be nice,” he says, “but I don’t think they’ll be able to afford me.”

Music critic Shirley Apthorp, reviewing the Krefeld production of Rossini’s Barber of Seville in the Financial Times of London, wrote: “It is not the first opera production to merge the worlds of cinema fantasy and opera with the aid of blue screen technology and projection. But it is both new in Germany, and significant as the world’s first low-budget blue screen opera.”

“With the aid of just two consumer video cameras, several tins of blue paint, a cheesy 1960s aesthetic, many solo hours at his laptop, and a fevered imagination, director Kobie van Rensburg has created a “Barbiere” for the multi-tasking generation, raucous, bold, and teeming with action on multiple levels. A double screen above the stage gives us cinematic close-ups of the characters and creates a magical universe of rooms and objects that are not really there. Gauzes dropped behind or in front of the action allow projections onto the stage itself.”

“This kind of work calls for a new generation of performers, agile singers who can think ahead, sing to the camera, and still hit their high notes.”

“The evening draws much of its sparkle from young South African tenor, Levy Sekgapane, [who] has the nonchalance of a young Juan Diego Florez, an ability not only to deliver both fiendish coloratura and stratospheric high notes flawlessly, but also to give every appearance of enjoying himself in the process. As the evening progresses, this becomes a sock-it-to-them glee that sends the audience wild. Add solid musical intelligence and diction rich in communicative nuance, and you have the charisma of a star in the making.” DM