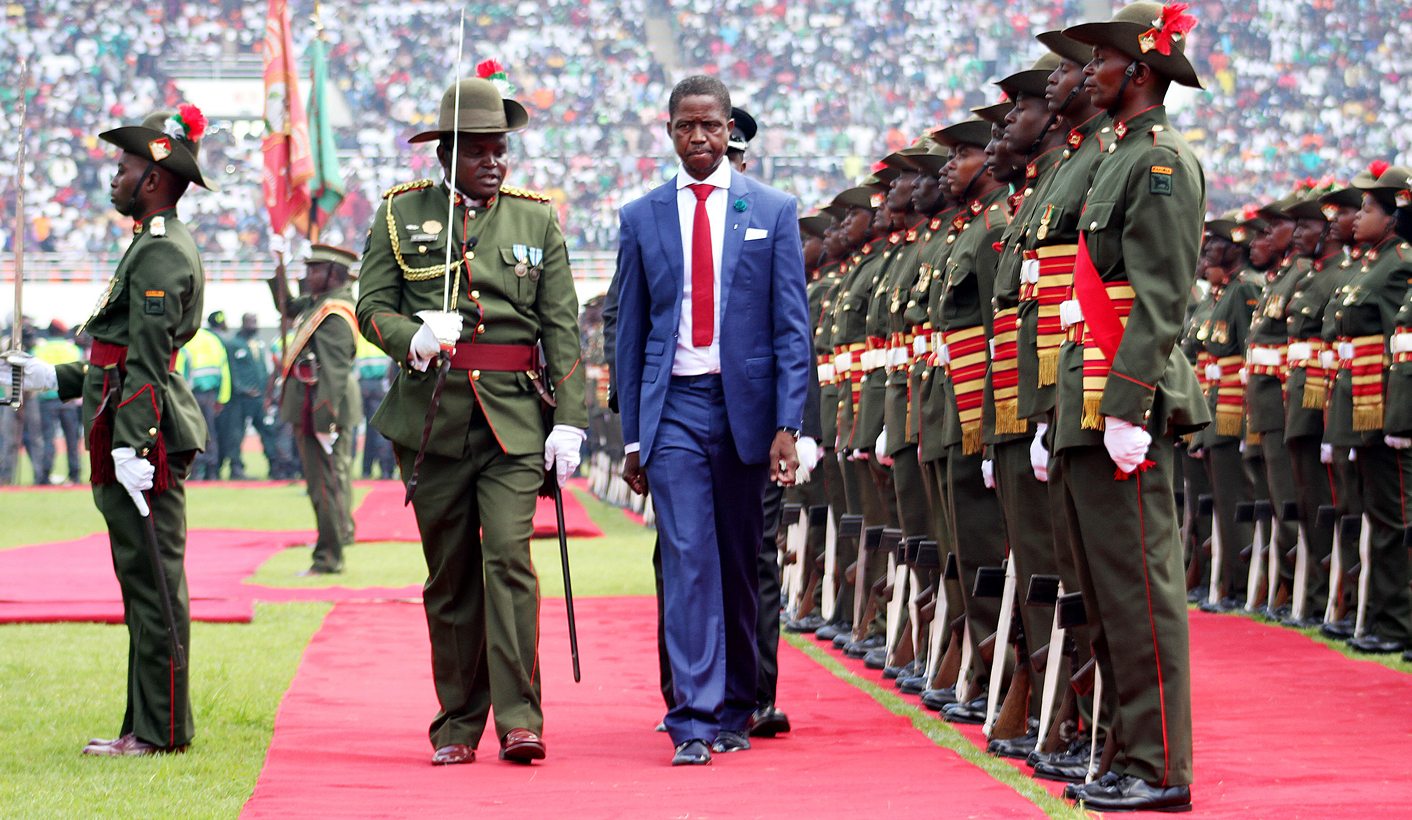 Much has changed in Zambia in the last 25 years. But amid all the change, the country's recent economic travails show just how much has remained the same. The economy is still dependent on copper, accounting for more than 70% of its export income, and thus vulnerable to price swings. As a result of the current commodity downturn, the kwacha has fallen by more than a quarter of its value this year. By GREG MILLS.

Twenty-five years ago the Zambian regime was in its death throes. In the face of rioting, food shortages and an attempted coup, President Kenneth Kaunda agreed to drop the one-party state. The country’s first multi-party elections for parliament and the presidency since the 1960s were held on 31 October 1991. The opposition Movement for Multiparty Democracy candidate Frederick Chiluba thumped Kaunda and his United National Independence Party, gaining 76% of the vote.

Zambians had tired of Kaunda’s statist inefficiencies, which had seen debt levels rise above $7-billion, at the time the highest debt-per-capita level worldwide, and copper production, on which its foreign earnings were almost totally dependent, drop to a third of their 1972 peak of 720,000 tons.

Although the population had doubled to 8-million during Kaunda’s 27 years in office, employment had scarcely risen, from 300,000 to just 450,000. It is estimated that the cost of nationalisation of the mines, among other assets including agriculture and even buses and taxis, which occurred from the late 1960, was in the region of $50-billion. A 2013 Eunomix study calculates that Zambia would have generated mineral rents totalling $65-billion if it had continued to produce at an annual rate of 700,000 tonnes over the 40-year period from 1970. Instead it managed only $15-billion. The ‘opportunity loss’ exceeded the international aid it received over the period.

Today Zambia is a different place. In 1983 I drove from Lusaka down the Great East Road to Malawi. There was scarcely a car in sight, save the odd Peugeot 404 or Land Rover, and no petrol station open along the entire route.

The same road out of Lusaka today is clogged with traffic, mostly $3,000 second-hand Japanese imports. Petrol stations dot the intersections, as do billboards for everything from bottled water to banks. Thirty years ago one would have to queue for maize bread, and wait patiently to be informed when a Coca-Cola shipment was in the shops, which were often small, family-run affairs.

Now the big, mostly South African, stores are on full display. Where there were just one or two hotels for the business traveller in the capital, now one is spoilt for choice from international brands. And where one had little option as to where to bank traveller’s cheques 30 years ago, every major bank, African and global, seems to be represented.

Amid all the change, Zambia’s recent economic travails show, however, just how much has remained the same. The economy is still dependent on copper, accounting for more than 70% of its export income, and thus vulnerable to price swings.

As a result of the current commodity downturn the kwacha has fallen by more than a quarter of its value this year, breaking through the ten kwacha-to-the-dollar mark; this is after the government lopped off three zeroes two years ago, making it currently the worst performing currency worldwide. In 1983 the (admittedly pegged) currency was virtually at parity with the greenback. This slide would matter less if Zambia had stuff to make and export with which it could take advantage of the weakening exchange rate.

Now debt, from which Zambia was relieved just 10 years ago, has cruised through the $5-billion mark and is climbing remorselessly as the government desperately seeks ways to defend the kwacha (it spent $120-million on this fruitless exercise this month), and fund its civil servants, their salaries now consuming about half the budget. Much of the remainder goes on debt interest payments. To add insult to injury, load-shedding is increasingly frequent as the water level in the Kariba Dam declines along with delays in commissioning new power projects.

Now things have reached a crisis point with the suspension of two major mining operations, Glencore’s Mopani and CNMC’s Luanshya, together responsible for around a third of the country’s copper output and employing more than 10,000 workers. There are worrying signs that other producers might also follow suit.

In the current circumstances the country’s budget spending deficit could reach 14%, three times higher than the original estimate. The repayments on Zambia’s latest bonds offer a yield of nearly 10%, reflecting a lack of investor confidence.

The government’s response is so far predictable. While placing the blame on “external factors beyond our control”, the presidency has called for “all Zambians irrespective of political affiliation or any other interests to unite and come together so that we as a nation can pull through these challenges”.

President Edgar Lungu has also stated that he would provide “comprehensive direction to the nation on short- and medium-term interventions to cut costs, diversify the economy and reduce the nation’s dependency on copper and hydro power”.

First, reform only when under pressure to do so. When the economy was flat on its back in the early 1990s, it sold off 260 state-owned enterprises. In offloading the mines (which were losing $1-million dollars a day by the late 1980s) the government had to put in place attractive conditions, including those around taxation. When the copper price rose in the 2000s, and these investors started to make money, the government changed its tune, attempting to implement a windfall tax which would have made some mines unprofitable. That was followed by an equally misguided royalties’ tax, which the government was forced to back away from earlier this year. Now, when the copper price is down again, the government has desperately implored companies not to close.

Second, even when economic growth rates have been high, such as between 2005-13, when it averaged more than 6% annually driven by the high copper price and improved production efficiencies, this has not translated into growth in jobs or significant poverty reduction. Today there are little more than 500,000 formal jobs, despite the population being more than 14-million. Sixty percent of Zambians still live below the poverty line, and the absolute number of poor has increased from about 6-million in 1991 to 7.9-million in 2010, with a notable difference between the urban areas (where around a third live in poverty) and the rural sector (over 70%).

Third, this relates to a consistent government habit not to diversify during the good times, and make prudent investments in the productive sector, but rather to redistribute to its constituents. As one measure, there are more than 50 ministers and deputies among the 158 MPs. Despite the presence of Vision 2030 and a National Development Plan spouting “broad-based wealth and job creation through citizenry participation and technological advancement”, the government has stuck to what it knows best – squeezing the mines as hard as they will tolerate, even changing the terms of investment.

And fourth, this relates, in the words of one former cabinet minister who served three leaders, to a presidential habit of centralising power – “like a traditional chief’, as he put it – and taking every decision. It’s an environment where rent-seeking is pervasive, both to get ahead and to fund elections.

To get out of its vulnerability rut, a fresh-thinking Zambian government would fundamentally have to, at last, match the routine diversification rhetoric with a policy reality. To reduce dependency, for example, on mining exports, it would have to make it easier to invest (and run) agriculture and tourism businesses, rather than the current permit-heavy environment. It would have to make it easier and cheaper to move things in and out of the country, not only by road, but also by rail, opening up existing assets to investors. And it would have to offer stability and certainty to investors, in the good times as well as the bad. DM

Dr Mills heads the Brenthurst Foundation, and has been in Zambia.