What we can learn from the greatest upset in Rugby Worl... 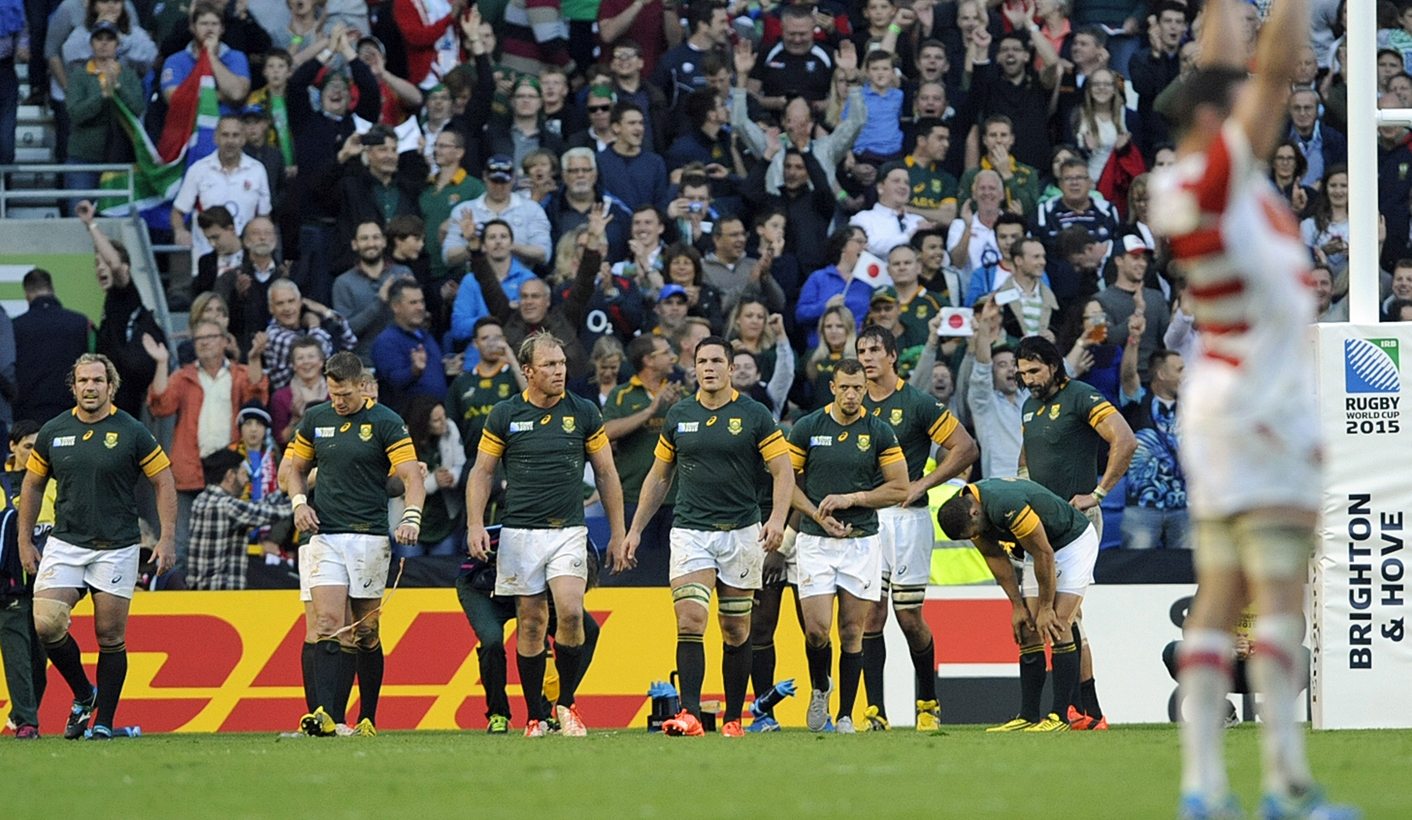 If you’re a Springbok fan, you’ll most likely have awoken to the realisation that the loss to Japan was not the cruel dreamland manifestation of one too many klippies and coke. It’s easy to despair when the biggest upset in World Cup and Springbok history has just occurred, but before you go reaching for those Prozac pills take a minute to consider the many positives from the game. By STYLI CHARALAMBOUS.

Just two days into #RWC15 and already the tournament could be billed as the “Minnows Strike Back”. The opening game on Friday night saw the English gingerly overcome a resilient and bruising Fiji team, with a final score of 35 -11 that flattered the hosts, off the back of two late tries. Georgia held out 19 -10 over the more fancied Tongans, and of course THAT 34-32 loss by the Boks to the Brave Blossoms of Japan. These underdog upsets are what make World Cup formats great, and the game is in a better place than days of old when the only uncertainty was the size of the winning margin by the bigger unions. The Cricket World Cup, for example, will be worse off for not allowing the smaller countries to participate alongside the bigger members in the next iteration of the event.

Twenty years ago, in the Rugby World Cup hosted by South Africa, the All Blacks annihilated the Japanese team 145-17, in a then record losing margin for any World Cup match. For Japan, a country with such a proud history and a history for taking pride in their work to extreme levels, it could have been all too easy to bow out and concede the desire to play with the big boys. Instead, with a long investment horizon, they persevered. Choosing rather to build the game up further despite the overwhelming popularity of baseball and golf, Japanese invested in their professional league and the drive to attract new talent. So to call the Asian powerhouse of rugby minnows, would actually be a disservice to them and the brand of rugby they put on display last night.

Another takeaway from the embers of this loss is recognising the value a good coach can bring to the team. Not exactly ground-breaking in itself, but to see the magic a rugby brain like Eddie Jones can bring to a team allowing it to go toe-to-toe with goliaths of the game, will warm the heart of any purist. Watching the Brave Blossoms launching into tackles, and running into gaps so reminiscent of the Australian sides that plagued us in the Tri-Nations and Super Rugby, showed the muscle between a rugby players ears counts just as much if not more than ones stretching his jersey.

The one group of South African rugby supporters who will take an inkling of pleasure from yesterday’s loss are the Stormers fans hoping Mr Jones can play a repeat song of success with the Western Cape franchise, bringing with him a brand of intelligent play that has so often been absent from our rugby over the years.

But perhaps the biggest positive that will come from Saturday’s defeat is that it could lead to an overhaul of coaching personnel for the Springbok team. Die Burger had previously reported that Heyneke Meyer has already been secretly appointed to carry on until 2019, and with the pressures around the poor record of transformation set to intensify on the back of this loss, it seems the “brains-trust” may need to do what has never been done before in order to win the public vote, and win the tournament after an opening match loss. (England came close in 2007, reaching the final after a 36-0 thumping by the Springboks, but on the basis of yesterday’s performance and the months leading up to yesterday’s performance, even reaching the final would be a minor miracle.)

The appointment of Meyer after the 2011 RWC loss came a full six months after New Zealand had already appointed Steve Hansen. It took Meyer a further two-months to negotiate the buyout of the “world renowned” Blue Bulls coaches of Ricardo Loubscher and Johann van Graan, incidentally around the same time Eddie Jones was looking for work. All of which was unnecessarily wasted time and money.

It’s clear the Springboks need some fresh thinking in the coaching mix, and SARU would do well to recognise that New Zealand coaches took 3 out of the 4 teams to the 2011 semi-finals. They may have something to offer a team who look like the ability to adapt to the changing pressures of a game has been drilled out of them. SARU would also do well to mimic the Kiwi approach to hiring assistant coaches, requiring them to be the level of international head coach quality, something Graham Henry had the foresight to see in Steve Hansen and Wayne Smith and works wonders for succession planning.

They say one should never let a good crisis go to waste. If you don’t believe Springbok rugby is in crisis, one only needs to view exhibit A – four losses in the last five matches, including Argentina and Japan. Hopefully the powers that be will use the time reflect on the value a foreign coach can bring to the Springbok coaching setup, even if just in the form of a capable assistant. DM