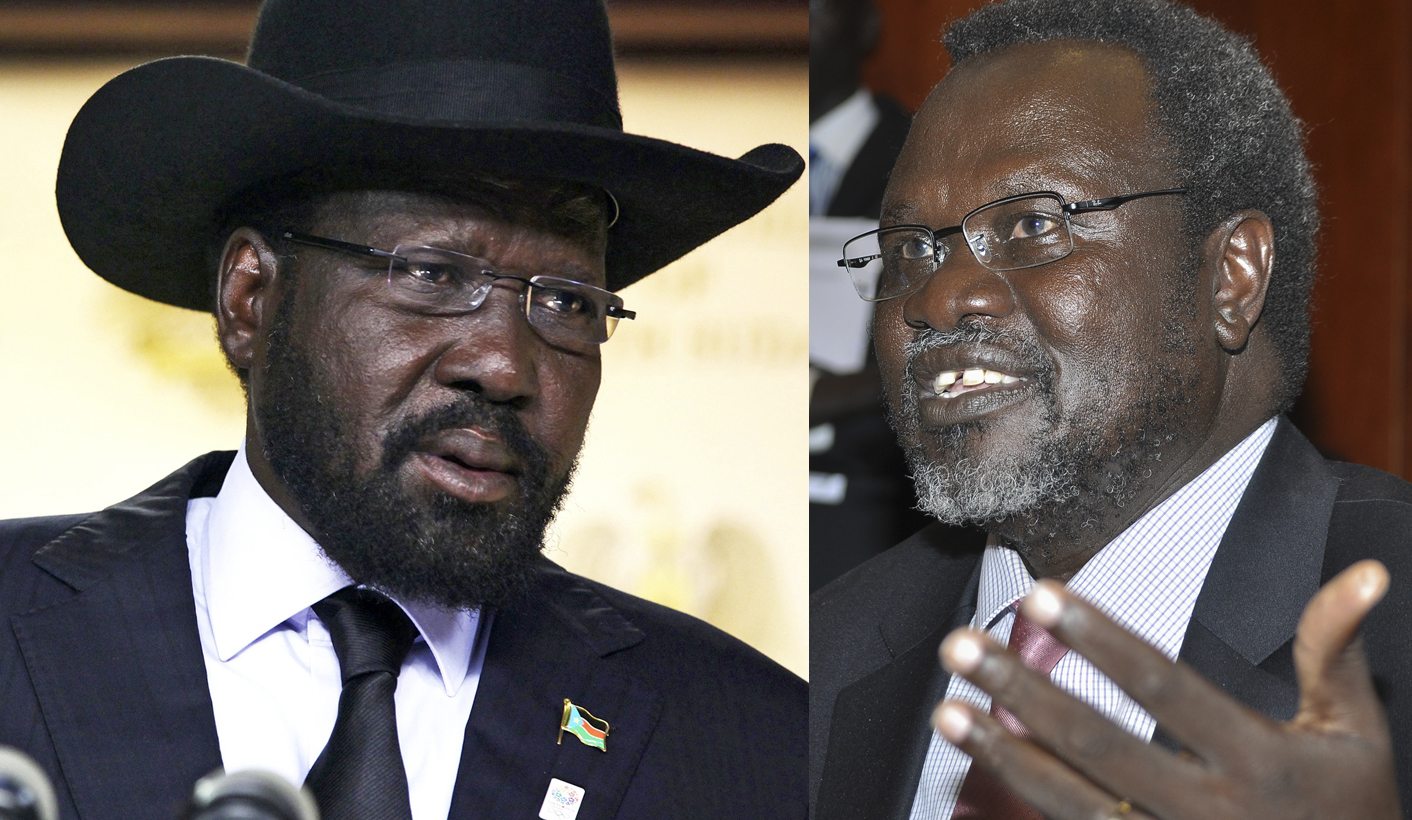 The ultimatum was issued, and the deadline is here, but South Sudan’s warring parties seem no closer to reaching an agreement. And even if they do – well, no leader in that troubled country has a good track record of following through on their commitments. The best we can hope for is small steps in the right direction, to lay the groundwork for the inevitable next round of talks. By SIMON ALLISON.

Usually, peace deals work – that is, they stop the war – when one of the negotiating parties is much stronger than the others. Think of the Treaty of Versailles, where an utterly defeated Germany had no choice but to sign whatever deal was put in front of it (of course, students of World War II know exactly how that turned out). Negotiations between equals are far more complicated, and less likely to succeed.

It’s in this context that any assessment of the ongoing South Sudanese peace talks must be considered. No one expects any deal in Addis Ababa to end the war, or that either side will stick to the terms of the deal. The goal here is much more modest: simply to move the goalposts a little bit further forward, to bring the sides slightly closer together so as to mitigate the very worst consequences of the war – and to lay the groundwork for the inevitable next round of peace talks.

But despite these modest aims, things don’t look particularly encouraging. Despite a strong presence from the international community – the talks are hosted by the Intergovernmental Authority for Development (IGAD), a regional body, with representatives from the African Union (including South Africa), the United Nations, US, European Union and China – the talks are going round in circles.

No progress has been made on the key issues, which include: the proposed demilitarisation of the capital, Juba; power-sharing formulae for national and local governments; the introduction of a more federal system of government; and the length of the transition and disarmament period.

Complicating things further are divisions within the rebel movement, which is far from united under Riek Machar’s leadership. Last week, two opposition generals issued a withering assessment of Machar’s abilities as a leader, and said they would not recognise any agreement reached by Machar and Kiir.

Hopes of a deal are dwindling, which presents the international community with a crisis of legitimacy.

In his address to the African Union (AU) in July, US President Barack Obama issued an ultimatum. “In South Sudan, the joy of independence has descended into the despair of violence. Neither Salva Kiir nor Riek Machar have shown any interest in sparing their people from this suffering or in reaching a political solution. Yesterday, I met with leaders from this region. We agree that, given the urgency of the situation, (South Sudanese President) Salva Kiir and (rebel leader) Riek Machar must reach an agreement by August 17. If they do not, I believe the international community must raise the costs of their intransigence. And the world awaits the report of the AU commission of inquiry, because accountability for atrocities must be part of any lasting peace in Africa’s youngest nation.”

In other words: if South Sudan’s leaders don’t sign a peace deal by the end of Monday, there will be consequences. But what exactly are these consequences? And who will enforce them?

This has been the subject of fevered debate in diplomatic circles in Addis Ababa as hopes for a successful outcome dwindle.

The most obvious consequence, and the easiest to enforce, is an expansion of targeted sanctions against key figures in both the government and the rebel movement. Already, the United Nations has imposed a travel ban and an asset freeze on six generals – three from each side of the conflict – but this number is likely to increase. Kiir and Machar may even be targeted.

Another possible consequence is to finally – more than six months after its submission – release that report of the AU commission of inquiry mentioned by Obama. Although its contents have not been officially made public, leaks suggest its findings are damning, and may serve to discredit the leadership of both sides.

Neither of these options, however, represent particularly big sticks, and they are unlikely to scare the belligerents. A more forceful option – such as an international intervention of some description – is not really on the cards. It’s simply too expensive, and there is little appetite to commit troops and resources to what is almost certain to be a long, drawn-out campaign.

This context should help to explain why, despite the ultimatum, South Sudan’s warring parties seem no closer to signing a meaningful peace deal than they have been over the last 18 months of talks. Unless something changes drastically, the ultimatum is an empty threat – meaning there will be no immediate relief for the estimated 2-million people displaced by the conflict, or justice and accountability for the estimated 10,000 deaths.

“Enough is enough. It is frustration and hopelessness that is reigning in South Sudan and all over the world. There is no other chance,” lead mediator Seyoum Mesfin said  on the eve of the talks. He’s right – but that doesn’t make him any more likely to succeed. DM

South Sudan: Obstacles to a lasting peace on BBC