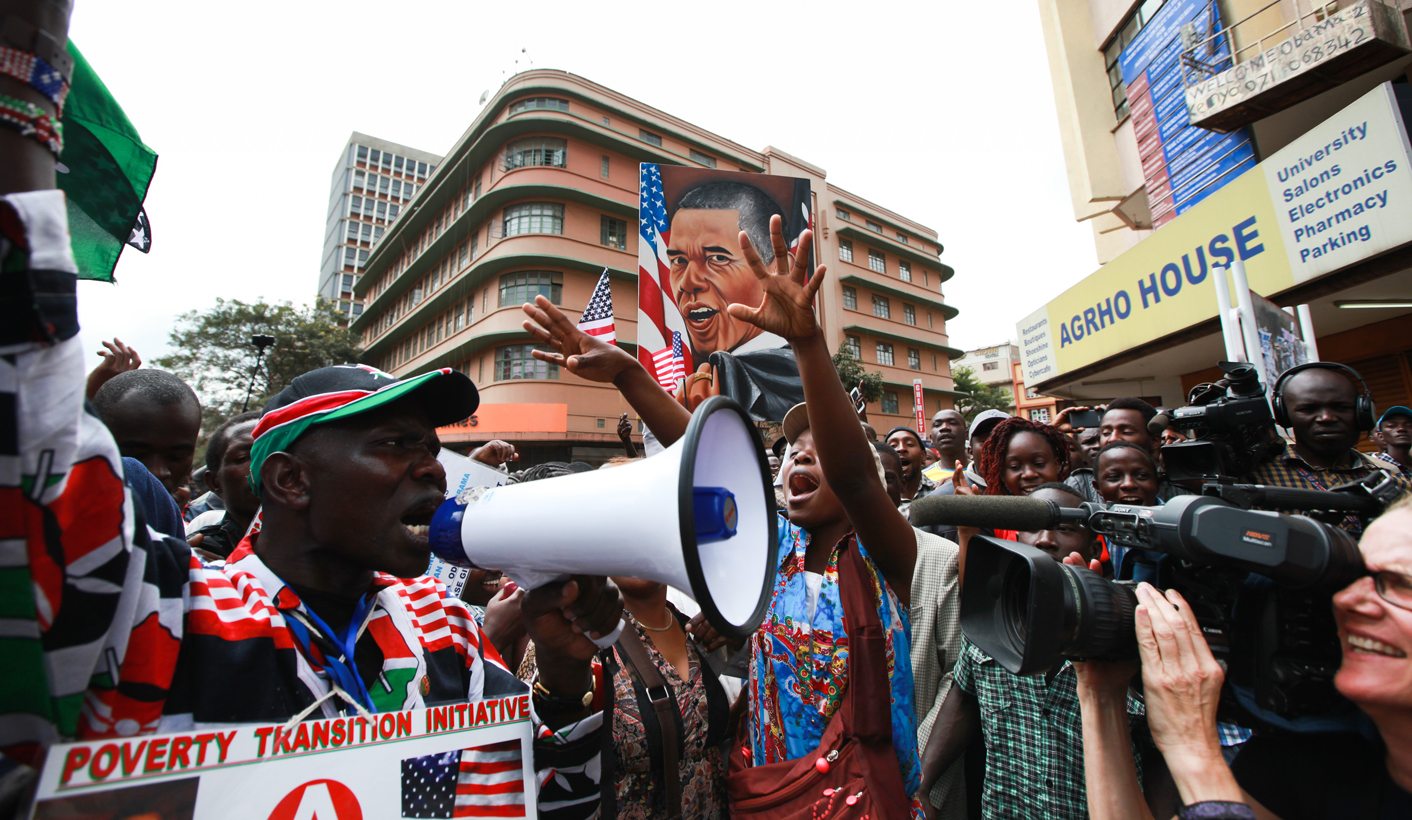 In most places on the African continent, American aircraft are more likely to deliver drone strikes than presidents. This week, at least, things are different, as Barack Obama landed in Kenya with an arsenal of truth bombs and the courage to drop them. He’s already shamed Uhuru Kenyatta on the gay rights issue, and told Africans that some traditions are best forgotten. As he heads to Addis Ababa, can he maintain this unexpectedly undiplomatic momentum? And will he turn that critical lens on himself? By SIMON ALLISON.

Obama may or may not be the most powerful man in the world, but there’s no doubt he’s treated as if he is. Who else can effectively shut down two of Africa’s biggest cities? Who else can convince the world’s media to descend on first Nairobi, and then Addis Ababa, to cover a few set-piece speeches and a press conference, when wars and famine are rarely a strong enough pull? Why else do we hang on to his every word, looking for meaning and substance and, above all, validation?

Of course, we know this trip is special. After all these years, Obama is finally coming home, returning as president to his Kenyan family and roots. The timing is significant: Obama is running out of time, with just 18 months left in office, to make this symbolic trip; and it is only now, with the dismissal of war crimes charges against Kenyan President Uhuru Kenyatta earlier this year, is he able to risk being seen with Kenya’s political elite. Before this, Kenya was simply too toxic.

But anyone who thought that this was merely some valedictory tour, an African swansong as Obama winds down his presidency, have been surprised: so far, Obama has come out swinging.

First, it was the gay rights issue. “As an African-American in the United States, I am painfully aware of the history of what happens when people are treated differently under the law … The state should not discriminate against people based on their sexual orientation,” said Obama on Saturday. He was speaking next to Kenyatta at the time, who was nonplussed: he’s not used to being chastised in public, and a chastisement it certainly is: Kenya is one of 36 African states where being gay is illegal.

“For Kenyans today, the issue of gay rights is really a non-issue. We want to focus on other areas that are day-to-day living for our people,” the Kenyan president responded.

But Obama wasn’t finished. On Sunday, he took a strong stand in support of women’s rights and gender issues. In itself, this isn’t a controversial stance: the African Union (AU) has been vocal in promoting the same (‘Women empowerment’ was among the themes of the most recent AU summit in Johannesburg). Obama took things a step further, however, telling Africans that they’re going to have to get rid of some of their traditions if they’re going to make real progress on this issue.

“Every country and every culture has traditions that are unique and help make that country what it is, but just because something is part of your past doesn’t make it right, it doesn’t mean it defines your future … Around the world there is a tradition of oppressing women and treating them differently and not giving them the same opportunities, and husbands beating their wives, and children not being sent to school. Those are traditions. Treating women and girls as second-class citizens. Those are bad traditions: they need to change.”

Obama highlighted sexual abuse and domestic violence and female genital mutilation as traditions that urgently need to change. “These traditions may go back centuries; they have no place in the 21st century. They are issues of right and wrong in any culture.” Strong words, made all the stronger by the fact that Obama tackled what he sees as the root of the problem: obsolete cultural practices in some African societies that few dare criticise.

But Obama is in a unique position to do so: with a claim on African culture himself, he’s both an insider and an outsider, and this will give his critique far greater reach – and, possibly, impact – than if the very same words were uttered by David Cameron or George W Bush. It also makes it difficult for some African leaders to respond with their usual defences: no one can play the race card against Obama, and the neo-colonialist card is tricky too.

As Obama now heads to Addis Ababa, the home of the AU, it is worth saluting him for the courage he’s shown in raising these tough, sensitive issues – and we can probably expect more of the same. But if he wants this African visit to be truly momentous, perhaps he should turn that critical lens onto his own administration, and explain some of the decisions that seem to contradict his noble vision for Africa.

Why, for instance, does the US continue to fight the war against Al-Shabaab in Somalia by proxy, swelling the coffers of leaders like Burundi’s Pierre Nkurunziza and Uganda’s Yoweri Museveni (a noted homophobe) in the process? It can be argued that the current crisis in Burundi has its roots in this relationship.

Or why did US negotiators fight vociferously to prevent the creation of a representative tax body at the Financing for Development Conference earlier this month? By doing so, they prevented African countries from taking charge of their own tax revenue, and kept them hooked up to the life-support of foreign aid – which will never be enough, as all conference participants acknowledged, to drag the least developed countries out of poverty.

A final question, although there are plenty more where these came from: why does Obama’s administration continue to resist meaningful attempts to prevent or mitigate climate change? Many African countries will be the first to suffer – even though Africa did not cause this problem.

Obama’s leadership on gay and women’s rights in Africa is welcomed. But unless he accounts for his own faults too, it’s hard not to wonder whether his strong words serve merely to divert attention from other questions that he’d rather not answer. DM

Photo: Kenyan people gather to witness US President Barrack Obama (not pictured) as he visits the August 7th Memorial Park in Nairobi, Kenya, 25 July 2015. Obama laid a wreath in commemoration of those who died in the 1998 bombing of the US Embassy in Nairobi. Obama is on his three day visit to the country, his first visit to his father’s homeland since becoming president. He promoted Africa as a hub for global economic growth during a four-day state visit to Kenya and Ethiopia to address terrorism, economic recovery and human rights. EPA/DANIEL IRUNGU

Why journalism matters. The challenges have changed, but has its core purpose?

Speaking truth to power: A free press is the lifeblood of democracy