Ryder on the Storm: MTN-Qhubeka’s honcho gets candid 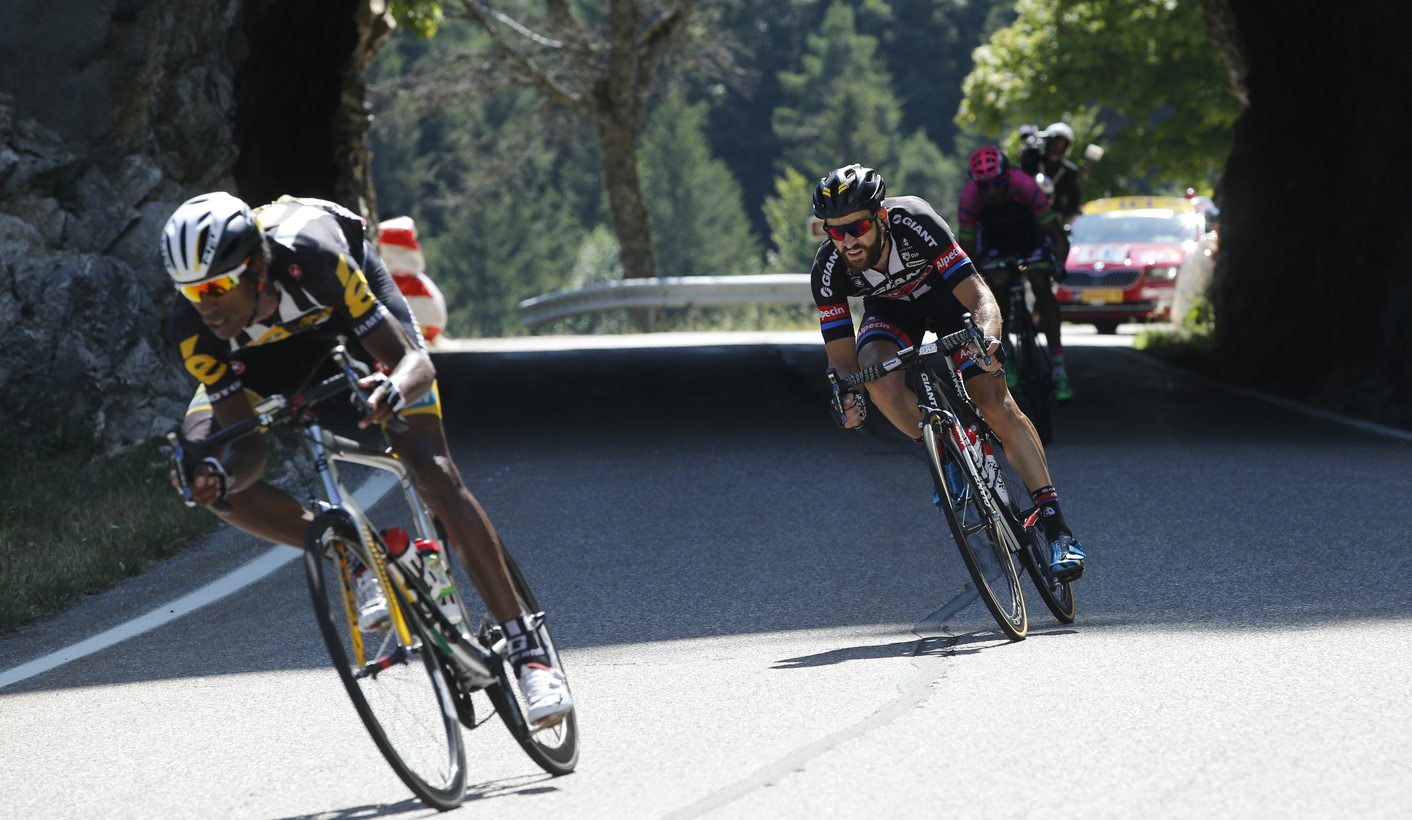 They’ve won a stage. They’re second in the team standings. And now, Doug Ryder, the Tour de France’s newly anointed strategic genius, is about to make like Hannibal and storm the Alps. But as the Tour takes a break before those gruesome mountain stages, Ryder made the time to chat to Daily Maverick. By RICHARD POPLAK.

As the African sporting story of the year—of the decade?—continues to write itself in France, Doug Ryder finds himself at the foot of the Alps, looking up at those icing-frosted monsters and pondering the Smallness of Man against the unflinching Face of Nature. Or maybe he’s chilling with croissants and coffee. Or maybe he’s just taking a bunch of meetings with bean counters in suits, all of whom want a piece of the second-place team in this, the 103rd Tour de France.

You know the story by now, right? MTN-Qhubeka are the second ranked team in the hardest professional sporting contest on earth. How did it come to this? How have a bunch of Africans and their European ringers come to dominate the Tour’s storyline? How has a rookie TdF Team Principal managed to outwit so many seasoned, European ex-dopers? Is Sports Minister Fikile Mbalula on his way to Paris to baptize Ryder in a vat of Johnny Walker Blue?

“It was amazing, hey?” said Ryder, when we spoke by Skype on Tuesday morning. “We had an incredible stage, it’s a dream come true for sure.” But Ryder wanted to point out that the win was followed by a top-five finish by a bloodied Louis Meintjes on stage 15.

Ryder’s technique is simple but brutal, and requires absolute buy-in from the team: the race starts, and someone needs to be in the breakaway. If cyclists hope to break free from the main group, they should expect MTN-Qhubeka cyclists with them.

It’s worked. “Now we’ve moved to second in the classifications, and we’ve been the best team on the day for three times,” says Ryder. “The team is really really trying for stage wins every day. Daniel Teklehaimanot came 7th on Day 16 of the Tour de France! It was super hard. It’s not like these breakaways are easy. You’re seeing the incredible recovery time, which has great potential for the future. It’s pretty much unheard of.”

Indeed, at 27, Teklehaimanot is coming into his own as a great Grand Tour combatant, and with riders maturing later and later – Sir Bradley Wiggins won at 33, while Ryder Hesjedal surprised the cycling world by winning the Giro d’Italia at 32 – there’s no telling what the Eritrean is capable of.

But cycling, much like war, is won by generals, not by soldiers. Doug Ryder has been shelling the front of the peloton almost every day with the Belgian Serge Peuwels, Teklehaimanot, or Louis Meinjies—a relentless offense that has provided a big payoff. And Ryder has no intention of backing off.

“Our goals are still trying to win a stage next week,” Ryder told me. “The guys are in really good spirits, and feel like they can do something next week [in the mountains.] We’ll continue racing the way we’re racing, and getting in the breakaways. We’re present and we’re up there. We can be lucky, like we have been, we need to up the road and we need to be visible.”

Like most Tours, this has been a war of attrition. Meinjies is battered from that crash on stage 15. But nor has he backed off. While most teams have lost riders, MTN remains fully staffed at nine. In wanted to know how Ryder had pulled off this miracle.

“You’ve gotta be lucky,” he said, “and it’s not like we haven’t had riders crash. But I think it goes down to the preparation of the team. We’ve had 90 percent of our guys finish in the top ten. It just shows that everybody has had an opportunity to perform and to be successful. And so all the riders are really well prepared. If you look at the Tour of Spain last year, we are one of the five teams that finished with nine riders. The guys wanna complete the race. Continuing is not a decision or a discussion or even a thought process.”

Which led me to a thought: if a rookie manager is having such success, are some big names not baying to sign up?

“Ja, I mean some of the team managers, have said we’re having a dream tour. It goes down to planning and strategy—and our lofty goals have a lot of detail behind them. The vibe in the team, a lot of people seeing us laughing, we have staff from other teams looking at us, they want to come to our to team—the freedom our riders have to perform. Serge is the number one Belgian in the Tour, and the Belgian newspapers ran a headline, ‘Sorry Serge.” We forgot about you! We disregarded you. We’re sorry. Look at Steve Cumming! They have the freedom and the trust.”

Fair enough, but can we expect a blockbuster signing?

“Well,” said Ryder, “we’ll be making strategy going forward, building the depth the team. Some really interesting individuals are coming forward. We want to bolster our Classics group”—Classics being the monster one-day European Spring races—“and to strengthen that aspect of the team.”

The team’s reputation was actually made by winning the Milan-San Remo Classic in 2013, with the German Gerard Ciolek making a break in the final moments of a weather-pocked event. Should we expect a superstar like, um, Alberto Contador to come on board?

“Look, there are a lot of good riders on the market that could join us and not change the culture,” said Ryder. “There are some amazing people who want to join this team, which is amazing for our African riders—which is ultimately what this team is about.”

The team’s budget, according to Ryder, is “between seven and ten million euro,” as compared to about 34 million euro for Sky, who currently have Chris Froome in yellow. But regardless of how much things cost, Froome has come under massive doping scrutiny, as had Team Sky. I wanted to know if Ryder thought the doping allegations had any credence.

“There’s lots of talk about Sky,” he said. “I know lots of those guys well. If you see how hard the team works, and in terms of the funding, and how they prepare. We’ve seen how you can prepare for something specifically. It just shows what preparation can do. And that’s what they do, they really do well. They really knuckled down, and it absolutely shows. We aspire to that and look up to that. Preparation and planning—you make your own luck. And I think that’s what they do.”

In the next five days, in the lead-up to Paris, legends will be made, and other legends will be secured. Many things must fall, but not excellence. Ryder will end up winning, one day. But it doesn’t matter.