Tour de France: What will define success for Team Qhubeka? 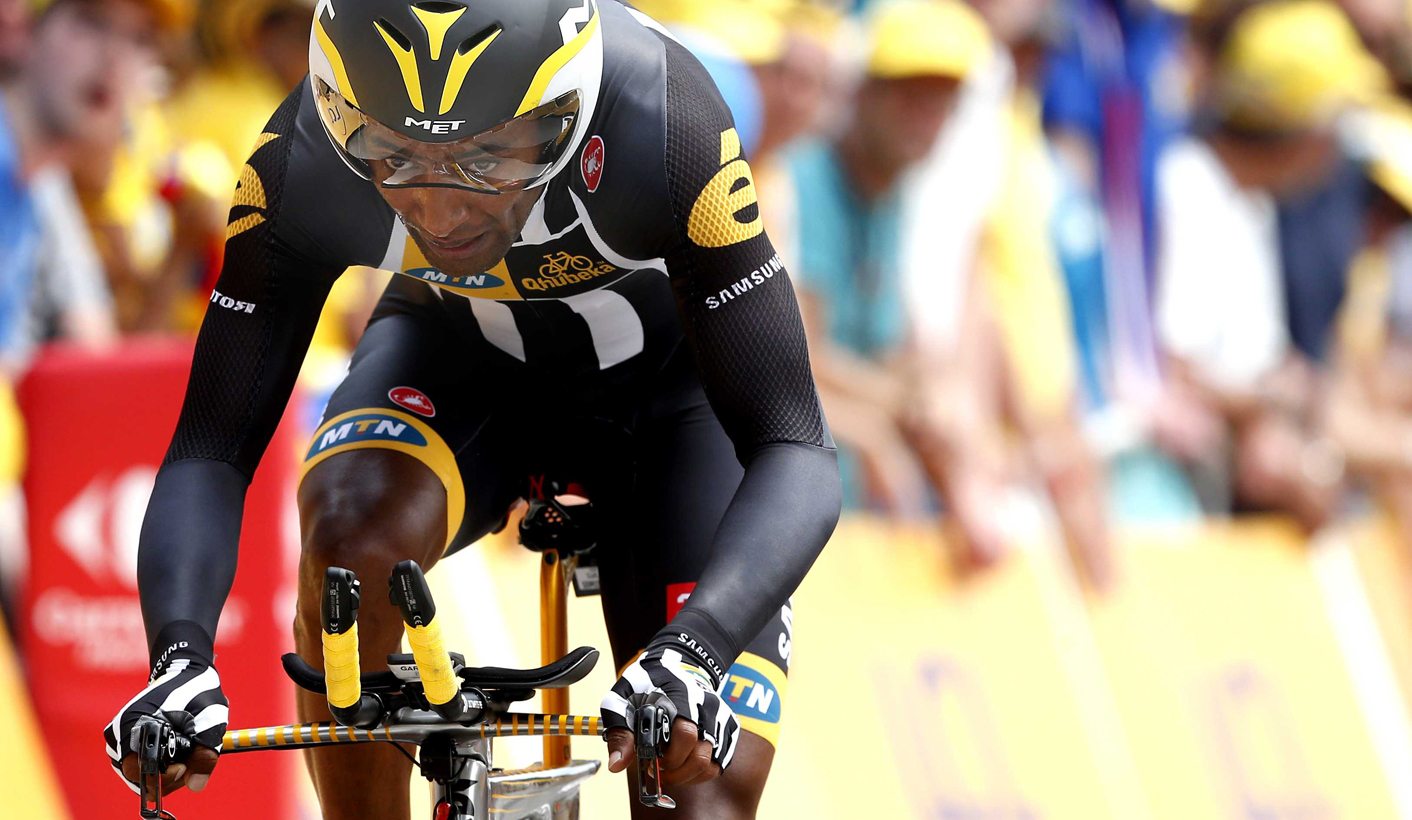 After day three of the Tour de France, Team Qhubeka had made a steady start. Two riders finished inside the top 50 and just two were placed outside of the top 100. Their success will not be defined by jerseys and leader boards, though, it’s far more ambitious than that. By ANTOINETTE MULLER.

The dictionary definition of success is pretty straight-forward. It says, the accomplishment of an aim or purpose. In some sporting contexts, success often borders on being content with mediocrity. Sometimes, a team or an individual simply taking part in something is seen as a “success”, regardless of the results. When Team Qhubeka team principal, Doug Ryder, received a text message to inform him his team had gained a wild card entry to this year’s Tour de France, many would have seen that as a success, but Qhubeka’s Tour de France success will stretch far beyond simply taking part.

By now you should know that this year is the first time since the race began that an African team is taking part. Although that is partly true. In the 1950s, a North African team with Algerian and Moroccan riders took part in three editions. That team was, however, registered in France. There have been a number of African riders since the tour began with Ali Neffati, from Tunisia, believed to be the first when he raced in 1913 and 1914. Team Qhubeka is different, though. They are registered in Africa, backed by an African company, MTN, and five out of the nine riders are African born. The team principal, Doug Ryder, is a born and bred South African.

On day one of the tour, they had one rider in the top 10. By the end of day three, three riders had crashed badly, but one, Jacques Janse van Rensburg, was placed 36th with Serge Pauwels 48th and Louis Meintjies 51st, only two of their nine riders were outside of the top 100.

There’s a long way to go in the tour yet and while the team probably won’t go on to win the whole thing to define their success, it hardly matters. But in Team Qhubeka’s case, success cannot be defined within limited perimeters, because this is no ordinary story and the goal is not an ordinary one and their story is far more important than winning stages, races or jerseys.

South Africans and, to some degree, Africans, are quick to jump on success of their own. Whether that’s claiming Chris Froome as our own or even trying to lay claim to Roger Federer through his South African mother, we love a sportsman achieving. While there have been a few South African riders’ success to latch on to, for the first time ever, South Africa and Africa now has its own team whose success will stretch far beyond what they achieve on the roads of France, Belgium and Holland.

Cycling, many say, is Africa’s sleeping sporting giant. The untapped potential that lingers across the continent is so vast that when it is eventually woken up, it will be a powerful force. Qhubeka, the charity behind Africa’s first true Tour de France team, hopes to change that. Like Team Rwanda and the Kenyan Riders, there is a deep belief in Africa’s potential. But the challenges are as vast as the talent lying in wait. There is no real ‘cycling culture’ and the lack of paved roads to practice on all play a part. Then there is the small challenge of the bikes. The gear required to take up cycling is astronomically expensive and many of the bikes you see on the road cost more than an average car. Needless to say that in a country, and a continent, where the majority of the population still live below the poverty line, getting a nice bike to race on is pretty low on the priority list. But charities like Qhubeka are aiming to change that. They provide bikes to people in exchange for community work, but having a bike and becoming a pro-cyclist are two very different things.

The plan for Qhubeka, both the charity and the team, is very much a long-term one and one that has been in the making for many years. For Ryder, there are many reasons to be optimistic.

“I believe in the next three years we could have a black African rider on the podium in a grand tour,” he says. “The riders coming through are young in age and experience. They are 24, 25, 26. They are still getting used to riding in bunches, getting used to the tactics.

“There are certain things you just can’t simulate on a timed effort up Alpe d’Huez. But the potential is there. As more riders come through so the upward pressure will start to have an effect. My dream is that in the next two to three years there will be an African rider on every WorldTour team.”

He adds: “The funny thing is we presented a five-to-10-year plan to [Tour organisers] ASO but it’s now been two years and we have already got a place on the Tour. I did not think we would get there in the first five years. But the riders are there on merit.”

The answer to the question of what will define success for the first truly African team at the Tour, then, is simple: they’ve already had it. Having the team at the Tour will, hopefully, have a knock on effect. More people will be encouraged to take up the sport and more sponsors will be keen to back the riders. The more sponsors there are, the more bikes Qhubeka can get to people. The thought of having a strong British rider or even Tour champion was inconceivable 20 years ago, but with the work Team Qhubeka has done, the thought of having a black African champion is no longer inconceivable, it’s simply a work in progress.

“A bicycle has changed Boasson Hagen’s life but not as much as it would a kid from a township in Soweto,” Ryder explains. “Our riders are not just supporting themselves they are supporting their communities and families — Daniel (Teklehaimanot, one of two Eritrean riders in the team), for instance, is one of 17 children. It is incredibly inspiring. They are heroes at home.

“And they are tough. [The Eritrean] Merhawi Kudus crashed at 70kph at last year’s Vuelta. I guarantee you that no European rider would have finished that race. But he did. The desire he showed was incredible. It was like awakening the lion. In the Kruger he looks all peaceful, but if you wake him up he becomes a different animal.”

Slowly poking the sleeping giant will be a long-term success of Team Qhubeka, and if they can teach Europeans how to click when saying the team name, that’ll be a bonus. DM

Photo: Eritrea’s Merhawi Kudus of the MTN-Qhubeka Team competes in a 13.8 km individual time-trial, during the first stage of the 102nd edition of the Tour de France cycling race in Utrecht, The Netherlands, 04 July 2015. EPA/BAS CZERWINSKI