Beautiful and twisted: The story of Virunga National Park 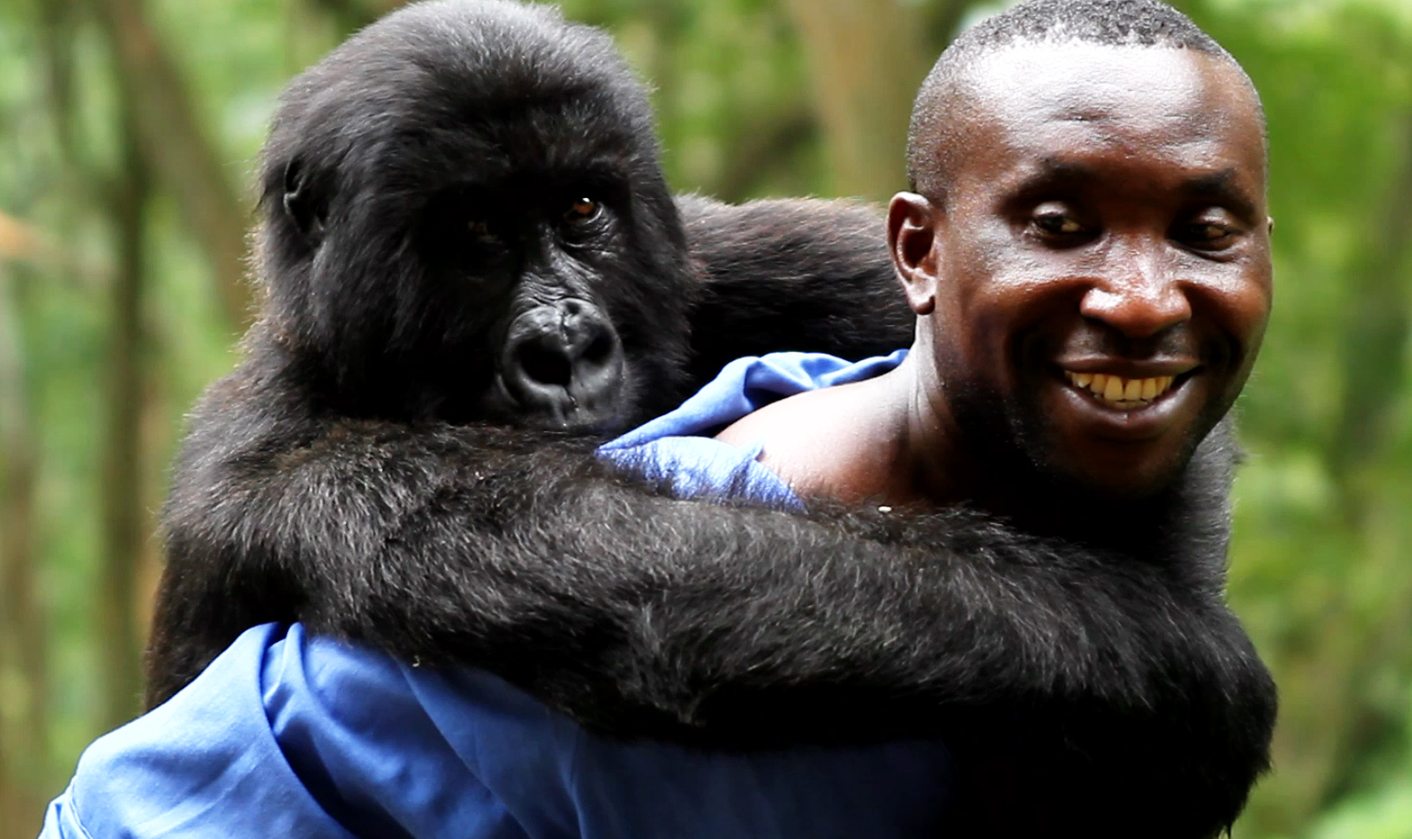 Virunga National Park is one of Africa’s treasure troves, and one of its most toxic, and intoxicating, killing fields. Under threat from various armed militias as well as poaching, illegal fishing and charcoal harvesting, and now, oil exploration, it is one of the most biodiverse, ecologically rich places on earth. TONY WEAVER talks to the park’s chief warden, a man with one of the most dangerous jobs in the world.

It is one of the most beautiful places on earth. And one of the most tragic. It is that corner of Africa where Rwanda, Uganda, and the Democratic Republic of the Congo come together.

Straddling it all is the 7,800 square kilometre Virunga National Park, Africa’s oldest proclaimed park, and one of our continent’s most important protected areas (the park was founded by King Albert I of Belgium in 1925 – a year before the Kruger National Park – as Albert National Park).

“This is probably the greatest protected area on earth, containing as many as 40% of Africa’s species, with more endemic species than any other African park,” the park’s chief warden (his official title is director), Emmanuel de Merode says in his quiet, understated way. Everything about De Merode is understated – he plays down the fact that he has a PhD (on the illegal bush meat trade in the Congo), that he is a Belgian prince (albeit born in Tunisia and raised in Kenya) – and that he has one of the most dangerous jobs in Africa.

On 15 April 2014 he was ambushed on the road between the regional capital, Goma, and the park HQ near Rumangabo. He was shot in the chest and abdomen. He was lucky to survive – since the Rwandan genocide in April 1994, and the subsequent rise of rebel militias operating out of the eastern DRC, 140 Virunga park rangers have been killed in battles with poachers and rebels, often one and the same thing, and the park headquarters has been bombed and attacked by rebels.

Virunga is under constant siege by rebel groups – 12 different militias, including M23, the Democratic Forces for the Liberation of Rwanda (FDLR), Nyatura and Mai Mai operate in the area. They compete with each other for the easy cash that can be made from the park’s natural resources: Lake Edward for fish, elephants for their ivory, the park in general for bush meat and baby gorillas, and most importantly, from an economic point of view, the forests for charcoal – especially the old growth hardwoods from the Afro-Montane and Afro-Alpine forests. And now there is oil to add into the mineral mix. This is one of Africa’s treasure troves, and hence, one of its most toxic, and intoxicating, killing fields.

“We have been able to protect all the major species from extinction except the African wild dog, but they have all been severely depleted,” De Merode tells me. “Before the genocide in Rwanda and the subsequent civil wars in the Congo, there were estimated to be between 27,000 and 30,000 hippos, the most important population in Africa. By 2005, there were just 350 individuals left.

“Since 2005 when the Frankfurt Zoological Society did an aerial survey and discovered the extent of the slaughter, we have put a lot of effort into protecting them, because each hippo deposits about 40kg of nutrients a day from the land into Lake Edward, they are very important habitat architects. They help to keep the fishing industry secure, and we now have about 1,450 individuals.”

That fishing industry is worth $40-million a year. “The Mai Mai rebels – originally a peasant uprising, which has degenerated into a group that is involved in general banditry, and is disorganised, badly trained and poorly armed – are closely tied into illegal fishing. Legally, there are only 700 boats allowed on Lake Edward, but there are four to five thousands boats, harvesting between 12 and 14,000 tons of fish a year, 80% of it is illegal fishing,” De Merode says.

As in the rest of Africa, and East Africa in particular, the park’s elephants are also under severe threat. “They are a major challenge because of the high price of ivory and the widespread availability of firearms in the region; it has been a difficult decade for elephants. Before the genocide and the civil wars, we had over 3,000 savannah elephants, that has crashed to about 200. Forest elephants are harder to count, but we have perhaps 500 to 600 left, they are less sought after because of their lighter ivory.”

Complicating the picture is that LSE-listed British company Soco has oil prospecting rights over almost half the park, and has allegedly been cosying up to M23 for protection. This is an allegation Soco strenuously denies.

The region is one of the most biodiverse, ecologically rich places in Africa. The Virunga National Park is the spine that holds together some of the most extraordinary landscapes on the continent – the world’s largest lava lake (Nyiragongo volcano), forests that range from lowland to Afro-Alpine, savannah, snow fields and glaciers. The area includes Uganda’s Bwindi Impenetrable Forest National Park, Ruwenzori Mountains NP, Mgahinga Gorilla NP, and Queen Elizabeth NP; and the Volcanoes National Park in Rwanda (made famous by the murdered Dian Fossey). Also in the park is Nyamulagira volcano, the most active in Africa and which has erupted over 40 times since the late 1800s.

Virunga is a Unesco World Heritage Site and along with Bwindi and the other parks in the region, is home, on the dormant flanks of the 4,380 m Mikeno volcano, to the last 750 mountain gorillas on earth (the park is also home to eastern lowland Grauer’s gorillas and chimpanzees, making it the only place in the world that is home to three taxa of Great Apes).

Emmanuel was brought in as director of the park on 1 August 2008 by the Congolese government after the previous director was suspended for involvement in not only the illegal charcoal trade, which is wiping out Virunga’s forests, but also in the massacre of nine mountain gorillas in July 2007.

“The park has become a source of revenue for the different armed groups. Virunga’s game rangers are seen as an opposition force, so we have become a target. One hundred and forty rangers have been killed by rebels or poachers since this conflict began, and our headquarters at Rumangabo has been bombed and attacked.

“Six million people have died in Eastern Congo since the genocide, and while it was provoked by the genocide, what has kept it going, that terrible conflict, is the illegal exploitation of natural resources in Eastern Congo, this incredibly rich area. A lot of attention has been given to coltan (columbite–tantalite) the component used in mobile phones, Playstations, it’s the sexy thing, but there are other resources that are even more important, particularly those in the National Park – there are two main resources that are sought after, oil and charcoal.

“The charcoal is the key, the forests, from lowland rain forest to Afro-Alpine forests. You have four million people living within a day’s walk of the park, and one of the most important commodities for those people is household fuel for cooking, sterilising water, all critical for survival, and that means charcoal – charcoal is one of the most under-reported and destructive resources on the African continent, the cause of massive deforestation, with very, very serious consequences to human welfare, and nowhere more so than around Virunga,” De Merode says.

“Eighty percent of your biomass is lost before you even process the charcoal because they don’t have the resources or technology to process the trunk of the tree, so they only use the branches, and the trunk is left to rot. The rest is burnt very inefficiently in makeshift kilns, so the return on the biomass ends up being less than 10%. Charcoal underpins the insecurity in the area. You have a city like Goma, nearly a million people who are reliant on charcoal for survival, the forests outside the park have been wiped out, so the only reliable source of charcoal is the park.

“That makes it illegal, and it creates a trafficking network, and that becomes a source of revenue for the armed groups that control that trafficking network. It becomes a protection racket, and that’s how the armed groups make their money – the women who go in to transport these 80kg sacks of charcoal have to pay $25 a month to avoid getting raped or otherwise attacked by the militias. So $25 a month multiplied by several thousand women becomes a very significant revenue stream for the FDLR.”

Gorillas were not the primary target of the 2007 massacre, De Merode says. It was the rangers who were the target, the logic being that if you get rid of the gorillas, there will be no work for the rangers. Then nobody would stand between the rebels and the main target – the habitat, the forests, the fish in Lake Edward, the coltan, oil and other minerals under the ground, all the natural resources that make the Virungas one of Africa’s treasure troves.

It is a conflict that has seen more than six million people die since 1994, the highest number of casualties in any war since World War 2. “More than $90 billion has been spent trying to bring peace and stability to eastern Congo, and nothing has worked,” De Merode says.

He is working with a wide range of organisations under the umbrella of the Virunga Alliance, and ambitious plans have been drawn up to create a minimum of 60,000 jobs and make the park, and its resources, a more attractive prospect than working with, or being part of, the rebels.

Perhaps paradoxically, I interview De Merode in the plush Cape Town head office of Investec. Investec was a shareholder in the oil company Soco until they were alerted to its activities in the Congo, and they have since divested “following concerns over environmental, social and security issues in Virunga”. The company is now working with De Merode and the Virunga Alliance on a long term development plan for the park to wean the surrounding communities off dependence on the rebels.

The plan includes building hydropower plants to generate up to 100MW of power for the park’s four-million neighbours to replace charcoal as an energy source, building up the fishing and agriculture industries, and developing tourism.

De Merode refuses to speculate on who was behind the ambush that nearly killed him last year. His Wikipedia page states that “a legal enquiry into the motives and identity of the attackers was undertaken by the Congolese authorities. Media reports have cited various suspects, including those engaged in the illegal production of charcoal, people associated with Soco International, a British oil company engaged in the exploration for oil in the national park, and guerrillas associated with the Democratic Forces for the Liberation of Rwanda (FDLR)”.

(Soco, via their PR company, Bell Pottinger in London, were asked to comment on this on June 16, and again on June 17. No reply has yet been received.)

Let’s leave it at that. DM