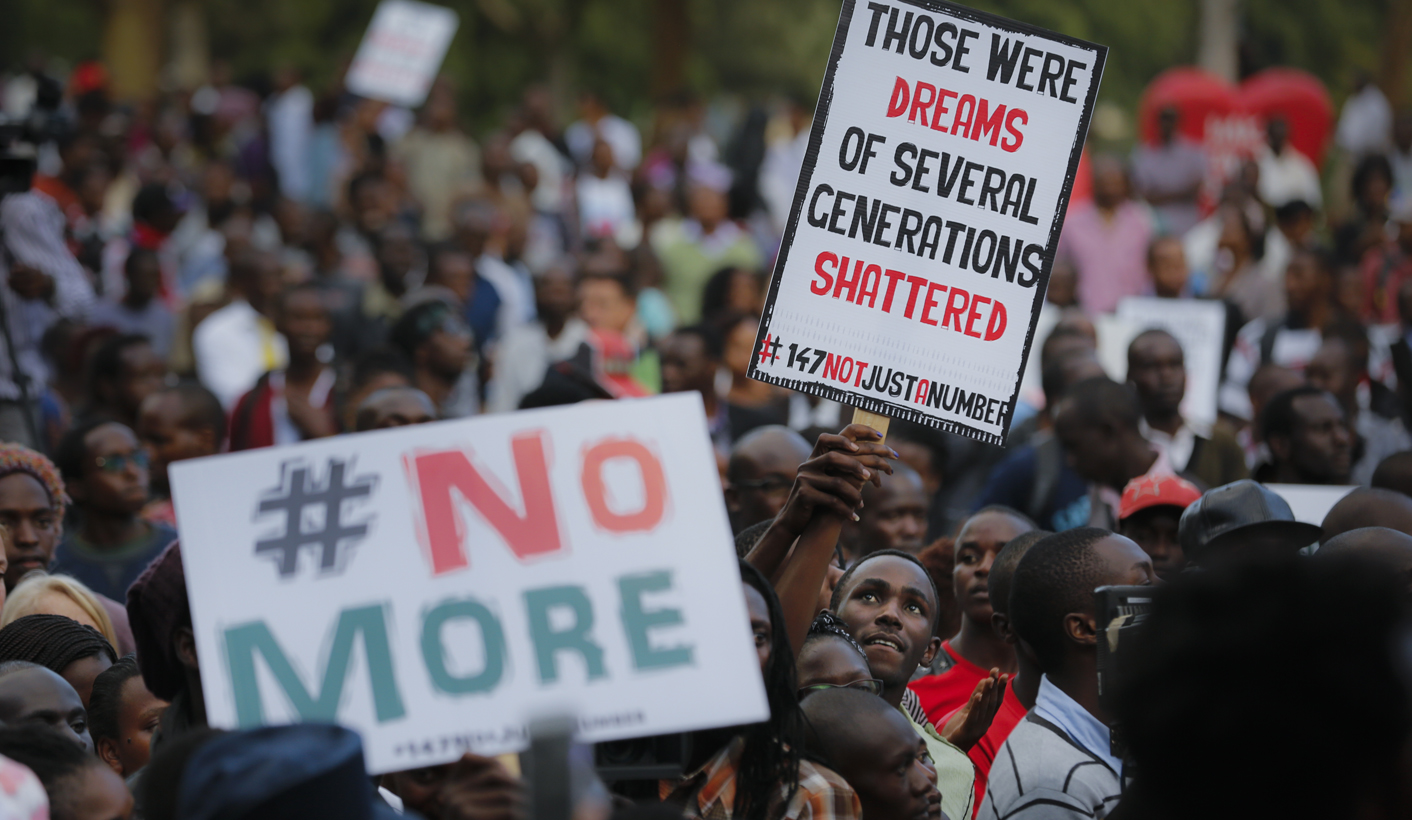 Al-Shabaab’s 2 April attack in Kenya that killed 147 people at a university in Garissa, 120km from the border with Somalia, has again cast doubt on the Kenyan government’s ability to keep its citizens safe. Three members of Crisis Group’s Horn of Africa staff consider here the implications of Al-Shabaab’s longstanding ambition to broaden its campaigns from Somalia into the wider East Africa region. By Cedric Barnes, Abdullahi Abdille and Zakaria Yusuf for the INTERNATIONAL CRISIS GROUP.

Why is Al-Shabaab increasingly targeting Kenya? In its statement following the attack, Al-Shabaab claimed it acted to avenge atrocities it alleges were committed by the Kenyan military deployed in Somalia (now part of the African Union peace-support operation AMISOM). This puts pressure on the Kenyan commitment to that mission. Al-Shabaab also claimed its fight was to liberate “all Muslim lands under Kenyan occupation”, including “north-eastern province and the coast”. Despite being anachronistic given Kenya’s recent divisions into county-based government, this language chimes with pan-Somali nationalist and irredentist slogans of the 1960s and ’70s.

Furthermore, trying to sow domestic divisions in Kenya, Al-Shabaab claimed it was taking revenge for historic injustices against Muslims in the country. It hopes in this way to prompt draconian responses from the government that will further embed the narrative of an anti-Islamic Christian government and gain more recruits. It also claimed it spared Muslims in the Garissa attack, echoing directives on minimising Muslim deaths most recently heard from al-Qaeda in the Arabian Peninsula (AQAP) in Yemen. Nevertheless, Al-Shabaab still killed Muslims at the university; in Somalia, most of its victims are Muslims.

How deep is the extremist problem in Kenya?

President Uhuru Kenyatta’s immediate statement that extremists are deeply embedded in Kenya is significant. The statement, as well as the fact that the government offered a 10-day amnesty to all youth who have joined Al-Shabaab, is a new acknowledgement of the home-grown threat. Since the 1998 al-Qaeda attack on the US embassy in Nairobi, and a second al-Qaeda attack that hit Mombasa in 2002, the government has consistently downplayed the home-grown threat and blamed extremism on outsiders. Kenya was spared further attacks until 2011, although extremists, including Al-Shabaab and sympathisers, used the country and its main towns for radicalising, recruiting and fundraising throughout this period. There was an uptick of attacks after 2011, apparently because of the Kenyan government training of anti-Al-Shabaab Somali militias and Kenya’s direct intervention into southern Somalia in October of the same year. These ranged from low-level incidents to the high profile mass shooting that killed four attackers and 67 other people in the Westgate Mall in September 2013.

Al-Shabaab is not without Kenyan supporters. As previous Crisis Group reporting has shown, extremism thrives on a groundswell of Muslim grievances, radicalised by wider global trends and writings.

How is the Kenyan government responding to the threat?

The political response to this latest attack has been mixed. National and county governments acknowledge their shared duty to combat the threat and preserve national unity. However, the financial freeze of 86 bank accounts of named individuals, companies and NGOs looks more like political score-settling than thorough counter-terrorism action. Much more radically, senior Kenyan Somali politicians and county leadership have called for the closure of Dadaab, one of the world’s biggest refugee camps, between Garissa and the Somali border.

Like Westgate, and other less high profile attacks in Mpeketoni in Lamu county (June 2014) and Mandera county (November and December 2014), Garissa again exposed serial prevention and response failures by the security services, even though the raw intelligence relating to specific threats is not lacking. It is clear that the government underestimated the domestic “blow-back” of its 2011 Somalia intervention, as Crisis Group has warned. There are now growing calls for the withdrawal of Kenyan troops from Somalia too.

Still, the domestic threat to Kenya – umbilically linked to Somalia – is gathering momentum. This makes the political and administrative strategy to combat extremism all the more critical. The shock of Westgate triggered bad policy decisions that cost the government support, including mass arrests and internment in Nairobi’s immigrant-heavy Eastlands estates, violent raids on mosques in Mombasa, and suspected extrajudicial killings of Islamic sheikhs sympathetic to Al-Shabaab. The subsequent Al-Shabaab attacks in Mpeketoni and Mandera brought further polarisation between different ethnic and faith communities, as well as thinly veiled aspersions cast about “opposition” involvement.

How resilient is Kenya?

Apart from frightening away the tourist dollar, a potentially more insidious effect of the latest attack may be to push out non-locals and non-Muslims, including health workers and teachers, from Muslim dominated regions like Garissa. This not only reduces government service delivery capacity, but also national cohesion. Another extremist goal is to reverse the relative progress made in normalising Kenya’s north east since the early ’90s, forcing Nairobi to make a de facto return to the “closed area” policy under emergency laws reminiscent of the colonial period and the first 20 years of independence.

Some perceive a conspiracy between Al-Shabaab and those in the establishment who find the recent rise of the Kenyan Somali community a threat to their political and commercial interests. Yet overall, threats to Kenya’s stability are not primarily due to terrorism, but rather depend on whether the authorities use the current crisis to bring about long-awaited security apparatus reforms, including both improving morale and leadership in the police and clamping down further on corruption.

Despite Al-Shabaab’s claims of the historic marginalisation and persecution of Kenya’s Muslim ethnic minorities, the country’s new system of devolved government has brought unprecedented financial resources and local governmental autonomy to Somali-majority counties of the north east. Though the full effects are yet to be felt, locally led administration and development could prove to be the best weapon against Al-Shabaab and other extremists.

But an operational gap between the still centrally controlled security apparatus and county political and administrative structures is the immediate weakness. Many point to the need for locally raised police and militias to combat the threat. They cite the example of the successes of the “special police” in neighbouring Ethiopia, which has managed to keep Al-Shabaab (as well as other insurgent groups) at bay, even though this has taken a considerable toll on basic civil liberties. Kenya has its own experience of “home-guards” in counter-insurgent operations that have their own bitter legacies.

What does this attack say about Al-Shabaab in Somalia?

For the last two years there has been a narrative that Al-Shabaab’s attacks in Somalia and increasingly in Kenya are a sign of the group’s weakness. In fact, Al-Shabaab has made a strategic shift. The extension of Al-Shabaab outside of its Somalia base began at least four years ago under the late Emir Godane (killed by a US drone strike in September 2014) and continues under his successor, Ahmed Diriye. This strategy is a response to its earlier tactical military mistakes inside Somalia, its anticipation of more co-ordinated East African military pressure against it, and its ideology of widening a regional and global jihad.

Al-Shabaab has shown it can operate across Somalia and can control minds and money through indoctrination and intimidation. In Kenya, as in Somalia, it has also consistently articulated local grievances alongside its jihadi propaganda, a mutually reinforcing narrative that attracts recruits and resources, locally and internationally. Its local knowledge allows it to exploit communal tensions and target weakness in elite political establishments. Critically, it exploits dissatisfaction with the way security apparatuses appear more concerned with defending the Kenyan establishment than protecting local communities. Al-Shabaab has long honed and employed these tactics. The East African context will not change quickly, and Kenya still has a long struggle ahead of it. DM

Photo: People listen as an artist gives a speech on the stage during a memorial concert held for the victims of an attack on Garissa University College that killed more than 150 people, in downtown Nairobi, Kenya, 14 April 2015. EPA/DAI KUROKAWA