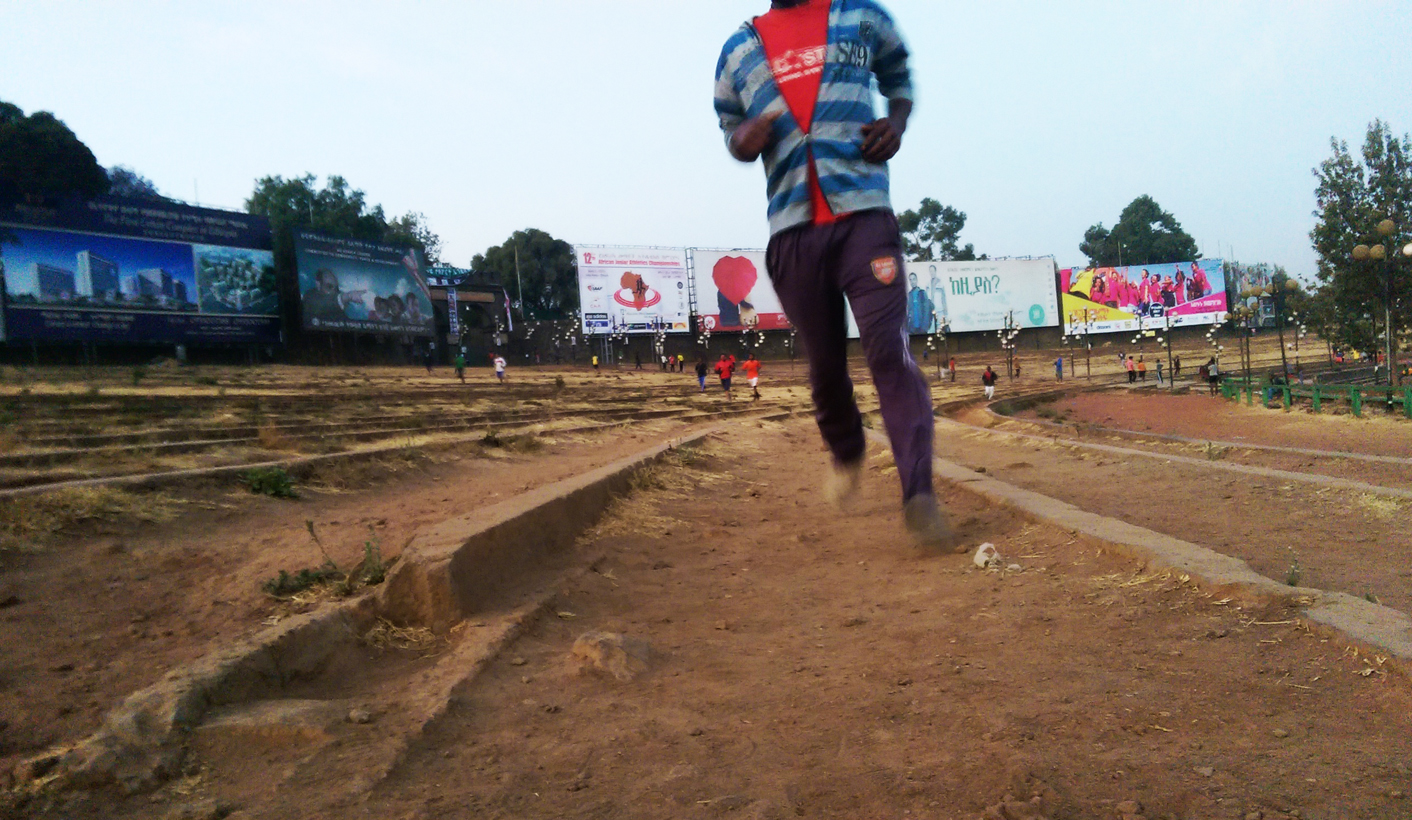 Meskel Square is the spiritual home of long-distance running in Ethiopia. Every day, as the sun rises, hundreds of runners trace a path back and forth across its vast amphitheatre, literally following in the footsteps of Abebe Bikila and Haile Gebrselassie. SIMON ALLISON joined them.

It’s an hour and a half before dawn. I am early. Meskel Square, Addis Ababa’s grand centrepiece, is already busy. The long-haul buses leave from here before the sun rises: 11 hours to Dire Dawa; 12 hours to Bahir Dar; 50 hours to Aksum. In the darkness, lit by a few flickering streetlights and the occasional high beams of passing cars, stand already-weary passengers, their luggage at their feet.

I hide in the shadows, self-conscious in shorts and takkies. I’m not taking a bus. I’m waiting for the other runners to arrive – the dozens and dozens of Ethiopians who, famously, use the square to train every morning, running back and forth across its vast, semi-circular amphitheatre.

The track starts at the bottom, and you work your way up. Running from one side to the other, without skipping a level, you’ll run 42 kilometres. A marathon.

Ethiopia and Kenya are to long distance running what New Zealand is to rugby, or Jamaica is to sprinting: utterly dominant. In Ethiopia, support for the sport is almost religious in its fervour. You know the names: Abebe Bikila, Tirunesh Dibaba, Kenenisa Bekele and, of course, the emperor himself, Haile Gebrselassie. At one point or another, they all trained on the Meskel Square steps, and Ethiopia’s new crop of Olympic hopefuls still do.

It’s more than just a track. Meskel Square is the ceremonial home of Ethiopian running. It’s here people gather, in their hundreds and thousands, to watch Gebrselassie on the big screen. It’s here that the athletes, medals glinting, are fêted on their return. It’s here that the Great Ethiopian Run, the largest athletic event in Ethiopia, begins and finishes. And it was here – where else? – that 5,000m world record holder and reigning World and Olympic 10,000m champion Tirunesh Dibaba wed her husband (two-time 10,000m silver medallist Sileshi Sihine) in front of a staggering 500,000 well-wishers.

If East Africa is the capital of long-distance running, then Meskel Square is its high temple.

Photo: Athletes warm up with push-ups and skipping ropes before tackling the stone steps of the amphitheatre. (Simon Allison)

No one’s figured out why Ethiopians and Kenyans are quite so good at this particular discipline. There are theories. The altitude plays a role: Addis, 2300m above sea level, is nearly 600m higher than Johannesburg, and it gets much higher in the more rural highlands. This isn’t convincing on its own. Where are the Bolivian marathon record holders? Another theory looks at genetics, another at diet, another at body shape. It’s likely a combination of things, and sheer enthusiasm must play a role too.

Photo: As they run, the city slowly wakes up. In the background are the long-distance buses taking people to all corners of Ethiopia. (Simon Allison)

Finally, I see another runner. A kid in thick jeans and tattered trainers, gingerly picking his way across the steps. Millions of strides have compacted the earth into a hard, smooth trail, but it’s still too dark to see properly and there are plenty of traps for the unwary: errant rocks, stubby tufts of grass, the odd piece of broken glass.

I join him, starting at the very bottom like I’m supposed to. The pre-dawn silence has given way to roosters and the mechanical roar of those buses as they pull off. There is hooting and the cries of muezzins and minibus conductors – “Bole Bole Bole! Bole! Boooooooole!” – as the rest of the city wakes up. I had put together an Ethiopian-inspired playlist (highlights: Bright Eyes’ ‘Haile Selassie’; Caribou’s ‘Lalibela’; and a smattering of Bob Marley, for this is the land of Ras Tafari) but no one else is wearing headphones.

Photo: Running is inextricably tied up with Ethiopia’s national identity. It is a source of pride, and continuity. (Simon Allison)

By now it’s getting lighter, and we’ve got company, plenty of it. Some have started on the track, while others are warming up with push-up and skipping ropes. Few stretch. Running is the most democratic sport. Anyone can do it, and you don’t need fancy kit. Some guys looks the part, with the lightweight shoes and the breathable fabrics. They are genuinely fast. It is intimidating. Others are more casual: lots of track pants and football shirts, and a wide assortment of footwear. A few are running in sandals. They’re still fast. Ages range from late teens to early forties, and I only see two women.

I’m a little off the pace, so, after about 5km, I stand aside and just watch. The kid who began before me is still going, faster and farther than I could ever manage. From my vantage point, I can see the ever-expanding Addis skyline to the west, an explosion of steel and reflective panels and scaffolding. To the east is the slightly incongruous Red Terror Martyr’s Museum, a memorial to those killed by the Derg regime in the 1970s and 1980s. Ethiopia’s future on one side, its history on the other. It’s as if the runners, zig-zagging from one side to side, are the ties that bind that past and that future together.

This isn’t as crazy as it sounds. Running is inextricably bound up with Ethiopia’s national identity. It’s in the country’s DNA – a source of pride and also of continuity. Through feast and famine, through revolution and regime change, one thing remains constant. As the sun rises, Meskel Square will belong to the runners. For one morning, I was one of them. DM

Main photo: The track itself is dusty and uneven, with plenty of pitfalls for the unwary. (Simon Allison)