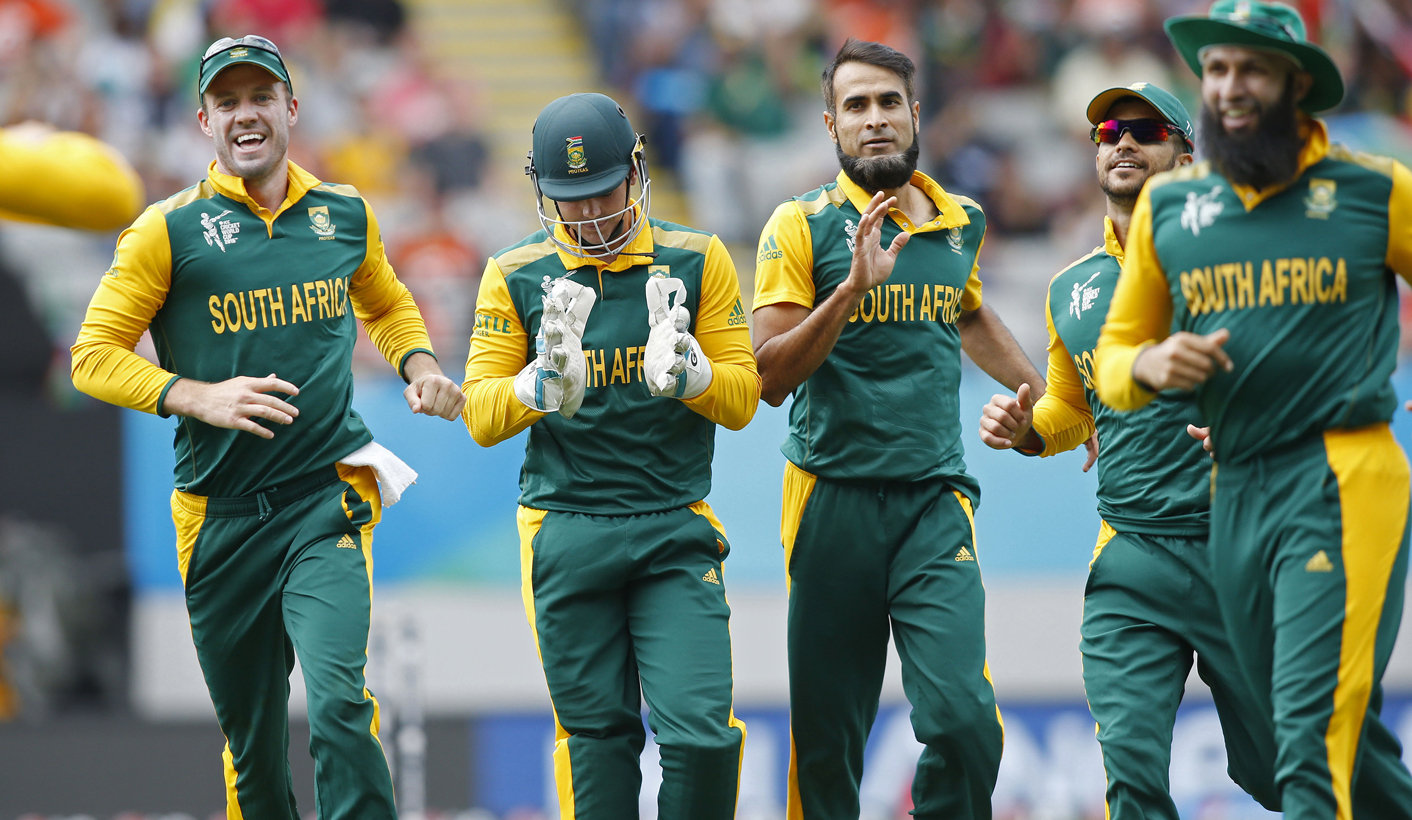 South Africa’s balance, or lack thereof, remains an issue as they continue their journey through the World Cup. The Proteas have to play a fifth bowler when they go into the quarter-finals, if their effort against Pakistan on the weekend was anything to go by. By ANTOINETTE MULLER.

South Africa continued their Jekyll & Hyde World Cup campaign over the weekend, losing by 29 runs to Pakistan. Poor shot selection and some impressive bowling from Pakistan led to South Africa’s undoing, and once again underscored some serious issues in the way the South African side is set up.

If there is one thing which the loss answered, it’s that South Africa’s balance simply is not right. The four frontline bowlers more than did their bit to help restrict Pakistan to just 222 runs, but even with this in mind, the fifth bowler combination was dreadful. The duties were shared between JP Duminy and AB de Villiers and, between them, they conceded 77 runs. Now, Pakistan might be comically unpredictable and the “right” Pakistan certainly showed up on Saturday, but this balance conundrum is something South Africa needs to figure out – and fast.

It is becoming increasingly evident that playing five frontline bowlers might be the better option, especially if Vernon Philander returns to the attack and bolsters the batting line-up a bit. Without a genuine all-rounder in the side, South Africa have been forced to fiddle with part-timers to make up the overs. But this is simply not a sustainable approach.

South Africa’s next match is against the United Arab Emirates and it is a match they are expected to win, no matter what combination they choose. But when it comes to the latter stages of the tournament, South Africa will have to make peace with the fact that they cannot opt for four bowlers – which means they have to sacrifice a batsman in order to accommodate an extra bowler.

The top six in the batting line-up pick themselves, and they have shown that they can be relied on to bring up big totals, despite the fact that they stutter when it comes to chasing. If the lack of mental application can be solved, then there is more than enough talent in the top six to be confident of chasing big totals. There are concerns over Quinton de Kock’s form, but dropping him at this stage of the tournament will probably do more harm than good. South Africa have to believe that their young prodigy will make good, and find the form that he showed before he was knocked down with injury. Last week coach Russell Domingo said that De Kock simply needs a little bit of “TLC” – and perhaps a good match against the UAE is all he needs to get him back to firing on all cylinders. Still, even with De Kock in dubious form, South Africa have showed that their batting line-up is capable of notching up big totals. Their biggest headache remains around the bowling combination and the number seven spot.

The problem is that South Africa do not have a wealth of options. A combination of Farhaan Behardien, Kyle Abbott and Wayne Parnell is as far as depth goes. Behardien has been unremarkable, Parnell is incredibly inconsistent and Abbott is a decent bowler, but not overly reliable with the bat. This leaves quite a selection conundrum and South Africa only have themselves to blame.

Aaron Phangiso has not played a single game this World Cup and considering Imran Tahir’s importance and efficiency, it remains unlikely that he will take part. This begs the question: why was a back-up spinner picked in the first place? Surely his spot would have been more suited to a player who could offer some sort of “all-round” impetus? Ryan McLaren or a wildcard option of David Wiese or even Albie Morkel could work. That the selectors have erred in getting the balance right is more apparent than ever, and there’s not much they can do to change this as it comes to crunch time.

South Africa are not in any danger of not qualifying for the next round. Even in the unlikely event that they lose to the UAE, they will progress to the next round, but the big challenge will come in the quarter-finals. They will most likely face Sri Lanka in the next round. They are a team packed with incredibility talented batsmen, which means that South Africa won’t be allowed any bowling slip-ups. DM