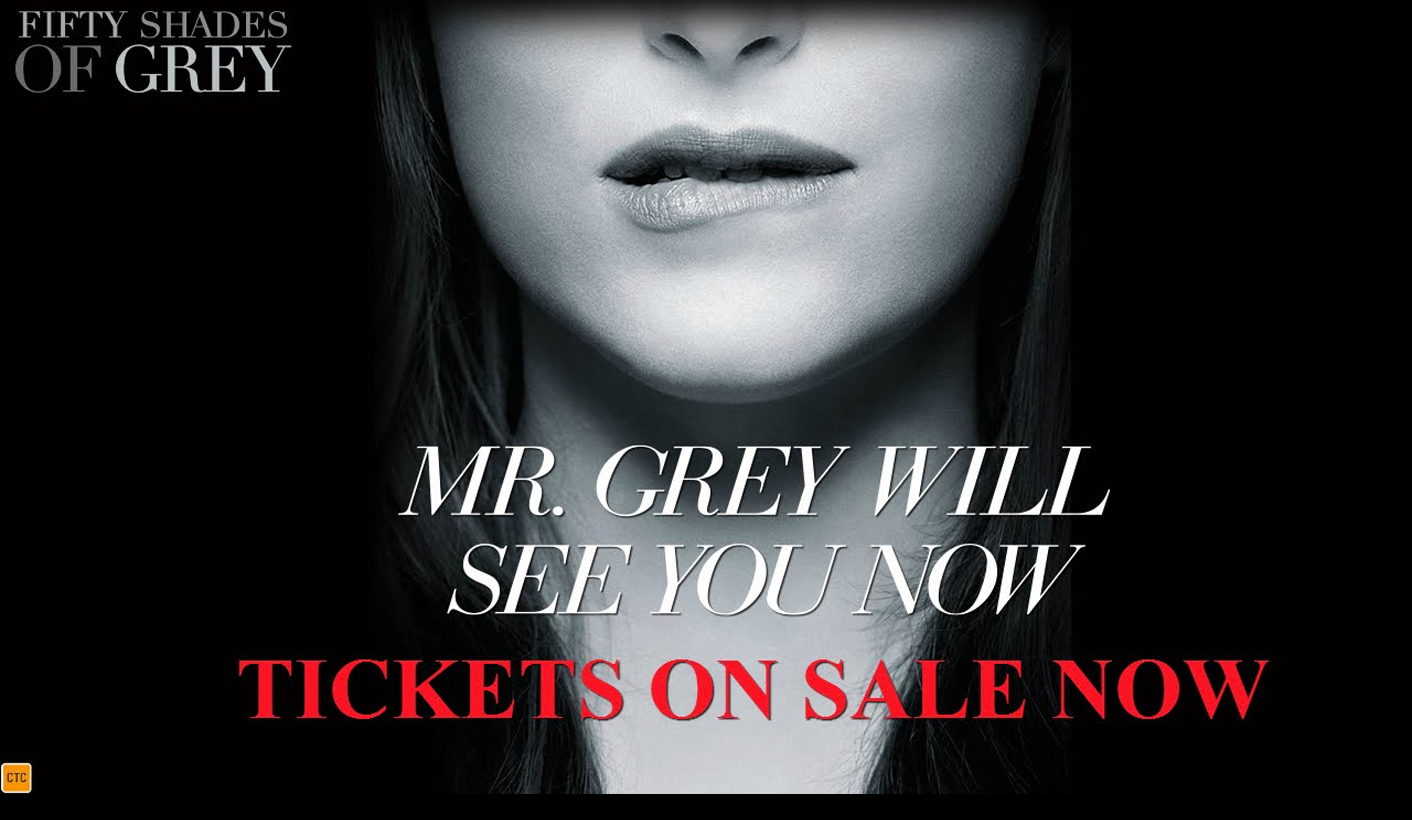 South Africans probably have a different understanding of Fifty Shades of Grey to the rest of the world – it’s our State of the Nation Address, after all, and nobody knows how to navigate the grey areas of the rules quite like our president. But Valentine’s Day is coming up, and this week saw the world premiere of the much anticipated (why?) film version of EL James’ bestseller being revealed to reviewers. MARELISE VAN DER MERWE decided to turn away from the Sona just long enough to ask whether the movie is going to be as bad as you think it is.

Reader, I’ve got something to confess. It took me several years to actually work up the motivation to pick up Fifty Shades of Grey. I’d been convinced from the beginning that those were hours of my life I was never going to get back. Boy, was I right. Let this be a lesson to me and Anastasia Steele alike: never doubt those gut instincts. I read as far into the book as I possibly could. Further, probably, than I should have. Being an optimist, I kept thinking it might get better. It didn’t. In the end, I gave up. Think of it as me taking one for the team. Now, if you haven’t already, you never have to.

Spoiler alert: EL James had her wicked way with the movie script too.

I never expected Fifty Shades to be good on a literary level. What I didn’t expect, however, was for it to offend me so deeply morally, intellectually and personally. I’m not being a prude, mind you. I don’t give two figs what people do behind closed doors with their knickers off. What bothered me, however, was the quality of the relationship between the two main characters.

Yet the two simpletons at the centre of Fifty Shades are models of the worst kind of conventional, unquestioning heteronormativity. The power play that I found most offensive occurred not inside their playroom but outside it. The hapless main character, Anastasia Steele, hovered constantly between signing her relationship contract or not. Whether it’s actually consensual or not is debatable; she doesn’t actually want the relationship, she just wants Mr Screwed Up’s approval. When she asks what she gets in exchange for pleasing him, he replies, “Me”. His emotional engagement with her is downright abusive. He is a cold, brutal and unpredictable narcissist, becoming churlish at the most insignificant perceived slight. Her fear, if she does not please him, is not for how many lashings she’s going to get on her quivering bottom; it’s abandonment and rejection.

The film, due for release on Friday, 13 February, worldwide, had some potential in terms of circumventing this fundamental disempowerment at the heart of EL James’ terrible, terrible writing, seeing that it had to, by nature, abandon her horrible prose. Some forward-thinking fellow in fact hired British screenwriter Patrick Marber to beef up the script, reports the Daily Mail – however, James – who is reportedly hideously precious over her writing (I prefer the term ‘typing’) insisted on throwing out his work and reinserting her own dialogue.

The result is a screen version of the equally dithery Steele – played by Dakota Johnson, daughter of Don Johnson and Melanie Griffith – and if anything, even more foppish Christian Grey, played by Jamie Dornan, who spends most of his screen time looking in desperate need of a Rennie. (This might be because he spends a great deal of his time nagging Ana to eat, and glugging down all sorts of treat-only dishes himself. He has food issues, Anastasia is at pains to explain, because of his horrible childhood.) Interestingly, from what I’ve seen we also see a great deal of Ana’s naughty bits, but the Holy Christian – whose penis is pretty much non-stop praised in the book – seems inordinately attached to his tighty whities on screen.

At one point, where Ana is introduced to Grey’s playroom, she nervously asks him if it’s where he keeps his Xbox. Never one to shy away from looking dark and brooding, he regards her with a devilish-yet-heartbroken Heathcliff-esque eyeball and (cue Jaws theme) tells her gravely – twice – that the helicopter can take her home at any time. Seriously? This is a woman who allegedly reads as a hobby and she’s never heard that some people get their jollies with a little leather? Come on. It’s bad enough that we’re expected to believe that she’s 21 and never taken a drink in her life, but this?

Disclosure: I haven’t watched the whole film and I double-dog dare you to judge me for it. I couldn’t drag my poor protesting eyeballs to the very end of the book, either. Life is too short. But Lord have mercy, I have seen enough.

Oddly enough, The Guardian gives the film a surprisingly positive review, framing it as a quirky love story – the age-old theme of girl-meets-bad-boy in a more sexually permissive era. Jordan Hoffman writes, “The sex scenes in Fifty Shades of Grey are numerous, lengthy and frank, but they aren’t smutty. Only occasionally does it dip into Red Shoe Diaries-territory. By and large, these key scenes really are there to advance the plot, and only the most buttoned-up prude will be scandalised.”

Not that this is untrue. My colleague Marianne Thamm, in her informal research on why women the world over have fallen over their feet for the fantasy of the quintessential fuckwit Christian Grey, told me that women have told her they identify with the rescue fantasy: Grey is a damaged creature, and it is the romance of gaining access to his cold, wounded soul that appeals far more than the kinky sex.

That I can believe. There’s also, I suspect, the unwritten identification that many women will have with the woman who feels invisible but who magically, mysteriously, miraculously is seen by this unfathomable, powerful man. Here’s the interesting thing, though: it’s precisely this – the suspicion that fans find more in the book than just the sex – that sets alarm bells ringing. My great criticism of Fifty Shades is a lack of dialogue around the characters’ dynamic, and fans’ rejoinder to this is usually that for Pete’s sakes, it’s soft porn, nobody’s in it for the dialogue. But I beg to differ. There’s a great deal of extraordinarily naff dialogue in both book and film, but in all the wrong places. Both focus their dialogue on the shock value of kink, when really, the dialogue should be around the negotiation of boundaries and establishing equality and growth within this unconventional relationship.

As Emma Green in The Atlantic put it, “People usually don’t pick up romance novels because they’re itching to read multiple pages of mature, sophisticated dialogue about feelings of vulnerability and personal boundaries. But if BDSM is going to be the new standard for hot—which Fifty Shades is helping it become—then that’s just the hard truth: Bondage, discipline, dominance, submission, and sadism are ‘varsity-level’ sex activities, as the sex columnist Dan Savage might say, and they require a great deal of self-knowledge, communication skill, and education. Fifty Shades eroticises sexual violence, but without any of the emotional maturity and communication required to make it safe.”

Negotiation, it goes without saying, which is either absent or poorly handled in Fifty Shades.

In this context, it’s frankly just plain shitty that Christian Grey is the worldwide female fantasy. He’s cold, controlling (personally, not sexually), bossy, doesn’t allow Anastasia her own opinions, controls her with coercion (her participation is not wholly consensual, and often characterised by fear and disgust), threatens her with abandonment and rejection, and controls her behaviour down to what she eats, for crying out loud. When he hits, ‘disciplines’ or rejects her, she frequently ends up in tears.

If Fifty Shades is here to stay, and its influence is going to be taken as the new sexual standard for women the world over, the film, one would hope, would be a slightly less verbose and tortured version of Ana Steele: less self-abuse, more sexy! Sadly, no. Reviewers globally are complaining that there’s an over-emphasis on the relentless back-and-forth between Grey and Steele, and not nearly enough sex. “Strictly daytime soap,” The Guardian called it, despite the otherwise positive review. “I thought there would be more bonking,” wrote News.com.au (actually, so did I); it’s “preposterous and brings little pleasure” opined the LA Times. “Kind of boring,” said AZCentral. Ah well.

* Not his real name