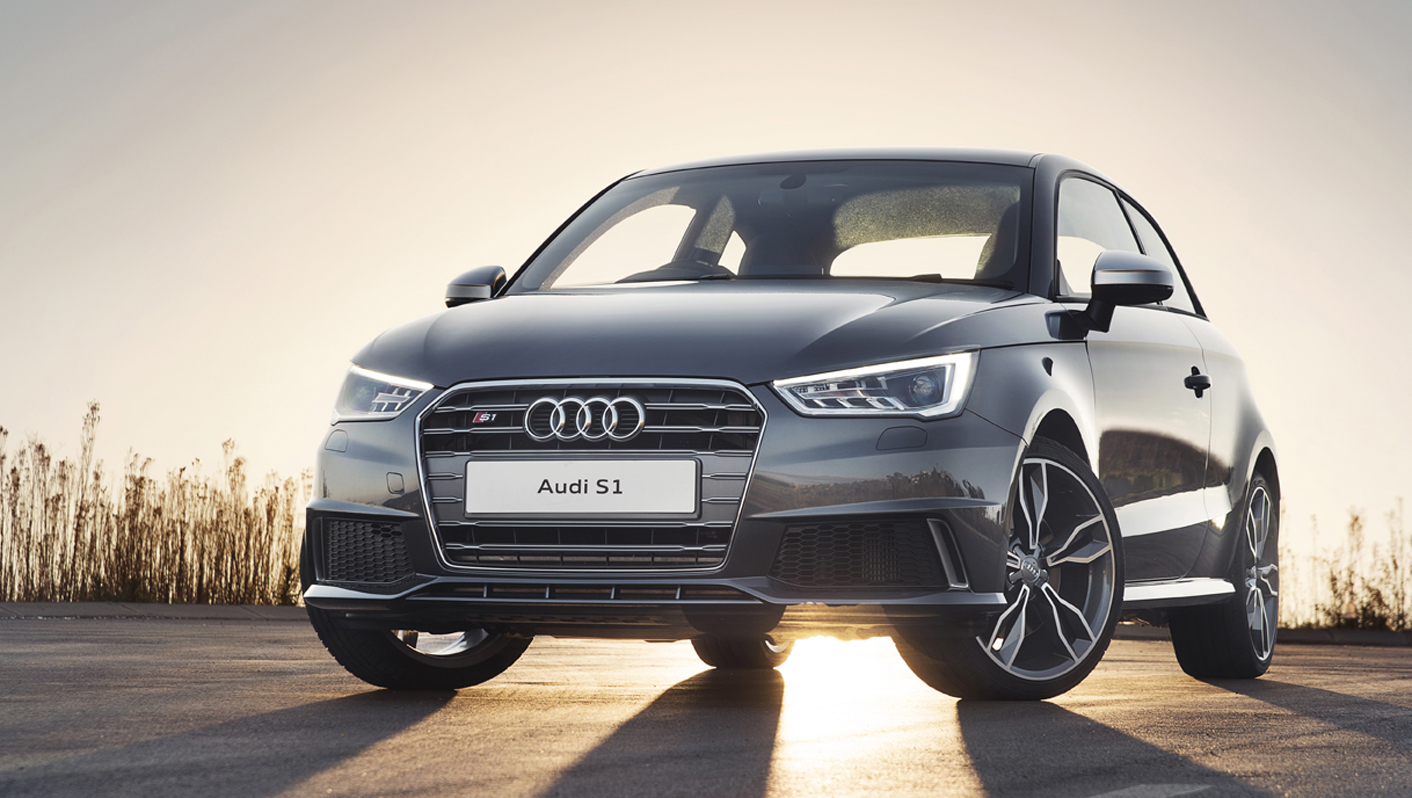 Audi’s S-cars are ubiquitous members of the Four Rings clan: sportier, rortier and certainly quicker versions of their bread and butter counterparts, if not quite as hard-core as the RS models. The only exception has been the A1 range, which has had to do without an S-model – until now. As DEON SCHOEMAN finds out at the Kyalami Grand Prix Circuit, it’s been worth the wait.

It’s taken Audi four years to create an S-badged version of its small A1 hatch. The new S1 is also the first subcompact car from Audi to offer Quattro all-wheel drive. And it reprises a badge worn by Audi’s World Championship-winning Group B rally cars in the 1980s. In other words, this should be a very special little car.

The technical complexities of shoehorning the Quattro all-wheel drive system into the A1’s compact form factor made it seem unlikely that an S-car based on the little hatchback would ever see the light. You see, in the world of Audi, S-cars and Quattro go hand in hand.

But then, the Ingolstadt automaker sprung a surprise by introducing a limited-run A1 Quattro in 2012. Packing a 188kW punch from a two-litre turbo mill, and featuring all-wheel drive, the special edition car was offered in left-hand drive only – but it did raise the hopes for an S-badged A1 model significantly.

Why did it take so long? Because the powers that be at Audi weren’t convinced that the extra cost (and therefore elevated retail price) of developing a Quattro platform for the A1 would be viable. The speed at which the limited edition A1 Quattro sold out must have convinced them otherwise…

There’s no mistaking the S1 as a member of the A1 family. But that said, it’s also different enough to turn heads. An all-new front end, complete with revised single frame grille and slimmer headlights, is the most eye-catching change.

However, in line with its S-car status, the S1 also gains a body kit with lower front splitter, larger air intakes, extended sills and a revised rear apron. The LED tail lights are also new – but perhaps the most telling detail is the presence of four, big-bore exhausts.

The standard wheels are 17-inch alloys, wrapped in 225/40 R17 rubber, but our images show the cars on optional 18-inch rims, which look more convincing.

As mentioned, the S1 can be had in three-door hatch and five-door sportback derivatives, and in visual terms, the latter looks more poised, more balanced, while the rear doors also boost practicality. By comparison, the three-door is the cheekier and slightly more juvenile machine – if you can call a small car with a R400k-plus price tag juvenile.

In both cases, the cabin is pure S-car, with bolstered sports seats, grey-faced instruments, a flat-bottomed multifunction steering wheel and alloy pedals. For some extra dosh, you can swap out the normal (and perfectly adequate) sport seats for a racier bucket seat that has a glossy composite seatback finished in yellow, red or black.

It certainly looks racy, but the seat is bulkier than the standard version, robbing the rear of precious legroom, and I’m not convinced that it’s more comfortable, or more supportive.

Let’s not forget that this is now the A1 flagship model, so the S1 also has most of the luxury kit you’d expect of a top-ender, including climate control, a colour display linked to Audi’s MMI infotainment system, Bluetooth connectivity – and more.

However, it’s not all good news – accommodation at the rear isn’t exactly generous, and the boot is tiny, thanks to the Quattro drivetrain. There’s also no spare wheel: South African buyers will get an emergency tyre repair kit, including sealant and a small compressor, to address roadside punctures.

The two-litre TFSI engine under the bonnet has been tweaked and fettled to deliver a very useful 170kW of maximum power. Granted, that’s less than the A1 Quattro’s 188kW, but it’s still a lot of muscle for a small car. The torque peak of 370Nm is more that the limited-run car’s 350Nm however.

The six-speed gearbox is the only transmission choice, meaning that fans of the S-tronic dual-clutch gearbox will be disappointed. But frankly, there’s something reassuringly old school about a good, meaty manual gearbox, and it suits the S1’s persona to a tee.

The Quattro all-wheel drive system at the heart of the S1 is Haldex multi-plate device that is front-biased in this application, meaning that it sends most of the engine’s urge to the front wheels during normal driving.

However, the system senses when the A1 is driven with more gusto, and starts feeding an increasing amount of power to the rear wheels in the interests of traction and stability. Torque vectoring can also vary the power between left and right wheels for added grip.

Fitting Quattro to the A1 has been quite a feat. It’s required the entire rear suspension to be replaced, and the result is that the S1 swaps the normal torsion beam set-up for a far more sophisticated (and complex) four-link independent configuration. That change plays a significant role in the S1’s dynamic character.

With a power-to weight-ratio of around 130kW/ton, and all four wheels hauling the hatchback along, the S1 is a strong little car, There’s no wheelspin off the mark, and the engine’s urge is on tap from the word go, sling-shotting the hatch towards the horizon.

The zero to 100 sprint time is 5.8sec for the three-door and a tenth of a second slower for the five-door sportback, but both cars will easily reach the 250km/h limit. However, while the straight-line stuff is impressive, it’s the handling that sets it apart from the A1 norm.

With Quattro all-wheel drive, you’d expect the S1 to feel planted through curves and corners, but that’s not only the reason. The electro-hydraulic steering is all-new, and delivers a lot more feel and feedback, while displaying decent heft. It allows the Audi to be piloted with confidence.

Of course, that independent rear suspension also plays a major part here, adding real finesse to the handling, so that the S1 always feels agile and responsive, even when braking late into a corner.

Understeer hardly ever comes into play, and turn-in is succinct and positive. The result is that the rear initially feels lighter and livelier than expected. However, it’s never at the expense of grip, and the S1 tracks the chosen line with precise neutrality that comes as a pleasant, confidence building surprise.

That’s a lot of tom for a small, fast car – and I wouldn’t be surprised if at least some would-be S1 buyers end up spending the extra R90,000-odd for the larger, more versatile and no less exciting Audi S3.

However, the S1 does exude a certain dynamic charm that’s irresistible – especially on a racetrack, where you can really extend the car, and explore its capabilities. So, if it’s a pure grin machine you’re after, and practicality isn’t a priority, the S1 deserves to be on your shopping list. DM