Long journey home: 74 Nigerian church collapse victims returned for burial – but will there be justice? 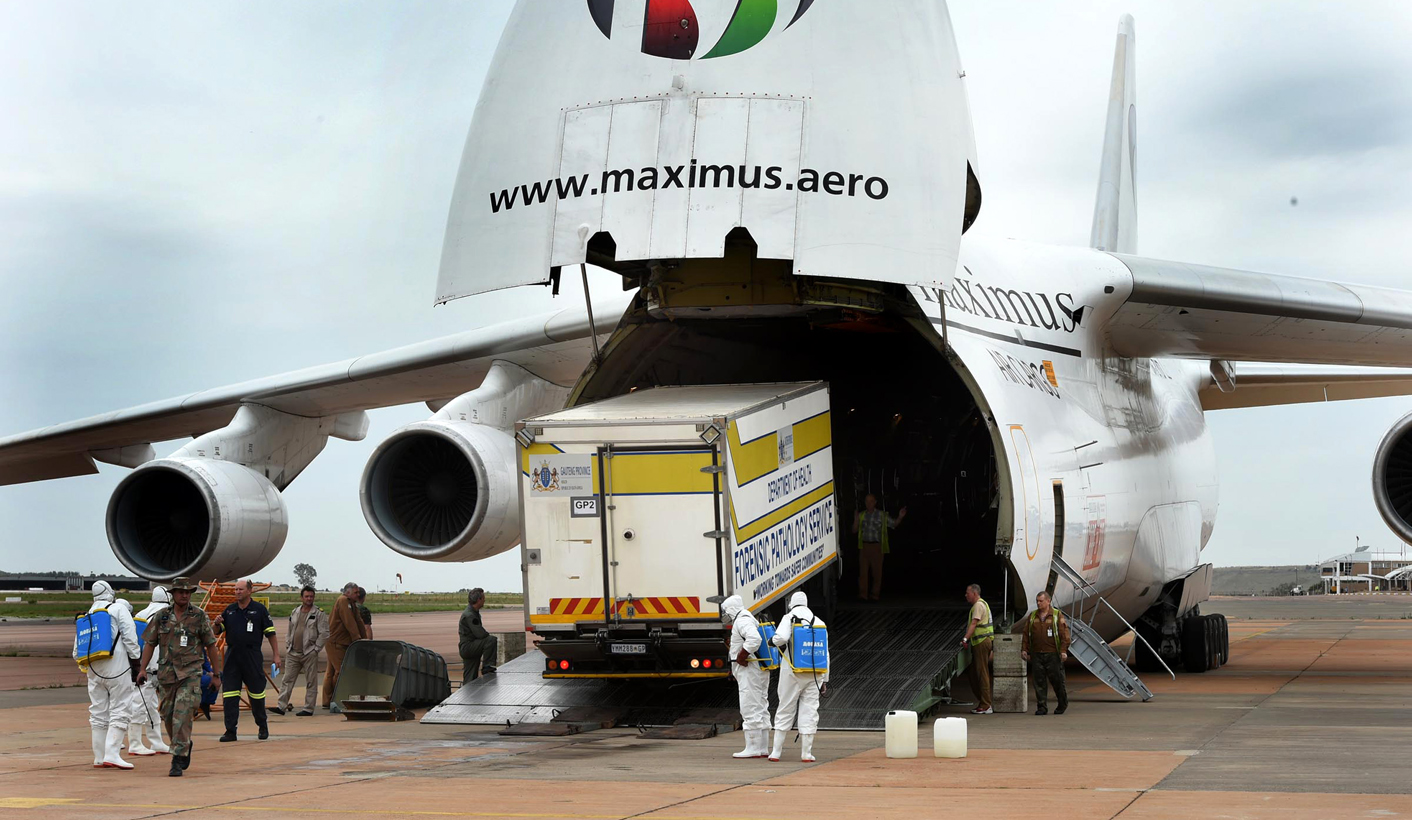 After more than two months of waiting, the bodies of 74 of the 85 South Africans killed in the collapse of a building at T.B. Joshua's Lagos Synagogue Church of All Nations arrived home on Sunday. Apportioning blame for the tragedy is the next shaky step. By GREG NICOLSON.

Deputy President Cyril Ramaphosa set a sombre tone on addressing the ceremony to receive the remains. Speaking to relatives of the deceased and a high-level government delegation at Waterkloof Air Force Base, Ramaphosa empathised with the families, humanised the victims, and lauded the state’s efforts to bring the bodies back after a guest house in the Lagos church collapsed.

“The people who perished in that tragic event in Lagos, Nigeria on 12 September were not mere statistics. These were people who lived among us. They are South Africans,” said the deputy president. “They are a part of us. These people were our colleagues and friends. They went to church with us. We worshipped with them. They were people who had hopes and dreams for their children. They were our compatriots and fellow South Africans. They were beloved wives, husbands, sons and daughters. They were our brothers and sisters. To the bereaved, we wish to say that, as a nation as a people, we share in your grief and sorrow.”

The bereaved can draw inspiration, said Ramaphosa, that South Africa has been grieving with them. “This is indeed a sombre moment for our nation. This tragedy has united us in grief. It has reminded us of our shared humanity.”

The state has been criticised for its handling of the matter, particularly in delaying the announcement of the building’s collapse and the length of time it has taken to bring the bodies home. But Ramaphosa said President Jacob Zuma, who was not at Sunday’s event because of the G20 meeting in Brisbane, and the state had done everything they could to return the remains to South Africa.

After the building collapsed, South African experts were sent to Nigeria to help identify the bodies. Recently, Minister in the Presidency Jeff Radebe led a task team of Cabinet members to discuss the return of the remains. South Africa and Nigeria are noted for having a competitive rather than collegial relationship but Ramaphosa said working together had helped bring the two nations closer. “In the aftermath of this tragedy, the people of Nigeria and South Africa have been united in loss and sorrow. This tragedy has reinforced the warm and fraternal relations between our two countries,” he said, thanking President Goodluck Jonathan.

After Ramaphosa’s speech, Presidency Director General Dr Cassius Lubisi read the names of each South African who died. Some relatives wept as he read out each name province by province: 12 from the Eastern Cape, 22 from Gauteng, two from the Free State, five from KwaZulu-Natal, 13 from Limpopo, 23 from Mpumalanga, six from North West, and two from the Western Cape. A moment of silence followed before the SAPS band played the death march and the bodies, which were kept in four trucks, were driven away under police escort.

Earlier on Sunday morning the the 74 bodies landed in Waterkloof; 11 bodies still need to be identified and repatriated, which Ramaphosa said would happen as soon as possible. The return followed meetings recently with Radebe, Nigerian government officials and Lagos State authorities. Once approved, a team of 87 left for Nigeria on Friday for the mass body repatriation. They included victim identification specialists, a chaplain to accompany the bodies, environmental health officers, forensic pathologists, emergency care practitioners for decontamination, and staff to lead the whole operation.

The state chartered two planes – a passenger aircraft for staff and an Antonov 124 cargo plane to carry eight vehicles and specialised equipment. Four of those vehicles were forensic pathology trucks designed for disaster situations. In Lagos the teams split across three mortuaries, with inflatable air-conditioned tents from the Military Health Service to increase available work space.

In transporting the deceased with the luggage they had brought to Nigeria, strict protocol had to be followed due to the potential health risks associated with the amount of time since the tragedy and the amount of remains being transported. The inter-ministerial task team on the issue has discouraged families from viewing the bodies.

Tragically, Radebe said a Department of Health worker, Pieter Fourie, who was working in Lagos to assist with bringing the remains home, contracted malaria and died on Friday.

Sunday’s emotional reception was a reminder of the drawn-out grieving process for the families as they have had to wait over two months to bury their loved ones. Last month, Ramaphosa told the National Council of Provinces that South Africa-Nigeria bi-national commission had not yet convened, but SA’s high commissioner was engaged with the Nigerian government. A private laboratory in Stellenbosch was conducting DNA sampling to identify the victims, he added.

South Africa, he replied to questions, must diplomatically respect foreign countries’ sovereignty and maintain cordial relations. “The South African government will not be able to parachute itself into Nigeria and extricate the mortal remains of those who perished.”

South Africa is not participating in the Nigerian coroner’s inquest into what happened at the Synagogue but has said it’s ready to help if asked. The inquiry is off to a shaky start as T.B. Joshua has resisted requests to appear, reportedly because he didn’t receive the summons personally. It’s also reported the contractor handling the project for the collapsed building also failed to appear.

Instead of appearing at the inquiry, Joshua released a song dedicated to those who died. He has called them martyrs and the song “Heaven is Our Home” essentially asks why people die too soon and answers, “Heaven is our reward… Heaven knows, heaven is our home… We long to be there. We long to be home.”

The 74 bodies that arrived on Sunday will be taken to their respective provinces for the families to finally hold funerals. DM

Photo: The bodies of 74 South Africans killed in the Nigeria church collapse arrive at the Waterkloof Air Force base in Pretoria on Sunday, 16 November 2014 just over two months after the incident. Picture: Department of Communications (DoC)/SAPA