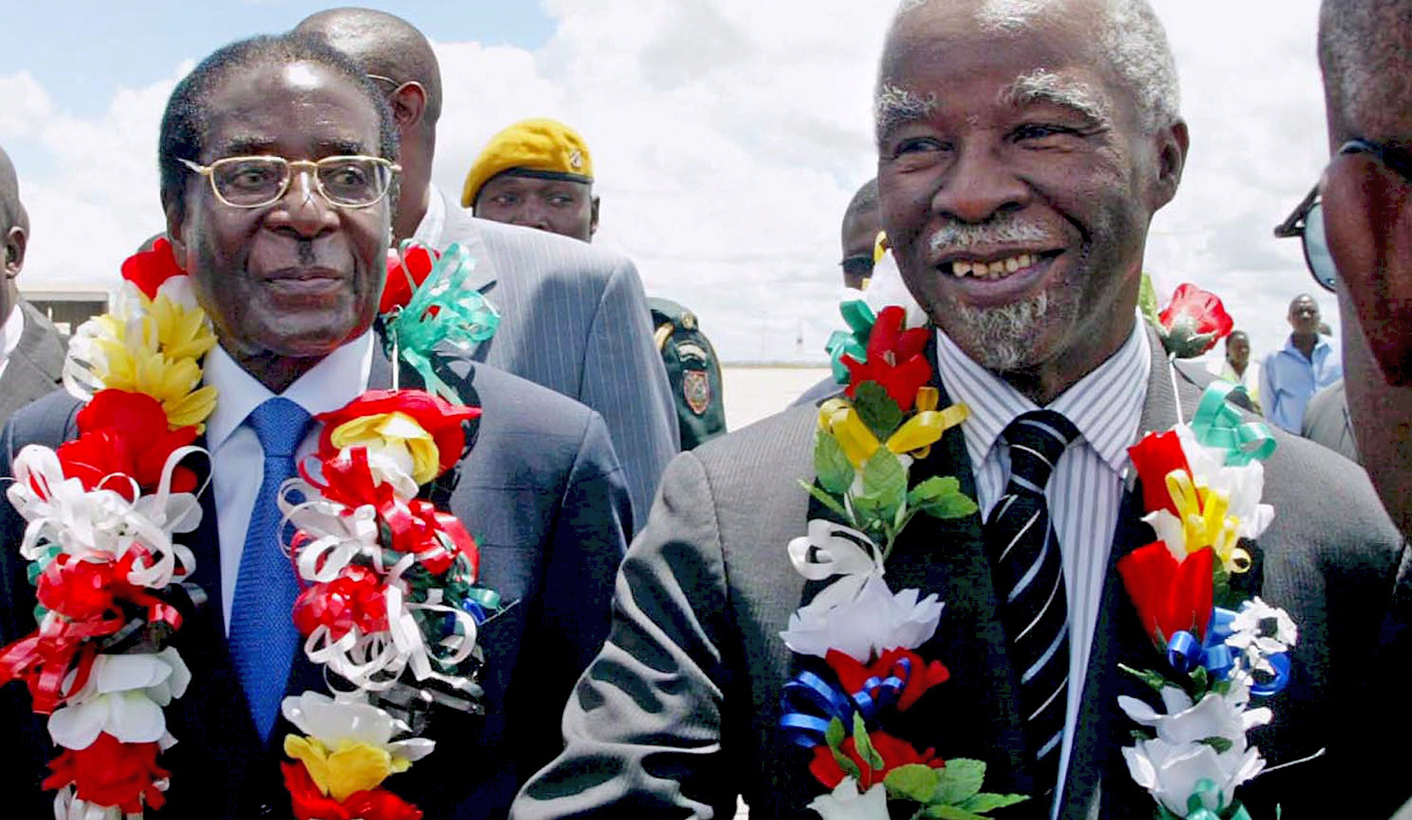 For more than 12 years, the South African government fought to keep the contents of the Khampepe Report under wraps. Finally, they failed, and the details of a damning cover-up were revealed: Zimbabwe’s 2002 elections were rigged, and South Africa knew all about it. Zimbabwe has been paying the price for this ever since. Now it’s South Africa’s turn. By SIMON ALLISON.

There is nothing new or particularly revelatory about the contents of the Khampepe Report, the South African judicial review of Zimbabwe’s 2002 presidential election. Of course the vote was skewed in Zanu-PF’s favour. Of course the spate of violence which preceded the poll was related to it, and was designed to intimidate the opposition. Of course Morgan Tsvangirai and his Movement for Democratic Change didn’t get enough airtime on public broadcasters. Of course Robert Mugabe fiddled with electoral laws and the voters’ roll to exclude or weaken unfriendly constituencies.

These are all pretty standard tactics in the handbook of any president-for-life, and Mugabe is a master of that particular dark art – as he proved again in the two subsequent presidential elections, which both ended with himself remaining firmly ensconced in his opulent presidential residence.

Still, it is unusual – unprecedented, even – to see anyone connected with the South African government reach the same conclusions, especially so unequivocally. “However, having regard to all the circumstances, and in particular the cumulative substantial departures from international standards of free and fair elections found in Zimbabwe during the pre-election period, these elections, in our view, cannot be considered to be free and fair.”

Such was the verdict of judges Sisi Khampepe and Dikgang Moseneke, both highly respected legal minds (Moseneke has gone on to become the Deputy Chief Justice of the Republic of South Africa). It was delivered at the behest of then-President Thabo Mbeki, who sent the pair – at taxpayers’ expense – to Zimbabwe to observe the vote and its prelude.

Yet taxpayers have had to wait more than 12 years to view the report’s contents. That we can do so at all is entirely thanks to the Mail & Guardian and its dogged legal team, which spent more than six years (and a considerable amount of money, one suspects) demanding access, initially through the presidency and then the entire gamut of the judiciary. Eventually, on Friday 14 November, the Constitutional Court ruled in the paper’s favour, and the report was released and made public by the Mail & Guardian that same day.

Despite the common sense nature of the judges’ findings it is obvious why the executive branch of the South African government fought so hard to keep it under wraps. Common sense, unfortunately, has not always been part of South Africa’s policy towards Zimbabwe, especially when it comes wrapped in such blunt language.

In fact, the Khampepe Report entirely discredits that of the 50 person-strong South African Observer Mission (SAOM), which reached a rather different conclusion: “[It] is the view of the SAOM that the outcome of the 2002 Zimbabwe presidential elections should be considered legitimate,” the observer mission told reporters shortly after the vote.

So how did Thabo Mbeki’s administration reconcile these two very different conclusions, both reached by their own representatives? Well, that’s exactly the problem. The politically unhelpful Khampepe report was buried, while the SAOM position was adopted as the official government position. That the Khampepe Report has now come to light is a humiliation for Thabo Mbeki, and casts serious doubt on his credibility as a senior African statesman.

It also may well have altered Zimbabwe’s future. Counter-factual speculation is a largely pointless exercise, but it’s clear the Mugabe and Zanu-PF needed South Africa’s endorsement at the time to sell the result to a skeptical electorate. It also soured relations, permanently, between South Africa and Zimbabwe’s opposition.

“We knew about all the irregularities and that there was a cover up,” said David Coltart, former education minister and a founding member of the Movement for Democratic Change, in comments to the Daily Maverick. “We had very good contacts within the ANC at the time who confirmed that the reason the report had not seen the light of day was because it was so damning. It strained our relationship with Mbeki and in many ways was a contributor to Tsvangirai being so suspicious of Mbeki later, especially in 2005 when the split in the MDC occurred. Accordingly when Mbeki tried to assist when the MDC split he was viewed as a dishonest broker by Tsvangirai.”

But these damaging revelations are not, however, why Mbeki, and after him Kgalema Motlanthe and Jacob Zuma, fought so hard to keep the report under wraps. Few politicians are immune to hypocrisy, and Mbeki could have – and indeed will – ride out the storm and probably emerge with his reputation largely intact. Nor would there be much incentive for Jacob Zuma to invest any political capital in protecting Mbeki’s reputation. If anything, the current president might have relished the chance to damage Mbeki’s legacy in the foreign policy arena, which is one field in which Zuma has always struggled to compete with his predecessor.

But there was more at stake than just a reputation, or even the historical record, which will surely now reflect the fact that Zimbabwe’s 2002 election was rigged and that South Africa knew all about it. What was really at stake is the future of South African diplomacy, which has just suffered a crushing blow to its credibility.

South Africa’s economic muscle, combined with our strong democratic record, puts us in a unique position when it comes to observing elections in Africa. We have the power to confer legitimacy upon leaders; we have the power to give an internationally-recognized seal of approval to otherwise dodgy results.

And we use that power. President Joseph Kabila, for instance, was reported to have used the full powers of the state to keep himself in office in the Democratic Republic of Congo in 2011. Despite those election results being discredited by most international observers, a South Africa-led SADC observer mission praised the poll as “successful” – a verdict which Kabila used to brush off legal challenges from his main opponent.

In fact, in recent years, no South African or SADC observer mission has seriously questioned the results of an African election, despite witnessing polls in places with high political tensions and little democratic track record. Is this because democracy in Africa is improving? Or is it simply because South Africa is choosing to ignore or cover up any irregularities?