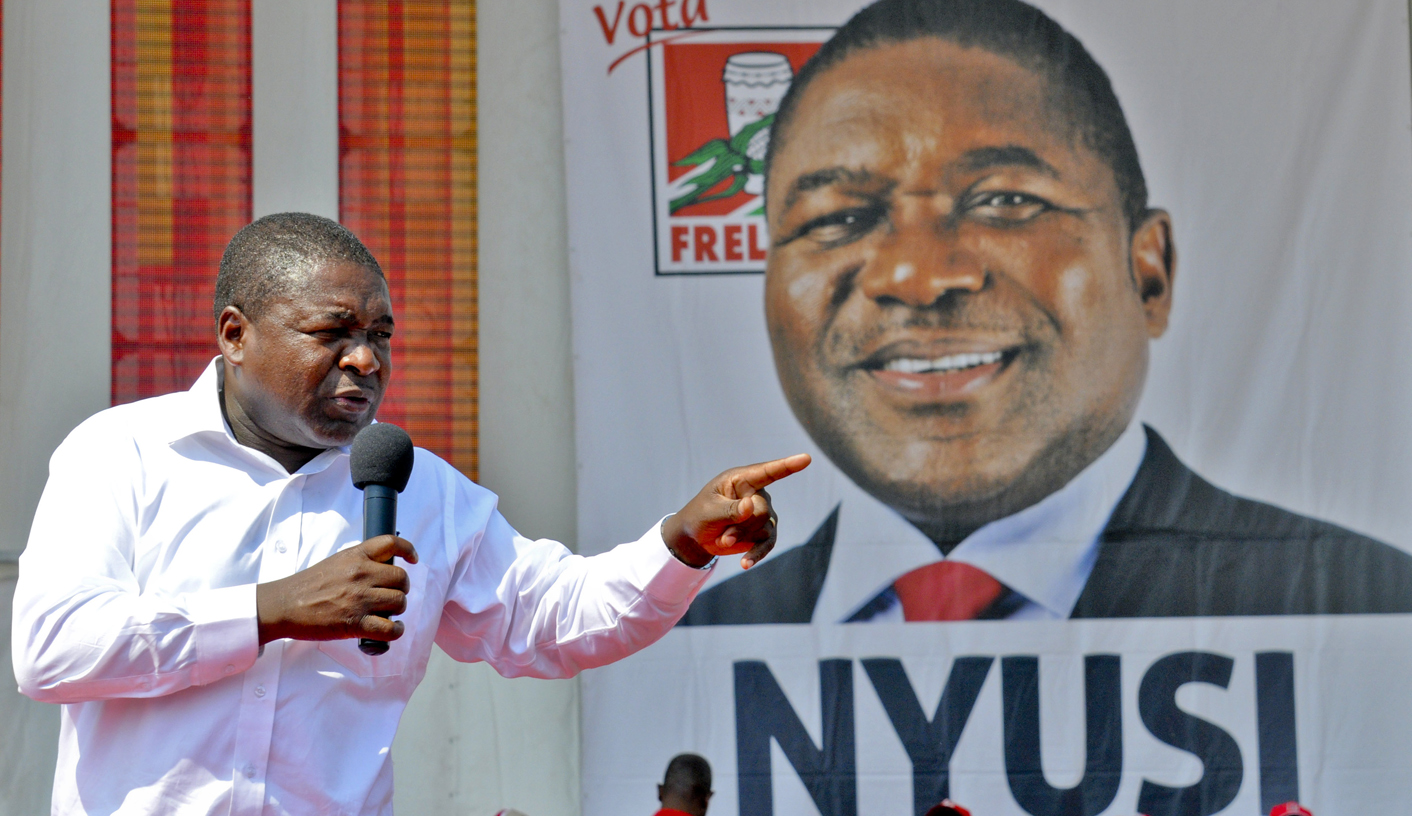 As Mozambique prepares to go to the polls on Wednesday, a small army of citizen reporters are gearing up to make sure the process is free and fair. Their work is not easy, and rarely welcomed by the powers-that-be, but is an essential safeguard of the democratic process. By MERCEDES SAYAGUES.

A few snapshots from the presidential election campaigns in Mozambique, all from the last two months:

This news goes into the CIP website and into a news bulletin faster than any other news outlet, even giant radio Mozambique. Media pickup is immediate. The Constitutional Council and electoral authorities read it. In many ways, the electoral reporting project sets the media agenda.

With 150 reporters, at least one in each of Mozambique’s 143 electoral districts, its on-the-ground coverage maps out flash points and trends. The reporting has exposed flagrant misuse of state bureaucracy and resources to promote the ruling party.

When Frelimo candidate Filipe Nyusi campaigned in Lichinga, in Niassa province, teachers absconded to attend the rally. In Sofala and Nampula provinces, nurses and teachers skipped work, with or without permission, to help Frelimo’s campaign.

The project, led by CIP head and researcher Joseph Hanlon, started during the 2013 municipal elections, in collaboration with the Electoral Institute for Sustainable Democracy in Africa (EISA).

From day 1 it proved its value: way before the electoral commission received official complaints, correspondents across the country reported that many printers sent to polling stations were not working. Quickly, the commission told the South African supplier to solve the problem.

When the official vote count in Gurue, in the north, was suspiciously different from the parallel counting of the electoral observatory, and the opposition complained, the election bulletin circulated both tallies. This boosted the complaint’s credibility and led the Constitutional Council to order a new poll, which the opposition MDM won.

The reporters work for local papers and community radios, so they have experience in collecting information, although many lack formal journalism training.

Mozambican media, although lively, are aligned to political parties or a platform for the publisher’s views. Independent journalism, based on facts and research, not on opinion, is scarce. In 2013, CIP and EISA trained the reporters in electoral law and the basic rules of journalism – accuracy, confirmation, facts instead of opinion.

Equipped with a user-friendly manual written by Hanlon, they learned to spot irregularities, to identify sources (although CIP may protect their identity) and to double-check, not to take rumours for fact.

This is how Hanlon sums it up: “We hammer into the heads of all our journalists that allegations must be backed up. Perhaps the hardest for Mozambican journalists is the rule of information, not rhetoric. Let the facts speak for themselves. And don’t just report the problems, report normality and success.”

Back in Maputo, the CIP team scrutinises the information before publishing it, earning trust for its product.

In rural Mozambique, where media presence is tenuous and administrators and police chiefs run their districts like fiefdoms, (for example, in 2013, without a court order, on a whim, an administrator ordered police to padlock the community radio station because it reported on local corruption), assuming that “Maputo will never know and people here are docile”, the electoral reporting project is telling local authorities they are being watched, and that the nation will know about irregularities.

This year, reporters noted fewer government cars being used openly by Frelimo than in 2013.

That was a tight election. Renamo boycotted it. MDM got 40 percent of the total vote, won two cities in the first round (Beira and Quelimane) and two (Nampula and Gurue) after flawed counts and new elections. In Maputo and Matola, Frelimo strongholds, MDM won over 42 percent of the vote.

However, 2014 is a different game. Renamo is participating, which splits the opposition, and could make results even more contested.

The reporting project is part of a broader effort by civil society to ensure free and fair elections, and shake the voter apathy creeping into the country’s voting population since the first democratic polls in 1994. Less than half of eligible voters voted in 2013. Those that do go to the polls should at least know their vote is not being tampered with, and that the election has been free and fair. In a country with not enough safeguards in place, active citizen reporting is one of the most effective ways to guarantee this. DM

Photo: The Frelimo party candidate for the presidential elections, Filipe Nyusi (C) delivers his speech during a rally on the last day of campaigning in Maputo, Mozambique, 12 October 2014. EPA/ANTONIO SILVA