Analysis: Occupy Hong Kong is about preserving the stat...

Analysis: Occupy Hong Kong is about preserving the status quo 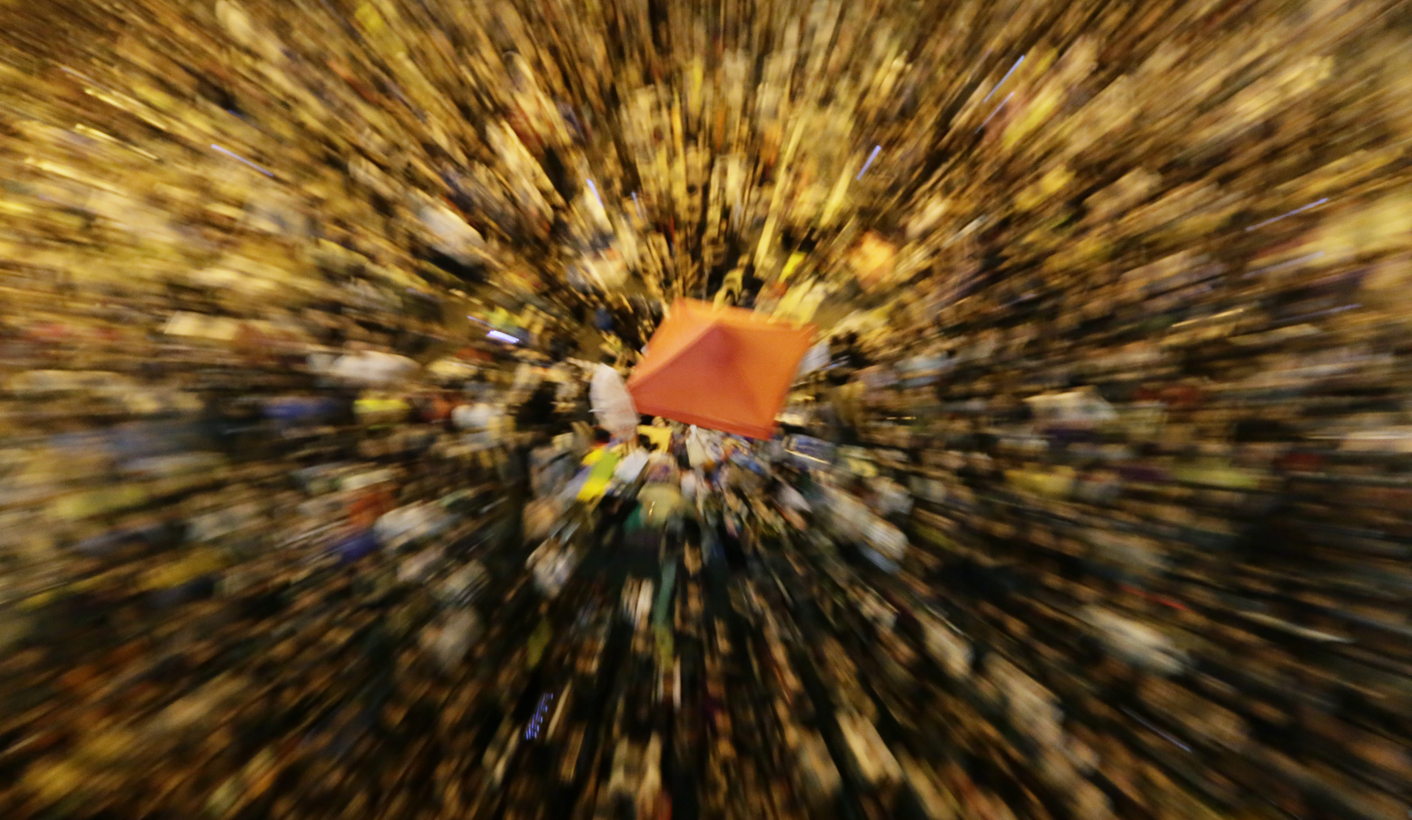 No, Occupy Hong Kong won’t get what it’s asking for. The tens of thousands of protestors, gathered under their umbrellas, aren’t going to get any real democratic reforms. But they will make Beijing think twice about rolling back any of Hong Kong’s unique freedoms in the future – and that is really the point. By demanding change, the protestors are protecting the fragile status quo. By SIMON ALLISON.

There are a great many quotes attributed to Deng Xiaoping, the Chinese leader who almost single-handedly rescued the country from the depths of Mao Zedong’s rule and laid the foundations for modern China. They’re not all his: some are mistranslations, some are apocryphal, but the late Margaret Thatcher insists that this one is true.

While the pair was negotiating over the future of Hong Kong in the early 1980s, Thatcher said that Deng told her bluntly: “I could walk in and take the whole lot this afternoon.”

He was right, of course. Hong Kong’s extraordinary prosperity has always been matched by its fragility, its vulnerability as the most valuable pawn in a high stakes game of empire-building. The city itself is a creation of the colonial era, its safety long-dependent on the might of the British navy and its world-conquering ambition. But when the empire died, Britain could no longer afford to protect and maintain this glittering outpost. British Hong Kong existed at the pleasure of China’s central government, and that pleasure had a time limit: 1997, when the agreement ceding the territory to Britain expired.

Since then, not all that much has changed. The British Governor has been replaced by a Chinese Chief Executive, the title illustrating Hong Kong’s real worth as a place to do business and make money, lots of it. There have been minor clampdowns on free speech and dissent, but by and large the city has been left to its own devices, granted significant leeway under the “one country, two systems” approach adopted by China. For the most part, Hong Kong is still unashamedly outspoken and unabashedly capitalist.

But the spectre of mainland China looms large. Hong Kongers know that, if it wanted to, China could still walk in and change things overnight; it could incorporate Hong Kong into China proper with a flick of a legislative pen, and force Hong Kong to play entirely by its rules.

Understanding this is vital to understanding the massive pro-democracy protests in Hong Kong’s main business districts this week. Foreign journalists have been keen to draw parallels to Tiananmen Square, or to the Arab Spring revolts (side note: look how well those turned out), but this misses the point.

Occupy Hong Kong isn’t about more democracy and freedom in Hong Kong. That’s a pipe dream. China simply cannot allow Hong Kong to choose its own leaders freely, as the protestors are demanding. Not only would this mean a significant loss of control over Hong Kong, but it would also send a dangerously subversive message to the rest of China that change is possible and that mass protest and civil disobedience is the way to make it happen.

The tens of thousands of men and women on the streets – risking their jobs, braving tear gas and detention – know this. They’re not stupid. But they’re not out there for change. Instead, they’re marching for the status quo – to preserve the rights and freedoms they already have, to protect those against further encroachment from a Chinese state that they fear is slowly eroding Hong Kong’s political foundations.

This fear is only partly justified. Oddly, these protests were sparked by China’s decision extend rather than restrict voting rights, allowing universal suffrage in the election of the Chief Executive by 2017. The catch is that candidates for the position must be nominated by a special nominating committee. That nominating committee is appointed by the Chinese government. In effect, Hong Kong can vote, but only on candidates pre-approved by Beijing.

This, however, is still an improvement on the current situation, which is exactly the same except only members of Hong Kong’s legislative council can vote. Nonetheless, the Occupy Hong Kong organisers argue that this is still a breach of the spirit of the post-1997 agreement, which they thought would eventually lead to genuine self-determination. But is it really?

“Clearly, the PRC’s envisioned terminus (the “ultimate aim”) of the democratic reform line is universal suffrage to vote for candidates put forth by a nominating committee, not universal suffrage in the nomination as well as election process, which is the Occupy Hong Kong movement’s demand,” argues regional academic Peter Lee on Asia Times, after reviewing the relevant legislation and political statements.

“If the PRC government revised, promised to revise, or hinted it would revise this understanding to do away with its most important tool for controlling electoral politics in Hong Kong, the nominating committee, please let me know. Until then, I will regard the ‘China reneged/broke its democracy promise’ line as a canard peddled to provide unnatural enhancement to the legitimacy of the Occupy movement,” Lee concludes.

Canard or not, it’s a powerful argument, and plays into western stereotypes about modern China. And this is where China must be careful. Responding to Deng Xiaoping’s threat, Margaret Thatcher told him exactly why he would not order a unilateral invasion. “There is nothing I could do to stop you,” she said, “but the eyes of the world would now know what China is like.”

It was a perfect response, and just as relevant today as it was then. Hong Kong’s importance to China is not just as an economic hub, but as an example to the rest of the world that Chinese rule can be relatively restrained and benevolent. It too, is invested in maintaining the status quo, as its reaction to Occupy Hong Kong has demonstrated: it has offered high-profile support to under-fire Chief Executive Leung Chun-ying and Hong Kong police’s handling of the protests so far.

Occupy Hong Kong is unlikely to elicit any substantive change or reform. But to be a success, it doesn’t need to – it just needs to draw a line in the sand that makes it clear just how much interference Hong Kongers can tolerate from Beijing. The protests will make Beijing think twice before attempting to roll back any of Hong Kong’s unique rights and freedoms, if indeed Beijing has any intentions of doing so. For now, the status quo – fragile as it is – might just suit everyone. DM

Photo: A zoom in lens effect image of Pro-democracy demonstrators gather outside Hong Kong’s government offices on the fourth day of the mass civil disobedience campaign ‘Occupy Hong Kong’, in Admiralty, Hong Kong, China, 01 October 2014. Protest leaders clarified their ultimatum for the Hong Kong government, after pro-democracy demonstrators turned their backs on a Chinese flag-raising ceremony on National Day. ‘If he doesn’t resign by tomorrow we will step up our actions, such as by occupying several important government buildings,’ said Lester Shum, vice secretary of the Hong Kong Federation of Students. EPA/DENNIS M. SABANGAN